One of the shockers which reverberated around the PalExpo halls this SIHH was the news that Panerai had introduced a watch which came with a 50 year warranty. Immediately, the antennae went up…publicity stunt. Especially when the 50 year warranty is coupled with a limited edition of 50 pieces and priced at € 50,000. But when we got our one-on-one hands on with the Panerai LAB-ID Luminor 1950 Carbotech™ 3 Days PAM00700 , we were pleasantly impressed.

Among the various Luminors introduced this SIHH2017, we were particularly attracted to the Panerai LAB-ID Luminor 1950 Carbotech™ 3 Days PAM00700.  The PAM00700 certainly looks impressive. The girth of a 49mm diameter case is one which evokes presence. But also the watch, as we handled feels very light. No specifications are published on the weight, and at the show where examined the watch, we did not have the benefit of a weighing scale. But the case feels very light. Not quite Richard Mille RM27-02 light, but lighter than most watches. The Panerai LAB-ID Luminor 1950 Carbotech 3-days 49mm.
Photo note, each Carbotech case has unique patterns, and has the interesting ability to pick up surrounding light hue, subtly changing its own colour based on lighting conditions. Here, it looks a bit warm, but in regular sunlight, it is a dark grey.

Panerai’s use of Carbotech as a case material is not new. Panerai introduced this in 2015 with the PAM00616 (click here for our full review). So why does this watch carry the LAB-ID moniker, which is Panerai-speak for envelope pushing technology? Well, there are some key developments to deserve the LAB-ID tag. First off the special carbon nano-tube dial, which is claimed to be the darkest dial in the market. More of this later. And the use of a full carbon movement – the C. 3001/C. And to show Panerai’s confidence in this new tech, they offer a 50 year warranty. Interesting stuff. 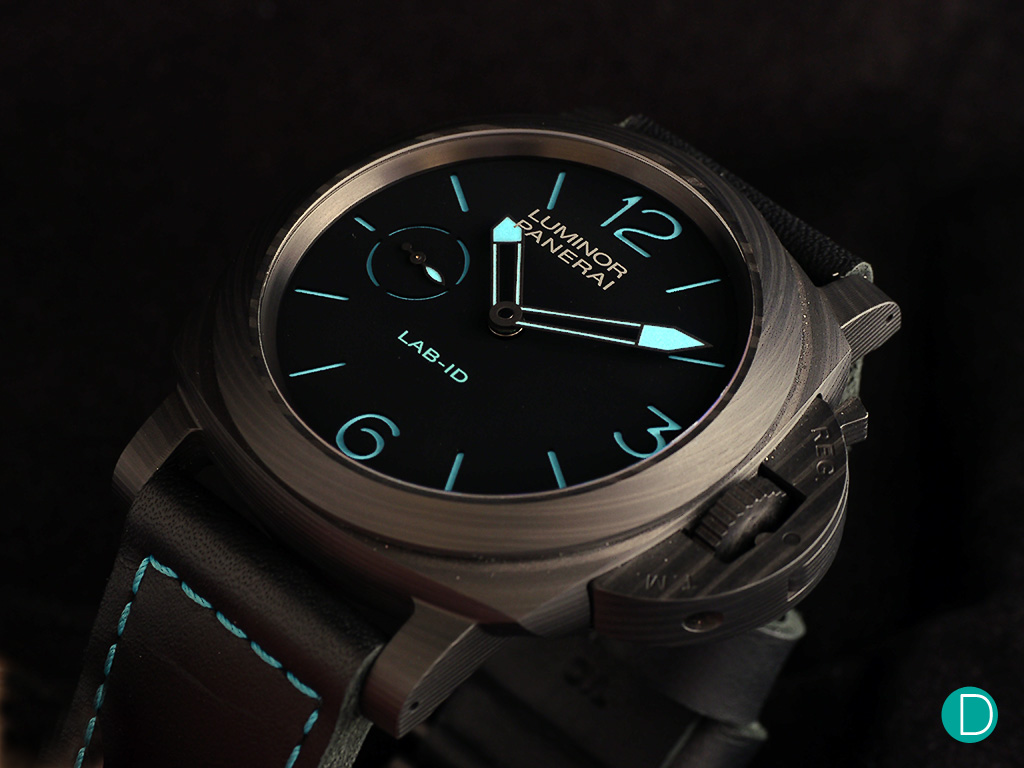 The PAM00700, under a different light condition, looks a cold grey. The deep dark dial still stands out, and makes the lume look bright and strong.

The case, dial and hands (where some of the magic happens)

As mentiond, the case is made of Carbotech. But Panerai first used this in the PAM00616 reviewed earlier.

Carbotech, a special layered carbon fibre material unique to Panerai watches is not cold to the touch like a metal case. The texture one sees on it is unique to each, as the material is laid up as thin sheets of carbon fibre, compressed in a controlled temperature under high pressure with PEEK (Polyether Ether Ketone). The resultant material is a composite which has exceptional characteristics in strength and durability. And within the structure, the mechanical properties of Carbotech are higher than ceramic or titanium, is hypoallergenic and not subject to corrosion. The Panerai literature is not clear how the material is made, but with our un-scientific method of physical inspection with the naked eye, the Carbotech material looks very similar to the NTPT Carbon material used by Richard Mille. NTPT describes their material as thin ply prepreg carbon, where carbon layers are laid at an angle to each other with prepreg resin between the sheets in a controlled environment. This results in the swirls and patterns on the material when cut, and shows up on the TPT Carbon. And Carbotech cases. Panerai PAM00700. Simple, but the tech is more than meets the eye.

As a result the Carbotech case is unique. Each with its own swirl and pattern. And as noted in the photograph captions, can appear to have a different hue depending on lighting.

The dial is quite interesting, and perhaps a bit controversial. The dial is coated with a layer of carbon nanotubes making it look ultra black. The nanotubes are also extremely fragile, preventing any prints on it. The Luminor Panerai markings are printer on the underside of the crystal which has anti-reflective treatment on both sides. And the dial markings are the lower sandwich layer showing through the piercings on the upper layer.

The PAM00700 dial is made of a special carbon nanotube. The material absorbs almost all light falling on it, and appears a deep, deep black.

Panerai claims the dial on the PAM00700 to be the darkest in the industry. Another independent brand, MCT also makes the same claim. MCT uses a special paint called Vantablack (Vertically Aligned NanoTube Array black). This material is commercially available, but is the exclusive use for artistic applications to the artist Anish Kapoor whom MCT licenses the use from. Panerai executives told us that they considered the use of Vantablack, but felt that they can develop a better alternative. NASA has developed a similar material in their labs, and Panerai claims that they developed a material of carbon nanotubes which appears equal or even blacker than Vantablack.

Panerai does not describe how they produced their material, which they also did not name. But the press material’s description of the material itself sounds very similar to Vantablack.  Vantablack is a carbon nanotube material, developed by the National Physical Laboratory in UK, and now commercialised by Surrey Nanosystems. Vantablack is composed of a forest of vertical tubes which are “grown”. When light strikes Vantablack, instead of bouncing off, it becomes trapped and is continually deflected among the tubes, eventually becoming absorbed and dissipating into heat. Surrey claims it to absorb 99.965% of visible light. The dial of the Panerai PAM00700 uses two colors of SuperLuminova over an ultra black dial.

We have no way to verify if the Panerai dial is indeed darker than the MCT Vantablack equipped dial, but the Panerai’s carbon nanotube coated dial looks really deep black from our visual inspection. Panerai also states that their nanotube material is extremely fragile, and for that reason, the Panerai Luminor nomenclature is printed on the crystal instead of on the dial. The dial of the PAM00700 itself is a classical Panerai sandwich dial, where the dial is pierced to show the lower sandwich of SuperLuminova. The appearance on the ultra black dial witht he SuperLuminova shining through is stunning. The display looks very strong and bright making for a very highly legible dial.

The movement: P.3100/C (where more magic happens. Do you self-lubricate?) Case back of the PAM00700, showing the C3001/C movement.
Note that there are no jewels on the pivots of the wheels.

A hand, coated with SuperLuminova shows the power reserve.

The movement is also very technically interesting in that it is made of carbon, and appears black. The movement does not use any liquid lubrication at all. Liquid lubrication is the bane of conventional movements, requiring attention once every 5 to 10 years. By eliminating it altogether, Panerai is able to offer the P.3001/C with an ultra long warranty.

The parts which traditionally require lube is made to be either self-lubricating or to ustilise dry lubrication. The main bridges and the plates are made of a new low friction composite which integrates a tantalum based ceramic. This new material is notable for a high percentage of carbon and minimises pivot friction, making jewels and their related lubrication unnecessary.

The escapement is made of silicon, which does not require liquid lubrication. The wheel train has a DLC coating for the same reason.

Panerai made comprehisive tests with the Laboratorio de Idee to identify the best carbon based coating in which to treat the components of the two spring barrels of the P.3001/C so that it also does not need conventional lubrication. The barrels use a series of layers and sub-layers of carbon based coating and finally coated with DLC.

And the jewels on the Incablock shock resistance system is also coated with DLC to ensure that it too does not require lubrication. The carbon bridges are skeletonised, and the DLC coated brass wheel train shows up in this photograph with very good contrast.

The balance wheel is quite large at 13.2 mm in diameter, fixed by a bridge with twin supports and oscillating at a frequency of 3 Hz, and is equipped by a device which hacks the balance and resets the seconds hand to zero.

Movement finishing is unconventional. The traditional finnisage of haute horogerie does not apply. The bridges and plates appear to have chamfered sides, but these are not applied by hand as the bridges are made from carbon. However, as we understand it, carbon plates also do require a significant amount of hand work, though not traditional watchmaking styled handwork. The bridges are all very even and regular. The fact that the movement does not have any jewels also make for a striking visual, the black plates and bridges contrasting with the bright wheels and the power reserve indicator.

Interesting watch this PAM00700. The use of material is innovative and makes this watch quite appealing. The Carbotech case is nice. As is the ultra black carbon nanotube dial is stunning. Especially when used in the traditional sandwich Panerai dial with SuperLuminova on the lower sandwich shining through. And the very exciting use of technology in the attempt to eliminate liquid lubrication from the movement is admirable. The P3001/C movement deserves kudos for taking the steps to introduce new tech. Not just any tech, but good tech. Tech which eliminate the need for liquid lubrication, which has been the bane of mechanical movements since time immemorial. Could this be the brave new world, where watch movements do not need conventional lubrication? We can only speculate, but that would be a good future. On the wrist, the 49mm is not as imposing as it sounds. It feels rather comfortable on the author’s wrist.

But naysayers will be negative. They say Panerai can offer the 50 year warranty because they only offer the PAM00700 as a limited edition of only 50 pieces. And charge a hefty € 50,000 for it. But we say, bravo to Panerai for taking this step to embrace new tech. And perhaps one day, all watches will be made like this, and ultra long warranties become the norm.