We know only very few bronze chronograph divers and Oris Carl Brashear Chronograph Limited Edition is one of the perhaps one of the most spectacular.

The story of Oris starts in the small town of Hölstein, Switzerland. In 1904, Paul Cattin and Georges Christian buy Lohner & Co watch factory and start a contract with the town’s mayor.

The brand quickly became famous for their Big Crown Pilots watches. The brand continued to make interesting watches, in fields like diving, motorsport and also in aviation. More about brand’s history is found in our review of the original Oris Regulateur “Der Meistertaucher”.

The watch we review today is a bronze diver with chronograph dedicated to Carl Brashear. Under the motto, “You can’t keep a good man down“, Oris celebrates the legacy of the legendary US Navy Master Diver. Carl Brashear was born in 1931 in Kentucky, USA. He joins the US Navy in 1948 and graduated from the U.S. Navy Diving & Salvage School in 1954, becoming the first African-American to do so.

In 1966, during a salvage mission, known as the Palomares incident, a B28 nuclear bomb was lost off the coast of Palomares, Spain. During the operation, Carl had an accident which resulted in the loss of the lower part of his left leg. His leg was amputated, but he persevered. And two years later, he becomes the first amputee diver of the U.S. Navy. Carl Brashear continued to serve in the Navy and became the first African American Master Diver in 1970. He retired from the Navy in 1979, after more than thirty years in service. Carl Brashear is an example of passion and determination. His dream of becoming Master Diver encountered many hurdles. His handicap, racism and the harsh work conditions didn’t stop him to be a successful diver. His life is an example for all of us, his story is a legend. Image courtesy of Oris.

Carl Brashear died in 2006. His work and determination remain as a symbol of success in the face of the obstacles. Oris created the Carl Brashear series in his memory. And the latest addition to this collection is the Chronograph. The watch features its case, bezel, crown and pushers in bronze, a material used in diving helmets and gear during Brashear’s time, and renown for its particular ageing patina, unique for each user.

The Oris Carl Brashear Chronograph Limited Edition is a rather special timepiece. First, let’s have a look at the hands-on video.

The Oris Carl Brashear Chronograph is a watch manufactured using bronze: the case body, the rotating bezel, the crown and the pushers are bronze. The material is not a common option for watches. Bronze oxidises and age over time. The material is sensitive to atmospheric moisture, wearers own perspiration and saltwater. However, this oxidation process leaves the watch a unique patina which is unique to each piece. The patina can be quite attractive in some ways, and also as it is part of the life of each owner, becomes a kind of special customisation. Over the years, no used Carl Brashear Chronograph will look the same. That is the uniqueness offered by the bronze watches. 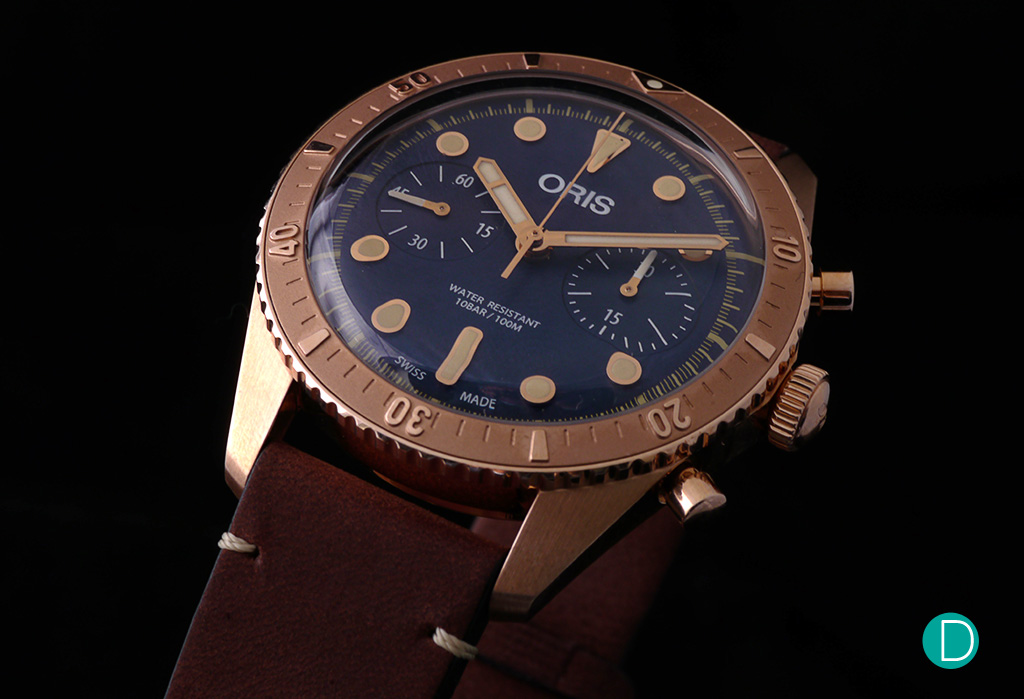 The Oris Carl Brashear Chronograph has a warm pleasant feel. The polished bronze reminds of red gold due to the high content of copper. A bronze watch used regularly will develop a darker patina and an extremely aged bronze will lead to the greenish oxides, similar to the old bronze statues.

The Oris uses bronze for the second time in a diver watch. Both occasions were used to pay tribute to the Master Diver Carl Brashear. The watch comes in a beautiful 43mm diameter brushed case with high polished sides. The case size is larger in comparison to the first Carl Brashear diver by only 1mm. Comparing with other diver watches, the Carl Brashear is somewhat midpoint in the Oris size chart. Between the Aquis Collection (starting with 36.5mm) and Prodiver Collection (up to 51mm diameter).

The unidirectional bezel features polished teeth which provides a good grip. The 60-minute timer has the classical diver features of embossed indexes at the 5 minutes positions and Arabic numerals for the 10 minutes indications.  The minutes are indicated by negative embossed indexes. The 0/60 minutes triangular marker presents a filled with Super-LumiNova® dot. Bubble-curved sapphire crystal, domed on both sides reveals indices and hands with Super-LumiNova® in a light old radium shade. The legibility is excellent.

The Carl Brashear chronographs come in a classical Uni-Compax layout, also called Compur: nomenclature started in the 30s for the horizontal arrangement of small seconds at 9 o’clock and chronograph’s minute counter at 3 o’clock.  The two register chronograph has a curved dial in dark blue. The contrast with the applied rose gold-plated indices with the blue background is delightful. The indexes are polished and filled with vintage looking Super-LumiNova®. The colour is similar to the radium luminescent paint used in the first diving watches. The side view of the case reveals the beautiful domed bronze crow, embossed with the brand’s name and the highly polished mushroom pushers. The contrast between the modern crown design and classical pushers is splendid. In our humble opinion, the pushers position is not optimal in rapport with the case construction/dimensions – the pushers seemed to be a bit drowned at the demarcation between lugs and case body.

The dial features two subtle sunken subdials. The running seconds, known also as small seconds indication, uses a combination of baton indexes and Roman numeral for every 15 seconds. The 30 minute counter uses baton indexes with Roman numerals for the 15th and 30th minute. The subdials are embellished with rose plated baton hands tipped in Super-LumiNova®.

The hour and minute hands are rose gold baton style filled with Super-LumiNova®. The chronograph central seconds is a slender rose gold hand. The outer seconds’ register makes a nice and smooth passage from the bronze bezel to the blue marine dial.

The dial is balanced and the chronograph’s indication does not interfere with the time reading. The dial has some vintage notes but is clearly a modern design.

Oris Carl Brashear Chronograph Limited Edition is powered by the Oris Calibre 771. The movement is based on the Sellita SW 510 on which the date module with the 12 hours chrono-counter removed. The Sellita SW 500 family is a robust base used also as a workhorse in other prominent watches: IWC Portofino Chronograph, Montblanc Timewalker and 1858 Automatic Chronograph Bronze, Mühle Glashütte and Sinn Pilot watch. However, this is the first time Oris is using the Sellita SW 510. The bronze case is covered with a beautiful stainless steel case back. The case back is adorned with a series of decoration. The most notable are the deep diving helmet and the Carl’s Brashear motto ” It’s not a sin to get knocked down, it’s a sin to stay down“. The caseback material in stainless steel is chosen as it is hypoallergenic and to avoid excessive oxidation of bronze.

Oris Calibre 771 has a diameter of 30mm and a height of 7.90mm. The movement offers 48 hours of autonomy and uses a 4Hz balance wheel. The Calibre 771 is equipped with a stop seconds mechanism. Since the case is closed with no view to the movement’s finishes we believe the calibre is classical machined finished and features an Oris specific red decorated rotor weight.

The Oris Carl Brashear Chronograph comes with a price tag of CHF4,700, €4,400, US$4,950, S$6600. For the price, it is offering a beautiful bronze case, a charming dial and a robust movement. While the bronze divers are not that rare, the addition of a chronograph to the diver is rather more uncommon.

The first bronze chronograph that comes into mind is the IWC Aquatimer Chronograph Edition “Expedition Charles Darwin” (Ref. IW379503). The flyback chronograph with a more complex in-house movement was the first bronze watch of the Schaffhausen brand. The 43mm case is rated at 300m water resistance. The watch uses calibre IWC89365, a modified version of the IWC89361 (used in other versions of Aquatimer, Da Vinci, Big Ingenieur and even in some versions of Portugieser). An original implementation of the maritime theme can be found at the Corum Admiral AC-45 (S$16,585). The watch was launched to celebrate Admiral’s Cup, an international yachting Regatta started in 1957. The rather large 45mm case packs a 30 minutes chronograph displayed on a lovely wood dial. The watch’s construction is complex making use of the bronze in combination with the most modern materials. The Calibre CO116 has a 28’800 vph balance wheel, 39 jewels and a power reserve of 42 hours. Corum Admiral is a nautical inspired piece that fits perfectly his design intention. The bronze case has a strong personality of her own that can be loved or hated.

For the ones looking strictly for a bronze watch, we can suggest a pilot watch from Montblanc – the 1858 Automatic Chronograph. Priced at €4,690, the watch comes in a slightly smaller 42mm bronze case and powered by the calibre MB 25.11 based on the Sellita SW 500.

For the one looking for a bronze diver, we can recommend the Bell&Ross BR03-92 Diver Bronze (S$5,900 / €3,800) (full review coming soon). Or the Tudor Heritage Black Bay Bronze Blue Bucherer Edition (CHF3,800), which is a rather difficult to find watch as it is only available in Bucherer.

The Oris Carl Brashear Chronograph is a 2000 piece limited edition. The combination of bronze diver and chronograph is a rather rare bird in the industry and makes the Oris proposal more interesting. The way bronze ages will attract fans and being a limited edition makes it even more desirable. The patina look and the dark blue dial have an engaging contrast and an excellent legibility. We were impressed and we liked the Super-LumiNova® colour shade used. We are now impatient to see how the watch will age with the time. If you have experience with the bronze watches, please let us know in comments your impressions about the bronze cases. The Oris Carl Brashear Chronograph has a good wrist presence. The dimensions are proper to may wrist sizes. The combination of curved dial and domed sapphire crystal reminds of the vintage watches while the dial’s elements denote the modern characteristics of the piece.

The watch comes in a beautiful wooden box. More information on Oris Website. The luxury wooden presentation box is made especially for this limited edition of Carl Brashear Chronograph. image courtesy of Oris.

Crystal: Sapphire, domed on both sides, anti-reflective coating inside