De Bethune is one of the Independent watchmaking houses who hold high respect within the haute horlogerie cognoscenti. The company under the watchful eyes of David Zanetta and Denis Flageollet has always been innovative and at the leading edge in its use of materials, in telemetry and in the the amazing beauty of the products. Extending the DB25T line this year is the Zodiac. 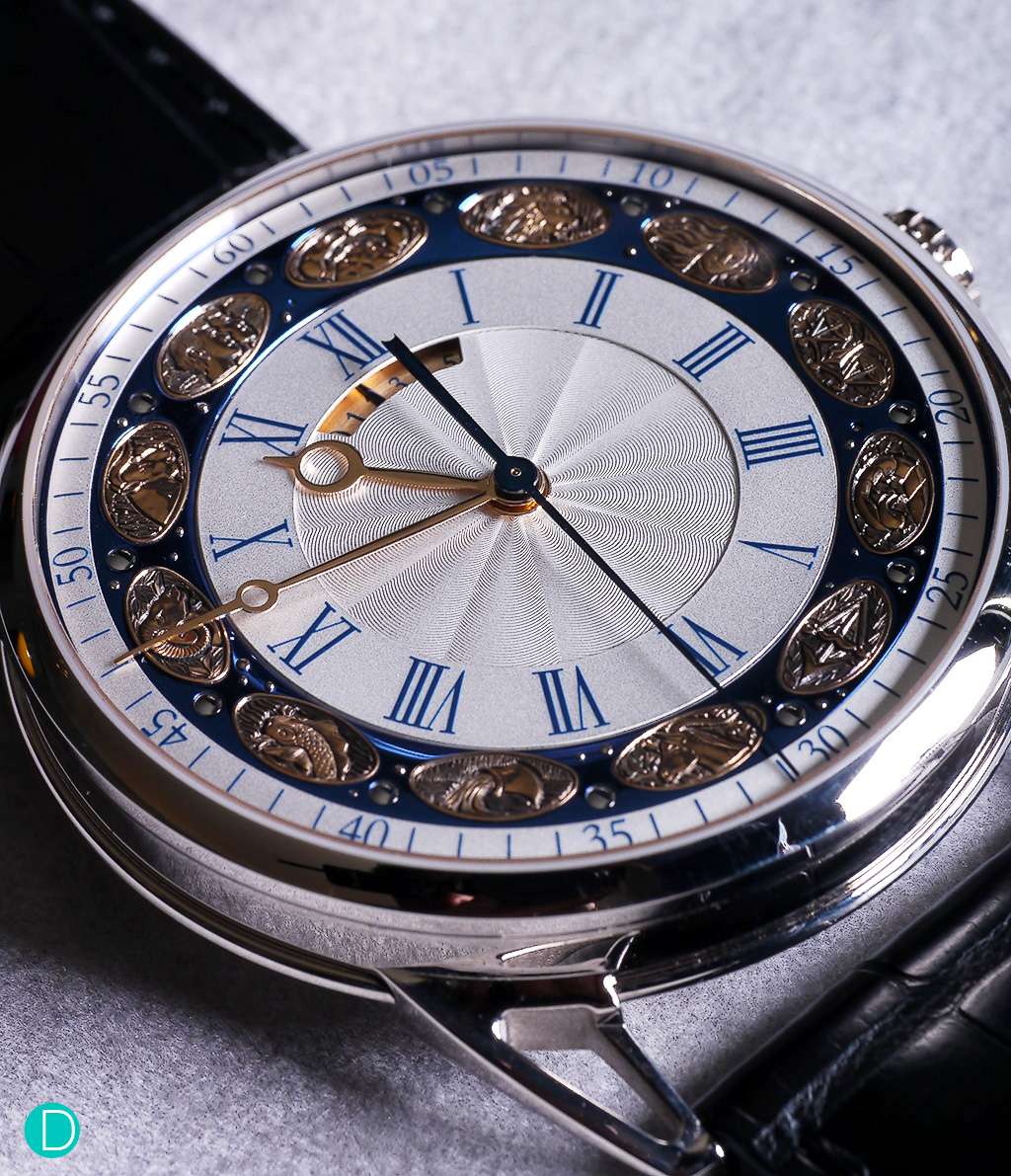 De Bethune DB25T Zodiac. The watch indicates the time in hours, minutes and seconds. And features a rather special applique on the dial representing the 12 zodiac signs. In typical De Bethune fashion, the brand name does not appear on the dial.

They have had a wildly successful run with their DB25 Imperial Fountain series of the 12 Chinese Zodiac watches. Now the Western zodiac is being featured on the DB25T, using the tourbillon version of the movement. 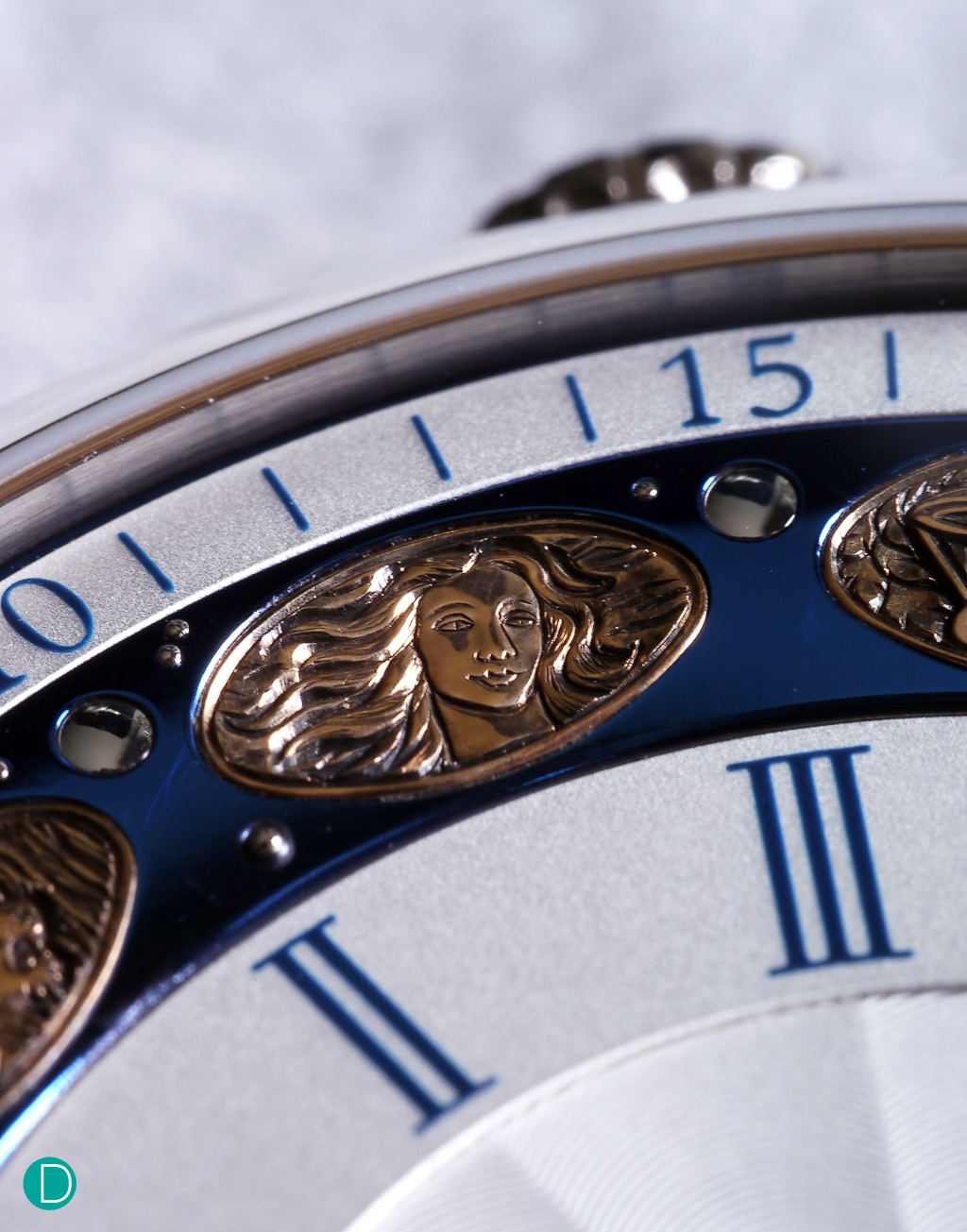 Detail on the gold applique showing the zodiac Virgo, laid over the vibrant blue of the heat treated titanium ring on the dial.

On a blued titanium ring on the dial, a set of 12 gold appliques are laid out to indicate the 12 zodiac signs. These are made by celebrated artist Michèle Rothen, who hand engraves each of the solid-gold signs on the 20 limited-edition pieces. The signs are set into a mirror-polished blued titanium ring, which is remarkably vibrant in person. DB25T movement is the DB2019. Magnificently laid out to look like a shield, with blued titanium bridges holding the 30 second tourbillon and the jumping seconds wheel. The movement has a power reserve of 4 days.

The movement is the amazing DB2019 mechanical hand wound caliber features a jumping second hand and a 30 second tourbillon which is only visible from the back. It takes confidence to build a complicated regulating organ like the tourbillon and keep it hidden, and not blatantly cut the dial to display the tourbillon. The jumping seconds mechanism is seen in detail with the large seconds wheel in the shield like titanium bridge. The jumping seconds wheel, under the skeletonized blued titanium bridge.

The blued titanium, also pioneered by De Bethune is very beautiful in its hue and quiet glow it imparts to the movement in terms of contrast, holds the special wheel with a very interesting teeth which allows the seconds hand, mounted directly on the pivot the staccato like effect of moving once every second. The jumping seconds mechanism is known as seconde morte in French, literally dead seconds, or translated as deadbeat seconds by some scholars.

The origins are not linked to the way quartz movements indicate the seconds. The seconds hands (and other hands) on a quartz watch is moved by a tiny stepper motor. Each time an impulse is sent to move the motor, the battery depletes a little. In order to obtain the power reserve of most quartz movements of a year or more, the seconds hand is designed to move only once every second to conserve energy. In contrast a mechanical movement’s second hand naturally moves 8 times every second in a 28,800 bph movement, and in a high beat movement like the DB25T which runs at 36,000 bph, 10 times a second. The desire to slow down the seconds hand indicator has its roots in accuracy as traditionally time is set by 1m pendulum clocks, in which the natural beat of 3,600 bph means that the seconds hand moves once every second. Detail of the tourbillon showing the skeletonized blued titanium bridge, and the beautiful 30 second tourbillon which is made from titanium and silicon.

De Bethune is one of the early adopters of technology, and I remember a quiet meeting in Basel some years ago, on board the De Bethune ship, where Denis Flageolet showed me and through my translator, the late great Derek Platt. Denis was showing their then new and top secret silicon escapement for the first time. Time has passed, and De Bethune’s experience on the use of silicon has grown, and the DB25T, originally introduced in 2011, featured a titanium and silicon tourbillon. On the wrist, the DB25T Zodiac is has a lovely feel. The lugs are nicely curved to sit well on the wrist bones, and though not articulating, is very comfortable. We understand it is possible to order the watch with long lugs for larger wrists and short lugs for smaller wrists. The watch exudes a quiet extravagance and a very classy ambience on the wrist.

The watch is available in a limited edition of 20 pieces at a Swiss Retail price of CHF250,000. Details and specifications are covered in our SIHH 2015 article found here.