On the left bank of the Rhone, a scant 10km away from Geneva’s city center ,sits Patek Philippe’s Home at Plan-Les-Ouates. “Ouates” is pronounced “whu-at” phonetically, lends the municipality an easy nickname derived from a phonetic pun symbolic of what the region has come to represent – Plan-Les-Watch; for Patek Philippe, like their historic move from across lake Geneva to the current day Salon on Place du Molard in the mid 19th century, plan they did. (i make no apologies for that pun). Then as in now, Patek Philippe was the first to break ground and start the process of unifying all the disparate workshops spread across Geneva in 1996.

A Geneva manufacture since their founding in 1839, Patek Philippe operations and rapid (sometimes rabid) acquisition of in-house know how and expertise has led to massive expansion plans since their move to Plan-Les-Ouates long before Rolex, Vacheron Constantin and Piaget ever cast their shadows on the ground. The imposing movement sculpture which dominates the entire left wall of the entrance to Patek Philippe’s HQ.

Indeed, the Calatrava cross emblem used by Patek Philippe since the 19th century was a symbol of mastery and perfection, first adopted by Cistercian monks in the Calatrava Order in 1158, subsumed by the Order of Calatrava by organisation of warrior-monks left by the Spanish crown to hold Granada and now today, representative of the almost monastic and religious adherence to horological pursuits as practiced by Patek Philippe at Plan-Les-Ouates.

Beginning with acquisition of Chateau Blanc, a distinctive off-white (whether intentional or by time’s ravaging) holiday house owned by a private family and now used for special VIP Patek Philippe events; the Genevan manufacture has grown considerably at its present home – not so much as a result of increasing annual production but from the burgeoning practice and acquisition of in-house know how, eventually it necessitated the creation of yet another building on the grounds in 2010. The famed spirals leading to the entrance where only the most honoured guests have been invited to enter.

It’s not possible to ignore the big hole in the ground where here foundation work is being lain. Surprisingly so, the expense of building down towards basements rather than the most-effective practice of expanding skyward seems an anathema but Patek Philippe has always had a traditional philosophy of being strategically counter culture – like when they first moved to Place du Molard, to when they first moved to Plan-Les-Ouates, it’s a historical motif which repeats itself – the corporate equivalent of a gambler’s tell. Dubbed Patek Philippe 6 or PP6, more activities including dial making are intended to be moved to Patek Philippe’s home at Plan-Les-Ouates.

As we enter the main building, we are greeted by an impressive clay sculpture of what appears to be a split chronograph movement, it takes more than a few moments to take stock of the comprehension that a watch lover is now standing in the heart of literal watch heaven with the surrounding structures making all manner of cases, bracelets, gemsetting, etc.

The tour begins with witnessing the creation of the most basic yet most vital of components – the birth of gear wheels and pinions. To wit an analogy, one might imagine the heart as the most important component in a body but without an efficient network of smooth running veins delivering oxygenated blood throughout the entire system, an ever increasing number of parts will start to wither and breakdown, eventually affecting the larger whole; therein lies the onerous of task of ensuring that the smallest wheel is cut and finished to the point of maximum efficiency for optimal energy transference.

Minute gear wheels being slipped onto a steel string for polishing work.

It’s a question which stumps the tour guide for the next few hours but nevertheless with promises to provide a satisfactory answer before the end, I would soon come to recognise that the ensuing reprieve from my answer and the discoveries to come in-between, that it is actually a point of self-evident fate that my answer arrives at the end, rather than now while my curiosity demands to be satisfied. As we stand, shoulder to shoulder, aisle by aisle along a row of Bergeon watchmaking benches filled with hand tools and machines, our guide briefs us on the anywhere from 40 to 60 operations on a pinion or gear wheel (over 400 types with different teeth profiles – some invented natively at Patek Philippe) to ensure that each and every surface is polished millimetre by millimetre to ensure not just the right dimensions of the pinion but also the right smoothness to ensure optimal efficiency. Various techniques of decoration like snailing or mirror finishing are applied for either aesthetic or for purposes of engineering efficiency and transmission.

It’s not ego or conceit which encourages Patek Philippe to finish even the surfaces unseen, but rather good business – the surfaces unseen are “touched” and seen by the other components which interact with it – any unpolished burrs or uneven surfaces are simply magnets for friction and grime – not ideal for optimal transmission. Our guide explaining how many surfaces there are to finish and polish and why even the polishing the unseen surfaces are a practical concern rather than one of pride or ego.

Each operator has undergone at least 3 years of training, it’s a provoking reflection that the work is more than just pushing a button or stepping on a peddle to cajole a machine into action, it requires the sum of experience and the feel of how the metal behaves under a variety of lathe or polishing wood before it becomes a form designed and desired by the artisan watchmakers working on the floors above us. As we watch the female technician work on the gear wheel, we soon notice that there’s no “set rule” on number of operations, she takes the component and works it till she senses via vibration of the material that it has achieved the right level of work before she sets it aside with a pair of tweezers. It’s an engineering science with lots of leeway for the “feel” or approximation guided by years of training and expertise – each operator has a different way of “knowing” when a component is done.

During Deployant Get-Together last year, one of our most veteran collectors had explained that instead of expensive polishing cloths, he had preferred the use of wood or tree-bark. At Patek Philippe, there’s a similar practice of using a variety of wood from beech to pear, at varying densities of thickness and hardness for a myriad of different surfaces to different results and effects. Even at it’s most basic level, the inner and the outer surfaces of each and every component is worked on and finished in tandem to ensure uniformity and consistency. Our guide reminds us that it’s not ego or conceit which encourages Patek Philippe to finish even the surfaces unseen, but rather good business – the surfaces unseen are “touched” and seen by the other components which interact with it – any unpolished burrs or uneven surfaces are simply magnets for friction and grime – not ideal for optimal transmission. A surprising number of sad emojis dot noticeboards across the various departments. Perfection is hard to achieve one imagines.

Curiously, emojis are the last thing one expects at a highly technical factory like Patek Philippe but almost department has them on a noticeboard of charted personnel and areas of responsibility. It’s a 3 tier feedback process of sad face, neutral and smiley and it says a lot of the manufacture when a board is filled with “Sad faces” – not a reflection of poor work but rather a perpetual reminder that “one can always do better”. Perfection is just always out of reach.

At some point, standing amidst the many automated computer controlled machines, one has to ask the question, “Long ago, everything was hand-made but we have reached a point where machines are starting to demonstrate ability of performing certain tasks better than human hands, where will Patek Philippe draw the line?”

For my question, one need only look at Patek Philippe’s production philosophy for the answer and the brand’s perspective is one which our Guide preaches a very honest answer, “Everything that a hand can do better than a machine, we will do. But when machine can assist the work of a person, we will not adhere blindly to tradition. Gemsetting in Patek Philippe is hand done and while it’s relatively easier to make stone-setting positions on precious albeit softer metals like gold, when you work on steel, repeated work on such a tough material risks injury to the artisan. For that, we are more than happy to delegate such work to a machine so that our artist can save his hands for more vital operations like artistic work rather than pure manual labour. Most finishing is done by hand anyway due to the inaccessibility of the angles but if a machine can do it better, Patek Philippe is happy in its pursuit of perfection to cede responsibilities to it.” Even the brass holders are custom cut to fit the components which the machines are meant to finish before hands complete the work.

“Guilloche can be completed by a machine very easily but the reflection of the light from machine engraved guilloche versus that of hand worked guilloche expresses very different qualities of ambient light. From a machine, the play of light is uniform, perfect and lifeless. From human hands, the guilloche is consistent not perfect, a human working on guilloche first thing in the morning and towards the end of the day will have slight, almost imperceptible differences which allows the light to dance, sparkle and reflect life; this quality is important. We have found that human talent is still vital to the enterprise.”

Indeed, even as we digest the answer, the guide beckons me over to the department (the literal place where they print the brand on the metal) behind the large macro shots of Patek Philippe lettering on the 3/4 plate of a movement; holding a folder of pictures and documents, she leafs the plastic sleeves to an old faded photo and explains, “This recorded last photograph of a hand engraved dial made in 1964 and our technician believes that mechanical engraving started in 2000 but the first letter engraving machines were bought in 1977. Officially, we don’t know when we started machine printing the “Patek Philippe” letters on the movement. This is a tough question and I hope to be able to get you an answer soon.” As you can see, many different types of wood discs for many different polishing techniques. In the background, a potted ficus, Patek Philippe is starting to grow their own wood in-house (I jest). Look at the text on this 1960s Patek Philippe movement. At a glance it looks fine enough but on closer inspection, there are irregularities. In time, the work of engraving these lettering become the task of machines.

In our perspective, the “artisan vs machine” debate isn’t about who is better but rather where the advantages are better used. To the naked eye, the hand engraved dial from 1964 shows a competently printed brand name on the plate. Under loupe, you can see the roughness and unevenness of the individual letters which spell “Patek Philippe”. On the 2010 dial, the letters are perfect even under magnification and the kerning and leading is completely even. Thus the debate evolves from a what or who is better, to one which the guilloche example perfectly answers – the artisan is important where it most matters – placing the jewels or performing the decoration; machines are welcome to the menial (and meaningless) work. Patek Philippe isn’t blindly following traditions, it’s apply smart use of mechanised production for crucial yet uninspired tasks while saving her artisans to execute best of horology’s traditions and practices through lasting, meaningful expressions of passion. 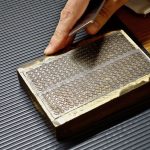 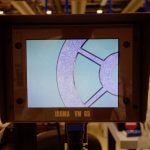 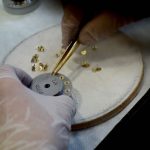 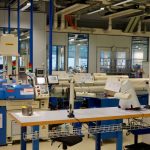 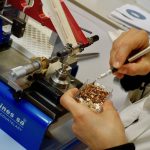 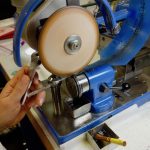 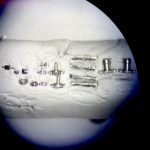