Girrard-Perregaux may not be as highly regarded as some of its compatriots from Geneva or Le Brassus, but it has done well in recent years to correct that notion. The brand’s Neo Bridges watch for SIHH 2017, which is a modernist take on the iconic Tourbillon with Three Bridges (sans tourbillon), was lauded for its memorable design and aesthetics. This year’s Girrard-Perregaux showpiece at SIHH – the Minute Repeater Tri-Axial Tourbillon – was a not-so-subtle reminder to the doubters of the manufacture’s watchmaking prowess.

Launched alongside the Minute Repeater Tri-Axial Tourbillon was the Classic Bridges 45 mm. This time, Girrard-Perregaux has opted to step backwards in time rather than forward when re-interpreting a pre-existing timepiece – the Neo Bridges in this instance. The Classic Bridges 45 mm isn’t strictly speaking classical in design as the name would suggest, but it does employ more classic materials and aesthetics. Here, we bring you the details and our thoughts on Girrard-Perregaux’s latest interpretation of the famous gold bridges. The case of the new Classic Bridges 45 mm measures, well, 45 mm in diameter. There is no two ways about it, the watch is oversized unless you have tree trunk wrists. But it’s not such a bad thing. The Classic Bridges 45 mm isn’t a traditional dress piece – it never was intended to be demure. It is designed to be a statement piece, and its 45 mm case size ensures an indomitable presence on the wrist. We should mention now that a 40 mm version of the watch was also presented at SIHH, maybe because the brand understood that not too many people can wield a 45 mm with grace and security. This is perhaps also further evidence that the watch community is shifting its eyes towards smaller timepieces (even though 40 mm isn’t exactly small). We’ve seen other brands heading this direction too, releasing the same watch in a larger and a smaller size, most notably with Patek Philippe and its pilot’s watch and with Vacheron Constantin and its driver’s watch. But we digress. While the 2017 Neo Bridges had an industrially finished titanium case, the Classic Bridges 45 mm takes a more old-school approach with an entirely polished case in pink gold. It isn’t exactly slender at 12.15 mm but should still slide under a sleeve without too much hassle. The Classic Bridges 45 mm has tremendous wrist presence due to its size and design, but a slightly less conspicuous 40 mm version is also available.

The dial is where the Classic Bridges 45 mm starts to get really interesting. Well, actually, there isn’t much of a dial save for the minute track and hour markers along the perimeter of the case. The partially openworked dial offers tantalising glimpses to the inner workings of the dial. Standing out vividly are the arrow-shaped gold bridges. While there are only two of them here (as opposed to the three on the Tourbillon with Three Gold Bridges), they look so spectacular that you wouldn’t mind the missing third. The polish on the top surface of the two bridges is so immaculate, you will see your mug on it whether or not you like it. The mirror-like surface is outlined with skilfully executed chamfers (also polished) with numerous outward and rounded angles that form the arrow heads. These bridges are secured by 4 screws – one on each arrow head – all of which have polished screw heads. The other bridges and plates are grey and sandblasted to provide the ultimate contrast to the resplendent golden bridges. Indicating the time are dauphine minute and hour hands. Along with the hour markers, they are coated a with a tiny bit of luminescent material for visibility under low- or no-light conditions. Finishing fiends will love the way the two arrow-shaped bridges on the Classic Bridges 45 mm is polished and bevelled.

Ticking inside the Classic Bridges 45 mm is the 29-jewel, 207-part Calibre GP08600-0002. It might not look like it in the photos but the movement is indeed automatic winding. Arranged in perfect symmetry, the steel micro rotor is located between 10 and 11 o’clock while the mainspring barrel sits between the 1 and 2 o’clock position. Together they bring a minimum power reserve of 48 hours to the movement as the balance wheel beats away at 3 Hz.  A 3 Hz beat rate is rather old-fashioned from a modern mechanical watchmaking viewpoint, but in the Classic Bridges 45 mm, it’s important from a design standpoint. As the star attraction on the dial (apart from the two ornate bridges), a large-ish balance that oscillates at a lower frequency and can be trained by the eyes is perhaps more attractive than one that beats faster and looks like nothing but a blur.

As the movement is heavily front-loaded, there’s not much to see from behind. Despite that, the plates are still decorated with gorgeous Geneva waves, with the edges chamfered and polished by hand.

Overall, the Calibre GP08600-0002 – even without complications – has been afforded the highest level of form and function, rendering it worthy of haute horlogerie. That should come as no surprise from a prestigious manufacturer like Girrard-Perregaux. 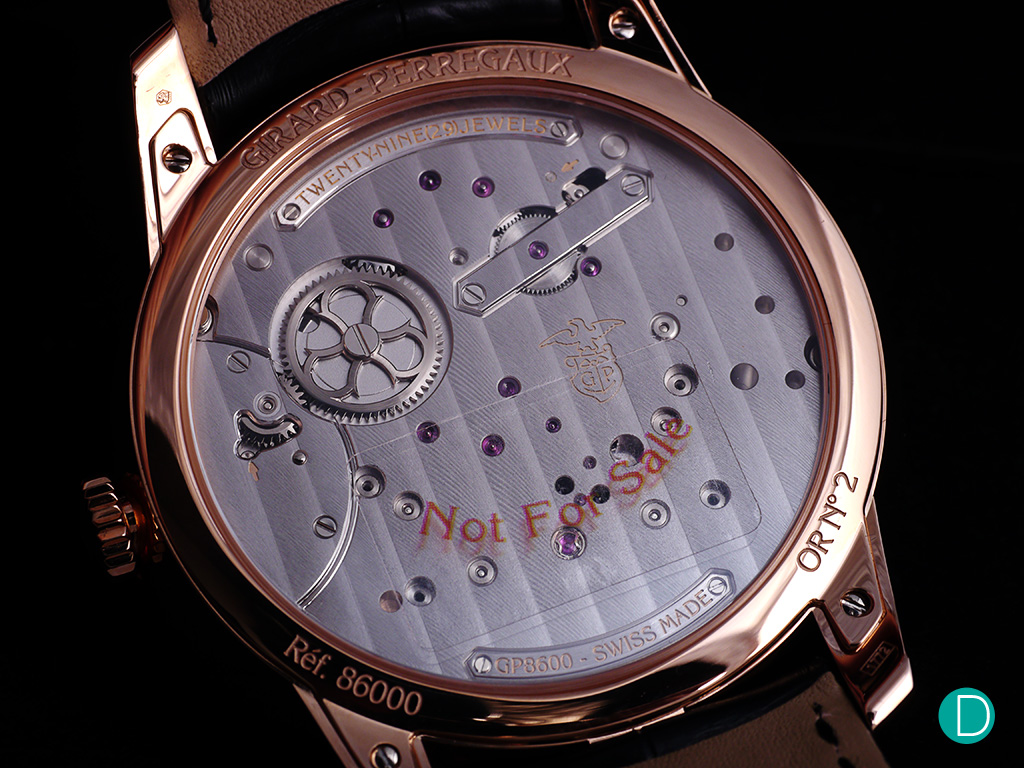 The Calibre GP08600-0002 as viewed from the sapphire crystal case back.

The golden bridges and Girrard-Perregaux are synonymous with one another; the Classic Bridges 45 mm does them both justice. The watch offers a stunning interpretation of the iconic arrow-shaped bridges and encapsulates the brand’s capabilities and vision perfectly. Its openworked dial and contemporary design may not suit everyone, but as the saying goes, “one man’s trash is another man’s treasure”. The Classic Bridges 45 mm will have no trouble finding suitors, most likely those looking for a modern-classic timepiece and unafraid of conspicuousness. The watch retails for USD36,300, not cheap by any means, but understandable given the extra amount of handiwork required compared to a conventional two-hand timepiece. The Classic Bridges 45 mm is gorgeous on the wrist. The golden bridges and the balance wheel become the highlight of the piece.

But as far as iconic dress watches go, few are truly more recognisable and memorable than the Jaeger-LeCoultre Reverso. The story goes that the Reverso was designed in the early 1930s to withstand the polo matches of the British Army officers in India. French designer René-Alfred Chauvot patented the now-iconic pivoting case of the Reverso that -when reversed – allows the sapphire crystal and dial to be concealed and protected from possible mallet strokes. The Grande Reverso 1948 Ultra-Thin (pictured below) is a shining example of a Reverso in its peak form. The watch was first introduced in 2014 and charmed its way to the hearts of enthusiasts with its modern blue-on-white design. It is by all measures more conservative in design than the Classic Bridges 45 mm, but if that is how you like it, then the further good news is that it is ‘only’ about USD10,000. Where luxury watchmaking is concerned, that is good value for money.

The Jaeger-LeCoultre Grande Reverso 1948 Ultra-Thin, with its iconic reversible case.

Another instantly recognisable icon that bears mentioning is the new kid on the block, the A. Lange & Söhne Lange 1. Sure, the German brand has been around for well over 20 years but compared to the Reverso or the golden bridges, the Lange 1 is a toddler by comparison. And yet, the fact that it is burned into the minds of every fine watchmaking enthusiast in spite of its youth is testament to its inspiring design and historical significance. With a grande date and a power reserve indicator, the original Lange 1 is the simplest, least complicated timepiece in the Lange 1 collection. What really draws admiration from connoisseurs is how the asymmetrical dial layout feels perfectly balanced (even though it shouldn’t be). This has all to do with geometry and respecting the golden ratio. It also helps that the Lange 1 is the face of A. Lange & Söhne’s resurrection and resurgence back in 1994. At about SGD47,200 for the pink gold version, the Lange 1 is virtually identical to the Classic Bridges 45 mm in pricing. Both watches obviously target different audiences but really, you can’t go wrong with either. The Lange 1, an icon in design, first introduced in 1994, still as fresh as ever.

The Classic Bridges 45 mm is the latest step in the evolution of the famous golden bridges. With its stylish, contemporary design, impeccable finishing, and more accessible pricing (vs. its tourbillon caged siblings) we feel the Girrard-Perregaux icon has definitely taken the right step forward.