This Baselworld, Blancpain pays a tribute to a lifesaving timepiece released 60 years ago with the Blancpain Fifty Fathoms MilSpec. We examine the watch in great detail, and came away very impressed. The aesthetics are excellent, as is the technology within. But also the tribute to the historical watch is fitting.

Origins of the species

At the beginning of the 50’s, it was Blancpain’s CEO Jean-Jacques Fiechter passion for diving coupled with the need of a reliable tool watch for Captain Robert “Bob” Maloubier and Lieutenant Claude Riffaud, founders of the French Navy’s combat swimmers corps, which led to the creation of Fifty Fathoms. Upon not being able to find a watch capable of the extreme conditions of underwater missions, the two officers approached Blancpain with an highly specific set of technical specifications. This specification including a revolutionary unidirectional bezel. The watch developed following these requests is considered the archetype of the diver’s watch, its name derived from the water resistance guaranteed to a depth of 50 fathoms or 91.45 meters.

The Fifty Fathoms were met these specifications by the use of a patented double sealed crown system. A second patent for a case-back with a channel into which the “O” ring is held in position. And of course, the unidirectional bezel to mark the critical dive timing.

Further, the Blancpain Fifty Fathoms make another important innovation, with the use of white luminescent indexes and hands on a contrasting black dial, increasing the underwater visibility. The automatic movement also reduced the need of crown usage for winding, and thus increasing the usable life of the crown’s seal.

Blancpain continued its innovation streak under Jean-Jacques Fiechter’s supervision and in 1957/58 incorporated a moisture indication on the dial – the MIL-SPEC 1. With this,Blancpain managed to win the contract to equip the elite UDT and the Navy Seals. At the beginning of the 60’s, with the incorporating a humidity indicator on the dial, which changes its colour from pink/blue to entirely pink. The humidity indicator would show if water moisture had penetrated the watch, hence requiring a servicing. This was the so called  “Tornek-Rayville”, after Allen V. Tornek of the Rayville factory, the representative of Blancpain in the US. 1000 of these watches were delivered to the US Navy. One such piece was auctioned by Christie’s as Lot 101 in 12 November 2007, Geneva for CHF 18,750 against an estimate of CHF 9,000-14,000.

This year, Blancpain released the “Tribute to Fifty Fathoms MIL-SPEC” to celebrate 60 years from the first release of the watch with water-tightness indicator. Last year, Deployant reviewed another “brother” from the Fifty Fathom Collection – the Blancpain Fifty Fathom Bathyscaphe.

The Blancpain’s MIL-Spec is a worthy successor of the ’57 release, coming in stainless steel with a classic look and a modern touch. We carried the Press Release for the Mil-Spec in our Baselworld coverage. At the show, we were able to spend time examining the watch and photographing it, and bring you our hands-on analytical review in this article.

This diving watch’s case is a little unusual: you would expect, for a tool watch, to see a more dull-looking case, instead you will see a glamorous highly polished case. The 40mm diameter case is simple and gorgeous, the only decoration. 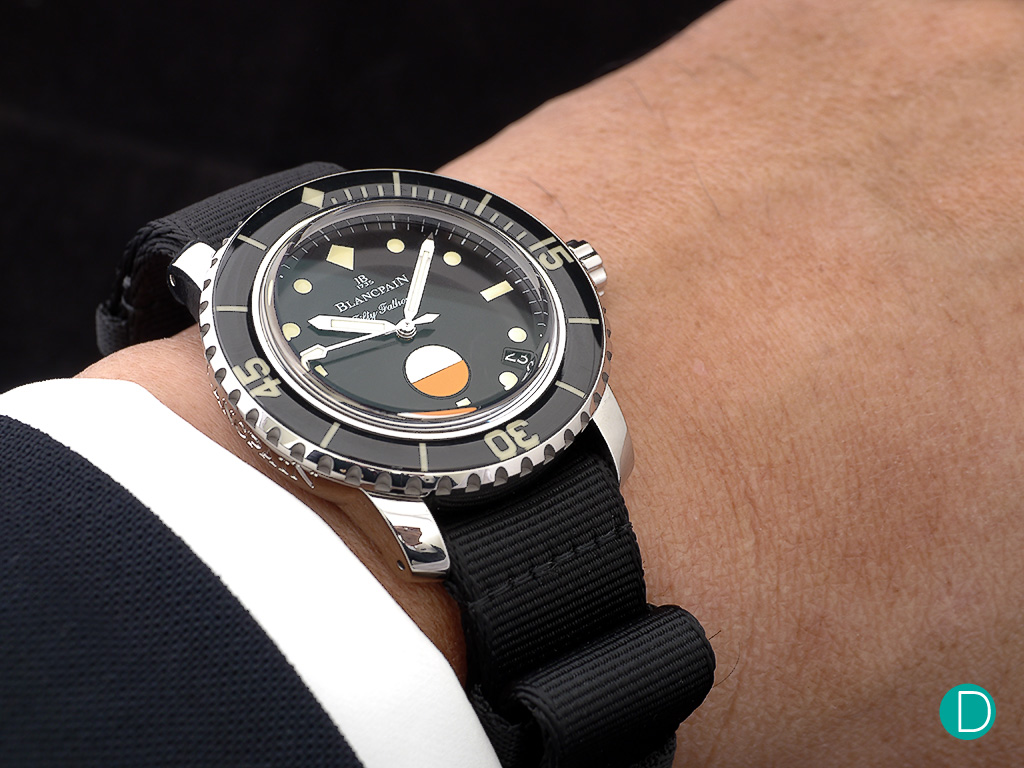 Even with a NATO strap, the wrist appearance is incredibly elegant due to the black-silver contrast and the relative small size for a dive watch

A prominent feature of the watch is the convex sapphire bezel. The steel based bezel with unidirectional ratcheting system is a very important  feature for a diver, and part of the original specifications of the Fifty Fathoms. The grooves on the bezel are cut so that it can also be used with gloves. A sapphire scratch resistant protects the bezel. Luminescent minutes’ numerals and indexes on a black background offer a depth effect. The dial is clear, legible, with a rather spectacular “classic diver” look. The 15 minutes counter scale on the bezel was once used by the divers to monitor the ascent time for the necessary stops during diving to prevent the bends.

Under the robust domed sapphire crystal, is visible the subtle sunburst black dial with Super-LumiNova® painted hour indexes. Together with the baton Superluminova filled hours’ and minutes’ hands and arrow shaped seconds’ hand, the dial is a lovely view in all times. The dial surface has a play in the light during the day and provides good visibility in the dark. Actually, the night view is the most spectacular and, the beast aspect of it, is the long decay of the luminescence of the indexes. Perhaps offering enough “energy” for the entire night of visibility (of course, in a normal sunny day). The domed sapphires of the watch’s face and matt black bezel create a pleasant depth effect without being bulky and heavy, the 40mm case contributing to the finesse of the 2017’s MIL-SPEC

As with the original MIL-SPEC 1, the 2017 edition also incorporates a water-tightness humidity indicator. The white/orange dot placed at 6’clock, recalling the designs of the 1950s is an instant indication of high humidity with the case, perhaps indicative of case damage. A complication that has the highest probability not to be used. We expect that a 300m water resistant watch will never have an issue with the water tightness due to the technological advance in the last 60 years. Still, the indicator, even with a more romantic function now, remains a potential life saver.

The dial’s most delicate detail is the trapeze date window placed between the 4 and 5 o’clock hour indexes, being perfectly visible without obstructing or disrupting the overall dial appearance.

The crown’s protection bumps are a combination of beauty and utility as all the components of this watch are doing their job without being obvious.

The diving timepiece is equipped with an in-house caliber offering a modern movement: a four day power reserve achieved using two series coupled mainspring barrels, a regulation realized with a silicon spring- balance with the clear advantages like magnetic field tolerance and light weight, offering a better precision for the end-user. Using an in-house caliber means that the watch can be serviced only in a Blancpain authorized service. The Fifty Fathoms MIL-SPEC is available in a limited edition of 500 pieces.

The movement decorated with Geneva waves has a special detail – the ball bearing mounted solid 18k gold winding rotor which is coated with a platinum alloy offering an extravagant contrast and a better winding efficiency.

Is important to note that the water tightness indication is not connected to the movement whatsoever, being just a simple moisture indication.

At S$ 19,500 retail price, the 2017’s ­MIL-SPEC diver watch is not the cheapest out there, but certainly not the most expensive. It is also not the only watch with a built in humidity indicator. Sinn produces an entire line of watches with a copper sulphate capsule which turns blue from a near-white when the inside of the case has high humidity. Their latest Sinn EZM 12 (US$3,340 or about S$ 4,700) is one such example. But the Sinn uses a less exclusive ETA movement, and rated to a depth of only 200m, as it is not is a diving watch.

Another diver watch from Blancpain is the Fifty Fathoms 500 Fathoms GMT priced a little bit over S$ 40,000 offering an increased case size of 45mm and the 2007’s 120 hours power reserve 1315 in-house caliber.

From the house of Omega comes another legend, with orange on the dial, in the person of Omega Seamaster Ploprof 1200m – as the name says, a 1200m water resistance in a titanium watch with a bidirectional bezel, helium valve and the Omega Co-Axial escapement priced at approx. S$ 13,000. But the Omega does not have a built-in humidity indicator.

Perhaps the best diver’s watch is the Rolex Oyster Perpetual Submariner Date (S$ 11,500 with GST) that can be easier compared with the Blancpain MIL-SPEC: initially released in 1953, the same year as the Fifty Fathoms, packed in a 40mm steel case with an automatic 3135 in-house COSC/Rolex Chronometer certified movement. Limited to 500 exemplars, the “Tribute to Fifty Fathoms MIL-SPEC” is offered with a NATO strap, a beautiful sail cloth strap, that looks very good on the watch or on a steel bracelet with a secure buckle. The special feature of the humidity indicator is perhaps never utilized, as the watch is rated to 300m, but is a lovely detail to a great looking watch. Due to the small-for-a-dive-watch size, this timepiece perhaps best as a dashing, fashionable watch for the connoisseur.