Grand Seiko, the talk of the town, and nothing that leaves its factory ever seems to go wrong or gets disliked. The hype is frankly overwhelming, and the naysayers seem to have all been won over. We love their watches, the touché value for money, quality craftsmanship and the whole package. Indeed, Grand Seiko’s dial and case work is easily the best in its price category. But one thing some of us never got around is the thickness of the case. Classic watches with really thick proportions. If only, we lived in a perfect world of Grand Seiko’s, where they have self-winding watches under 10 mm in thickness, and manual winding at 8 mm. The true utopia. Last week we wrote about the Grand Seiko Recreation, and this week, we look at the modern reinterpretation of the 1960 GS. The Grand Seiko SBGR305, limited edition of 968 pieces. Cased in brilliant hard titanium, the watch measures 40.5mm in diameter and 13.6mm in thickness. Attractive from every angle, the case is a mixture of polished and brushed surfaces, perfected with Seiko’s unique Zaratsu polishing technique. The finish emanates a brightness that conventional pure titanium lacks. Magnifying the charm of the dial, is a high definition dual-curved sapphire crystal. Especially suitable, given the immaculate finish of the dial. Cased in brilliant hard titanium, the watch measures 40.5mm in diameter and 13.6mm in thickness.

The dial surface has a white frosted texture, fit with applied hour indices, which are in their own right beautifully polished; the mirror-like finish with an angular taper adds icing to the cake. But the central focal point of the watch is in the hands and of course, the new “GS only” logo. Following this year’s releases, Grand Seiko will feature as a stand alone, independent of Seiko. While it is apparent that only GS will feature on the dial, instead of both GS at 12 and Seiko at 6, it seems ambiguous how this independence will be meted out in the business sense. The frosted texture adds depth to the dial, and greatly complements the blade polished hands.

The frosted texture adds depth to the dial, and greatly complements the blade edge polished hands. Distinctly different from the regular split centre dauphine hands, the GS hands have a certain rawness, machined precision, and masculinity in its sharp angles. Perhaps due to its Japanese influence, the emphasis on precision and over engineered perfection seems to come through on this dial.

Instead of dot minute markers, or other displays, the SBGR305 uses a rehaut minute marker. Not the most often seen on Grand Seiko, which usually uses a peripheral minute marker, like on the 44GS and 62GS, the new display may also be a subtle signal of the brand’s reinvention. 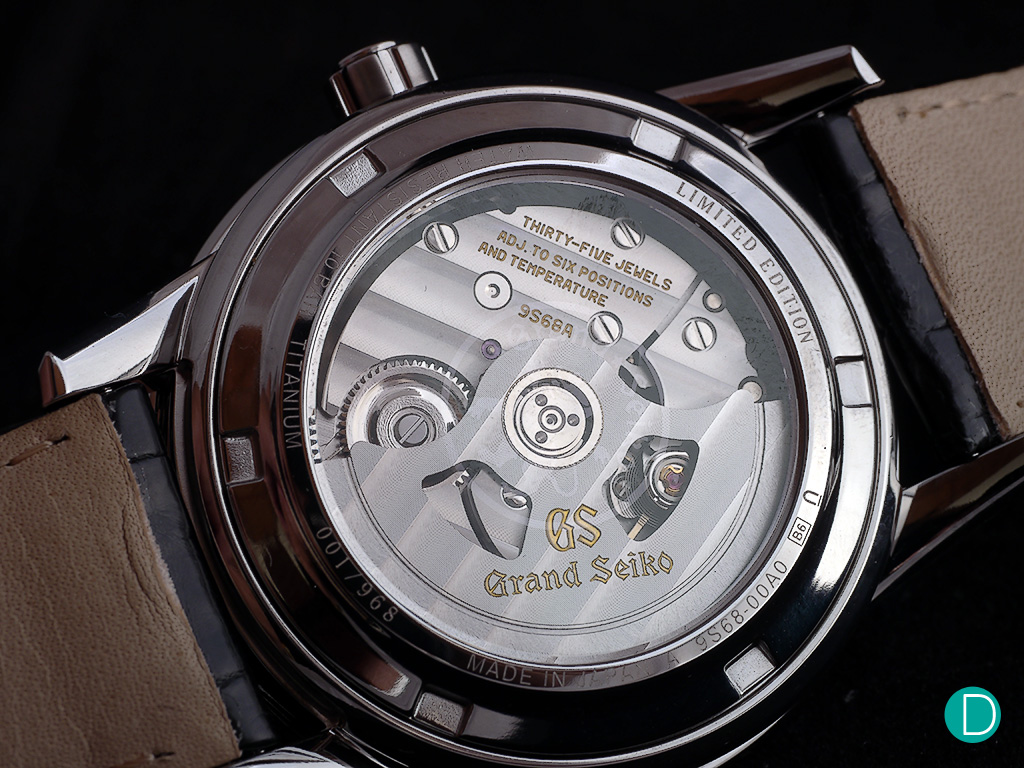 The watch uses the Caliber 9S68, a workhorse movement that powers most of modern Grand Seikos. The automatic movement beats at 28,800 vph and has approximately 72 hours power reserve. Typically adjusted to -3 to +5 seconds, the movement is well within acceptable accuracy for mechanical watches. For most who have seen this movement, the finishing is nothing spectacular, with simple machine finished lines. The titanium SBGR305 is as exceedingly fine, as expected of a Grand Seiko execution. The frosted dial, knife edge hands and chapter ring simply grows on you.

Lovely timepiece. Plus points for a three day movement, full titanium case, beautiful frosted dial, mirror polish hands and indices, and superior pedigree. But, the watch is 13.6mm, a tad on the thick side for a classic watch. Priced at US$7,200 at launch, it starts a whole comparison play. One could think of Glashütte Original Senator 60s, Senator excellence, L.U.C. Chopard, and even the latest Jaeger leCoultre Master Control Date. All of which ironically are less popular than the Grand Seiko, but easily on par if not superior to GS in terms of design, price, superior movement engineering or movement finish.