Launched in 2013, the Blancpain Fifty Fathom Bathyscaphe was produced to commemorate the 60th anniversary of the watchmaker’s flagship diver’s watch. Often overshadowed by the bigger brother (the Fifty Fathoms), the Bathyscaphe is still nonetheless a stunning piece that is no-nonsense and practical.

Despite the simple nature of the timepiece, the three-hand Fifty Fathom Bathyscaphe is actually a rather gorgeous watch with some tasteful design cues. We also love how uncluttered the watch is, and how every element of the timepiece actually serves a proper and useful function. To add some icing on the cake, Blancpain had made some modifications to the Bathyscaphe in this year’s Baselworld to make it even more desirable than before. The watch, as seen in the picture above, is fitted with a dazzling blue sunburst dial. At different angles or lighting conditions, the shade of blue on the dial actually changes. It makes the watch very interesting, and it definitely adds some flavors into the watch.

On the subject of the dial, the face of the Bathyscaphe is kept as simple and clean as possible. It is because this is meant to be a tool watch, and practicality is probably one plausible reason as to why the dial is uncluttered and completely devoid of any redundant stuff. It features eight round hour indices, as well as four rectangular ones at every three hour intervals on the dial. Even the indices are sized rather small, to ensure that the face is kept as clean as possible.

The dial is paired with a pair of bar hands, and a red-tipped lollipop seconds hand. Additionally, among the hour indices, there is also a date window at the 4:30 position of the dial. Many collectors are mixed on this – some prefer the date window to be omitted, and others prefer it to be placed at another position. For us, we feel that the arrangement on this particular watch is not too bad as the date window assimilates into the dial nicely without sticking out like a sore thumb. 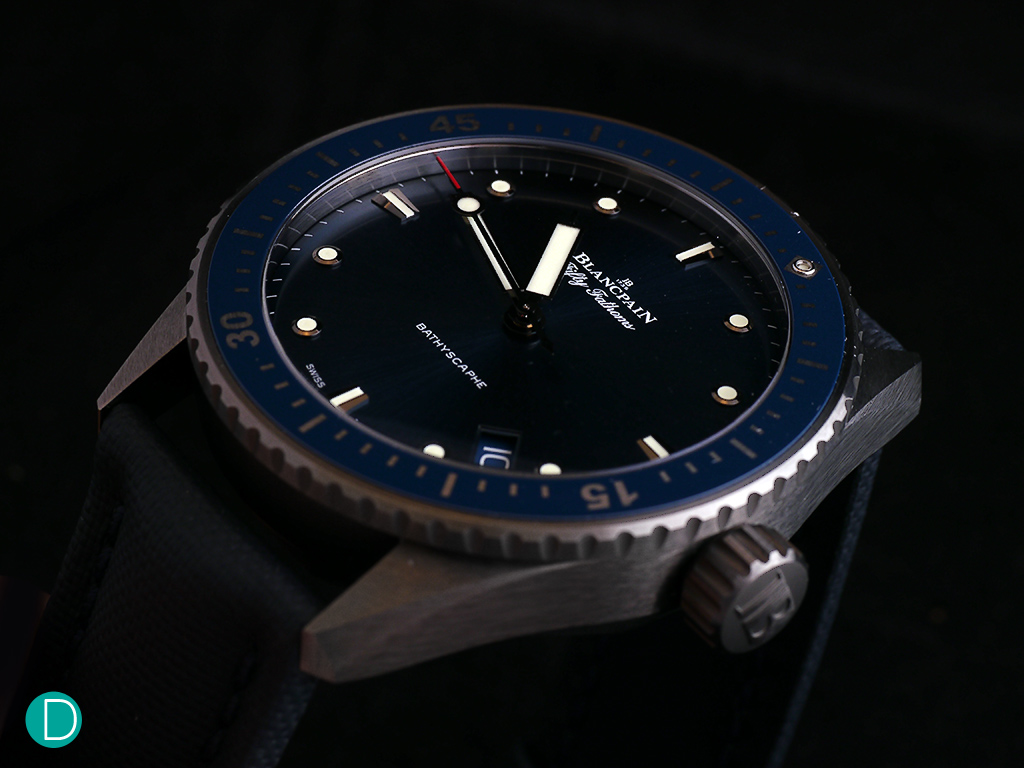 Another angle of the Fifty Fathom Bathyscape. The use of a plasma gray ceramic case gives the watch a rather interesting appearance.

The blue dial, notably, is complemented by a uni-directional plasma grey bezel that features a ceramic blue insert. The insert also features Liquidmetal hour markers, which adds to the contrast of the watch. The 43.6mm watch is also cased in plasma gray ceramic, and it gives the watch an interesting aesthetic that remind us of brush-finished titanium. In fact, it feels very industrial, and it sort of reminds us of the silver oxygen tank that the divers use in their diving trips. This definitely adds some character into the timepiece.

Of course, the case is not all looks and no substance. It actually feels rather solid, and it is water-resistance of up to 30 bars. The Calibre 1315 that powers the Fifty Fathoms Bathyscaphe.

The watch is fitted with Blancpain’s Calibre 1315, a highly-acclaimed automatic movement. This is the same movement that is fitted on the flagship Fifty Fathom diver’s watch, and it boasts an incredible power reserve of approximately 120 hours. In addition, this movement is features a silicon balance-spring which makes it amagnetic. On top of that, it is also fitted with other components, such as the robust glucydur balance wheel, and the square-head gold micrometric regulating screws for better precision as well as efficient adjustment.

For this particular model, the movement is also showcased via an open caseback. Also, it features a special 18K Gold rotor which we reckon received some sort of treatment and finishing to match the grey plasma ceramic casing. Additionally, the finishingis decent for a tool watch. Especially, for a diver’s watch, we find the overall movement is pretty solid, in terms of both quality and performance. A mandatory wristshot. Overall, we feel that the watch is extremely well-balanced.

Well, we have to admit something: we all have a thing for blue watches. And for this particular Bathyscaphe, the poison runs really deep. The combination of the amazing blue sunburst dial, stunning blue bezel, extraordinary plasma grey ceramic case, and the lovely blue sail cloth strap (or the three-ring NATO strap) made us fall head over heels with this watch. Each of these element complements the others very well, and the final result is nothing short of incredible.

But the Fifty Fathom Bathyscaphe is not only a pretty face with a timeless design; it is one solid and functional timepiece. The robust build quality and powerful performance make the watch very practical, and we reckon that it can perform very well under trying conditions. On top of that, it is rather versatile as well. We feel that the watch is not only restricted to diving trips or an outing to the beach, as the picture above also illustrated that the watch looks rather good with a suit as well.

In conclusion, we think that the watch is a fitting tribute to the original Bathyscaphe (as well as the Fifty Fathoms) that was produced many decades back. The addition of this new variant just makes it even more desirable, and we reckon it is definitely an excellent (but slightly pricey) alternative to the usual Submariners and the Seamasters.