Patek Philippe celebrates its 175th anniversary with a new collection and a new ultra complication. Now that the heat and the fury of the new launch pieces have simmered, we can take a cool headed view of these novelties.

Let us begin with Patek’s crown jewel, the Grandmaster Chime (ref. 5175). The Grandmaster Chime is well deserving of the ‘ultra complicated’ title, with a resounding ‘20’ complications.  It contains four spring barrels, and houses amazing functions such as a Grande and Petite Sonnerie, a minute repeater, an instantaneous perpetual calendar with a four-digit year display, a second time zone, and two patented global debuts in the domain of chiming watches: an acoustic alarm that strikes the alarm time and a date repeater that sounds the date on demand. The Grandmaster Chime took 8 years of development, and contains 1,366 parts. Patek calls it the “intelligent watch” as envisioned in its philosophy. The Grandmaster Chime, an ultra complication which houses 20 complications. It is indeed an intensely technical masterpiece.

Significant effort was also put into the highly ornate case, decked with a Hellenic motif through the bezel and case that extends even to the lugs. The lugs are also used as pivots for the case to allow a flipping motion for the user to rotate between the front and back dial. Although the hand engraving in itself is a masterful piece of art, its interaction with a large case, thick lugs and a generally hefty watch, creates some contention over the wearability and aesthetics of the watch. Impressive decorations all round, and a modern ‘mute’ button to switch on or off the alarm function.

A friend of Deployant Joe Koh, finds that “… it’s too complicated and the flipping function of the case is not the brightest idea, since you can’t flip it while its on the wrist. A reverso does it better.”

“Notable here is the absence of a tourbillon, though I do not in any way miss it. In fact, I find it refreshing that the Grandmaster Chime focuses so completely on the chiming functions and art of engraving…” says our friends from Quill & Pad. Functional on both sides, it is a marvel how all these functions can be squeezed into a single watch.

A fellow watch collector and enthusiast, Benjamin Kei weighs in, “The Grandmaster Chime is definitely a piece to be treasured in time to come. Much like all the previous grand complications from Patek. The sheer complexity of the piece is mind blowing and the finishing breathtaking. But on the other hand, the watch is made to be kept and not ready to be worn due to the size. I would love to be able to wear what I own rather than just take them out once in awhile to admire them.”

Deployant’s Robin Lim shares his view “I think that the Grandmaster Chime is a watch befitting the 175th Anniversary for PP. It is a masterpiece, considering how difficult it is to fit in so many complications into a tiny wristwatch. But my favourite is not that piece. It would be 5575G, aka the World Time Moon. I have a soft spot for Patek World Timers, and I think they executed this version very well. Very discreet too.”

Apart from the Grandmaster Chime, some other pieces like the World Time Moon ref. 5575 and 7175 as well as a ladies chronograph ref. 4675 were introduced. 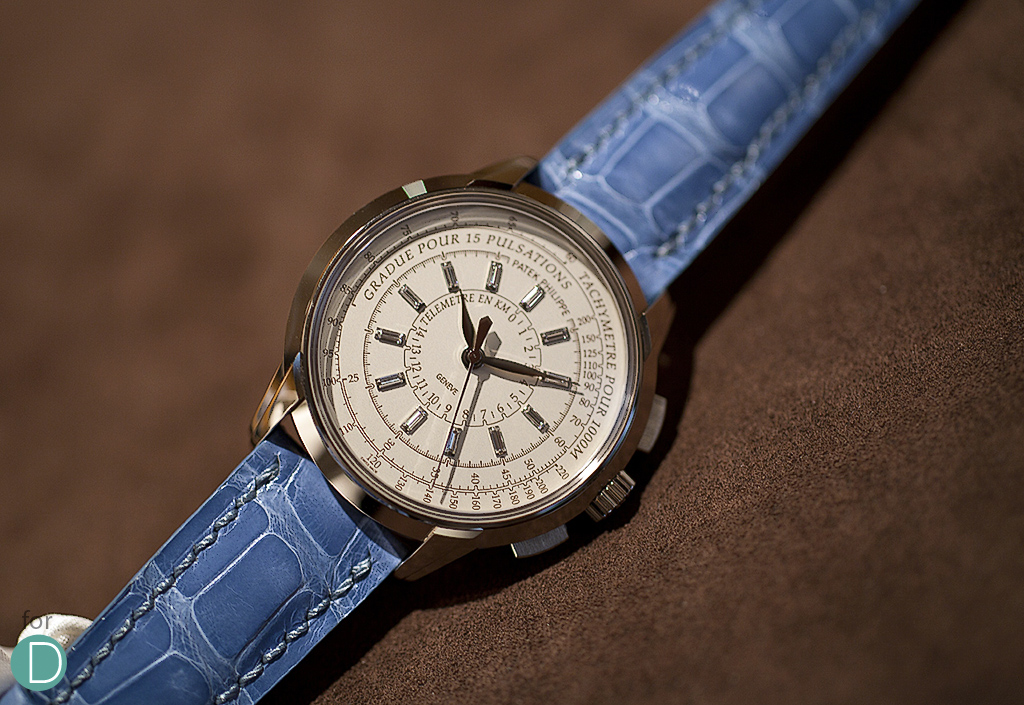 The ladies ref. 4675 is limited to 150 watches each in 18k rose or white gold, with baguette cut diamond hour markers. Two metallized glass discs take up the centre of the dial. One of the discs portray the night sky, while the other shows a realistic moon. The moon is detailed with craters and blemishes, like what is seen through telescopes, Patek Philippe’s first realistic interpretation of the moon.

So after looking at these other pieces and hearing the views of fellow collectors, my view is that the Grandmaster Chime was not intended to be a crowd pleaser, or an everyday watch. It is probably more of an esoteric holy grail that is meant to rest on diamond encrusted display shelves. When pit against competitors in the same weight category, like the Lange Grand Complication, or Vacheron’s Tour de I’lle, the Grandmaster Chime is more innovative and technically accomplished. But I would think that apart from some Eastern European oligarchs, most other connoisseurs would struggle to adorn this Grandmaster Chime. For the latter more quiet and subtle group, the offerings from Lange and Vacheron may be more appealing.

Then again, only 7 pieces of the watch was made, 1 for the Patek Philippe museum while the other 6 all sold to specially selected collectors. Another resounding success for one of the world’s most sought after watch brand.