At first glance, this may seem like any other Panerai watches. And it is not difficult to see why. In the eyes of non-Panerai collectors, many Panerai pieces look strangely similar. But the Panerai Radiomir 1940 Tourbillon GMT Oro Rosso (what a mouthful) is a little different. Like what the wise folks say: “Beauty is only skin deep”. Yes, the PAM 558 looks great, but its true beauty lies beneath that chocolate brown dial. Panerai have launched several new novelty pieces in this year’s Watches and Wonders, including the PAM 785 that we have featured recently. Few pieces stood out, and the PAM 558 is certainly one of them. Our first impression on the watch is certainly excellent, as the Oro Rosso case compliments the the chocolate brown dial rather well. The vintage-inspired lume beneath the sandwich dial adds a subtle but great touch to the timepiece. In terms of aesthetics, the watch is already scoring plenty of brownie points here. Hidden behind the dial is the tourbillon. Talk about subtlety and restrain.

For those who are a little observant, one detail on the dial stood out among the rest. Yes, it is the word “Tourbillon”. For the benefit of some, a tourbillon is a complication that is created to counteract the effects of gravity to increase accuracy of timekeeping. But one question arises: “Where is the tourbillion?” Ah, the folks at Panerai have hidden it; it is located discreetly behind the dial, and it is exposed only via the caseback. A little game of hide-and-seek, we supposed? 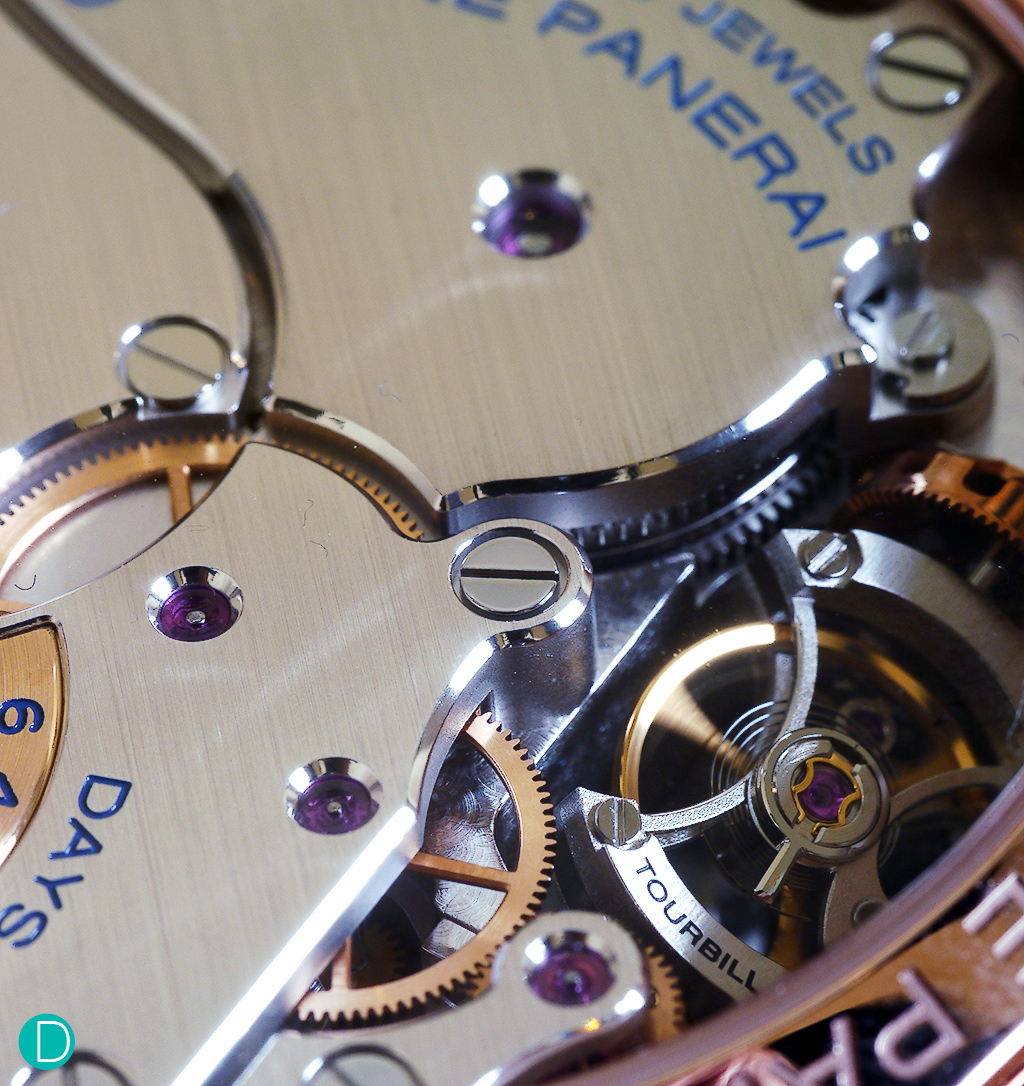 This tourbillon is rather different; the cage and escapement rotates on an axis that is perpendicular to the balance, unlike the usual which rotates parallel to it.

Since we are on the topic of tourbillon, we thought that it would be nice to shed more information with regards to Panerai’s effort. This particular tourbillon, fitted in Panerai’s own in-house Caliber P. 2005 movement, is a little special. Unlike the usual tourbillons, this one rotates on an axis that is perpendicular to the balance. On top of it, this tourbillon completes a rotation in thirty seconds, whereas the usual completes it in sixty seconds. These two features improve the accuracy of the watch, even though the changes are seemingly minor. Having said this, the movement also features a six days power reserve, thanks to the three barrel that is well hidden by the bridges. Considering that the PAM 558 has got so many complications, it is intriguing to see that the watch is rather clean; it seems that minimalism is something that Panerai sticks very closely and faithfully to. It is nice, in our opinion, to make the dial as clean as possible. The fact that even the tourbillon is hidden, which is something rather unorthodox, shows a rather reserved side of the timepiece. A tourbillon is an intricate and pronounced complication, and watchmakers will always try to make it the highlight of the timepiece. By concealing it, Panerai is telling us that it more focused on the intended purpose of the tourbillon (which is to improve the accuracy of the watch), rather than the aesthetic value of it. There is no right or wrong here; it provides us with a better insight towards each watchmaker’s ethos and values in watchmaking which we find it to be rather thought-provoking. The Caliber P.2005 is rather well-finished, and the gold accents add a nice touch to the bridges of the movement.

The 48mm PAM 558 is a limited edition piece, and only 30 pieces are available. We personally think that this is a nice effort from Panerai; it still contains the Panerai DNA, but it has also got a significant amount of horological value in it. Might this Panerai win some critics over? We would like to believe so.