The Vacheron Constantin Maître Cabinotiers collection is a special service which allow the collector to customize watches which meet their fancy. Here we are not talking of mere dial changes, or even small modifications to the movement. Here we are talking full bespoke service, where the client can pick and choose from any variety of complications. And not only that, but also challenge VC to make new ones. This was the service which saw the creation of the most complicated watch: the VC 57260, the Perpetual Calendar Regulator and the Retrograde Armillary Tourbillon. And this one, the Traditionnelle C.2755 with 15 complications. Dominique Bernaz gazing affectionately at the Traditionelle C2755. The look on Dominique’s face was one of admiration, not unlike that of a parent looking at his child.

In July 2006, Juan-Carlos Torres, CEO of Vacheron Constantin, came up with the idea to revive the “Ateliers Cabinotiers” as part of the plan for the expansion of the  “Maison” Vacheron Constantin”. The role of the “Atelier Cabinotiers Special Order” department was set up under the principles of the great Genevan tradition of the Cabinotiers watch workshops. The service enables for very special commissions, each custom made on and created on an individual basis.

No collections of catalogues here, only a listening ear. It all starts with a narrative: the client’s private story.

Each request, from the most simple to the most ambitious, is meticulously examined by an ethical committee set up specifically to ensure that only projects that correspond perfectly with the values and traditions of Vacheron Constantin are approved. Thereby allowing the realization of a dream for the future owner and also safeguarding the values of VC.

The Magnificent 6: Dominique Bernaz and his team

The team is headed since its inception by Dominique Bernaz. An interesting individual, with a distinct sense of style and taste. We caught up with Dominique at the Diego Asia Pacific’s Johnny Walker House. The location is quite an amazing setup. Very private, and beautifully decorated, with an eye to showcase the whiskies of the house. The VC Maître Cabinotiers team comprises of six. Dominique leads the team which includes 3 watchmakers and 1 engineer. The team are all in their mid 40s, and each have more than 20 years experience within VC. Of course, the team have access to the full resources of the Manufacture Vacheron Constantin. And use many of the exceptional skills housed in the main maison, like engraving, enameling, and engine turning. Dominique Bernaz at the Johnny Walker House. Whisky is being showcased in an elegant setting at this beautiful location. Photographed November 2016.

Interestingly one of our favourite VC watches, the Corne de Vache, was initially conceived to be a Maître Cabinotiers timepiece. The client, then also an employee of VC, had requested for a remake of a historical watch, updated. VC thought this was such a great idea, that it went on to make it a production piece. And a very successful one indeed. The VC Maître Cabinotiers timepiece, Traditionnelle featured here is a watch which was conceived by the team from the groundbreaking work they pioneered for the World’s Most Complicated Watch: the VC 57260. Unlike the 57260, which is a commissioned piece by a collector seeking a watch which will take the title, the C.2755 was a watch created by the team. Some 80 prototypes were made in the process of creating the 57260, each created to test different aspects. The team distilled some of the concepts learnt, the ideas formed and made the Traditionelle C.2755. An exceptional watch of the highest order. The VC Maître Cabinotiers Traditionelle C.2755. The dial is opalin guilloché dial with an aperture to showcase the magnificent tourbillon.

Dominique was able to quickly find a buyer for the watch, and when we saw and photographed the watch, it was already sold. The price? Well, its not for sale anymore, but Dominique hinted it north of CHF 2,000,000. Now two million Francs is a lot of money, but this is a lot of watch.

The price tag strikes us as more eminently palatable, if such a huge price can be called anything but enormous, than the recent sale of the Patek Philippe Ref. 1518 in SS by Phillips, which went for a cool CHF 11,002,000 (incl Buyer’s Premium). But for those with this amount of disposable cash, this is a good place as any to stop and ponder a moment. The classic and magnificent VC tourbillon, with the VC logo on the cage as a signature. 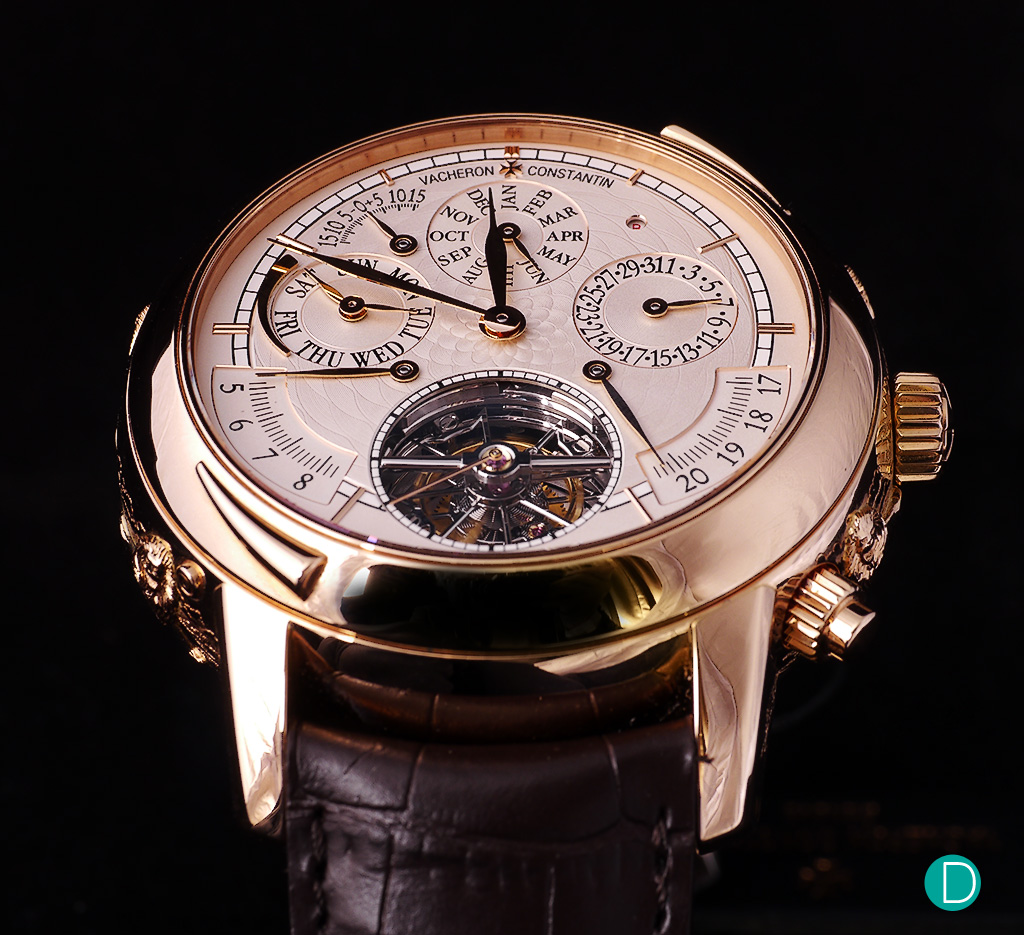 The dial shows multiple complications and the tourbillon.

The back of the timepiece with four complications : Sky chart, Age and phases of the moon, Sideral hour & minutes for solar time, Seasons and zodiac signs. And also indications of solstices and equinox. At the rear, more complications are displayed.

Needless to say the workmanship is immaculate. Beyond reproach, and equal to the best anywhere. After all this is a watch crafted by masters in their own fields, working with minimal constraints. All finishing is done exceptionally well. And no leaf is left un-turned. The result is a magnificent time piece. The 47mm case has immense presence. Crafted in 18k 5N pink gold, its case band are embellished with engraved motif of lions.

Both the watch works and the embellishments endowed on the Traditionelle C.2755 are at the highest level. The artistry of the engravings on the case sides, with the lions made in relief is a case in point. The work needed to be done on a massive 18k 5N pink gold slab, and the lions are hand engraved by removing the material which do not form the lions. The process is more painstaking and difficult than first thought, as the lions and the background must be polished to a high gloss finish. And then the background is engraved to create the landscape motif. A closer look at the hand engraved lions. Crown side. And from the non-crown side. The work is exceptional.

The case is rather large to accommodate the complications, measuring 47 mm case with a pattern of lions in relief engraving. The case is in 18k pink gold, with the Poinçon de Genève.

As mentioned, the Traditionelle C.2755 is a magnificent watch. It is unique, one of a kind. And masterfully thought through and beautifully executed. If we had to pick a nit, it would be that the watch is quite large at 47mm, but we guess it could not be made smaller and still be able to house the 15 complications which are expected to function reliably.

Many thanks to Vacheron Constantin and Dominique Bernaz for showing us this awesome watch. And for those who are well heeled and want to avail yourselves to the Maître Cabinotiers service, we strongly encourage you to make this indulgence. Call your VC office now.

As a teaser to the next episode of Rare Watches also featuring VC’s Maître Cabinotiers, here is the other set of watches Dominique showed us during our visit. Also jaw dropping awesome. And though still a work in progress, as 4 more pieces are needed to complete the collection, the set has already been sold. Stay tuned for the details.