Grand Seiko master watchmaker Satoshi Hiraga was in Singapore for a watch assembly demonstration of the new Grand Seiko Hi Beat 36,000. Deployant’s Nick Gould was on site, witnessing the exquisite craft and with it, the opportunity to discuss various matters relating to Grand Seiko including the introduction of Grand Seiko’s first tourbillon. 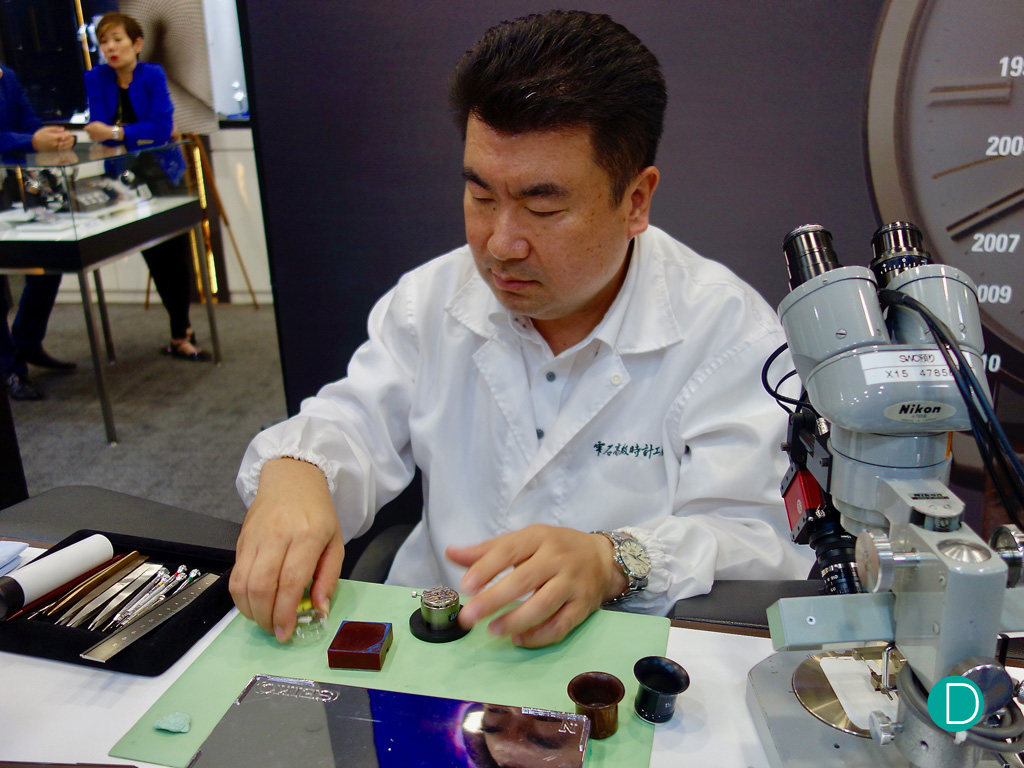 Deployant (D): Since joining in 1989, you have been with Seiko for 27 years.  What led to you pursue a career in watchmaking?  What developments have you seen come to fruition during your time at Seiko?

Satoshi Hiraga (SH) : At the age of 25 in 1995, I entered the national competition for watch techniques which involved having to diagnose what was wrong with a movement in a timepiece and to repair it.  In addition, the participants were asked to regulate the movement for chronometry. I came in first place and this was the turning point for me to become a watchmaker. To date, I have been directly involved in the development & creation of the Caliber 6S Series and Caliber 9S Series of movements.

D: Who do you admire in Japanese watchmaking and are there any watch makers outside of Japan that you admire?

SH:  I admire the superiors in Grand Seiko who have trained me during my time at the company and helped me refine my watchmaking techniques.  They are super professional and can tell if there is something wrong with a timepiece just by listening to it.

As for watchmakers outside of Japan, I admire those watchmakers who produced Swiss Made timepieces centuries ago without the use of any modern technologies.

At Baselworld 2016, the halls were abuzz with the news that Seiko had unveiled their first ever tourbillon, the Credor Fugaku.  We previously covered it in our review here and were keen to ask about the timepiece since Higara san was the master watchmaker responsible for assembling the movement. D: At Baselworld 2016, Seiko surprised everyone with the release of the Credor Fugaku Tourbillon, the first ever tourbillon from Seiko.  Why a tourbillon?

SH: It started with idea of how best to show the consumer the beautiful motion and silhouette of a mechanical movement. We concluded that a tourbillon was the best way to demonstrate this in the Credor Fugaku.

D:   Was the design architecture of the tourbillon based on Seiko’s own principles in order to distinguish itself from its Swiss counterparts?

SH: The team decided to make the tourbillon as slim and small as possible using the 68 caliber as a base.  The carriage for tourbillon was also made as small as possible to allow for maximization of space.  This enabled the usage of engraving & Urushi lacquering to express Japanese styling on the dial of the Fugaku.

D: Will we see Seiko design a tourbillon based on Japanese design principles?

SH: I am interested by the challenge of designing a tourbillon with uniquely Japanese movement architecture and it would be a good challenge. The tourbillon from the Credor Fugaku

Here is a video from Seiko to show you the tourbillon in action:

D: Will we see a tourbillon in a Grand Seiko timepiece in the future?

SH:  Accuracy is very important for a Grand Seiko timepiece and there is a possibility that it could happen in the future but we cannot confirm or deny it.

The Grand Seiko Hi-Beat 36000 GMT Limited Edition (SBGJ005) was the first Japanese watch to win a prize at the prestigious Grand Prix d’Horlogerie de Genève, considered “the Oscars” of the watchmaking world.

D: In 2014, the Grand Seiko Hi Beat 36,000 GMT won the Petite Aguille prize at the GPHG.  This must have made you and your team very proud, to have your hard work acknowledged?

SH:  The whole team, from the designers to the finishers was very honoured receive the Petite Aguille prize and the confidence of whole team was greatly increased as our hard work was recognised. D: The Grand Seiko Hi Beat 36,000 range currently includes time only pieces and some with the additional feature of GMT/2nd Timezone.  Will we see a chronograph model in the Hi Beat collection in the future?

SH: I cannot comment at this stage but I am interested in the challenge of doing so.

D:  Do any of the manufacturing processes from Grand Seiko get passed on to improve the rest of the Seiko range such as Presage and Seiko 5?

SH:  In manufacturing Grand Seiko timepieces we use Micro Electric & Mechanical Systems (MEMS) to produce certain parts of the movement.  This does trickle down to the rest of the Seiko lines such as Presage and Seiko 5. D:  Which Seiko timepiece is your daily wearer?

SH:  My daily wearer is a Credor Pacific Chronograph but as I am traveling  I have a Grand Seiko GMT on my wrist. The Grand Seiko Automatic GMT on the wrist of Master Watchmaker Satoshi Hiraga.

We would like to thank Seiko Singapore for the arranging for the interview and Mr Kenichi Maeda, Senior Manager from the Sales Department of Seiko with translating.