The most complicated watch ever made. That is the Press Release tagline. And repeated by almost every site reporting on the new release. Squeezing 57 complications into a  timepiece is of course extremely complicated and worthy of a medal. En route, the Vacheron Constantin 57260 has created a truly huge watch, measuring 98mm in diameter and 50.55mm thick and weighhing 960grams. A transportable clock perhaps?

However, at a simple glance, the watch looks simple enough. On closer examination, the number of indicators and number of hands boggles. The watch has dials on both sides The Vacheron Constantin 57260…showing the watch being rotated from front to back.

The number of complications race

Horology over the years have pursued the race to put more and more complications on a timepiece. A robust base movement is needed, with enough power to drive the complications. And then layer upon layer is piled on. With the VC 57260, the complications make up 4 additional plates over the base plate.

For ease of reference, we are using the number of complications claimed by the maker. This may mean that sometimes we are not comparing like for like, but as it is often difficult for us to determine if a particular function is a complication, this is perhaps the best notation.

With 57 complications, the VC 57260 trumps the previous record holder, regardless method of counting. The previous record holder was the Patek Philippe Caliber 89 which has 33 complications. The Caliber 89 is almost as large, measuring 89mm in diameter, 41mm thick and weighing 1100 grams. So the massive size comes with the territory, as it is essential to contain the layers upon layers of plates.

The other notable Patek Philippe is the Graves Super Complication, which sold by Sotheby’s for CHF 23,237,000 in 2014. It had 24 complications.

Compared to other watches in a wristwatch format, the Patek Philippe 5175 Grand Master Chime is perhaps one of the most complicated and is equipped with 20 complications. This was released to mark Patek Philippe’s 175th Aniiversary in 2014. The PP Ref. 5175 measures 47.4mm in diameter and 16.1mm thick.

And in 2013, the A. Lange & Söhne Grand Complication was released. This watch is inspired by the 42500 we mentioned earlier, bearing the same complications but set in a wrist watch format measuring 50mm in diameter, some 20.3mm in height.

Either in pocket watch (or transportable clock) format or wrist watch format, Grand Complications are huge timepieces. And somewhat debatable if one can wear it comfortably in one’s pocket or on one’s wrist, though both the PP 5175 can be viewed as borderline wearable.

As the specifications and details on the movement have been published by our journalist colleagues elsewhere, we will not repeat those but go straight into our reactions to the Press Release and high resolution Press photographs. For a detailed specification list and description, please click here for the official Vacheron Constantin version. The front dial of the Vacheron Constantin 57260 is an epitome of design legibility. Despite the number of indicators it is showing, it remains legible.

There is no denying that the VC 57260 is a beautful work of art. The layout to cram those indications (some 55 indicators) into a format which is clear and legible is a study of horological excellence.

The final product is in an extremely well polished (no pun intended) package, yes a very large package as we have mentioned. But one which still remains elegant and very beautiful. Whatever angle we look, from the front dial, from the back dial, from the sides, and even on the bare movement, it is truly a work of art.

The movement is also amazingly complicated…naturally. And a joy to behold. The mechanical complexity is one aspect due to the number of functions, but the layout required by the legible dial design makes the movement layout even more challenging. As we are fanatic about tourbillons, we take a slightly closer look at the Armillary sphere tourbillon used in the movement. 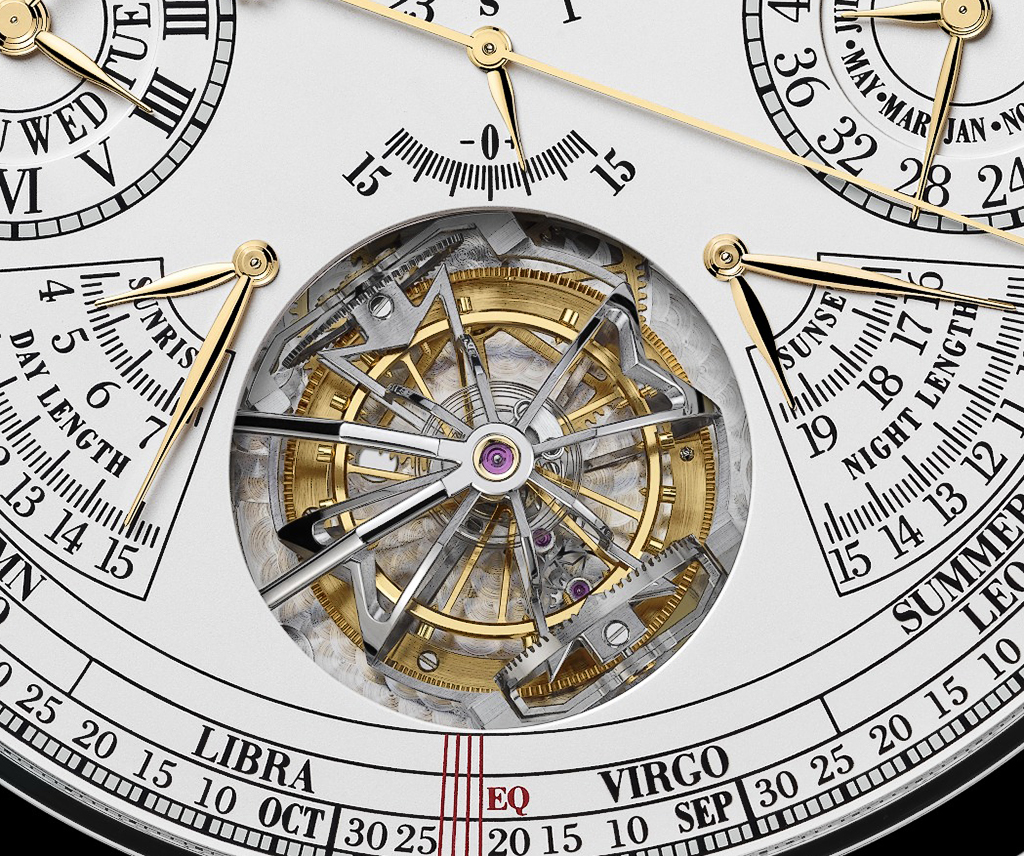 The tourbillon detail of the VC caliber 3750

It features a triple axis tourbillon, with the cages turning at 1 minute a revolution and 15 seconds a revolution with a cylindrical hairspring. It is not clear what is the rotation speed of the third cage.

As can be expected, the finishing is to be top drawer. We have yet to see the actual watch, but examining the high resolution Press photographs provided, it looks to be immaculate.

As mentioned, full specifications and technical details have been published in our friends’ sites. Most repeat the mantra of Most Complicated, implying more complications the better. We take a different approach. The big number of complications are a feature, not an end to itself. If the watch is poorly designed, or difficult to read the multitude indicators, we feel it has failed. But in all accounts of our brief encounter through the official Vacheron Constantin Press Release and high resolution photographs, the 57260 seems to have conquered the high number of complications very well.

We found the voice of reason in our friend Suzanne Wong’s piece on Revo-online to be perhaps the only one speaks out against the race to add more and more complications to a watch for the title Most Complicated. She speaks about what is special about this timepiece. We agree and so will not repeat but commend you to read the piece.

Our conclusion is that while we are not merely impressed with the complications piled one on the other, even when the complications count reaches a staggering 57, we are amazed with the work Vacheron Constantin has done to create the 57260. Its dials are a model of legibility. The case is a paragon of beauty. And the layout of the various complications are logical and clean, taking into account technical virtuosity and aesthetic excellence. The finishing seem top grade and of course we need to mention the mesmerising beauty of the triple axis tourbillon.

We hope to catch a glimpse of this huge timepiece in Watches and Wonders in Hong Kong, and perhaps spend some time in its presence. Not only to photograph and capture its essence. But also to ponder, to wonder, and to admire the depths of human ingenuity.  Quo vadis, complications?