Vacheron Constantin’s Maître Cabinotiers service is perhaps an unique offering by a Grande Maison to allow collectors to customise their timepieces. As we have covered in our earlier in-depth review on the C.2755, and the VC 57260, the client is able to work with Retail Director Dominique Bernaz to make fully bespoke watches. In this article, we explore another of the magnificent creations made by Dominique and his team: the Chinese Zodiac Set. The Maître Cabinotiers Chinese Zodiac Set, still awaiting four more pieces to completion. But the set is already spoken for.

The Chnese Zodiac is similar to, yet different from the western zodiac. Both have time cycles divided into 12 parts. Each part is named after animals (real and mythical), and each generally associated with a culture of ascribing a person’s personality or life events based on one’s relationship to the cycle. The western cycle consists of linking to the 12 months in an annual cycle. While the Chinese cycle is linked to a 12 year cycle. The 12 animals are Rat, Ox, Tiger, Rabbit, Dragon, Snake, Horse, Goat, Monkey, Rooster, Dog and Pig.

In the grand scheme of things, each cycle of 12 years is part of a branch, which itself is a cycle of 4 branches, viz Water, Wood, Fire and Metal. Dominique Bernaz, Retail Director at Vacheron Constantin whose team is responsible for the Maître Cabinotiers.

The VC set comprises of 12 watches, each depicting one of the 12 zodiac animals.

This is not the first time a watchmaker has offered a set of all 12 zodiacs. De Bethune has their Imperial Fountain Set is one recent example.

This is also not the first time VC has depicted the Chinese Zodiac. But in a still on-going series, their Métiers d’Art Collection have featured each animal zodiac in a limited edition which is announced for each year corresponding to each animal. For example, we reviewed the Métiers d’Art Legend of the Goat for the Year of the Goat (Jan 2015 to Jan 2016), and for the Year of the Monkey (Jan 2016 to Jan 2017) with the Legend of the Monkey.

So what’s new in the VC Zodiac Set? Domique and his team have decided to create a new set, to be sold only as a complete set, with all the zodiac animals, and done in typical Métiers d’Art virtuoso style. Here is where the Maître Cabinotiers draw from the wealth of the skills base from the depths of Vacheron’s Métiers d’Art team.

The designs of the animals will not be the same as those previously offered. And the interpretation of the design has a decidedly Western feel, instead of the more traditional Chinese adaptations. We will see this later in the detailed pieces.

The same base movement on all the watches, and the team settled to make all cased in platinum. The movement used is the C.2460. and is the same as the one used in the Métiers d’Art Legend of the Chinese Zodiac Collection. The movement lends itself particularly well to Métiers d’Art works as the time display is spread in a peripherial locus. The center of the dial left open to display the art works. The VC C.2460 used in the Chinese Zodiac series.

The C.2460 is automatic beating at 28,800 bph, with approximately 40 hours of power reserve. The movement is able display the day of the week in aperture, minutes, precision moon phase, date, month in aperture, hours. And certified with the Poinçon de Genève.

The set is yet unfinished as we viewed it. Out of the 12 zodiac animals, VC has completed depicting 8, with 4 more to go. Here are the watches which have been completed.

The first animal in the Chinese Zodiac is the Rat. In the VC depiction for this unique collection set, the rat looks like the Ratatouille from the movie of the same name. The Métiers d’Art elements are enamel miniature, engraving and guilloché. The Ox is the second animal in the Chinese Zodiac, and here it is depicted like the charging bull often seen outside the stock markets in financial centers. The Chinese Ox is usually more serene, and depicted in a paddy field landscape background. But here it is vibrant and resplendent in enamel miniature, engraving, guilloché. VC Maître Cabinotiers Chinese Zodiac, the Ox.
The eyes of the bull looks a bit unusual at this angle, but with the watch on the wrist, the ox looks like it is looking right at the viewer.

The next animal is the Tiger. Here the Vacheron team’s tiger is particularly live like and animated. The colours are magnificent and the contrast with the yellow gold fur with the black stripes are magnificent. Also done with enamel miniature, engraving and guilloché. The Rabbit is still a works in progress when we saw the collection in early November 2016. The work is accomplished with enamel miniature, engraving and guilloché. 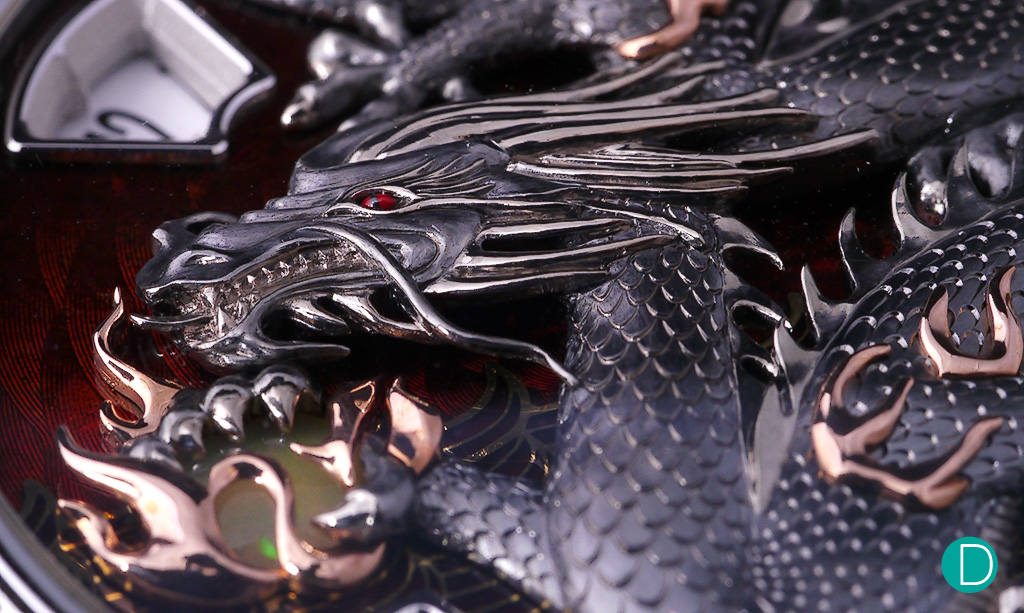 Detail of the dragon showing the delicacy of the works. The entire collection exhibit the 3 dimensional sculpture shown here on the Dragon’s head.

The Snake was still a work in progress when we saw the collection in early November 2016.

The Chinese zodiac horse is usually depicted as galloping with gusto, to signify vigour and progress. The horse imagery selected by VC for the Horse is again a Western view. To our eyes, the horse looks like it is in the wild, and free but not caught in motion. A more serene depiction. The work is done with enamel miniature, engraving and guilloché. The Goat is shown more like a sheep ram than the traditional notion of a domesticated goat. The work is done with enamel miniature, engraving and guilloché. The Monkey was still a works in progress when we saw the collection in early November 2016.

The Rooster looks very vibrant and shows off as a very proud character. The sculptural elements of the rooster’s tail is particularly magnificent, and very 3 dimensional. The vivid use of colours help with the energy of the depiction. Also done with enamel miniature, engraving and guilloché. And finally the Dog. Again a very Western outlook on the image of the dog. The dog looks like one of the hunting pointer dogs, out and about in a hunt, faithfully waiting for the master’s shot to quickly dash to retrieve the prize. Also done with enamel miniature, engraving and guilloché. The Pig was also one of the four which is a works in progress when we saw the collection in early November, 2016.

The entire set is quite magnificent. The Métiers d’Art works are executed by the experts in each of the fields and beyond reproach. We think it is a brilliant idea to execute the set from a Western perspective instead of the more common traditional Chinese view. By the way, we were told by Dominique that the set has already been spoken for. The purpose for showing us the set to share with our dear readers is to showcase the level of work and artisanal excellence that the VC Maître Cabinotiers can offer. And Dominique and his team encourages readers who have ideas for their own unique watches to be in touch. Dominique Bernaz. Retail Director of VC, but in reality an extraordinary individual with refined tastes who is able to guide the collector seeking unique pieces.