Paul Newman, the legendary actor, race car driver and philanthropist, is best known in the world of horology for a particular Rolex Daytona that he wore. These models are known today as a “Paul Newman Daytona” by collectors.  But is there a possibility he owned a Rolex dive watch in addition to the Daytona that is synonymous with his name?

With a bit of spare time recently, Google Images was brought up and the name Paul Newman was entered into the search bar. We were aware that Paul Newman wore timepieces before he was gifted his special Daytona and were flicking through the images for fun.  Then we stumbled upon one which raised an eyebrow.

The image is of Paul Newman hugging his wife Joanne Woodward affectionately.  What got our interest was the watch on his wrist. 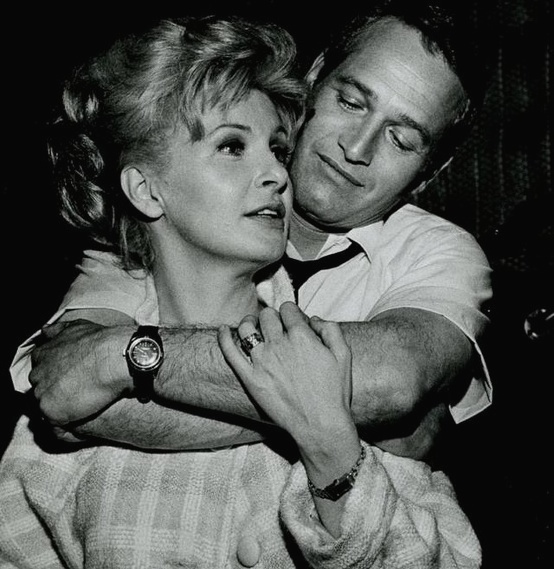 Paul Newman with a Rolex tool watch before his Daytona?! It certainly looks like it but we can’t be 100% sure.

The watch is not on a stainless steel bracelet and appears to be on a leather strap, possibly even a bundstrap. The dial appears to be in the classic configuration of the early Submariner with the triangular marker at the 12 o’clock position, the baton markers at 3, 6 and 9 o’clock position and luminous dots at the 1,2,4,7,8 10 & 11 o’clock positions.   The lack of crown guards and what appears to be a regular sized crown are also promising signs.  The case of the watch appears to be around the 35mm mark, judging by how it looks a tad small on the wrist of Paul Newman.  It looks like there are 3 lines of text at the 6 o’clock position on the dial.

But we are not absolutely certain. Why? The tale of the bezel.  With the early Submariners  the bezel was marked for every 10 minute interval with hash markers for the in between 5 minute periods.  There definitely is a triangle marker present on the bezel of the watch in question.  It looks like there are clear indications on the bezel for the 15,30 and 45 minute intervals.  This bezel would be more inline with a Blancpain since it utilities the 15,30 and 45 minute configuration on their bezels.  There is also the possibility of it been a vintage Tudor!

The main issue is the photo itself which is only 640×500 approximately, making it a case of zooming in and trying to pick out the features of the watch. The text on the dial of the watch is also unclear making it difficult to make a positive identification on specific maker of the watch.

Given the context of the photo its very interesting that Paul Newman is wearing what appears to be a Divers watch.

We were able to find another image, but again it proves inconclusive if it is a Rolex or Tudor diver. It could be a completely different brand of watch, that also made divers pieces and looked similar to a Rolex. Is it a vintage Sub? That is the question we would love to find out.

This is certainly interesting and we would love readers to comment on whether they think it is a Rolex/Tudor or a completely different brand. If you can find a bigger photo of the same images we would love to hear from you as well.

We will continue the search with more research and try to hunt down a definitive photo as well as a year.  If he had a Rolex diver before being gifted his Daytona, this would be a major surprise!