As the cliché goes, a new year brings a new start. And what we would be a better way for a watch collector to celebrate his or her new year with a new incoming?

Oh, and of course, why not do something different when you are at it? Why not try a brand that you might not have heard of, or something that you will not usually venture into? It’s the new year after all, and you might be pleasantly surprised for what you are getting yourself into.

So, without any further ado, let us commence our first Throwback Sundays article for 2016 with six underrated/ overlooked timepieces in our archives that one should consider having for their first purchase in the new year! We kick-start the article with one of the more affordable and interesting offerings: the Ball Engineer Hydrocarbon AeroGMT.

Ball Watches, as some might have known, were originally created for use by engineers in a harsh railway environment. But in today’s context, the watchmaker is more well-known for their use of micro gas discharge tubes which gives the watch a rather bright lume when it is being exposed to the dark. The Hydrocarbon AeroGMT, notably, is one the latest novelties from the American watch company. The watch, following the traditions of the brand, is built with robustness and functionality in mind. Notably, the movement features a three time-zone display, and it is COSC-certified movement as well.

Oh, and before we forget, the watch is priced below five grand (S$). Honestly, the Ball Engineer Hydrocarbon AeroGMT is a well-price timepiece, and we think that this watch has certainly got a lot to offer to the collectors. So, why not get your 2016 off with a bright start? The Hamilton Khaki Takeoff Auto Chrono, with the main case of the chronograph being detached from its body which holds the lugs and the strap.

We continue this article with yet another watchmaker that originates from America. Hamilton was founded in 1892 in Lancaster, Pennsylvania, and it is currently a member of the Swatch conglomerate. Over the years, Hamilton have produced many watches with innovative touches. It is even, in quite a few instances starred in a Hollywood movie. But we save that story for another day.

One of the watches that caught our attention in the Hamilton repertoire is the Khaki Takeoff Auto Chrono. The concept, admittedly, is pretty interesting. The dynamic timepiece is shaped like a stopwatch, and its watch head can be detached from the body to transform itself into an instrument that can be either used as a table clock (the package comes with an interesting presentation box, with 4 complimentary cockpit instruments) or an in-flight cockpit clock.

The watch, as we understand, is powered by the H-31 Caliber. It is based on the ever-reliable Valjoux 7750 movement, and it features a decent power reserve of approximately 60 hours. On top of that, it contains a chronograph function, as well as a date indicator. Overall, we think that this is a fun and reliable timekeeper, and a relatively affordable one as well. 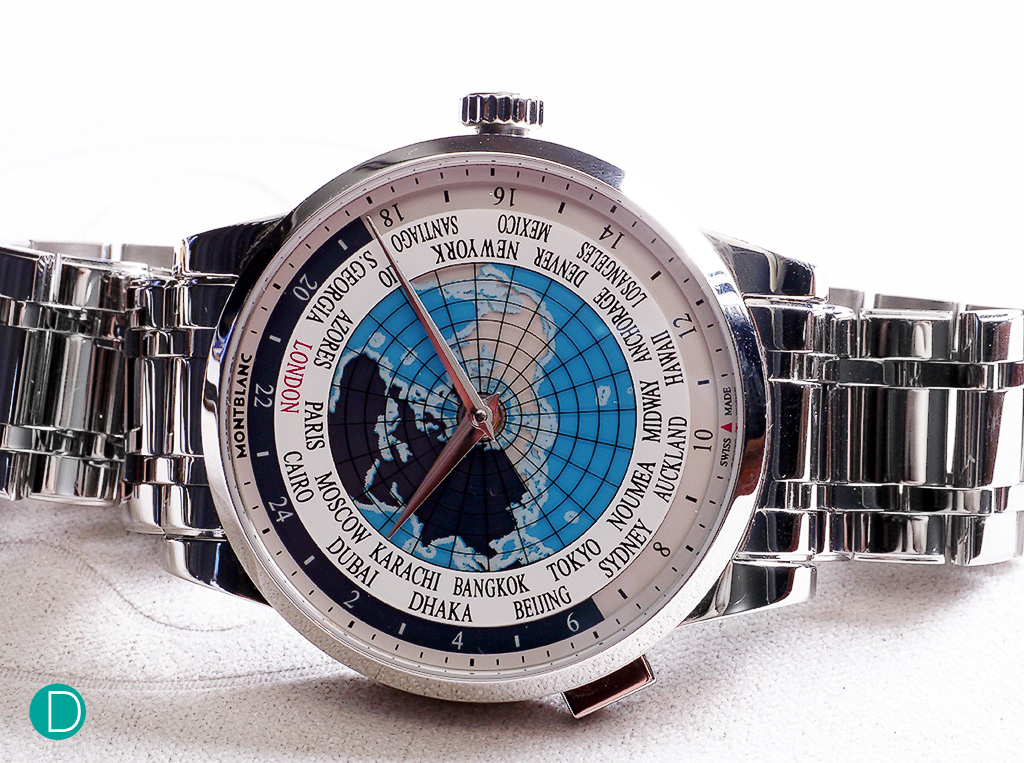 The Montblanc Heritage Spirit Orbis Terrarum. An interesting and functional timepiece for a frequent traveller.

Ever since Jerome Lambert had taken over the helm of Montblanc, we have seen an incredible transformation of this particular Swiss watchmaker. The Montblanc Heritage Spirit Orbis Terrarum, for instance, is one of the by-products of the new era, and we think that they have just upped the ante for their competitors in the horological industry.

For starter, the Heritage Spirit Orbis Terrarum is a handsome timepiece. It is really pleasing aesthetically, especially with the inclusion of a sapphire crystal dial that displays the Northern Hemisphere. This gives the dial some depth, as well as a certain level of visual impact that makes it stands out against the other World Timers too.

Additionally, the watch is powered by the automatic Caliber MB29.20, a movement that is arguably made in-house by Montblanc. This is because despite using a Sellita movement as its base, the world-timer module is produced by Montblanc and it is integrated into the movement seamlessly. And at S$6,300 (for the leather option), we think that this Montblanc (and some of their other pieces) certainly gives its competitor a serious run for their money. The Urban Jürgensen 1140 C, with a Detent Clock

The name, Urban Jürgensen, may be unfamiliar even to those who have a vast knowledge of timepieces or the horological industry. This is not a surprise, considering that it is a rather low-profile watchmaker. But do not let that fool you. While it might have been an unknown entity to many, but the brand itself has been around for more than two centuries.

The Urban Jürgensen 1140 C, frankly, represents what we would like our watches to be. It is simple, elegant, but very well-finished. We adore the classic teardrop lugs, as well as the hand-finished guilloché dial. Interestingly, the dial features both the Grains d’orges and Guilloché Damier patterns, and it takes up to 700 operations and takes 2 full days of hand work to complete on a guilloché lathe. The attention to detail is simply amazing, down to the smallest ones like the curved flame-blued hands. On top of that, the watch is fitted with a revolutionary Pivoted Detent Escapement, and this new caliber had attained the Chronofiable® certification.

In a nutshell, we think that the Urban Jürgensen 1140 C is an excellent watch that is both technically and visually impressive. We think we might have just fallen in love once again! On the surface, the F. P. Journe Chronomètre Optimum may look like a deceptively simple timepiece. After all, the watch is fitted with only the power reserve indicator as an addition to the usual time-telling complication. But do not let that fool. Beneath that magnificent dial lies a movement that contains a combination of complications and mechanisms that François-Paul Journe once mentioned that he would fit into a watch if he had to make one for himself.

The Chronomètre Optimum, notably, is a concept based on the Tourbillon Souverain Remontoir d’Egalité. The latter was one of the first watches to bear the F. P. Journe nomenclature on the dial, and it was one of the most revolutionary wristwatches at that point in time. It features the remontoir d’egalité.  In later versions, a seconds hand is mounted on the remontoir, resulting in a seconds morte. The seconds hand takes one jump every second, it makes it seems as though it is quartz watch. An in-depth view on the technical bits of this timepiece can be found in the review article here.

One point to take note, interestingly, would be the finishing of the watch. The earlier pieces, as we have noted, features a rather rough and raw feel. It even gives off the vibe that it was made in a garage, or in a shed at the back of someone’s house. However, over the years, we think F. P. Journe have improved their finishing. Quite drastically. The watch feels much more refined, with greater attention to smaller details.

Overall, we think that F. P. Journe is worth a look. Not only are the watches stunning aesthetically, but we feel that the movements are designed rather nicely with great attention towards complications and mechanisms. . We end this article with yet another under-rated timepiece in the high-end category: the Parmigiani Fleurier Tonda 1950 Tourbillon.

Parmigiani, as some might have known, is a fully in-house and independent watchmaker that focuses on high-end dress watches. However, it is often overlooked by collectors who tend to stick with brands that are more well-known like A. Lange & Sohne, or one of the “Holy Trinity” watchmakers. But it does not mean that Parmigiani’s watches are slouches; in fact, we think that they are capable of matching the capabilities of these giants! Take the Tonda 1950 Tourbillon for instance. This particular example features its classic round case with curved lugs, coupled with a flying toubillon that is can be seen from the cut-out of the exquisite eggshell textured ecru dial. The finishing is done rather nicely too, especially in the finer details like the anglage on the plates and the engravings on the platinum rotor.

This 40.2mm Tonda 1950 Tourbillon is elegant and well-made. It makes a nice dress watch.

We have just concluded our first Throwback Sundays article of 2016. Today’s article covers watches that may sometimes be overlooked or are lesser known to many collectors. Although they are not as well-known, but we feel that a handful of them offer the same, if not better, quality than some of the mainstream luxury watchmakers.

Anyways, we hope that you have enjoyed this week’s article. Most importantly, we hope that we have highlighted some of the lesser known watchmakers to our readers. It is a new year after all, and we think that it might be a good time for collectors to go beyond their comfort zone to collect watches from these less mainstream brands. As usual, do share with us about your thoughts on our selections. And till the next article, ciao!