We caught up with Stephen Forsey, co-founder of Greubel Forsey. A man who speaks freely and openly, belying the fact that he is one of our proclaimed “gods” of watchmaking. Humble and easy going, yet proud of his work and what Greubel Forsey have achieved. We spoke of divers issues, and touched on the Le Garde Temps Naissance d’une Montre project, the art of fine finishing, and the state of the high end of the haute horogerie industry. Listen in. As the author and Stephen have been friends for close to a decade, the meeting was casual, and relaxed. Stephen’s easy going character was apparent, as was his English humour. We dispensed with the usual introductions, and went straight to what was on the author’s mind for the last few weeks. Rumours abound everywhere that Greubel Forsey bought the watch, or somehow rigged the bid. After all, it was common knowledge that many auctions have seeded buyers with a pre-agreed strike price. And also that many companies “secretly” buy back pieces, sometimes in the guise of setting up a museum collection. But this was not the case for this auction. Stephen joked that they could not afford to bid that high. He said that they were not familiar with the auction process, having never bidded themselves. (a total of 30 Greubel Forseys have appeared in an auction to date, and Greubel Forsey themselves have never bidded for any) And they had no Plan B, in case there were no bidders, the watch would be withdrawn and remain unsold. A PR faux pas! The only thing they did to ensure a good bid was that by the auction date, they had sold all the 11 production pieces which retailed for CHF 450,000, and thus the prototype being offered for auction was the only piece left.

But what was clear was that together with Christie’s, they have done a great job travelling around the world to promote the watch and the project. Stephen, Philippe Dufour and Michel Boulanger went around the world to showcase the watch with potential buyers. Deployant attended the Singapore event where we filed this report. These travels helped identify potential bidders.

Stephen told us that seven of them were present on the auction day. Two were in the room in Hong Kong, and five others on the phone. The bidding started quickly and reached US$ 500k. Then at US$ 800k, 3 bidders were left. And thereafter, two bidders battled it out till the final hammer price. One was in the Middle East, and the other in Asia. And the winning bid was put in by someone known to Greubel Forsey. He had participated in the Collector’s Dinner before the auction, having specially flown into Hong Kong to attend. During dinner, he wore a Greubel Forsey GMT in White Gold.

The essence of the Greubel Forsey style can probably be distilled into the following: 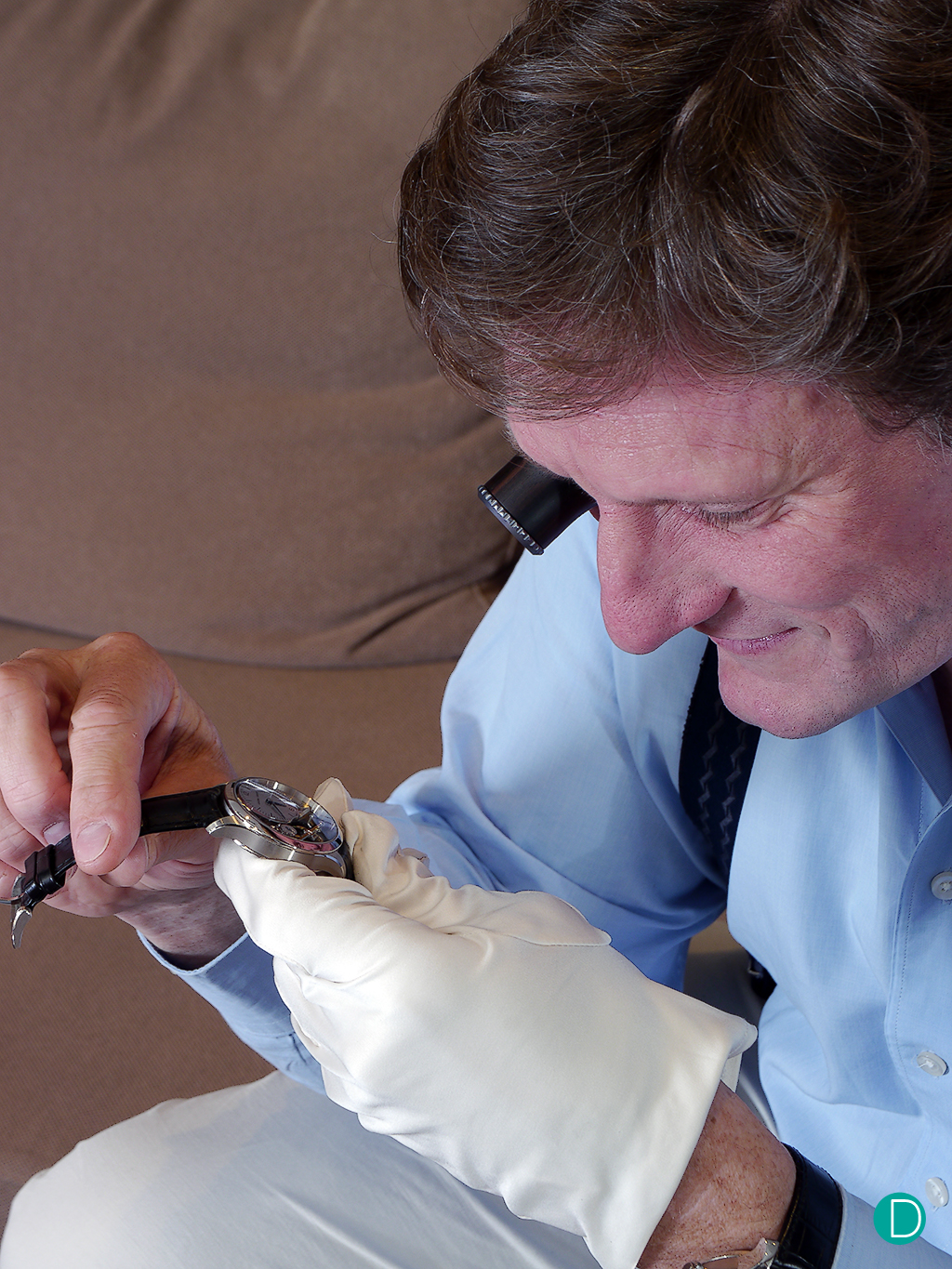 Stephen Forsey inspecting one of his watches, making sure every bit is supremely finished, and the characteristic symmetry and beauty of the architecture shines.

We continued our discussion with a case in point in the bevels or anglage.

The Greubel Forsey style for anglage is to cut a sharp bevel on the edge of the bridge, leaving two knife sharp edges. Philippe Dufour, for example uses a different technique – the edge is rounded off into a side profile which is convex, but perfectly even through the entire edge and beautifully polished. Some other makers attempt to cut a sharp bevel like Greubel Forsey, but finish off by buffing the knife edge to mask imperfections in line. This buffing is done with a cotton cloth, and it dulls the edge. It masks the imperfections, but looks pretty. In the Greubel Forsey, there is no need to buff the knife edge, as it is made to be straight and even throughout while remaining sharp. This requires consummate skill.

As a case in point, Stephen used the huge black polished steel bridge for the balance wheel on the Greubel Forsey Signature 1. The Signature 1 is the latest, simple watch released in SIHH 2016, and features a time only watch with a large, in-house balance showcased in the front with a very long steel bridge, tourbillon style. But the Signature 1 does not have a tourbillon, and neither is the balance inclined. Greubel Forsey Signature 1 was used as a case to discuss finishing.

The bridge is in steel, and designed to be very long. Maintaining the perfectly straight edge is a challenge. Next the bridge’s edges are anglaged, the chamfer being very large, and features the aforementioned sharp knife edges. This is indicated as the red arrow in the photograph below. The anglage is wide, maintains this evenly throughout the length, and polished to a mirror finish. Note the two sharp knife edges on each chamfer. Anglage on the balance bridge. This is more difficult than regular movement bridges as it is in steel instead of maillechort.

The yellow arrow shows the added degree of difficulty in making a circular anglage around the screw mount, and ending in two sharp angles, one inward and the other outward. The two double angles, one on each side of the bridge are independent of each other, but must be perfectly aligned to look its best. Not only that, but both must be aligned to the other two on the other side of the bridge. Any small misalignment is easily noticeable and looks ugly.

While on the Signature 1, Stephen also pointed out that the balance wheel is also designed and made in-house. Stephen and Robert (Greubel) had wanted the balance to take a specific form. The wheel’s outer perimeter is indented where the poising and timing screws are attached, and the finish of the wheel is peculiar as it is polished, anglaged and features many sharp angles.

Another characteristic, no 6 in the list above, is that all the wheels in the train which are made in-house, and finished on both sides. Each wheel has 5 arms, and the internal of the wheels are anglaged. The photograph below shows the polished anglage gleaming in the light, as indicated by the red arrow. Also seen are the 5 arms of the wheel creates 20 internal angles, which are finished so that each features a sharp angle. Wheel train of the Signature 1, the red arrow shows the polished anglage. Note that each wheel has 5 arms, and 20 sharp internal angles. The anglage on the bridges and cocks are also visible. As is the bridge over the barrel. Also note the beautiful bright rubies in gold chatons.