The Monaco Yacht show is the world’s largest mega yacht exhibition, where luxury yacht builders from around the world reveal their stunning creations. The highly-anticipated event takes place at Port Hercule in late September under the patronage of HSH Prince Albert II of Monaco. Ulysse Nardin commemorates its 9th consecutive year of being the event’s official sponsor with  a special edition Marine Chronometer Annual Calendar Monaco, in a limited edition of 100 pieces.

The Monaco Yacht Show is the reference exhibition in the super yacht industry. What better event, then, to showcase Ulysse Nardin’s seafaring heritage and DNA  which stretches back to 1846?

In 2016, to celebrate the 20th anniversary of the Marine Collection, the Marine Chronograph incorporated an annual calendar for the first time. The Ulysse Nardin Marine Chronometer features a neatly packaged annual calendar which is easy to read.

A mechanical annual calendar typically requires up to thirty components. But in pursuit of the principle of simplicity, Ulysse Nardin watchmakers managed to streamline the system to a mere 7 elements. Simple to use, beautiful to behold, this timepiece is the epitome of innovation in the service of practicality, as it requires a date adjustment only once a year. This achievement in purity and functionality celebrates the achievements of Ludwig Oechslin, the originator whose legacy is the quest for simplicity in even the most difficult complication.

This quest is upheld too in the UN-113 caliber, a movement – including the silicium escapement and balance-spring – made entirely in-house at the Ulysse Nardin workshop. It enables the calendar date-setting both forwards and backwards – yet another simplification.

Only 100 pieces of this extraordinary timepiece exist, a fact to which the “Limited Edition” engraving on the bracelet’s titanium insert can attest. With its COSC certification, the precision self-winding movement combines the coveted annual calendar feature with a 60-hour power reserve. 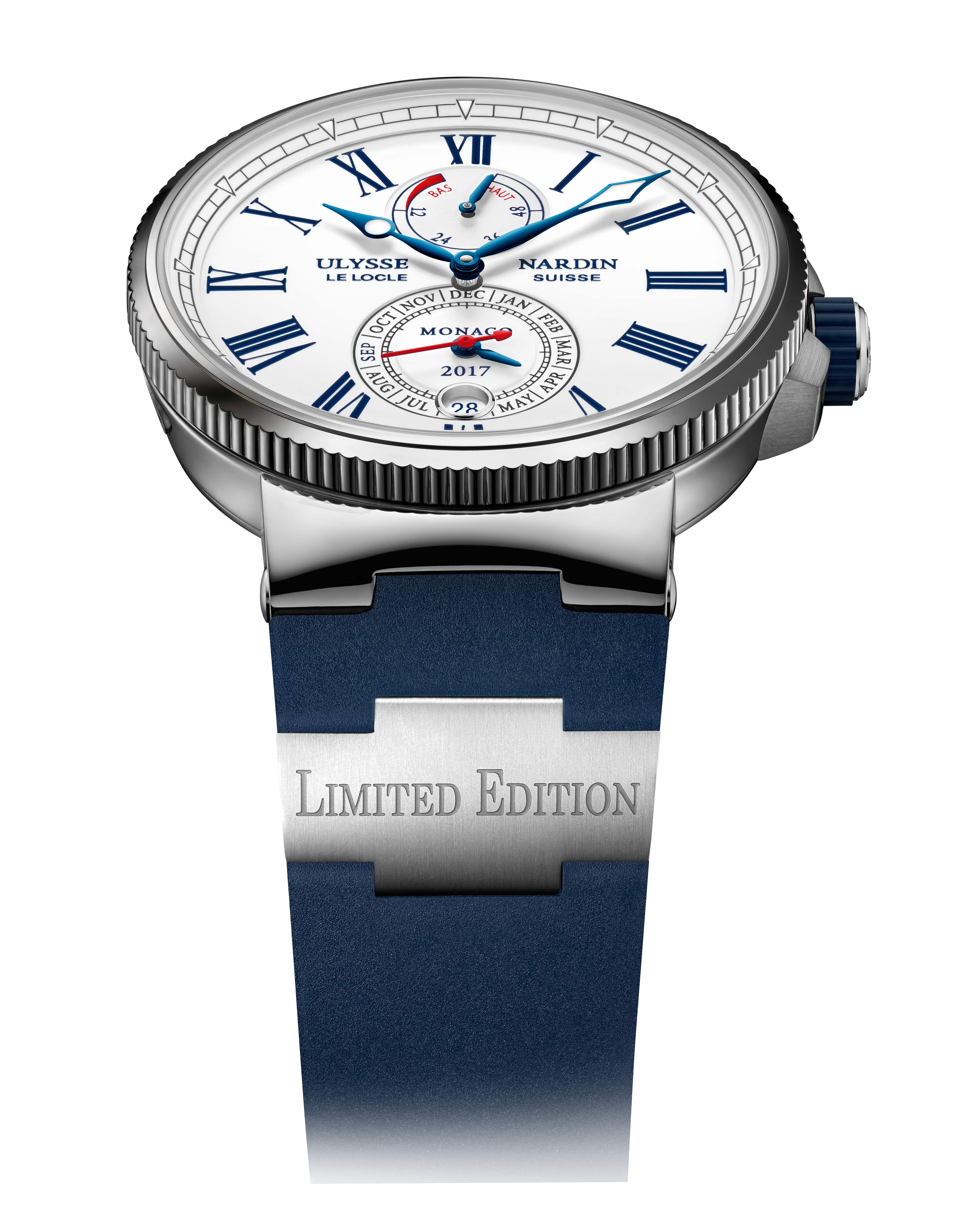 The fluted bezel and 43mm diameter lends an air of masculinity to the piece.

A celebration of the Monaco Yacht Show is revealed in several details on the white lacquered dial with its distinctive blue Roman numeral indexes – a feature of each timepiece in Ulysse Nardin’s Marine collection. A stunning tribute to the event of the year comes in the form of “Monaco 2017” inscribed on the dial. The dates of the event (27, 28, 29, 30) and the month of September are highlighted in blue, instead of black, on the date disc.

As you might expect for a timepiece with such an illustrious maritime heritage, the Marine Chronometer Annual Calendar Monaco is water resistant to 100 m, its 43 mm stainless steel case equipped with a fluted bezel and a rubberized screw-down security crown. An anti-reflective sapphire crystal reveals the UN movement in the open case back, and a rubber strap with a folding clasp and titanium element keeps it firmly in place.