Over the last week, the author had several encounters with off-roading. It was particularly fun, especially since we had a proper Land Rover to drive around. Naturally, being car enthusiasts, we took the car away from the normal roads, and tested it out on some of the more “interesting” paths – such as slopes and hills, grass fields, and muddy grounds.

There were definitely some hiccups along the way. The greatest one was probably when we were stuck on the muddy grounds – when the area was badly waterlogged. We had to improvise, and eventually we were able to get out after another Land Rover managed to winch us. It was certainly a hell of an adventure!

Well, those few days set to get us thinking. What would be a nice watch to wear, when we are going for off-roading with a massive car? Should we get something big to match the size of the car? Or should we get something practical and robust, in which it would be able to withstand any knocks or shocks when we might be carrying out some physical activities? After some considerations, we have come up with six watches that might be appropriate for such an activity. What have we selected? Let’s find out! We begin the article with a good ol’ Seiko – the Automatic Diver Series, also known as the “Turtle Reissue” by some collectors due to the case’s semblance to a turtle shell.

This particular watch that we have featured is the PADI edition, made specially to commemorate the partnership between Seiko and PADI. The watch features the red and blue colour combination, which pays homage to the corporate colours of the organisation. But what makes the watch stand out is its robustness and reliability. The Divers series has been known to be a solid watch, and owners have frequently brought it for their diving adventures. In addition, the movement – Seiko’s Calibre 4R36 – is well-built, and its performance has been lauded by many collectors over the years.

Priced at S$667, the PADI Diver is slightly pricier than the other versions of the Automatic Divers series. However, we reckon that it still offers a great value proposition, and it is certainly a timepiece that will perform well in situations whenever it is being called upon during an adventure. The Sinn U1 Camouflauge Edition. A rather interesting piece, comparing to the normal U1s.

For the regular readers of this series, the Sinn U1 is definitely not a stranger to anyone. This is one of our “go-to” pieces when it comes to having a robust and solid timepiece. It is not merely a coincidence, but rather, the U1 had time and again proven itself as a reliable timepiece when it is being called upon in tough conditions.

One of the reasons behind the U1’s robustness is due to its case construction. The U1 is fitted with a 44mm case that is constructed with Submarine Steel, and it is further reinforced using the TEGIMENT technology. The material is said to be six times stronger than conventional steel, and thus making it difficult to ding or scratch the timepiece. In addition, the watch has a water-resistant depth of up to 1,000m, which is another testament to the integrity of the watch’s construction.

The current edition is powered by Sellita’s self-winding SW200 movement (earlier versions were ETA), the Sinn U1 features a date indicator, as well as a minimum power reserve of around 38 hours. There are many variants of the U1 that were produced, and we feel that the Camouflauge Edition will be fitting for such an adventure. The watch is priced at US$2,160 (approximately S$2,900), and it is limited to a production of 500 pieces. The Chopard Mille Miglia 2017 Race Edition, with a pair of leather racing gloves.

Chopard is one of the watch manufacturers that had a long-standing relationship with the motoring industry. This can be attributed to Karl-Friedrich Scheufele’s love for racing and automobiles, which had led to the creation of the Mille Miglia collection many years back.

Although the Mille Miglia is not remotely close to off-roading activities, but we feel that this timepiece is a great option for someone who loves cars in general. This is because the entire timepiece takes its design cues from various components of a motor car. This includes the rubber strap that resembles a tire, and the crown that looks similar to a fuel cap. In addition, the black minute tracks and tachymeter scale are seemingly inspired by a car’s speedometer, and the red accents accentuates that as well.

Chopard is known to make great timepieces, and this Mille Miglia 2017 Race Edition is definitely special piece for someone who likes automobiles. The 44mm watch retails at S$6,840, and it should appeal greatly to anyone who is interested in cars or motor-racing. The new Bronzo with a blue dial. Big, solid, and definitely a kickass piece of horology.

The Bronzo is a timepiece with a rather interesting history. When it was first launched in 2011, it was a rather big deal in the industry. Bronze was not a common case material, and some watch manufacturers had made bronze watches with very limited success. The Bronzo (PAM 382) was perhaps the first bronze watch that had achieved commercial success. But more importantly, it kick-started a new trend, and since then many watch manufacturers are playing catch-up with their own iterations of bronze watches.

The new Luminor Submersible 1950 3 Days Automatic Bronzo, aka the PAM 671, is one of the latest creation in the collection. The watch, which features a blue dial, is drastically different from its predecessors that were fitted with a green dial. It gives the watch a slightly more modern appearance, while the green dial gave the watch a very rustic look. In addition, we feel that the combination work rather well, and it accentuates the bronze case and brown lume plots nicely.

Sized at 47mm, the Bronzo is definitely a massive watch. But it is an uber-cool one as well. The watch retails at US$14,400 (approximately S$19,380), and it is limited to just 1,000 pieces. We can definitely see ourselves wearing this on our next off-road adventure. 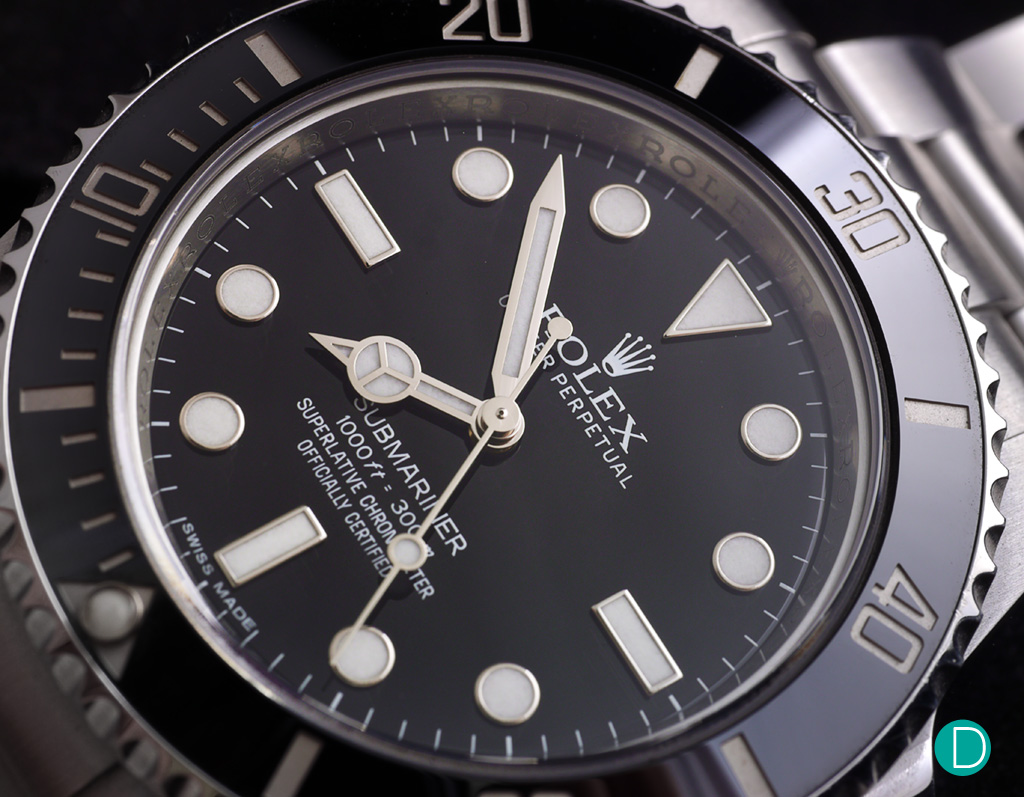 A close up on the Submariner.

When it comes to tool watches, the Submariner is definitely another watch that many collectors swear upon. After all, it has been around for more than half a century in various iterations, and the watch is known to be very reliable and solid in its construction.

The latest iteration – Reference 114060 – was launched in Baselworld 2012. Frankly, the watch looks pretty similar to its predecessor. In fact, the entire lineage does not deviate too much in terms of its appearance as well. But the 114060 certainly comes with several upgrades. The 40mm timepiece comes with a redesigned case, a ceramic bezel, as well as a new bracelet. In addition, it has a new movement as well, which features Rolex’s patented Blue Parachrom hairspring. The hairspring is said to be anti-magnetic and less susceptible to shocks, hence making the watch more accurate.

Priced at S$10,030, the 40mm Submariner is a watch that you can’t go wrong with. It is a timepiece with a timeless design, and a very well-built one as well. It is sure to survive in most of the tough conditions that one would encounter in any off-road trips, and definitely in style too. The Breitling Emergency II. A watch that one should have, if they are out for an adventure.

Finally, we round up the article with the Breitling Emergency II.

The Breitling Emergency is an interesting timepiece, and one that shot to fame when it was launched back in 1995. The main highlight of the timepiece, as many will know, is its PLB (Personal Location Beacon). Following that, in 2013, Breitling launched the second generation – the Emergency II. The Emergency II is now capable of simultaneously transmitting distress signals to the 406 MHz frequency intended for satellites, and a second analog signal transmitting on the 121.5 MHz homing and rescue frequency. It is a cool and yet functional feature that no other watch manufacturers can boast.

The watch is currently available in many different variants, each with a unique combination of dial and strap colours. The 51mm timepiece is fitted with a SuperQuartz movement, and it retails at S$21,000. It is certainly a cool watch to own, and one that is definitely functional and have for any adventures in the wild.

In this week’s article, we have featured six different watches that we would like to bring for an off-road adventure.

Generally, these six watches, sans the Breitling, are not fitted with any additional functions that an off-road driver would find it useful. In fact, we do not seem to have any watches that are created solely for this targeted group of collectors. Perhaps the Zenith Land Rover might be a consideration, but that too is in name only, and does not have any special features for off road motoring. But overall, perhaps a special feature is not necessary as we reckon what is important would be the build quality of the watch – they should be big and sturdy, and preferably susceptible to shocks and tough environmental conditions that is thrown straight at it. After all, that’s what off-roading is all about, isn’t it?

We believe the watches that we have chosen in this week’s article fit the bill nicely. They are all very well-built, and they are mostly known to function well in many environmental conditions. The Rolex, Seiko, and Sinn, for instance, are tool watches that are highly regarded for its reliability and robustness. The Breitling, on the other hand, is definitely useful in emergency situations. As for the Chopard and Panerai, we feel that its appearance and characteristics would greatly appeal to an off-road enthusiast.

Well, do you agree with our selections? If not, what are some of the watches that you will wear for an off-road adventure? Let us know in the comments section below!