The end of the year is near. And as usual, most of our schedules will definitely be packed with a plethora of parties and celebrations to end 2016 with a bang. Here are our suggestions for a party watch.

When it comes to such occasions, it is certain that people will want to dress well. This may be a visit to the hair dressers, or a new pair of nice shoes, or bespeaking a new suit. Oh, and watches. How can we forget about that! A good watch will surely complement the clothes that one wears, and a right one will make an individual stand out among the crowd.

Still not convinced? Then take a look at the selections that we have made below, and you might want to try wearing any one of them to any social events. Let us know if it makes a difference!

The V-series is one of SEVENFRIDAY’s collections, featuring a unique dial and case design.

We begin the article with one of the hottest moderately priced timepieces that have graced the horological world in the recent years: SEVENFRIDAY.

SEVENFRIDAY might have been a new kid in the block, but that does not stop them from offering collectors interesting watches. What particularly sets the brand apart is its unusual and bold design, usually with a special kind of twist in the way it tells time. The V-series, for instance, utilizes hands and a rotating disc in the middle to tell time, and requiring some math. Not intuitive, but then again, it is meant to be different. Details on how to read the time on the watches shown above can be found in our review here.

The 44.3mm watch is fitted with a rather unconventional case design which features two protrusions on the left for the quick strap change mechanism. The watch is also equipped with an NFC-chip for interactive features. Some to be released in the future, and for now, one to allow users to authenticate the watch and register it with the company. Overall, at S$ 1,778, we feel that V-series from SEVENFRIDAY offers collectors something different, at a relatively affordable price point.

The Tudor Black Bay Bronze is perhaps one of the best novelties that came out of Baselworld 2016. It is no coincidence that the watch was also awarded the prestigious “Petite Aiguille” prize in this year’s GPHG – the equivalent of Oscars in the horological world.

The Black Bay Bronze is a timepiece that captures all the elements that make a watch great. It features a simple but timeless design, coupled with a rustic and stunning bronze case, and matched with an in-house produced movement. Its retail price is rather attractive too, at S$ 5,800.

The Black Bay collection features several watches: the Red, the Black, the Blue, the Dark and a smaller 36mm version. However, we feel that the Bronze model stands out from the rest. The case material accentuates the classical vintage look. And it goes well even when worn to a beach party. 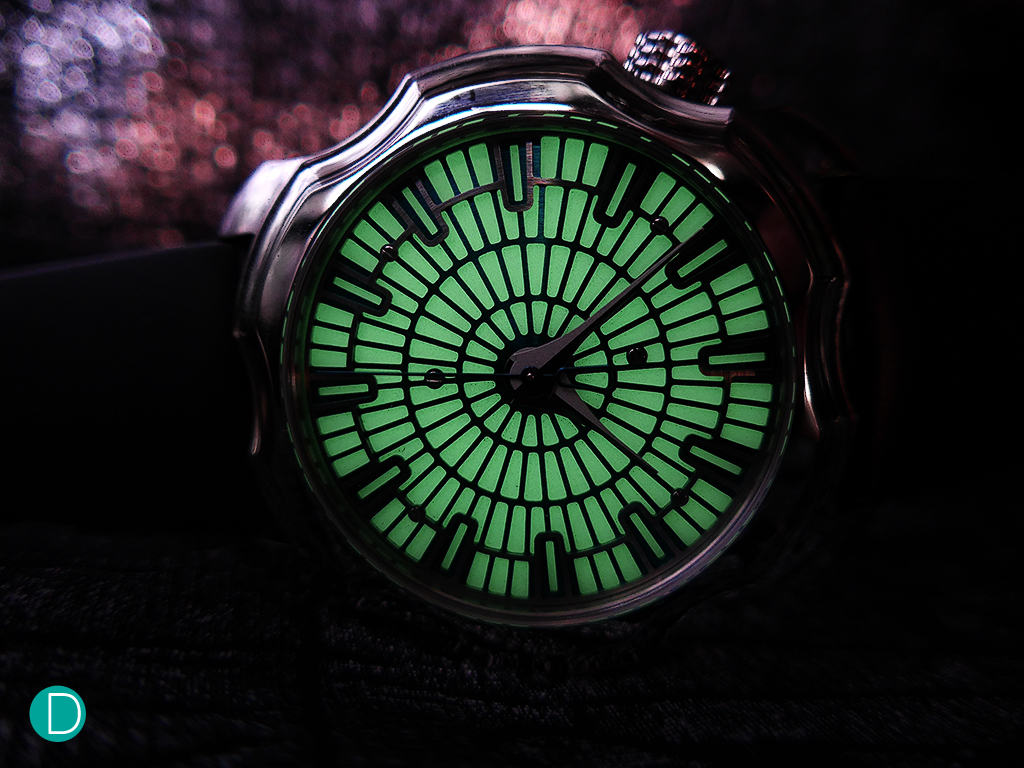 The bright lume of the Summer dial from Sarpaneva Korona K0 Seasons.

If you are seeking for a “cool” watch, we reckon the Sarpaneva Korona K0 Seasons might be the timepiece that you’d want to look.

When we first saw the K0 Seasons, we were impressed with its interesting aesthetics. Sure, it is not as elaborate as the Northern Lights, but the Seasons still stands out with its new “web” dial and the unusual case design. However, the magical moment begins in the dark. The watch comes to life with the layer of lume that is fitted beneath the dial, which gives the watch a different set of characteristics.  The lume is no longer a functional feature, but rather an aesthetical highlight that distinguishes itself from the rest of the crowd.

The K0 Seasons is a stunning timepiece, no doubts about that. It is probably the kind of watch that you would want to wear to a party as well – after all, it is definitely going to be a star…especially when glowing bright in the dim lighting. It is slightly pricey at € 10,000 (approximately S$15,100), but you are certainly going to steal the show with this watch. 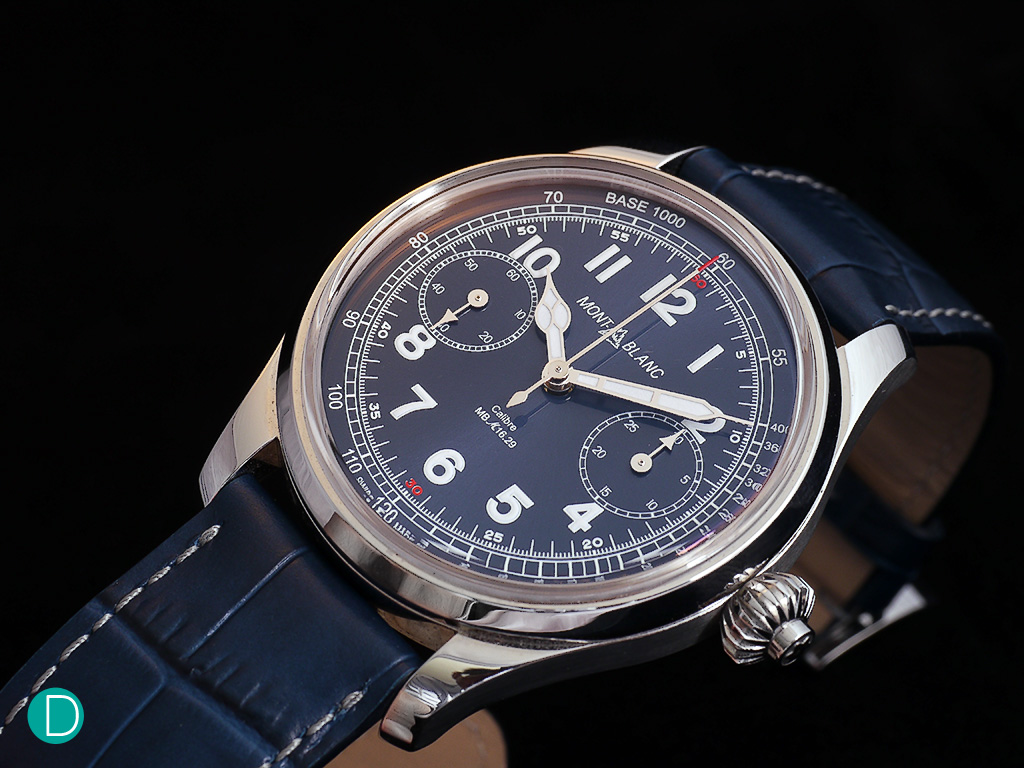 The Montblanc 1858 Chronograph Tachymeter. A fine timepiece, with an equally alluring blue dial.

Picture this situation – you require a slightly dressier timepiece to match with your tailored suit, but the usual options pretty much bore you. What are the alternatives do you have left?

Well, Montblanc might just be the answer to your call. In recent years, following the acquisition of Minerva, Montblanc had produced some rather stunning chronographs and chronometers. The 1858 Collection is an example. One of the first pieces in the collection – the 1858 Chronograph Tachymeter – is a finely designed monopusher chronograph, featuring an intense blue dial. The design, notably, is inspired by the pilots watches that Minerva had produced in the 1920s and 30s as well.

Coupled with a finely engineered and finished Calibre MB 16.29 movement, the 1858 Chronograph Tachymeter is a timepiece that performs as well as it looks. It retails at S$37,800, though as we understand it, the steel and gold versions are all spoken for. Perhaps the new Bronze version might appeal?

The Nautilus 5711/1P 40th Anniversary Edition. Definitely a watch for the big boys out there.

There are many great watches out there in the market, but there are few iconic watches that have stood the test of time. The Patek Philippe Nautilus, however, is one that have garnered a strong following. Some would say a cultish following.

It is actually difficult to believe that the Nautilus has been around for 40 years already. The watch, which is now available in different complications, still look timeless and relevant in today’s age. No doubt, the Nautilus have undergone several changes – most notably in terms of the movement. The time and date-only watch is now powered by Patek Philippe’s Calibre 324SC, and wonderfully finished to the Geneva Seal’s standards.

The latest model – which was produced to celebrate the Nautilus’ 40th Anniversary – is cased in Platinum and fitted with a special dial. It is baguette diamonds for its indices, and it is priced at S$149,300. In short, the Nautilus is indeed a special timepiece. But the 40th Anniversary, with a limited production of 700 pieces, is truly a notch above the rest. The Hautlence Vortex Primary by Eric Cantona. A watch that exudes some playfulness with its design and colour scheme.

Finally, we end it off with a bang. with the Hautlence Vortex Primary, designed by Eric Cantona.

Eric Cantona, as we all know, is a colourful figure on-and-off pitch. The whole watch perhaps mirrors the personality of the flamboyant Frenchman nicely. Featuring the signature Hautlence Vortex case, the watch is given an additional dimension with the use of coloured sapphire crystals that were fitted on the various panels around the watch. We thought that it complements the style of the watch nicely, considering that it utilizes a rather novel way of indicating the time. It does so by using the retrograde minutes, as well as a track system that indicates the hours. But the watch is a true spectacle with the bridge housing the escapement making one rotation every hour. This incidentally serves a secondary function as a tourbillon type mechanism too.

Priced at S$298,000, the black PVD titanium watch is limited to a mere 18 pieces. This is probably a timepiece that not everyone can pull off. But if you do have a personality that is as colourful as this watch, then perhaps the Vortex Primary might just be the timepiece that is meant for you.

When it comes to watches for parties and festive season celebrations, it is important to decide the dress code. This will help you to decide on the kind of clothes that you might want to wear, and hence helping you to see what kind of watches will go better with it.

In this week’s selections, we have looked at six different timepieces that we think are suitable for different occasions. For instance, the Montblanc and the Patek Philippe are meant for dressier events, while the bold and distinctive design for both Sarpaneva and Hautlence are more suited for casual parties. However, there are no hard and fast rules here. Ultimately, we feel that it is more important to wear something that you like and feel comfortable with.

So, what are your thoughts on our selections today? Also, what are some of the pieces that you will wear to a party, or a festive season celebration? Do let us know in the comments below.