What shape comes to mind when one thinks of a watch? Chances are the shape is round. Well, most watches fit that description, one brand even famously said that they only make round case, always have and always will. But today, we focus on the rectangular watch case.

Interestingly, one of the first wristwatches and which is widely accepted, the Cartier Santos-Dumont, did not have a round case. It was rectangular watch! So, why did watchmakers decide to use round cases for their mainstream watches? We can only offer some guesses. Perhaps its the philosophical connection to time being an endless loop, like the circle. Or perhaps it is just plain economics as round cases are more popular. We do not really know. But we do know that rectangular watches, though less popular can be very beautiful as well. And today we propose you take a look at six of them. The Cartier Tank LC Squelette. The skeletonized dial adds an interesting touch to this dressy timepiece.

We begin this article with a classic from Cartier: the Tank.

The Tank first debuted in Cartier’s repertoire at around 1918, and it was inspired by the new Renault Tank (a light tank made by Renault which saw action in World War I) that Louis Cartier had seen in 1917. Interestingly, the original Tank had followed the design of the Renault Tank closely, in particular, respecting the lines and proportions of the vehicle.

Over the years, Cartier had spawned a few variations of the Tank. Some of the more memorable ones include the Tank Asymétrique, the Basculante, as well as the LC Squelette that we have featured in the picture above. While these Tanks were obviously not inspired by the Renault Tanks, but its quirky interpretations definitely adds an interesting touch to this collection. As for the purists, we reckon that the Tank Louis Cartier or the Tank Solo is the way to go. Either way, you will be assured that you are owning an iconic timepiece. Following the Cartier Tank, we have the Jaeger LeCoultre Reverso. Similar to the Tank, the Reverso is an iconic rectangular timepiece that have had a long history, and remained timeless despite the relentless passage of time.

The Reverso was initially conceived as a sports watch, or more specifically, for polo. It happened when Cesar de Trey was travelling to India, and attended a polo game there. One of the players, a British Army Officer, had damaged his glass on the watch during the game and challenged Cesar to design a watch that is able to withstand the knocks and demands from the sport. This was the catalyst that inspired Cesar to produce the Reverso, as its reversible case is able to hide the watch face and hence protecting glass or crystal from damaging or shattering.

Just like the Tank, the Reverso had spawned many different variants in its long and glorious production run. These include the simpler ones like the Grand Reverso Ultra-Thin 1948, to the highly complicated ones such as the Gyrotourbillon 2 or the Grande Complication a Triptyque. There is something for everyone, and we feel the Reverso deserves a place in any serious watch collection. The stunning Goldpfeil Vianney Halter, on the wrist of the owner.

Next, we move towards the world of independent watchmaking. Independent watchmakers, for the longest time, have been creating unusual and controversial timepieces that have yield interesting results. Vianney Halter, for instance, is one of them. And his collaboration with Goldpfeil culminated with the Goldpfeil Vianney Halter timepiece, is something that we think is worth a double take.

The Goldpfeil Vianney Halter is an extremely conversational thought-provoking watch. We love how Vianney had toyed with the idea of including different shapes and incorporating them seamlessly into the watch, as well as using different types of finishing on the case. While it is seemingly strange on paper, but the end result is simply stunning. And the inclusion of a jump hour mechanism completes the magic.

The Goldpfeil Vianney Halter  very limited in production. Only 109 pieces were produced, and while they do appear every once in a while in auctions, getting one is getting to be more challenging as the years roll by. 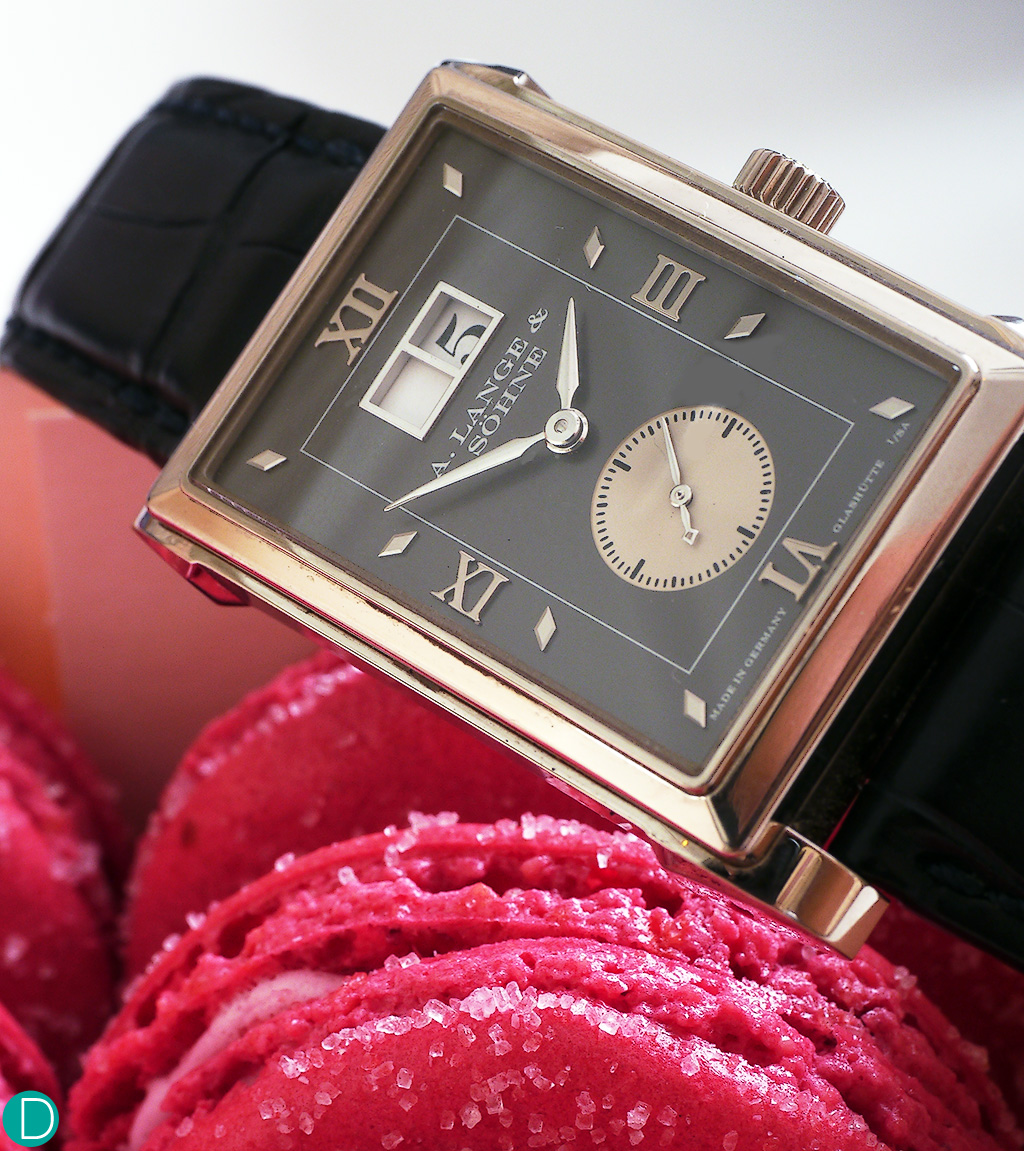 The A. Lange & Söhne Cabaret LOG Edition, with Laduree macarons.

The Cabaret was launched back in 1997, with a rather uncommon rectangular case. It was, unfortunately, discontinued together with the Arkade due to lower polularity. Its a pity, as the Cabaret, in our opinion, is a timepiece of exceptional beauty. We love its elegant and classy good looks, as well as its simple and legible design. The finishing is, as usual, impeccable. One noteworthy point is that  A. Lange & Söhne have specified a rectangular form movement instead of inserting an existing round movement. Kudos to them for that.

While it was pretty much ignored by many when it was still in production, we reckon that the Cabaret might appreciate in value as time goes by. This is thanks to its subtle and handsome looks, as well as its low circulation number. Well, we will definitely be keeping our eyes peeled on this one! We have yet another timepiece from an illustrious watchmaker that is often overshadowed by its siblings in the family: the Patek Philippe Gondolo.

Launched in 1993, the Gondolo was inspired by the Art Deco watches in the three decades prior to the Second World War. Notably, most of the watches in this collection feature a “stepped” rectangular case, similar to the Reference 5101 that we have pictured above. We thought that this particular watch case is rather intriguing, and it is both pleasing in terms of aesthetics and tactility. It also gives the watch some contemporary vibes, but without deviating from the Art Deco theme that Patek Philippe was inspired by.

The Gondolo, similar to the Cabaret, is a dark horse in the Patek Philippe collection. While the likes of Nautilus and Grand Complications may be what most of collectors are looking at, we reckon that the Gondolo offers something different from the usual crowd. We finally conclude this week’s article with something that we thought was rather special. It is an icon with an illustrious provenance that had its roots traced back to 1887. The timepiece is none other than Girard Perregaux’s Vintage 1945 Tourbillon with Three Golden Bridges.

This timepiece, as mentioned, features a few design cues that Girard Perregaux is famous for. This includes the instantly recognizable “Three Golden Bridges”, as well as the curved rectangular case that is found in the Vintage 1945 collection. The entire movement is built within these three bridges, which are designed to form double headed arrows, and arranged these bridges in parallel. This aligns the barrel, gear train and tourbillon along the same axis. The finishing is superb. The entire watch is a wonderful sight to behold. A magnificent work of art.

We have finally concluded with this week’s Throwback Sunday’s article, featuring the more uncommon rectangular watches. We actually had a bit of difficulty selecting these six timepieces, as we do not have as many rectangular watches in our archives as we first thought.

Nevertheless, we think these six watches that we have selected today represent the theme rather nicely. These are all excellent timepieces, and they look rather timeless and classy. These watches are crafted and finished beautifully. Honestly, you would not go wrong with either one of the six watches that we have selected today, if you are looking to add a rectangular watch into your collection.

Anyways, we hope that you have enjoyed this week’s installment of Throwback Sundays! Do share with us what are some of your favorite rectangular watches, as well as what kind of topics do you want us to cover in the subsequent Throwback Sundays article. Till next week, ciao!