Hmm, does the word “Darth” rings a bell? We are pretty sure it does, especially if you are a major fan of Star Wars. But what has it got to do with watches?

Well, we actually came across this term in the horological world a while back. As some of you might know, Seiko collectors are fond of giving nicknames to their watches. These include pieces such as the Tuna, Snowflake, and the Monster. Interesting, Seiko had also produced this particular black Seiko Tuna which was, unsurprisingly, called the Darth Tuna. And that the inspiration behind this article.

While there are several interpretations as to what constitutes a “Darth” watch, but we reckon any watches that is fitted with a black case would fit the bill nicely. This means that the watch can either be cased in carbon, finished with a PVD-coating, or anything else that one can think of, as long as the watch case (and preferably, the dial) is black in color.

So well, without any further ado, let us move on towards the “dark side” of the horological world… The Romain Jerome Spacecraft- Batman, on the wrist.

We begin the article with something that is a little political incorrect: the Romain Jerome Spacecraft- Batman.

Yes, we know. It is a little sacrilegious to bring in Batman into the picture, especially when one is using a term from the Star Wars franchise. These two entities shouldn’t have been mentioned in the same breath. But hear us out. First, its titanium case is treated with black-PVD that gives it a stealthy and ominous appearance, which fits the criteria of being a Darth watch nicely. Next, it features a futuristic linear retrograde hour display that looks rather spectacular. And lastly, it features an intriguing and contemporary case design that seemed as though it came out of a Sci-fi film. When these details add up together, it really makes the Romain Jerome Spacecraft- Batman a really cool and conversational Darth watch.

Oh, and we can certainly picture Darth Vader wearing this watch, in which we thought that it complements his armor aptly. Just don’t tell him that there are Batman emblems that are being featured around the watch! 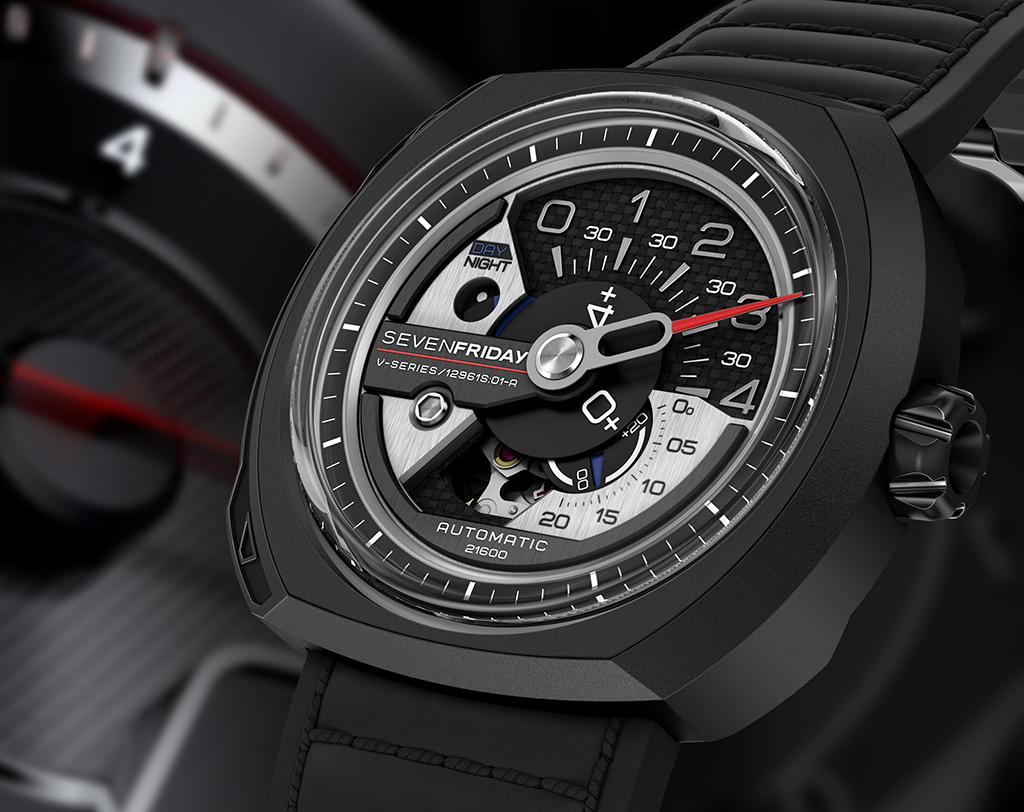 We have been fans of SEVENFRIDAY for quite some time, as we were highly impressed on its interesting and yet affordable take on horology. Hence, we were rather excited when they announced that they will be launching a new series of timepieces, dubbed the V-Series.

The V-Series features a rather atypical way of telling time, which we have covered in our review article previously. It brings back what Mr Daniel Niederer (the founder of SEVENFRIDAY) called “visual complication”, in which he aims to make looks more visually complicated without the use of mechanical complications like the tourbillon or the chronograph. While it may be confusing for some, but it definitely makes the watch much more unique.

Similarly, the SEVENFRIDAY V-Series comes with a variant that features a black PVD case. It is known as the V3, and it is the latest addition to the V-Series collection. The addition of the black PVD treatment on the watch case, as well as its interesting time-telling capabilities, certainly makes the V3 a highly desirable watch among the younger collectors. And at below two grand, we reckon that this Darth watch is going to be a hit with many young and aspiring collectors who wishes to opt for something beyond the usual offerings. The Sinn U1-D, made specially to celebrate the 35th Anniversary of The Hour Glass.

We then turn our attention to Germany, where there are synonymous with excellent engineering and attention to quality and detailing. And the Sinn U1-D is a great example of what the Germans stand for.

The Sinn U1-D is a limited edition timepiece made in collaboration with The Hour Glass, and it the epitome of what a solid dive watch should be. The watch, as usual, features a case that is made from submarine steel and is water-resistance up to 1000m. The steel is extremely robust, and it is said to be six times stronger than the conventional kind of steel that is used for watchmaking. On top of that, the watch is further strengthened with a Black Hard Coating using TEGIMENT® Technology. This not only gives the watch an imposing appearance, but it makes the watch much more solid as well.

We are big fans of Sinn watches, and the U1-D is definitely a watch that performs as well as it looks. Not only is it reliable, but we feel that it is also priced rather reasonably as well. This is probably the Darth watch to go for if one is looking for something that offers a wonderful value proposition. When we first saw the Urwerk UR-106 Lotus, we were amazed with its striking aesthetics. No doubt, the watch features its signature satellite revolving complication, but there were a few other details that make this watch much more stunning than usual.

One of the main highlight of this particular Urwerk, we reckon, would be its case design. While we are not big fans of diamond encrusted watches, but we think that this one is done rather tastefully. We love how Urwerk had incorporated black diamonds into the black PVC-treated titanium timepiece seamlessly, without making it too ostentatious or sticking out like a sore thumb. The choice of using black diamond is simply perfect. We also feel that the inclusion of the diamond makes the watch looks much more exotic and enigmatic as well.

Just like the Romain Jerome Spacecraft, we think that the Urwerk UR-106 Lotus may be something that Darth Vader might wear. It looks uber-cool, and it gives off this rather bad-ass vibe. Now, who says that this watch is designed for the females only? We continue our article with yet another endearing and inspiring independent watchmaker: Maximilian Büsser & Friends, or MB&F for short.

The Horological Machine (HM) collection has been a mainstay in the MB&F repertoire for quite some time, and we have seen many wonderful creations from this collection over the years. One of them would be the HM3, and we reckon that it is possibly one of the most defining and iconic timepieces in the family. It is actually not that difficult to see why. The HM3 features a rather bold and aggressive design, with an unusual way of telling time. Oh, and for this particular Final Edition, the time indicators features the Super-LumiNova coating while allows the numerals to glow brightly in the dark. This makes the black PVD-treated 18k gold watch tremendously stylish, and a whole lot more desirable than ever before. The latest iteration of the Greubel Forsey GMT, in black titanium. Both the dial and case is treated with ADLC which blackens the titanium, but also hardens it.

Saving the best for the last, we shall finally end our selections with arguably one of the most desirable Darth watches from one of the industry’s top watchmaking duo. Introducing the stupendous Greubel Forsey GMT, in black titanium.

The Greubel Forsey GMT, in our opinion, is possibly one of the best watches that money can buy. Its attention to detail, as well as its finishing, is probably one of the best in the world. We like how the watchmaker actually makes sure that ever tiny little bit is being taken care of, no matter whether it is visible to the user or not. On top of that, we also feel that the watch is rather appealing visually. This is thanks to the great depth and beautiful details that is present on both the dial and the back of the timepiece, as well as the excellent finishing that we have mentioned in the same paragraph just now.

While the variant in black titanium might not be everyone’s cup of tea, but we think that it gives the GMT a different sort of characteristic altogether. The ADLC (amorphous diamond-like carbon) not only gives the watch a deep black coating, but it also makes the watch case much more robust and harder. Notably, the main plates and bridges are also black finish, and this gives the watch a rather mystical and stealthy appearance. Well, would Darth Vader approve of this watch? We will certainly like to think so.

We have finally come to end of this article, and we certainly hope that you have enjoyed this week’s installment of Throwback Sundays.

The inspiration behind this week’s article is actually from the upcoming Star Wars movie, as well as the Seiko fanboys who have affectionately nicknamed a black Seiko Prospex as the “Darth Tuna”. Hence, we feel that it would be interesting to coin the term “Darth Watches” for timepieces that features a black case.

Before we go, please share with us what are some of the “Darth Watches” that you have in your collection, and do a great week ahead! Till then, ciao!