We must admit, it was only rather recent that we became fascinated by quartz watches. After being snobs and turning our noses up, regarding quartz as the pariah of the industry, we have come to accept them for what they are, and the value they provide. Here are our recommendations for 6 to consider, from Citizen, Grand Seiko, Longines, Luminox, Casio and Breitling.

The rise of the quartz movement

A common complaint from serious collectors is that quartz watches have no soul. I used to subscribe to this philosophy as well, but in recent years, I have started to question this assumption. Like most apologetic missions, it started out to prove the opposite – that quartz watches indeed have no soul. So I began a study to answer the question: What is the soul of a watch? How to define it? How to recognize it? How to tell if a watch has one? After two decades or so of searching, and straining to discover, I found no answer. And in the search, I came across many features of quartz watches which are appealing. Here are the top two:

First among the appeals is the convenience of the quartz watch. Just put it on and go. No winding, no fumbling to set the time and date. Just set once and forget. Particularly so if the movement is equipped with a perpetual calendar (many do), and especially so if it is high precision (the best usually are). Generally for a mechanical watch, gaining 4s and/or losing 6s a day is considered to be good, and can be considered chronometer certified, passing COSC requirements. And for quartz, COSC requires a more strict accuracy of 0.07s a day. In practice, a watch which gains or loses 4s a day will need an adjustment perhaps once a week (over the week it will gain/lose almost half a minute). Or at least, if one is not as anal, it may be 2 weeks before an adjustment is due. But to gain/lose the same half a minute, the COSC quartz watch will take 428 days. Convenience.

Secondly, some complain that quartz watches are not finished well. While this is true with the inexpensive watches, many quartz watches are finished quite nicely. For example, quartz movements made by Patek Philippe are finished to good engineering standards. And those by Grand Seiko and Citizen may be finished to the same levels as their mechanical counterparts, and designed to be serviced and not replaced during when the watch is returned for service. Even case finishing in these watches are exemplary, and beyond criticism. And this is not only a recent phenomena, nor limited to obsessive Japanese brands. The Rolex Oysterquartz of the 1970s feature engineering and finishing equal to those of the mechanical Rolexes of the day.

So it is with this that we explore quartz watches and recommend six. The first three fall into the category of ultra precision, offering an accuracy of at least +/-10s a year, making the hypothetical need to make an adjustment, when the watch gains or loses half a minute, extend to 6 years. And for two watches in our recommendation which are rated to 5s a year, only one adjustment is needed every 12 years. The next two perhaps fall into the tool watch category, being touted to be indestructible. And the final one is selected to round up and represent the smart watch universe, which by definition is based on a quartz movement. Well, let us begin.

Note, the title of each watch recommended opens up to our full article on the timepiece. Please do click and read the detailed reviews.

We begin with what we think is perhaps the most advanced quartz watch in production today. The Citizen Chronomaster is rated to and accuracy of 5s a year, magnificent finished with zaratsu polishing on the case, and a traditional hand made Japanese paper dial. The movement features a perpetual calendar, and is light powered, so does not need a battery change every few years.

The watch is hand assembled by a single artisan, which they call a Super Meister. Citizen is so confident of the watch that it offers a 10 year warranty with free servicing. This is perhaps one of the highest we have come across. Rolex is already remarkable to offer 5 years warranty for all their watches, but 10 is next level.

The Eco-Drive movement is powered by light through photo voltaic sensors below the dial. The watch has many special features, and we recommend you read the detailed hands-on review for more information. The fit and finishing of the case, dial, hands, bracelet and movement are worthy of haute horlogerie. And yet it is proposed at a price of ¥ 330,000 (approximately US$ 3,000 or S$ 4,000.) Currently Citizen only offers this model in Japan.

We note also this Baselworld that Citizen has shown a working prototype of the A0100 movement, with a rated precision variance of 1s a year. The prototype is working and housed in a sapphire glass pocket watch case. And we look forward to Citizen announcing wrist watches in 2019 with this new ground breaking movement.

Close on the heels is another Japanese entrant. Also being offered at a similar price of ¥ 340,000 (In Singapore the retail is somewhat higher than in Japan. With GST, the price is S$4.400). Though the SBGX069 is rated to 10s a year, it rather makes up for the finishing of the movement. We judge the case and hands of the SBGX069 to be similar to The Citizen, but the movement is finished to perhaps a higher haute horlogerie standard. The design of the movement is also interesting in that the electronics are built within a hermatically sealed cabin. Seiko’s recommendation is a 50 year service interval. The battery resides outside the cabin, allowing it to be changed without exposing the electronics.

Seiko offers a 5s a year rated movement as well, but reserves that for limited editions. An example is the new Grand Seiko GMT SBGN001 25th Anniversary Limited Edition.

The Grand Seiko 9F movement does not feature a perpetual calendar, it will need a date adjustment once every two months.

The Swiss are not far behind. Longines have a history of very high precision quartz watches. The Longines V.H.P. is rated to 5s a year, and features a perpetual calendar. More complicated V.H.P. models will be released this year, so keep tuned for this. We have seen and photographed them, but unable to share with you yet, as Longines have placed the information under embargo until they are ready to release it. Watch this space! Priced at only S$ 1.500, the Longines Conquest V.H.P. handily beats the Japanese offerings in terms of pricing. But Longines chooses to attain this price level with high automation in its production, and also in the more modest level of finishing lavished on the watch. The fit and finish of the dial, hands, case, bracelet is a very good engineering level, but not comparable to the high levels offered by Citizen and Grand Seiko. However, it is the value winner in the high precision watch stakes.

For the first of the “indestructibles”, we have the Luminox Navy Seal in Carbon. The Series 3500 is the selected watch for operations by the US Navy SEAL teams.

The case is in carbon and Luminox says that it is selected because it is tough and hardy. Apparently the SEALs agree. The watch is very light, and features Luminox Light Technology, using tritium tubes to keep the legibility high under dark conditions. The battery only requires a change once every 7 years to maximise usage and reliability in the field.

Next we have the king of the indestructible. Casio G-Shock. Out of the hundreds, perhaps thousands of G-Shock models we could have selected, notwithstanding even the very high end versions like the MR-G 2000HA , we choose the Full Metal GMW-B5000D. 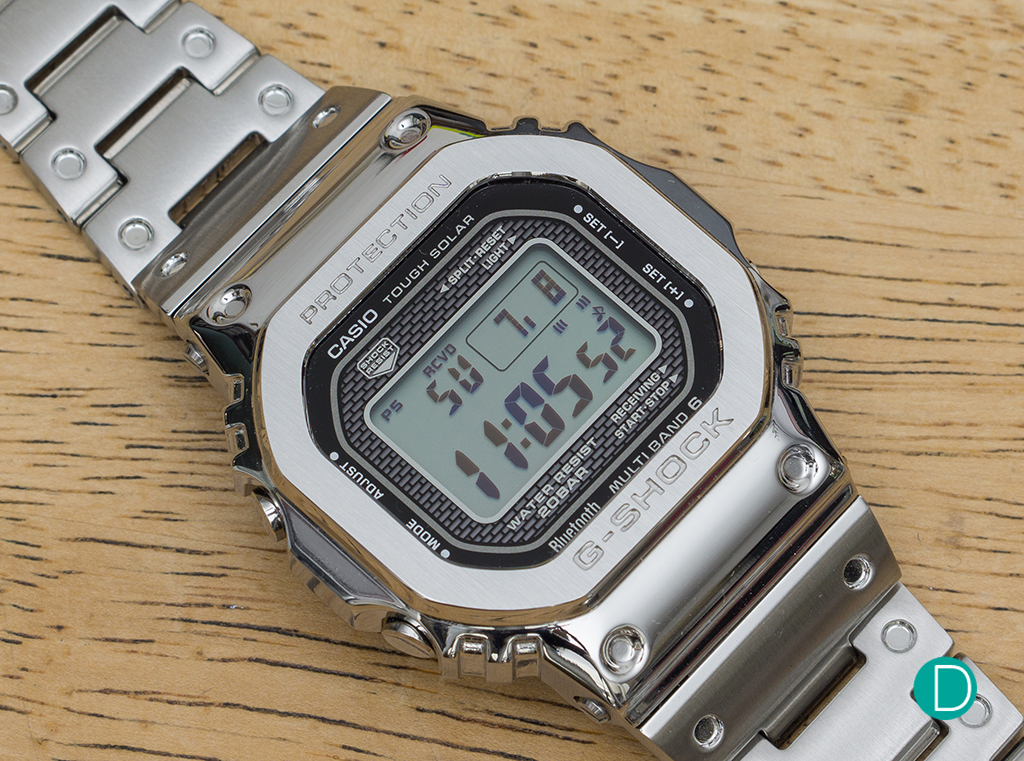 The Full Metal is created in stainless steel, and in the design which is faithful to the original plastic case. The metal case and bracelet gives it a good heft and feel, and the watch feels luxurious on the wrist. The GMW-B5000D is also been updated with the latest Casio electronics, and able to communicate with smart phones by Bluetooth, and is also equipped with a multi band receiver, syncing with radio signals. The movement is also light powered, and does not require a battery change.

At S$ 799, it is rather good value, especially as it is a fully featured quartz movement (in addition to the ultra ruggedness, the connectivity, the movement is also equipped with a world time, alarm, stopwatch and timer.

Perhaps the odd one out in terms of price level is the Breitling. At S$11,950, it is the most expensive watch in our list today. But it is also the smartest.

For starters, it features a high precision movement, certified to 10s maximum deviation per annum. Secondly, it carries smart connectivity that not only allows the watch to receive alerts and display information from the smart phone, but the B55 exchanges information with the smart device enabling sharing of data bidirectionally. It capitalizes on the strengths of the watch and smart device where matters. The dial layout intelligently laid out: clarity, legibility being the order of the day.

In addition the B55 is a fully featured pilot watch, with dual display of time in both analog and digital formats. It has all the usual and special features required for flying an aircraft. Read our full review for a run down of all the features. The battery is rechargeable, and each full charge is able to last 2 months.