We previously did a feature on Members of Royal Families with interesting timepieces.  For this weeks Spot the Watch, the person we are featuring is the Sultan of Brunei.  The Sultan is known for his vast car collection,  bespoke suits and shoes and wristwatches.

As the Sultan is usually photographed in his suits, it can be difficult to spot him with watches on his wrist.  Luckily after some thorough searching we found him wearing few interesting pieces.

Three out of the four watches we have spotted on his wrist are from Richard Mille.

The first watch we have spotted on the Sultan’s wrist is from Richard Mille and is a lightweight timepiece. It weighs only 19 grams on its original strap.  The watch is question is the Richard Mille RM 27-01 Tourbillon, developed for Spanish tennis player Rafael Nadal.   The RM 27 series of watches has received worldwide media coverage for its technical properties as well as the price tag for purchasing one.

We first saw a picture of the Sultan with the distinctive Richard Mille case shape  under his shirt cuff but it was too small for us to make a confirmation.  More digging was required and we found a larger image, which allowed us to zoom in to take a closer look.  We couldn’t see the face of the watch but it was evident the case was matte finished and certainly not stainless steel or titanium.  The other noticeable detail was the red rubber crown.   We are pretty certain the Sultan swapped the original Velcro strap for a more durable grey rubber strap.   The watch certainly has the uber cool factor! Richard Mille RM 27-01 Tourbillon on the wrist of the Sultan of Brunei.  Picture (C) G20 Russia

The second Richard Mille we have spotted on his wrist is the RM 33 Extra Flat Automatic.  This Richard Mille is a dressier timepiece and as the name suggests it is very thin. It utilises a micro rotor to keep the thickness of the watch slimmer.  This makes it a better pairing for a business suit since it would easily fit under the barrel or french cuff of a shirt.  The round case makes it stand out from the tonneau shaped RMs. The final Richard Mille spotted on the wrist of the Sultan is one that you will certainly not see everyday.  If you are extremely lucky you may see one on someones wrist.  The Sultan of Brunei is one of 5 people to own the RM 56-01 Sapphire Crystal Tourbillon.  Usually sapphire crystal is used on the front and the back of a watch.  Not the entire case and parts of the movement.  Richard Mille utilised sapphire crystal for the entire watch case, the baseplate and some of the bridges for the movement.  Now we are not sure if you would classify the watch as a sports or dress watch.  The Sultan has worn it with his usual business suit  and in more formal military attire.  With either outfit the watch certainly stands out. The final watch spotted on the Sultan of Brunei is a Luminox. Luminox is known for producing watches with quartz movements and using tritium gas tubes for illumination of the dial.  They have made models for different organisations of the United States Military including the U.S Navy Seals.  The Sultan of Brunei is pictured below in military fatigues wearing what appears to be a Luminox Navy Seals model in black and yellow.  The colourful accents of the markers on the bezel and dial provide a contrast to the black case and bracelet. 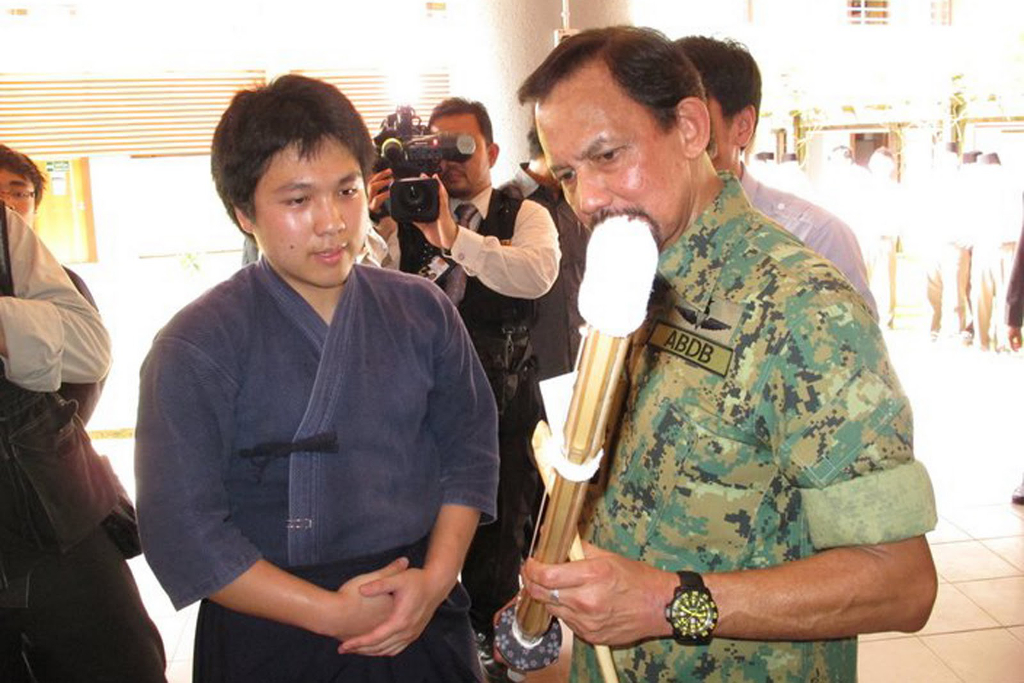 The Luminox Navy Seals on the wrist of the Sultan of Brunei. Picture (C) UBD KENDO CLUB