In the collectors’ world, there are always special pieces forgotten. Occasionally, one resurface at some point. These pieces are turning the world upside down, kindle desires, stir up devout passions and, at the end, make one collector truly happy. This is the case of the unique and special A. Lange & Söhne Reference 17689. This is an ultra-rare combination of a central minutes and seconds chronograph and minute repeater.  We were lucky to hear and talk about it with its owner. We sat for a coffee and lemonade and chatted over this magnificent piece.

A history with ups and downs

Our story begins in July, when Suzanne Bäumler contacted our Editorial Director and Lange expert Peter Chong. Her story about a Lange pocket watch kept in her family for generations grabbed our attention. We decided to arrange a tête-à-tête interview to find out more about it. We met in Munich, Germany in one of the lovely places on Maximilianstrasse, a street known for its galleries and designers’ shops. The perfect spot to talk about a special timepiece. A. Lange und Söhne 17689 is a spectacular looking watch. Hidden inside are a minute repeater and a chronograph with central seconds and minutes

It is known from the A. Lange & Söhne archive that a pocket watch, the reference 17689, was commissioned by Max Ernesti. The watch was delivered on December 13th , 1884 and the sum of 2,500 Deutsche Marks, a very large amount for the time. Unfortunately, there is not a lot of information about the original owner of the Lange piece. The only available information about him is that he was a bureaucrat and he was 34 years old at the moment of the watch’s acquisition. A certificate of the Deutsche Uhren Museum Glashütte (German Watch Museum) released in June 2015 make an attestation of the originality for the pocket watch numbered 17689. The certificate describes the watch as a minute repeater with double chronograph, sold on 13th of December 1984 for the sum of DM2,500. This fact was confirmed partially by the Martin Huber’s book, “Die Lange Liste” – page 214, where we find the pocket watch 17689 as RG Qualitat Fu (internal nomenclature for the screwed gold chatons), sold in 1884 for a price of DM1,465. In the book, Mr Huber also states the watch as a minute repetition “mit doppelcchronograph” – double chronograph pocket watch. Looking at the photographed calibre, we tend to believe that is actually a minute repeater with simple chronograph but with central chronograph minutes.

We have information about the next owner of the Ref. 17689, respectively Mrs Bäumler’s great-grandfather, Stephan Heimann. Born in 1870, Herr Heimann was a rebel of his time. With an adventurous spirit, he was a world traveller, a luxury amateur but, at the same time a skilled entrepreneur and a great inventor.

The 1894’s residence papers place the 23 years old Mr Heimann in Chicago, where he spent two of his youth years. In 1895 he returned to Munich, only to leave again, 3 years later, for Qingdao, China. A talented businessman, Stephan Heimann opened a mineral water factory and a saloon with entertainment hall. Together with his brother, he was the owner of a German Biergarten with a locally produced beer. In 1903, Stephan Heimann sold everything and the brewery became what is known today as the Tsingtao Brewery. The beer factory was officially started by an Anglo-German joint stock company based in Hong Kong, at August 15th, 1903.

Mr Heimann returned to Germany in 1903 and started to be involved in the Munich scene. In 1914/1915, he invented and started to produce the Feldflaschen – the aluminium water containers used in military applications.

1914 was the acquisition year of the Lange pocket watch. (redaction’s note: there is no other information about what happened with the watch between 1884 and 1914). Mr Heimann was very proud about his watch. Being interested in cars and luxury clothes, he was seen wearing it very often.

The life story of Stephan Heimann continues with the development and patents for waterproofing textiles and artificial leather. Until his death in 1958, Stephan Heimann loved his watch, wearing it with every possible occasion.

The reference 17689 remained in the family ownership. One of his two daughters, Suzanne Bäumler’s grandmother married a goldsmith, who adopted the Lange pocket watch. He took care of it until his death. The watch was always available in the house. Mrs Bäumler remembers how her grandfather showed her the watch, from time to time, and activated the striking mechanism. As a child, she was fascinated by the watch itself and with the idea of a watch telling the time. Her grandmother was not always happy to see the young girl playing with it. Years passed, and the watch started to stay longer and longer in the office desk’s drawer. In the family, it was only “the grandfather’s watch”, just part of the family.

Only years later, Mrs Bäumler rediscovered the Lange watch sitting undisturbed and decided to give it a proper and deserved maintenance. She brought the watch in Munich’s Lange boutique, where the employees could not believe their eyes. The watch was then sent to the A. Lange & Söhne in Glashütte, where it was authenticated on 11th of June 2015. Airing the watch after so many years was a nice surprise for the Lange watchmakers and everyone was happy to encounter this marvellous piece of Glashütte horological history. The watch was generally overhauled and has been restored to its former glory by the renowned watchmaker Mr Jan Sliva, Lange’s head of restoration. Mr Sliva took more than a year to complete the work. All of the Reference 17689’s pictures presented in the article are credited to him. The restoration was done for a modest sum of €12,000.

At this moment, the A. Lange & Söhne is kept in the Glashütte Watch Museum, in Germany.

Getting to know the Lange Reference 17689

Reference 17689 has a marvellous 18-karat red-gold Louis the Fifteen style case. The Graff-Gehäuse, as it is named in the country of origin, Germany, has the same characteristics as another historical piece – the Reference 42500. The last one is the most important pocket watch ever built by Lange and inspired the modern Grande Complication, launched at SIHH 2013. But if the Reference 42500 is a technical achievement, our focused pocket watch has a more poetic story and personal touch. The beautiful enamel painting is well preserved. The allegoric motif of spring is unusual for those time, being realised at the wish of the commissioner.

The case has a fine lace engraving with beautiful enamel work on top and also on the bottom. The enamel is a personalisation realised for the commissioner, Mr Ernesti. The front enamel painting is an interpretation of the Spring, as a symbol of youth and happiness. On the back side, there is a monogram formed by the name’s initials M and E. The enamel work is elaborate and well kept. In that era, there were only two places in which such work could be produced: in Genf, Switzerland (Geneva) or at the Drawing Academy in Hanau. Since there are no customs’ hallmarks, the enamel painting is highly probable to be realised in Hanau. This small detail denotes that also the case was realised in Glashütte. This increases, even more, the pure German originality of the watch. The pocket watch is decorated with enamel work also on the back. The monogram represents the owner’s name initials. The beautiful lace decoration is present all over the case

The watch’s dial, at a first glance, looks very neutral and common. But the white enamel dial with tall Roman numerals hides a central hands chronograph. The time display hands and the minutes and seconds’ hands of the chronograph are placed centrally. This is a rare and beautiful complication. There is no real technical reason behind this topology, but it helped to make the dial visually clean with good legibility. The most appropriate modern interpretation can perhaps be attributed to the AgenGraphe, present in the Fabergé Visionnaire Chronograph and the Singer Reimagined. The blue hands are completed by a small second’s sub-dial, present at 6 o’clock. The chronograph’s scale uses the outer register. The design offers excellent legibility, the readout is easy and precise.

The dial is simple, yet practical and well legible. The upper side holds the brand’s name and workshop location: Glashütte bei Dresden. The reference number is painted in red. Detail of the central axis. There is visible the design layout and the beautiful finishes

The appearance is spectacular. Due to the fact that the watch was well preserved and damages through the passage of time is mostly minor. The movement offers an equal joy as the case.

The movement has an interesting construction, visible in the pictures realised during the restoration. Other visible details are the minimum reconstruction needed to regain the correct and full functionality. As always, Mr Jan Sliva did an excellent work.

The watch can be seen at the Deutsches Uhren Museum Glashütte (Glashütte German Watch Museum) at the end of this year. From our discussion with Dr. Suzanne Bäumler, the watch is not officially for sale but she is open to discussion. View of the 17689’s movement. The finishes are warm and charming. The balance cock is decorated with a beautiful engraving. Lange’s signature diamond is present but the swan-neck regulator is not present. Other decorations visible are the chamfering of the chronograph levers and bridge engravings. This photograph is of the watch before restoration. The print present on the dial can be found as gold filled engraving on the movement. A fine brushing transpires on the bridge along with the lovely brushing of the ratchet wheel. Chronographs components are a symphony of shapes and finishes. The anglage can be found even on the chronograph wheels’ arms. The pieces are in excellent shape. Between the wheels are clearly visible the gold chatons in which the jewels are mounted. In the picture are clearly visible the repeater’s wheels and cams: the lowest one with 12 steps for the hours and the four corners star for each hour quarter, and 15 steps for the each of the fifteen minutes of a quarter. 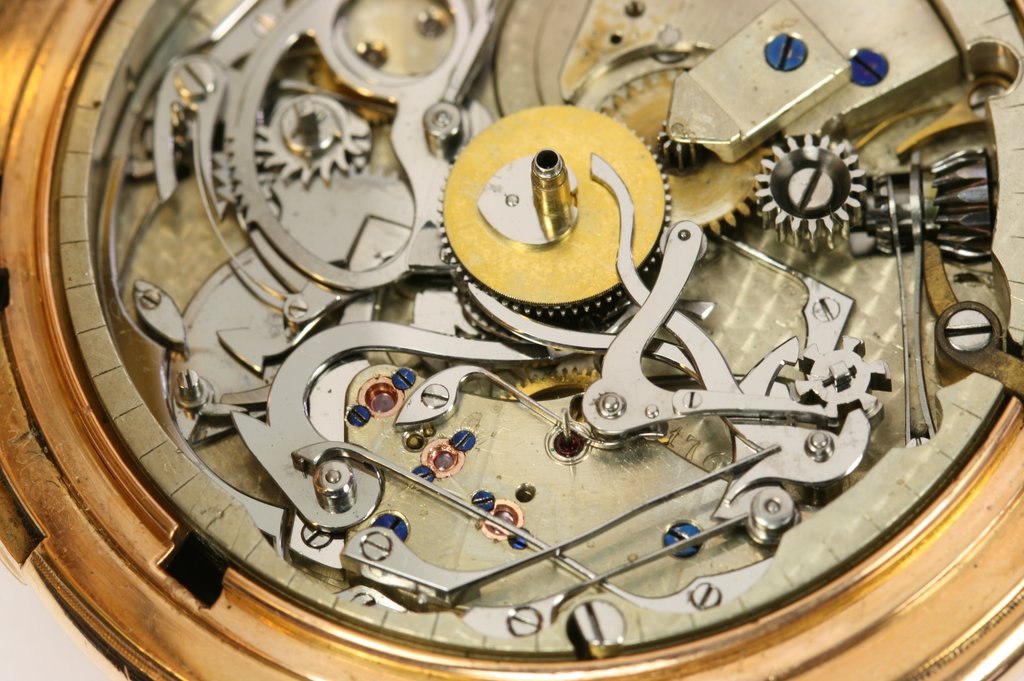 After dismantling, the gold chatons shows tear marks and damage Detail of one of the damaged gold chatons The bridge has even the hidden side decorated with an impeccably executed perlage. The bridge mounted after cleanup, gold chatons and blued screws replacement. To be noted the fine, almost imperceptible perlage of the main plate. Lange’s main-plate with visible striking mechanism. Interesting the choice of multi types of finishes for different areas of the plate A. Lange und Söhne Reference 17689 after one year of work. The result is breathtaking. The cleaning reveal even more the fine execution’s details