The deep sea. Mysterious. Little is known about its secrets. The deepest parts of the Earth’s oceans is the Mariana Trench in the Pacific Ocean. The trench is about 2,550 kilometres long with an average width of 69 kilometres. It reaches a maximum-known depth of 10,994 m (± 40 m) or 36,070 ± 131 ft at a small slot-shaped valley in its floor known as the Challenger Deep, at its southern end. That is the destination. And one watch brand has sent a watch, strapped to the outside of a submarine down to that depth. Twice. First in 1960 with the Deep Sea Special, and again in 2012 with the Deep Sea Challenge. Both times, the watches returned fully functional. This is the story of both Rolex watches which made the journey. In Part 1, we explore the Rolex Deep Sea Special, the first watch ever to dive to the depths of the bottom of Challenger Deep. And in Part 2 next week, we uncover the secrets of the Rolex Deep Sea Challenger. 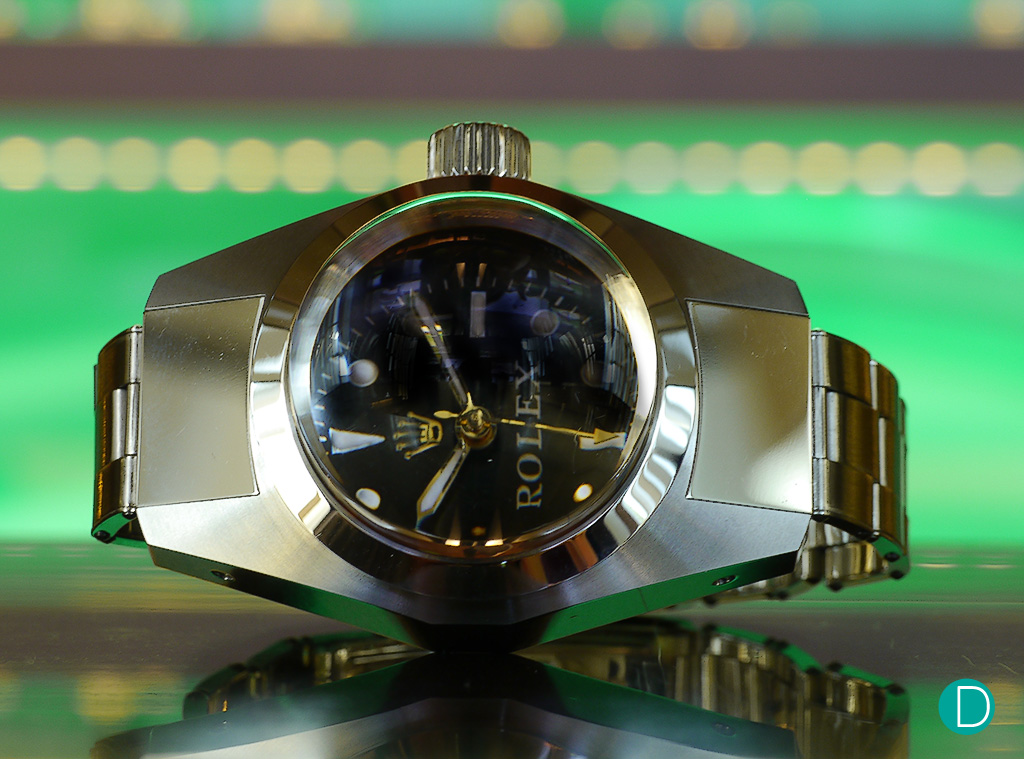 Rolex Deep Sea Special No. 47 which is a Rolex Display Model.The crystal is very high domed and curved. The reason being that a sphere is the strongest structure known to man. But the high crystal means that it is exceedingly difficult to photograph
Ideally, we would shoot it in a controlled studio, move the lighting around while keeping the camera and watch totally stationary, and then using Photoshop to merge the images. But this photograph was taken in-situ as a single photograph at the bar of the new Rolex Boutique in Marina Square.

The dive was on board the manned submarine Trieste, which descended to the ocean floor of the trench. Attached to the outside of the Trieste was a Rolex Deep Sea Special. A graphic showing the depths that the Trieste had to descend to, and a glimpse of what the Mariana Trench looks like.

The vessel was designed by Swiss scientist Auguste Piccard and built in Italy. Trieste was launched on 26 August 1953 into the Mediterranean Sea near the Isle of Capri. The design was based on previous experience with the Piccard designed bathyscaphe FNRS-2. Trieste initially was operated by the French Navy.  In November 30, 1953, it performed a landmark dive off the coast of Ponza Island. Rolex was already collaborating with Piccard then, and had supplied a Deep Sea Special which was designed to be carried attached to the outside of the submarine during the dive. This dive of 1953 broke the then world record by descending to a depth of 3,150 m. Rolex’s intention at that time was to test the concepts in their design for a water proof watch. When the Trieste surfaced after the dive, the Rolex Deep Sea Special was running normally.

After several years of operation in the Mediterranean Sea, the Trieste was purchased by the United States Navy in 1958 for US$ 250,000. The US Navy, collaborating again with Rolex made the monumental dive into the bottom of Challenger Deep on January 23, 1960, with Jacques Piccard (who co-designed the submersible along with his father, Auguste Piccard) and USN Lieutenant Don Walsh. A scale model of the Bathyscape Trieste on display at the Rolex Boutique in Marina Square.

Their descent took almost five hours and the two men spent barely twenty minutes on the ocean floor before undertaking the three-hour-and-fifteen-minute ascent. The measured depth at the bottom was measured with a manometer at 10,916 m (35,814 ft) ±5. The Trieste was not equipped to take photographs during the dive.

The watch which accompanied the dive, strapped to the outside of the Trieste is the Rolex Deep Sea Special No. 3. This watch is currently in the collection of the Smithsonian Museum in Washington DC.

From our research, we gather that at least 7 prototypes (perhaps a max of 9) were known to exist from that period. The early versions had a low glass over the dial, and the later versions had a high glass.

Comparison of the glass on the two versions of the Deep Sea Special. Picture from Rolex Passion Report.

2 – The white dialed Deep Sea Special with number 03 ( from Smithsonian Museum, Washington DC ) presented by Rolex Geneva and the actual Deep Sea Special that went down with Piccard & Walsh in 1960. This is a high glass version in a steel case with gold mid-links on the bracelet. Photographs of the watch, taken by the Smithsonian can be seen at this page on the Rolex Passion Report.

From comparing photographs of No. 1 and No. 2 with No. 3 and No. 5, we found that the first two had a lower glass than the latter two, and agree with Philipp Stahl at Rolex Passion Report that these were made for an earlier test expedition in 1953 where the watch was tested to a depth of 3,150 m. No. 3 and No. 5 and later series were redesigned from what Rolex learnt from the 1953 dive and features a very high plexiglass. Philipp also has confirmation from the Smithsonian that it was No. 3 that was the watch which made the dive in 1960 to the full 10,908 m.

We got our hands-on session with No. 47 wihc is a black dialed version in a stainless steel case and bracelet with high glass for the crystal. Rolex Deep Sea Special No. 47 a Rolex made Display Model of the No. 5 which was used in the 1960 dive into the Mariana Trench. You can view this at the Rolex Exhibition at Marina Square. The Rolex Deep Sea Special No. 47 features a very high glass which is used to protect the movement from the extreme pressures under 10,000 m under water. Rolex Deep Sea Special no 47 is a Display Model which Rolex makes for exhibitions. Rolex Deep Sea Special No. 47 on the wrist. As can be seen, the watch case sits very high, and with the high dome glass it is very thick. The watch measures a humongous 57mm x 40mm x 39mm. But keep in mind that Rolex did not design it to be worn on the wrist, but to be strapped to the outside of the Trietse.

Rolex was, understandably very proud of this achievement. For the first time, a watch has been to the very depths of the oceans. And it was still working perfectly after the dive. This was not only a great story, and excellent publicity. But one where Rolex had learnt a great deal from on how to build a better water proof watch. One of the technologies trickling from the Deep Sea Special is the concept of multiple locks for the crown to prevent water from getting into the case. The Triplock crown was the result of this, and was implemented in Rolex professional diving watches. Part 2 will be published next week, and where we will explore the 2012 dive to the Challenger Deep by James Cameron, and a hands-on session with the Rolex Deep Sea Challenger Display Model.