We mused over the concept of the Smart Watch in an Editorial earlier. There we explored the current offerings from the traditional Swiss watchmaking houses, and of course we touched on possibly one of the more significant launches in this new genre. We are still quite undecided if the haute horologie producers should get into the game of making these smart watches. But also wonder, if perhaps they did, should it be like what like the Tag Heuer Connected?

Essential Reading: What is a Smart Watch?

The watch itself is rather handsome, not unlike other Tag Heuer Carreras, though this is a new case style. The case is in titanium, with a nice, slim bezel with raised 5 minute markers. The black rubber silicon strap adorns the case. The dial is a screen covering all its real estate, and resolution of the screen is a rather low 360  x 360 at 240 ppi.

The pixels do show up on the screen on close examination, but at a glance, it does a surprisingly good job at a realistic looking dial of a standard watch. In comparison, the Huawei Watch has a 1.4-inch 400 x 400 display with a ppi count of 286; the highest of any Android Wear device to date. And the soon-to-launch LG Watch Urbane Second Edition will trump everyone with a 480 x 480 panel at 348ppi. Tag Heuer Connected showing the GMT screen. Users can currently choose between the GMT, Chronograph or a Live screen, each offering options on dial color.

It is fitted with a crown is at the regular position at 3 o’clock, and instead of being used to wind or set the time, is used to wake up the watch, which like a phone or other mobile device, the screen goes blank after a few seconds. The crown also acts like a “Home” button. 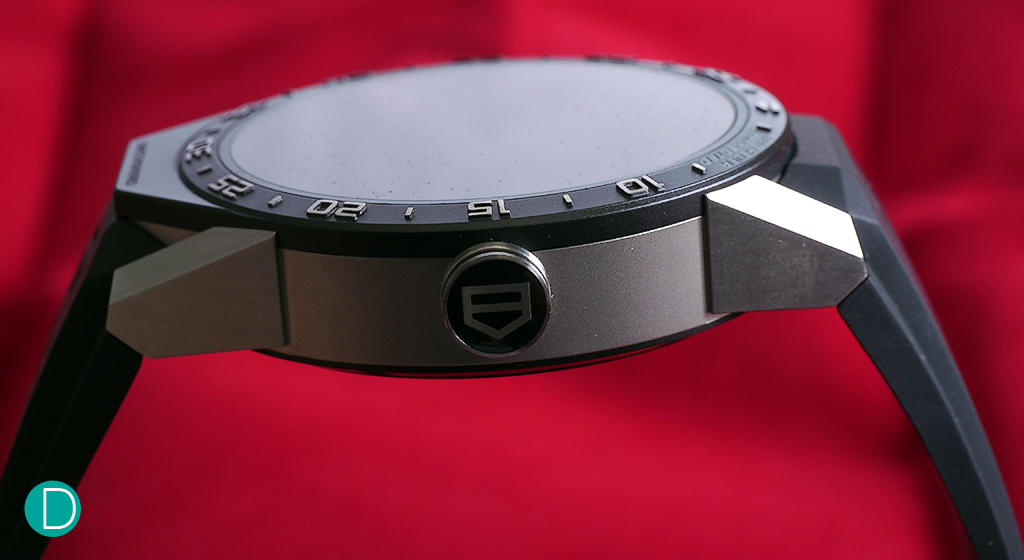 A regular looking crown at the regular position at 3 o’clock. Except this crown on the Tag Heuer Connected is used as a home button and to wake up the watch when it goes into battery conservation mode.

Essentially, this is a small computer for the wrist. Inside the case, the Intel Atom Z34XX processor. For silicon fans, it’s the same one found inside the Intel Edison development board, which was the platform for a host of wearable devices. System memory is 4GB of storage on-board – standard for Android Wear devices – and the Tag Heuer Connected is IP67 rated. Tag Heuer Connected showing one of the options for the dials. Shown here is the rather attractive blue chronograph.

Interestingly the case back is in plastic. We presume this is to allow for the signals to pass through. 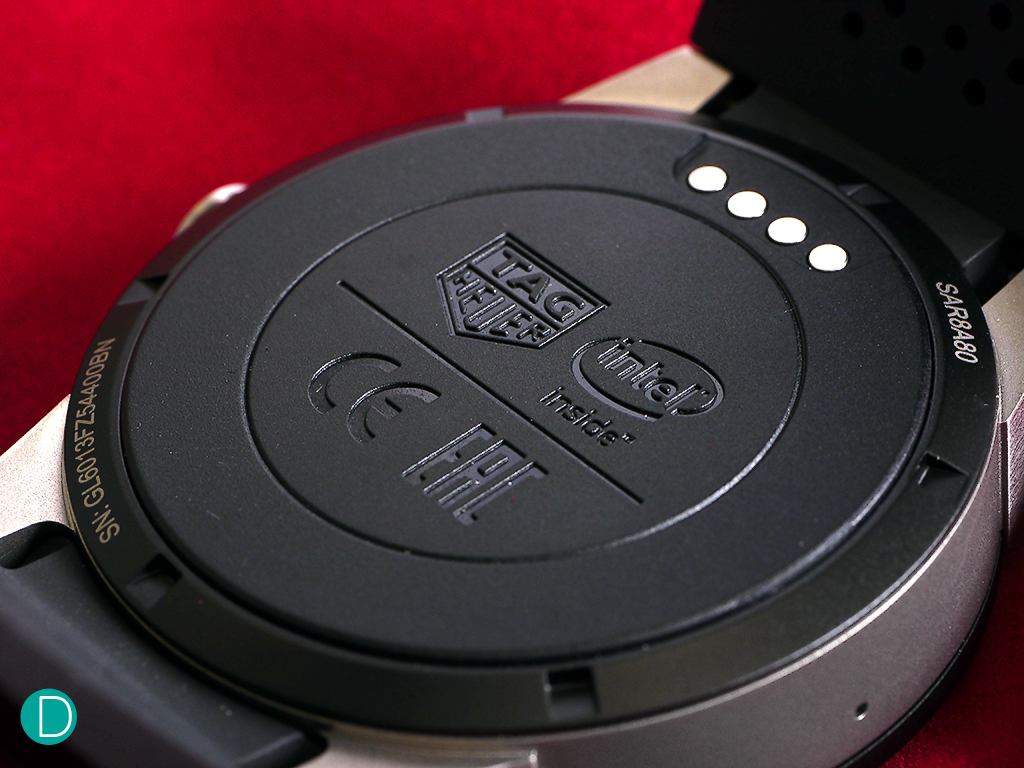 Caseback of the Tag Heuer Connected. The 4 contact points come into contact via the charging device while charging, to which it is magnetically attached, like the power cord of an MacBook.

Marked on the back of the case is the label “Intel Inside” and the Tag Heuer logo. While charging, one of the information pods is used to display the state of the battery.

The watch is paired to either an Android or iOS device, like a mobile phone. Setup can be done on the phone using the app provided, and new applications for the watch can be uploaded while the device is docked on its charging station. The operating software is Android Wear, a Google platform, not usually known for customization, but it is interesting that Tag Heuer is able to work with Google to develop custom watch dials and will release a special SDK (Software Development Kit for app developers to make apps to interface to the device’s hardware). A WhatsApp message as it is being received by the mobile device, sends a notification and a vibration to the watch. Multiple, and longer messages can be viewed on the small display by scrolling through the touch sensitive screen.

As the device has an internal storage of 4GB, one application is to sync the Connected to the phone and download music, and go for one’s run without the phone. The watch can connect to a Bluetooth headphone and allow monitoring of the sporting activity like a sports watch, and the user to listen to music without having to bring a phone. On the “Live Mode”, the counters, tradtiionally chronograph counters in a classical wristwatch is used to display divers information.
Tag calls the live information “interactive counters” and these appear on watch faces to give you easy access to things like weather updates, alerts or sports news.

The masterstroke: partnership with Intel and Google

Perhaps the most interesting aspect of this watch’s entry into the “Smart Watch” genre, and a masterstroke by Jean Claude Biver is this partnership between a hundred old Swiss watchmaker with two US tech giants: Intel and Google. This is quite unlike all other attempts by the likes of Montblanc, IWC, Swatch who try and incorporate the new technology into the watch.

Competing head on with the likes of Apple, Huawei or Samsumg to create the fastest, latest, highest, most impressive Smart Watch will end in futility, as these tech giants as corporations are larger than the entire Swiss Watch industry. We think this is a clever move by Jean Claude Biver to quickly seal the deal with two of the largest and not only ride on their technological prowess, but also keep them out of Tag Heuer’s turf. An interesting article comparing some of the best Smart Watches is carried at Wearable’s revew linked here.

We think this is a smart entry into the market as the partnership will let the tech giants focus on what they already know how to do best, and let Tag Heuer concentrate on making the wrist attached mobile device look and feel like a traditional wrist watch.

Tag Heuer also takes cognizance that the lifespan of a tech device is perhaps two years, as compared to the indefinite lifespan of a mechanical watch. Tag Heuer offers a very interesting upgrade program. The current price for the Tag Heuer Connected is S$2,100, and the owner can opt to upgrade this to a Tag Heuer Carrera mechanical watch for a further S$2,100. The new upgrade watch will be specially designed only for upgrading Connected owners and will not be available for regular retail. The screen “in between watch dials” . The watch displays the dials/functions available, and the user selects by swiping and tapping on the desired option.

The chapter has not closed yet for the genre of Smart Watches. Indeed, it has only just begun, so we will not be offering any concluding thoughts on the Tag Heuer Connected, but rather propose some further thinking on both the part of the potential owner and also the hard core mechanical watch enthusiast.

As we discussed in our earlier article, the race for the wrist real estate is now on. Tag Heuer is probably the first serious attempt at addressing this genre. The other offerings, viz Montblanc, IWC, Swatch, et al, have all a “me too” flavor which is refreshingly not present in the Connected. In this, Tag Heuer Connected has carved out a niche to play with the (Tech) giants, and we hope will result in more innovative applications, and more interesting Smart Watches.