Jaeger LeCoultre is one of the amazing watchmaking houses who are not only one of the very few who can claim to manufacture almost everything in house, but also one which continues to push the envelope of fine watchmaking. Not satisfied with a moonphase display accurate to 1 day in 122, they went all the way, and broke the record of 1 day in 1058 (held by sister company Lange in their 1815 Moonphase) by almost 3 times! The Jaeger LeCoultre Duomètre Sphérotourbillon Moon. Limited edition of 75 pieces in platinum only. And featuring the magnificent dual wing concept of the Duomètre and the advanced flying tourbillon on a platform which rotates like a cone – the Sphérotourbillon.

The Duomètre Sphérotourbillon Moon is a stunning new watch, announced in SIHH 2015, and we have featured the press release with full specifications here. Recently, we got a hands-on session with the watch and bring you this review. The watch is visually very appealing, with a large, and aesthetically pleasing cutout for the Sphérotourbillon taking prime position at the dial’s 9 o’clock position, and the large moonphase display in another cutout under the main hour/minute sub-dial.

The watch features the now iconic JLC dual wing concept, which they call the Duomètre: this is a system where two trains regulated by a single organ, in this case the Sphérotourbillon. This concept allows the timekeeping train to be dedicated to accuracy, and the other train to the secondary complication, in this case the ultra-accurate moonphase.

The moonphase display is accurate up to 1 day in 3887 years! And is the most accurate moonphase ever created. The magnificent lapis lazuli dial on which the gold applique moon and stars are places adds to the visual impact and beauty of this watch. The moonphase, displayed as a cut out on the hour-minute subdial. The gold moon and stars accent the magnificent blue of the disk made from lapis lazuli. Note also the texture of the dial, which is reminiscent of a rough paper, and in our view, very handsome indeed. The Sphérotourbillon: magnificently crafted and finished. The main tourbilllon rotates on its axis one revolution every 30 seconds, and the secondary axis, tilted at 20° rotates once every 15 seconds. This is a visual treat, and mesmerising.

But the tourbillon holds another trick up its sleeve. At the caseband at 2 o’clock is a button. When pushed, it resets the small seconds hand to zero, and keeps it there as long as the button is depressed. The movement train and the regulating organ is not stopped, but the seconds hand reset and held in place till the button is released, instantly synchronizing the watch to the time signal. 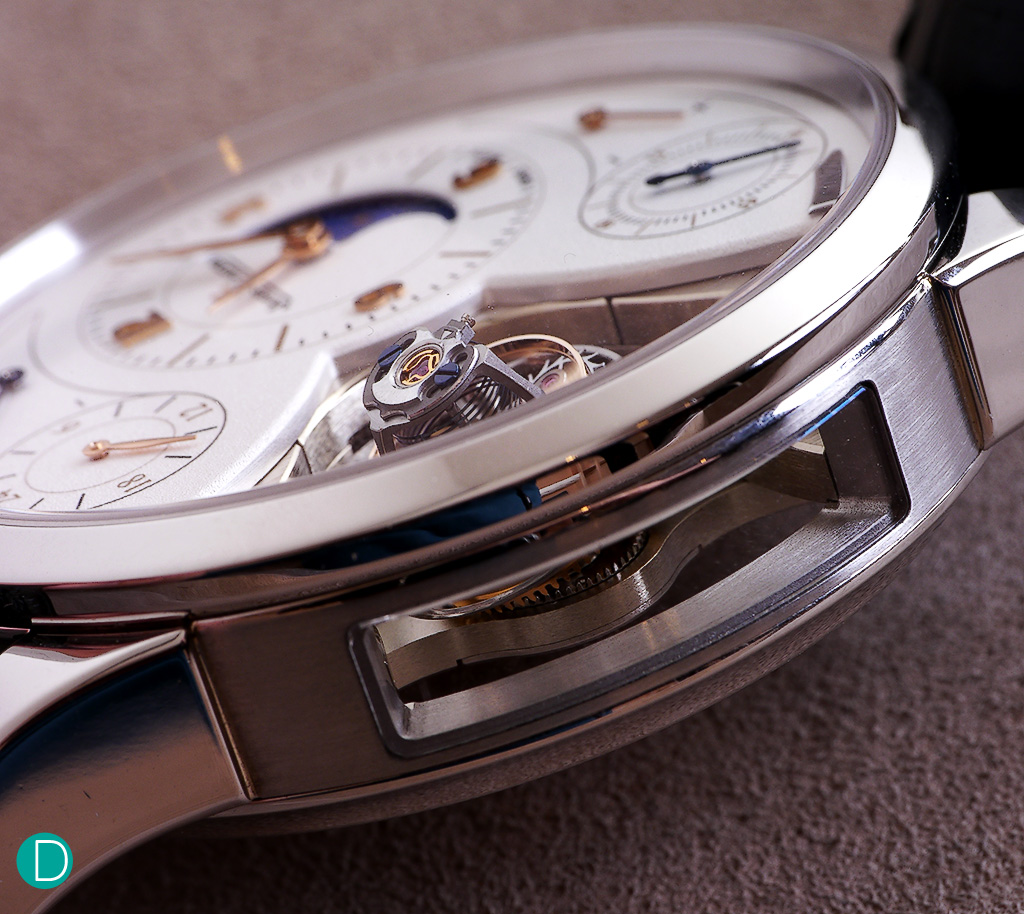 At the case side, there is a window, cut into the case band to allow a glimpse of the magic of the Sphérotourbillon.

The movement is classical JLC Duomètre: nicely finished, beautifully laid out, with classical aesthetics. The finishing is excellent. The wolf’s teeth on the barrels which engages to the elaborate click system is a throwback to the traditional Valee de Joux classical watchmaking. As is the movement in nickle silver (aka German Silver or maillechort) and the beautifully polished anglash that adorns all the bridges. The bridges also feature the sharp outward pointing edges and a few inward pointing ones, which are impossible to execute by machine and must be painstakingly done by hand. Jaeger-LeCoultre Calibre 389, handwound, classically laid out movement.
Note the dual mainsprings, each with its own elaborate and beautifully designed and finished click system. It is also clear from the photograph that the two trains and the single regulating organ.

On the wrist, the 42mm diameter case, 14.3mm high is very comfortable. And looks amazing.