We have been quietly following Steven Holtzman and Maîtres du Temps since the unveiling of Chapter One in Basel in 2008. The company have always been innovative, and used the concept of partnering with the independent brains to offer unusual products. The first salvo was fired with the Chapter One, collaborating with Peter Speake-Marin and Christophe Claret, and the second one unveiled in 2009 with Peter Speake-Marin and Daniel Roth. And the Maîtres du Temps Chapter Three Reveal was a collaboration with Kari Voutilainen and Andreas Strehler, and was announced in 2012. The Maîtres du Temps Chapter Three Reveal, shown here in red gold, and a mightnight blue dial.Note that this is a collector owned watch, and as usual, we allow the “lived-in” appearance to show. Bits of dust and spots are common even with the most careful owner’s wear, and do not detract from the overall beauty of the watch.

The concept of collaborative projects, especially amongst the smaller manufactures to synergize each other’s strengths is not new. As early as 2001, Maximilian Büsser struck out with this innovative idea with Harry Winston and established the Opus Project. The project is admired by the industry as highly interesting and innovative, and yielded some horologically important watches in collaboration with the brightest minds in the industry. Among them being the Opus 3 with Vianney Halter, Opus 5 with Uwerk, and remarkable Opus 11 with Denis Guiget. Amazing pieces. Max went on in 2005 to venture out as his own, using a similar concept as Max Büsser & Friends (MB&F) designing interesting, and visually stimulating watches in collaboration with the best minds in the business. Maîtres du Temps, translated in English means Masters of Time, uses a similar modus operandi. Headed by Steven Holtzman and collaborating with some of the genii of the industry, 3 lines of watches have been produced to date.

The Chapter One and Two Collection have been in production since 2008 and 2009. Today we focus on the Maîtres du Temps Chapter Three Reveal, which was shown for the first time in 2012. Maîtres du Temps Chapter Three with the Vertu luxury mobile phone.The watch shows the panels at 12 and 6 having slid open to reveal the rollers which show the second timezone at 6 o’clock and the day/night indicator at 12 o’clock.

While some of us at Deployant found the Chapter One and Two to be a tad too loud. The watches are large, unusually shaped and tend to shout, jarring one’s senses. The Chapter Three is the polar opposite. It is quiet, classical and subtle. It reaches to the classic horology connoisseur where Chapters One and Two failed. At first glance, the Kari Voutilainen DNA is fully apparent, perhaps overtly so…but more on this as we conclude later. The case design, the dial design, layout, specifications and the finishing are all have the Voutilainen fingerprint. Maîtres du Temps Chapter Three Reveal. Showing the characteristic DNA of a Kari Voutilainen watch. From the classical looking case to the hand guilloche dial with appliques markers in Roman numerals. Even the javelin hands, though not a Voutilainen signature points to the same genre of gentility, and subtletness.

But the watch hides its most interesting feature. A small coaxial button at the crown, when pushed will cause a trapdoor panel at 12 o’clock and 6 o’clock to drop. Releasing the coaxial button will see the panel move aside, and the Maîtres du Temps signature rollers revealed, showing a second timezone and a day/night indicator for that second timezone. Another push of the button will swing the panels into place, and releasing it will allow the panel to rise up to the level of the dial, concealing the rollers. Very discrete and subdued, almost to the point of disappearing. Total class.

To maximize legibility, the second time zone at the bottom of the dial is displayed on two separate rollers: hours 1–6 on one and 7–12 on the other. When transitioning from 6 to 7 or 12 to 1, the superseded roller slides horizontally out of the way, and the new roller moves into place, an innovative mechanism that has been awarded a patent. Using two rollers instead of one means that only six numbers must be displayed around the circumference of each roller, enabling them to be twice as large, so twice as easy to read.

The movement is a classical movement, designed and built by Kari Voutilainen. As such, it too carries many of the Môtiers manufacture’s trademarks. The movement carries the traditional finissage of the Jura, with beautifully shaped plates featuring many angles, both inward and outward. Côtes de Genève, perlage, anglage, and polished screw heads are all observed in the movement. We also note the polished countersinks for the screws and the jewels. The finishing is top grade, and the visual impact of the movement is one which can take one’s breath away.

Technically, the movement is designed to be an accurate timekeeper. It is regulated by a Straumann escapement, which features a lightweight energy-efficient escape lever and balance spring with a Breguet overcoil. 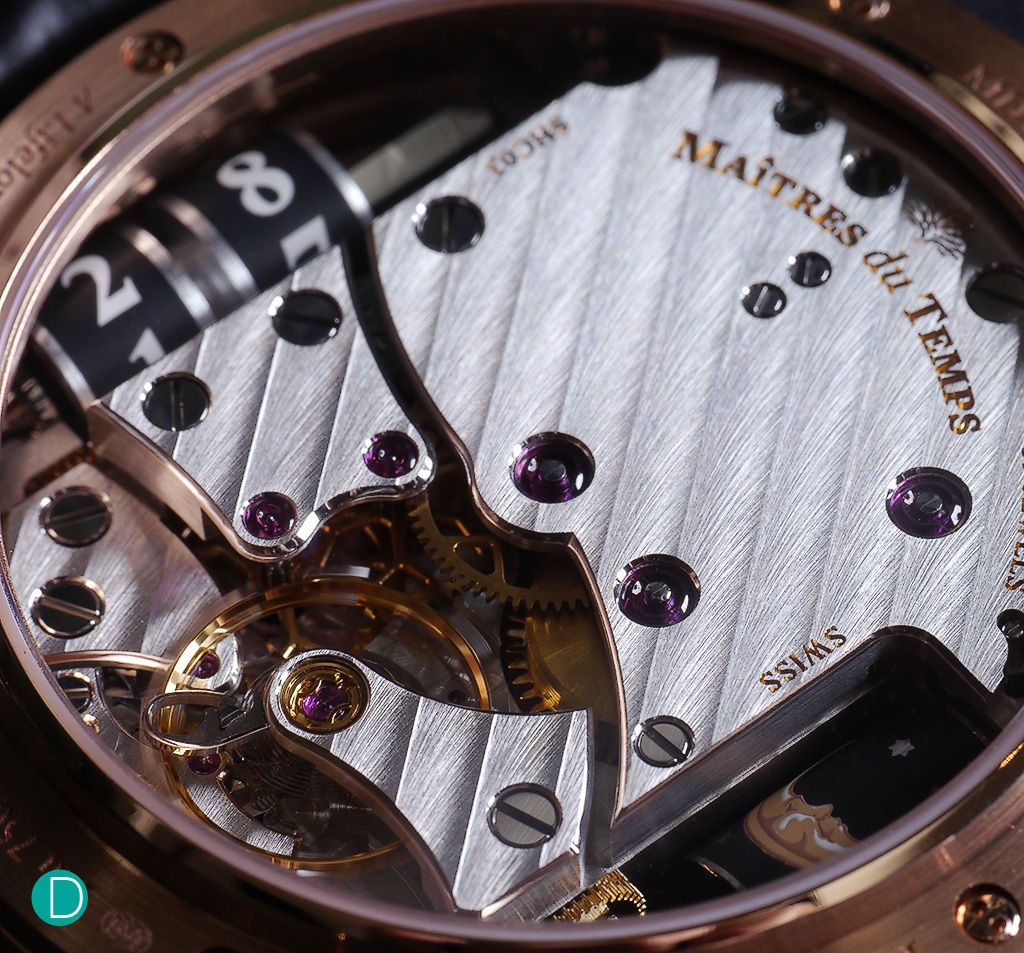 Another view, closer this time, of the SHC03 movement. Note the inward and sharp outward angles on the main plate as well as the balance cock. The smaller plate holding the second and third wheel shows a smoothened curved design around the jewels holding the wheels. Would be an even nicer treat to see this edges with inward curves.

Note also at the top and bottom of the movement, near the lugs lie two sets of rollers. These are reminiscent of the Maîtres du Temps trademark rollers seen outboard of the case in Chapters One and Two, but carried on-board the main movement here in Chapter Three. This significant piece of work to integrate the rollers was carried out by Andreas Strehler.  Andreas was also responsible for the switching mechanism to allow the panel to open and slide away to reveal the rollers. The system is done so well, that the unsuspecting observer will be hard pressed to find the trapdoor panel, and will be erstwhile surprised when the owner demonstrates this feature by pushing and releasing the coaxial button at the crown.

“Andreas has lent the project an impressive level of expertise,” says Kari Voutilainen. “While I focused on developing the majority of the movement, Andreas conceived and designed new mechanisms, including the one for operating the dial panels. What’s more, Andreas’s knowledge and experience in manufacturing components has meant that the creation of this timepiece couldn’t have gone more smoothly. It has been a real pleasure working with him.” Detail of the engraved and gold leaf moon in a midnight blue sky decorated with stars.A cogwheel at top left is visible beside the moon engraving which gives a hint at the mechanism for the switching panels on the dial side.

The mastery of technique is complete. The rollers show very beautifully engraved images representing the sun and moon to correctly show if its day or night at home.

A travel instument equipped with date, moonphase, concealed second timezone and day/night indicator. Does it do the job as a perfect, discrete travel watch? To us, it certainly qualifies as one of the candidates for such a title, if one exists. The Glashütte Original Senator Cosmopolite is perhaps another candidate. And possibly one might want to include the controversial Patek Philippe Pilot Travel Time. In any case, the field is small, and we think the Maîtres du Temps Chapter Three Reveal stands in good stead within this highly select company. 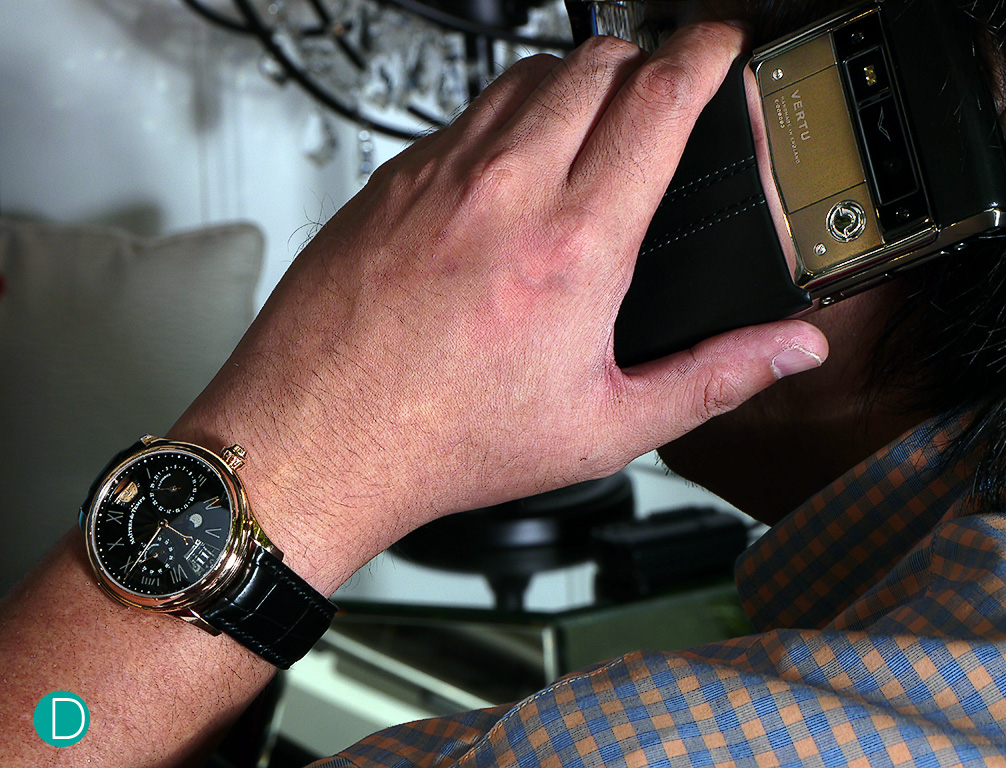 The Chapter Three Reveal certainly surprised this editor in its finesse, and subtlety, especially since Chapter One and Two struck with a totally and diametrically polar chord. The dissonance of the earlier chapters made the quiet beauty of Chapter Three even more sweet. The entire aesthetics harmonize together exceeding well. Perhaps the only afterthought is that the Voutilainen DNA is perhaps too strong. With the panels closed and the rollers hidden, one can mistake the watch as a Voutilainen. Indeed a quick Instagram picture after I met with Steven in Basel quickly garnered a lot of likes, but also comments that its a nice new Voutilainen. Perhaps this may play into Maîtres du Temps’ hand, and bring the classical community to its fold. But perhaps it may lack the Maîtres du Temps’ own DNA and stamp, which is only revealed (love the play of words to use Reveal as part of its name) when the panels slide apart. But we do love Chapter Three, and give its the two thumbs up!