Greubel Forsey is one of the tiny companies (they make a total of 100 watches a year) that every serious collector keeps at the corner of his eye. Observing. Watching. Often salivating and dreaming. Indeed the firm, the collaboration of Robert Greubel and Stephen Forsey have been only making watches worthy of grail status since they started in 2004. We once described Stephen Forsey as one of the gods of watchmaking. And we stand by this claim as we examine and analyse the Greubel Forsey Double Balancier à Différentiel Constant.

As usual, we introduced this watch with press material in an article with first impressions during the SIHH 2016, where the watch was unveiled. We had the opportunity to spend some time with Stephen Forsey and also to examine the new watches. The is no mistaking the visual impact of the Greubel Forsey Double Balancier à Différentiel Constant. Strong in design, with a partially open dial, to expose the most precious secrets of its movement.

We begin with first visual impressions. There is no mistaking the visual impact of the GF Double Balancier. The feeling of depth, space, structure is strong. Indeed, as we have mentioned before, Gruebel Forsey watches were what caused us to coin the term “watchscapes”. Like landscapes which are created by God. These watchscapes, with multiple levels, layers, minute details created by the watchmaking gods.

The case is a quite nicely sized 43mm diameter, and in white gold. Fit and finish of the case is magnificent, as is deserving of a watch of this stature.

The dial is cut away to reveal the guts of the working system of the movement. Visible are the double balances, each inclined at 30°, set at an angle to each other, ensures that in any position the watch might be at the moment, one of the balances will be near to ideal. But we get ahead of ourselves, and almost jumping into the movement. To continue… 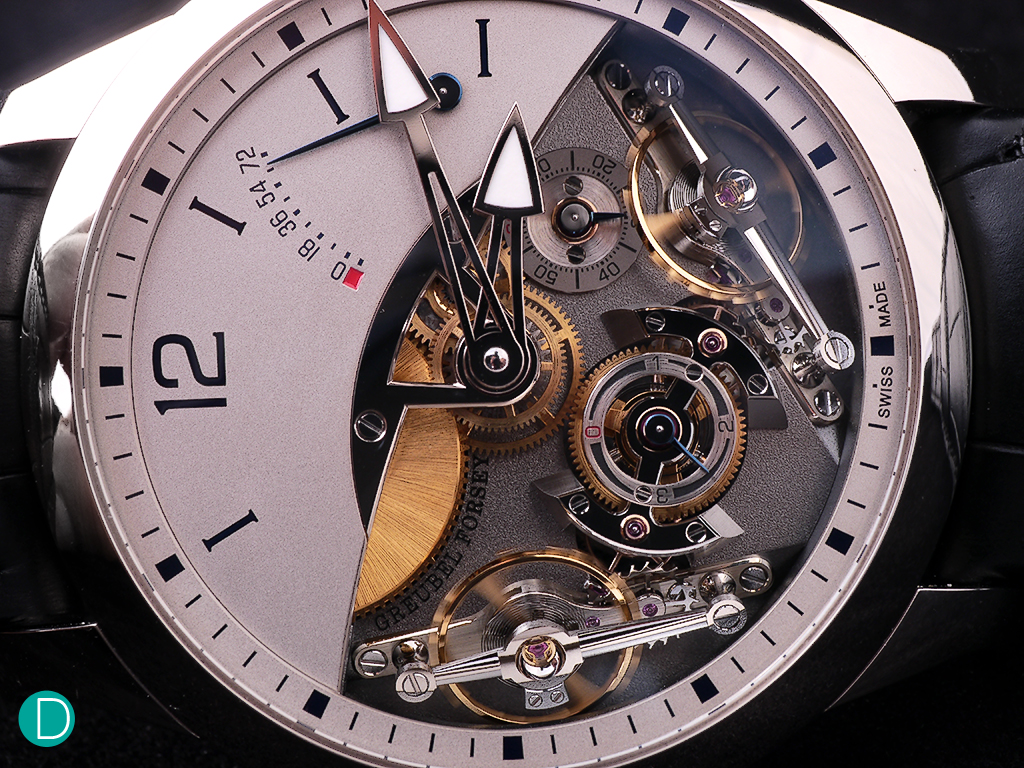 The dial proper is small, and carries with it the fan like shape of the power reserve indicator between 1 and 3 o’clock. The watch has a power reserve of 72 hours.

The dial has a grained matt finish, and contrasts with the black printed arabic numeral 12, and bar markers for the rest. A ring carying the minute markers surround the dial, with each 5 minute marker (also hour marker) in bold square dots, and the minutes in bars. The dial, if examined on its own, is easy to tell that it is made to exacting and very high standards. But from a design and layout perspective it remains unremarkable.

When opened up to reveal the precious guts of the movement, it shows its brilliance. The cutout is nicely thought out, with its edges covered by a plate of black polished steel, which also then extends to provide support for the pivots for the hands. The plate is perforated to reveal part of the movement, and gives the watchmakers the opportunity to execute 4 additional acute internal angles. The cutout also reveals part of the mainspring barrel.

The hands are in gold, and have a skeletonized arrow design, tipped with SuperLuminova. Truly a spectacle. And an astounding technical achievement in horology. The movement one of the few Greubel Forsey movements which do not feature a tourbillon. But it does have one other GF signature. An inclined balance. The two balances are inclined to the dial at 30°. Each beating independent of the other at 21,600 bph.

The concept of the double balance, linked by a differential to a single wheel train is not new. The basic idea is to allow both balances to beat on its own, independent of the other, and having the beat errors of each cancelling the other out. To enable this, a differential is required to deliver power from the single train to both balances. To understand the simple differential, this YouTube video is instructive.

Philippe Dufour was probably the first to introduce this in a wristwatch with his iconic Duality way back in 1996. And even Philippe himself was inspired by pocket watches from the turn of the century. In the Duality, he miniaturized the principle of using double balances connected by a differential. But the balances are not inclined. Gruebel Forsey themselves experimented on double balances as early as  1999, as a part of their EWT (Experimental Watch Technology) platform. The first prototype to feature a fixed double oscillator, the Double Balancier Incliné, was presented at Baselworld in 2009, as the sixth Greubel Forsey invention.

But the culmination of this research and work now resides with the Double Balancier à Différentiel Constant.

The movement is for all to see from an opening on the dial. In the center left of the hour/minute pinion tower is the spherical differental. Above and below it, are the double balance wheels, angled at 30°.

The principle of the differential as described in the application to automobiles above is the same as applied to watches. The Dufour Duality differential is modeled after what is described above. The same mainspring and drive train delivers power to both the balances, and each of the balances are independent of each other. Add inclines to the balance wheels, the level of difficulty increases exponentially. The balance wheels are designed to inclined at 30° to the dial surface and this ensures that they are also inclined to each other.

The most common resting position for a watch is either crown up/down  or dial up when set on a table top, or vertically as in a safe. In these positions, the beat errors are the greatest. By setting the balances at 30°, GF tries to limit the time each balance spends on the horizontal or vertical positions even when the case is horizontal or vertical. And even if one balance is in such a position, the other will not. As is typical in any Greubel Forsey, the fit and finish of the watch is ne plus ultra. Top of the top. The absolute best. Each movement component is manufactured in-house in their facility in La Chaux du Fonds. We visited the manufacture in 2014, read our account here. Needless to say, every detail is attended to in the Double Balancier. The bridges are magnificently polished, with care and attention to the anglage, countersinks, polishing of the edges, screw heads, and even each tooth of each wheel is nicely polished. From the caseback, the differential is visible, but the movement plate made with a frosted finish does not show much.
Note the polished steel plates which carry the bridge for the differential, as well as the plates for the name and serial number. Note also the use of gold chatons to sit the jewels.

The watch, as presented and explained by Stephen Forsey to us, is magnificent. It will appeal to the technical collector, seeking to own the very best of modern horology. Not only in terms of technical breakthroughs, but also in the preservation of the art of the traditional finishing and savoir faire.

As comparisons, the obvious one is to draw parallels from the Dufour Duality (not available new anymore). But the Duality is a more discrete watch, with classical (small) dimensions. The double balances of the Duality is not visible when the watch is worn, and can only be admired when the case back is shown. The differential of the Duality is so small that it is difficult to see with the naked eye. And as neither of the balances are inclined, the differential system is arguably simpler.

Another possible comparison is to the MB&F Legacy Machine no 2 (S$226,000 in red gold and S$275,100 in platinum). The obvious similarities are the “bare it all” approach. The LM2 also shows the dual balance wheels in prime real estate of the dial, hovering, seemingly unattached, but yet beating independently of each other only to be connected by a differential to the movement train. But the LM2’s balances are also not inclined, and as far as we can tell (no we did not get to disassemble the movement to compare), it is very similar to the Duality. Indeed Max Büsser paid homage to Dufour as the inspiration. On the wrist, the 43mm case is nice and comfortable. Though the case is thick, measuring at some 15mm (a guess from eyballing the watch on wrist, as GF has not yet released technical details)

To sum up, the Greubel Forsey Double Balancier à Différentiel Constant is a grail watch. Like all Greubel Forseys. It is not the most affordable, that goes to the steel version of the Signature 1. It is not the most complicated, or the most expensive. But it certainly is enough. It satisfies at many levels. At a visual level for the dimensionality and aesthetic treats it offers as the eye wanders on gazing on the watch, each time discovering some new detail. Each time appreciating the immense skills and efforts put in to create the watch. It satisfies at the level of the technical virtuosity it achieves, as far as we know, safe for its own more complicated brethen (the Quadruple Tourbillon) it stands alone. It satisfies at the supreme level of finishing that has been lavished on a watch. A true masterpiece. What else can one expect from two of the gods of watchmaking. Incroyable.