Dress chronographs have always been very desirable timepieces to watch connoisseurs. For one, it is often versatile enough to be worn with a suit in the boardroom or with a polo shirt in a cafe. For another, the technicality, as well as the fast-moving nature of the complication fascinates us greatly. The best dress chronographs are a product of both exceptional watchmaking and craftsmanship, and few are better than the A. Lange & Söhne 1815 Chronograph. The case of the 1815 Chronograph in Pink Gold measures 39.5 mm in diameter and 11 mm in height. The watch is noticeably smaller than the Datograph Up/Down, which measures 41 mm x 13.1 mm. While it isn’t exactly dainty, the 1815 Chronograph does show restraint in its size and is thus more suited for formal events than the Datograph is. The case is Lange stock standard: rounded, polished bezel; brushed case band; brushed pushers with polished bevels; notched lugs; generally overbuilt and just gorgeous. The push action of the pushers on the 1815 Chronograph in Pink Gold is buttery smooth.

The dial design of the 1815 Chronograph has evolved over time. The current design began with the white gold boutique edition which features blue numerals, scales and inscriptions. The 1815 Chronograph Boutique Edition was introduced back in 2015 and its dial design superseded an older, more minimalist design. Much like the boutique edition, the new 1815 Chronograph in Pink Gold has an inner flange printed with a pulsometer scale and the brand marquee, something that was entirely absent in the previous design. The positioning of the sub-dials and certain inscriptions have also changed slightly, but apart from that, other elements on the dial remain familiar. True to the identity of the 1815 collection and the heritage of the brand, the 1815 Chronograph in Pink Gold marks the hours with inky Arabic numerals and features railroad-style scales on the seconds sub-dial and minute counter. These were design cues found on pocket watches made by F. A. Lange in the 1800s.

The hands on the dial are beautifully crafted in pink gold to match the case. We particularly like the long, sweeping, lancet-style chronograph seconds hand, which contributes very significantly to the elegant vibe of the watch. There is a question of whether the hands should be more aesthetically divergent in order to facilitate the distinction between time-telling and chronograph functions. A good implementation of this design consideration is found in the Patek Philippe Ref. 5170G-001 where the chronograph hands are blackened to contrast against the time-telling hands in standard white gold. Of course, there are pros and cons to this. Having all the hands on the 1815 Chronograph in pink gold confers greater coherence in design and a dressier aesthetic than the alternative approach of using white chronograph hands. The trade-off, of course, is the lack of separation between time-telling and chronograph functions. The black dial of the 1815 Chronograph in Pink Gold is hauntingly handsome, as are all black-dialed Lange watches.

The 1815 Chronograph in Pink Gold is equipped with a black dial (with white inscriptions for contrast), and the result is a timepiece that is contemporary, suave, and still very much so, elegant. Black-dialed Lange watches have some sort of a cult status within the watch community. They don’t necessarily have a higher market value but they are adulated nonetheless for their brooding good looks – it’s just something the brand has mastered over the years. The combination of coloured gold with a black dial has always been well-loved by watch enthusiasts. A white gold version of the watch in review was introduced last year. And while it is no less a stunning watch – as evidenced by the fanfare from watch enthusiasts – the 1815 Chronograph in Pink Gold is a different beast altogether. The marriage of gold and black has been a thing since ancient times, and no other combination is as sophisticated and striking as it. The 1815 Chronograph in Pink Gold has more flair and character compared to its white gold sibling, and is just a bit more decadent as well.

Powering the 1815 Chronograph in Pink Gold is the in-house designed and manufactured Calibre L951.5. The 354-part movement operates at a traditional 18,000 semi-oscillations per hour and has a power reserve of 60 hours – a substantial upgrade from the 36 hours provided by the original movement found in the first generation 1815 Chronograph. The Calibre L951.5 is a column-wheel chronograph movement with a horizontal clutch. This arrangement allows the chronograph mechanism to be displayed in all its glory through the sapphire crystal case back. What makes the Calibre L951.5 so special is the extra features it comes with, namely a precisely jumping minute counter, and the flyback mechanism. With the former, the chronograph minute hand advances by exactly one graduation after 60 seconds have elapsed, even if time measurement is stopped at that very moment. This removes any doubt and ambiguity on whether the counter hand has already incremented forward or not. The flyback mechanism is perhaps the more visually exciting of the two perks. The function allows an ongoing time measurement to be interrupted and a new one to be started instantaneously by merely pressing a button. It combines three steps – stop, reset to zero and restart – into one. In chronographs without the flyback function, these three steps must be executed consecutively. These two additional features may not sound like that big of a deal, but you’d be surprised at how sparse they are even amongst high-end chronographs. The Calibre L951.5 as seen through the sapphire crystal case back.

Unless you’re new to this hobby, you’ve probably heard about the “legendary” Datograph movement from just about everyone concerned with high-end watchmaking. In most cases, they are referring to the astounding architecture and aesthetics of said movement. One peek, and it’s enough to send a watch lover into a frenzied stupor. The Calibre L951.5 looks virtually identical to the Datograph’s movement from the case back. That’s because they belong to the same family, the original Datograph movement being the Calibre L951.1, and the current Datograph Up/Down’s being Calibre L951.6. Essentially, the movement of the 1815 Chronograph is the Datograph’s sans date and power reserve displays. Every single component is lavishly finished, from the black-polished 8-tooth column wheel to the levers of the flyback mechanism. Plenty of inward and outward angles can be found on the beveled edges, a tell tale sign of the great deal of skill and effort devoted to the movement. And then there’s of course the signature hand-engraved balance cock, a crowd pleaser. There’s a reason why the Calibre L951 is feared by rivals, loved by the people (including Mr. Philippe Dufour), and started the in-house chronograph revolution back in 1999 – it’s because it’s just that good. The Calibre L951.5 is testimony of the capabilities and ambitions of Lange. One only needs to examine the design, functionality, and decoration of the movement to understand why. 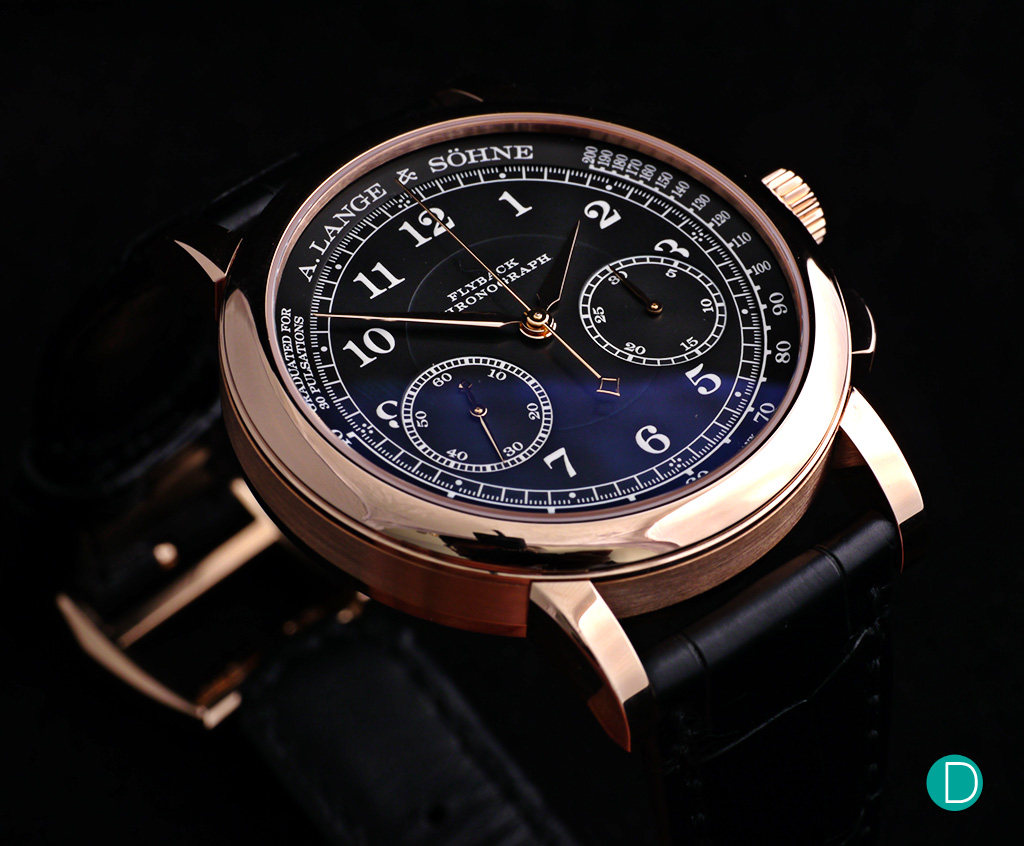 The latest iteration of the 1815 Chronograph is available in white gold as well, with either a black dial or a silver dial with blue inscriptions (boutique edition).

Its most prominent rival is of course, the Patek Philippe Ref. 5170. The Ref. 5170 is virtually identical in size to the 1815 Chronograph at 39.4 mm in diameter (v.s. the Lange’s 39.5 mm). It too is designed with elegance in mind, and few chronographs in the market are dressier than it. The Calibre CH 29-535 PS that beats within is designed and manufactured in-house. The movement, however, does not have a flyback function like in the 1815 Chronograph. From a finishing and aesthetics standpoint, the Calibre CH 29-535 PS is superlative but isn’t at the same level as its counterpart from Lange; the layout and finissage of the Calibre L951.5 is palpably more appealing (uncapped column wheel, inward angles… to point out a few aspects). All that said, the Calibre CH 29-535 PS is a more modern movement and – functions notwithstanding – technically superior to the more traditional Calibre L951.5. At over EUR70,000 (or over SGD100,000), the Ref. 5170 (rose gold variant) costs SGD30,000 more than its Lange equivalent, and is similar in price to the Datograph. 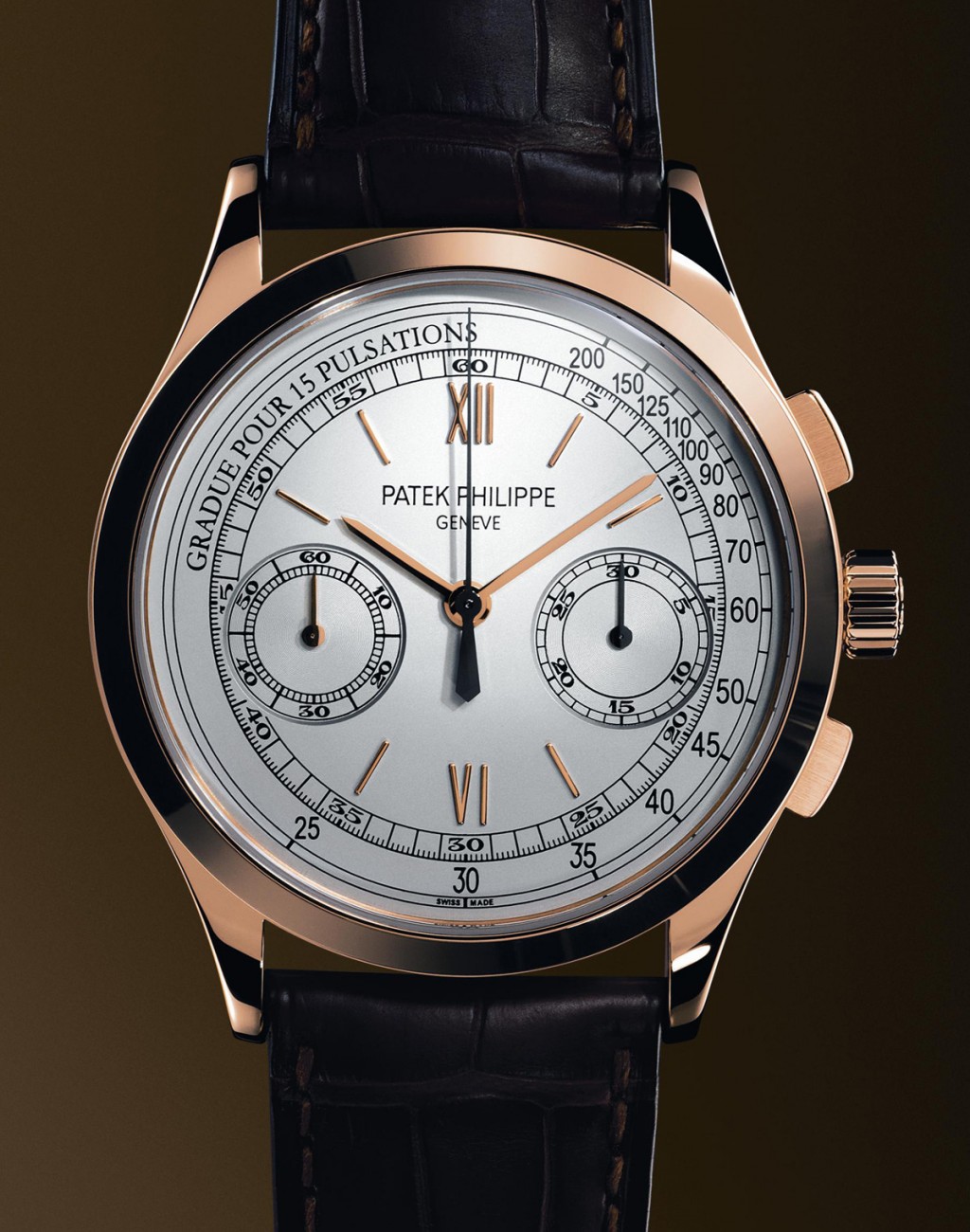 The Patek Philippe Ref. 5170 is a household name in high horology. It is the prototypical high-end dress chronograph with its timeless design and excellent craftsmanship.

Another fine specimen that vies for the attention of connoisseurs is the Vacheron Constantin Historiques Cornes de Vache 1955. In terms of market sentiment, the Cornes de Vache 1955 fares above the Patek and the Lange. In other words, it is the apple of the watch community’s eye. The niche of vintage remakes is a minefield. Many manufacturers attempt to navigate through it to the promised land. Most, however, fail to do a satisfactory job and get blown up into (faux patina-coated) pieces. This is why Vacheron Constantin’s Historiques collection and in specific, the Cornes de Vache 1955, is such a breath of fresh air. The Cornes de Vache 1955 is inspired from the Ref. 6087 that was made in 1955. Far from being pretentious, the watch is a respectful tribute to said reference and yet has its own identity in check. How good is the Cornes de Vache 1955? Suffice to say, it looks better than the original – this is rarely the case with remakes. In fact, it is one of, if not the best-looking dress chronograph out there. Apart from its vintage-style, bi-compax dial layout, there are those “cow horn” lugs that seem to cause an opiate-like high even in the most seasoned of connoisseurs. The Cornes de Vache 1955 is the smallest of the three, at 38.5 mm x 10.9 mm, something the traditionalists will appreciate. Beating inside the watch is the Calibre 1142, which started off as a Lemania movement but made Vacheron Constantin through and through by the manufactory’s watchmakers and finisseurs. Its superb finishing is attested by the Hallmark of Geneva engraved on the balance cock. Nevertheless, it has to be said that it is not to the level of Lange’s Calibre L951 – but then again, you’d be hard pressed to find a chronograph movement from any point in history till present that looks better than Lange’s. At under SGD90,000 for the rose gold variant, the Cornes de Vache 1955 sits between the Patek and Lange on the price ladder.

Who would’ve thought that a young German brand would be making haute horlogerie‘s most revered chronographs? Most certainly not those who first saw the Datograph (and almost wet their pants) in 1999, an era when Lange was finding its foothold in the highest echelon of watchmaking. With the 1815 Chronograph in Pink Gold, the brand continues to work on how best to dress up its legendary chronograph calibre. Dare we say, this is one of Lange’s best interpretation of the reference so far, if not the best.