The case of the new Ref. 5170P measures an elegant 39.4 mm in diameter and 10.5 mm in thickness. The design of the case is utilitarian, though every surface is immaculately polished. The watch has a generously sloped bezel that will ensure that it slides underneath a dress cuff or tight sleeve with minimal fuss. Rectangular pushers located at the 2 and 4 o’clock positions allow for comfortable and gratifying actuation of the chronograph functions. These pushers are finished in a simple yet striking manner, brushed on the sides and polished on top for a pleasing contrast. 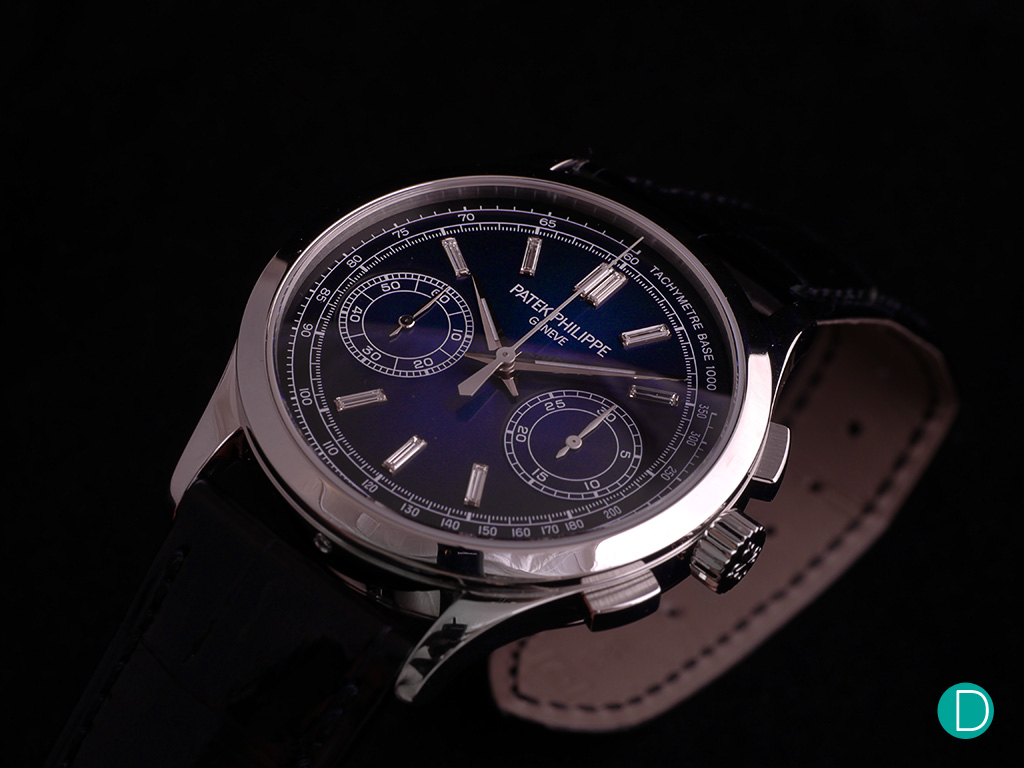 The case of the Ref. 5170P is a Patek Philippe standard issue; it has got no frills but is nevertheless flawlessly crafted and polished.

The 2017 Ref. 5170P has a mesmerising blue sunburst dial that gradates towards black at the periphery. As seen in previous iterations of the reference, the watch has a bi-compax chronograph layout with small seconds at 9 o’clock and the chronograph minute counter at 3 o’clock. While normally printed with a chronograph seconds scale with or without a pulsometre scale, the dial of the 2017 novelty does away with either and opts for a tachymetre scale for the first time. Also a first for the reference are the applied baguette-cut diamond hour markers. These unique hour markers were first seen in the 40th anniversary Nautilus models and we must confess that they are very well-executed on the Ref. 5170P. Plaudits to the team at Patek Philippe responsible for incorporating diamonds into the design of a timepiece in a manner that is as discreet as it is tasteful. Another design feature on the dial worth noting are the whitened feuille minutes as well as centre seconds hands for the chronograph, designed to distinguish them from the other hands associated with time-telling and to improve legibility. Interestingly, the manufacturer had decided to go for lume-painted, dauphine hour and minute hands in the new Ref. 5170P. These hands, together with the gradient dial and tachymetre scale, result in what is actually the most sporty and contemporary Ref. 5170 to date. All these elements combine to form a look that is unprecedented in the brand’s history of simple dress chronographs. Let not the diamond hour markers deter you, for they are discreet and tastefully applied. The Calibre CH 29-535 PS debuted with the Ref. 5170 in 2010 to permanently replace the old Lemania-based Calibre 27-70 PS as the brand’s movement of choice for hand-wound chronographs. The Calibre CH29-535 PS is special to Patek Philippe in that it was fully in-house and heralded the end of the manufacture’s dependence on Lemania-based chronograph movements. The Ref. 5170 was the first men’s watch to feature this iconic movement, followed by the perpetual calendar chronograph Ref. 5270 in the following year. Throughout the Calibre CH 29-535 PS is a beautiful mess of wheels, levers and bridges.

Building an in-house chronograph movement with modern features and better performance was a long time coming for the manufacturer. The Calibre CH 29-535 PS is a column wheel, lateral clutch system and thus offers an aesthetically-pleasing, architectural view through the case back. The Ref. 5170P is a lateral clutch, column wheel chronograph.

As one would expect, the finishing on the movement is exquisite with polished chamfers on all edges, black-polished column wheel cap, Côtes de Genève on the bridges, circular graining on the wheels, and numerous other finishes applied on parts visible or hidden. The Calibre CH 29-535 PS is one of Patek Philippe’s most aesthetically-pleasing movements with its stunning layout and flawless finishing.

Crafted in platinum and adorned with diamonds, the Ref. 5170P-001 is not going to be a watch for those seeking value. At an eye-watering price of USD96,392, Patek Philippe’s Ref. 5170 is one of the most expensive simple dress chronographs money can buy. The diamond set within the case band is a reminder that this is a platinum Patek Philippe timepiece, which in turn translates to a hefty premium that awaits potential clients.

Just a rung down the pricing ladder is the Vacheron Constantin Historiques Cornes de Vache 1955 in platinum, coming in at approximately USD70,000. Like the new Ref. 5170P, the Cornes de Vache is a bi-compax dress chronograph. But unlike the Patek, the Vacheron is executed in vintage-style and retains the old world charm of the watch that it is based on, the beloved Ref. 6087. Since its unveiling in 2015, the Cornes de Vache has received an overwhelmingly positive reaction, and it’s easy to understand why. The watch with its vintage dial design and absolutely crisp pump pushers evokes a strong sense of nostalgia. It continues on the charm offensive and takes no prisoners with those sensuous cow horn lugs (hence the name of the watch); the way it curves and tapers will melt even the hearts of cynics. If that isn’t enough, the Calibre 1142 which can be seen from the case back, offers another reason to love the watch. The Calibre 1142 is based on the Lemania Calibre 2310 but juiced up significantly in terms of construction, function and finish in order to earn the Hallmark of Geneva. Like the Calibre CH 29-535 PS, the Calibre 1142 is highly architectural and picturesque, though admittedly, we prefer the aesthetics of the former. Overall, we’d say that the Cornes de Vache is a complete package: a modern chronograph with infallible vintage-inspired design. In our eyes, it would be pure madness not to consider the Historiques Cornes de Vache 1955 over the Ref. 5170P-001, especially at USD26,000 less, that is unless the vintage look doesn’t appeal to oneself.

When speaking of high-end, manually-wound chronographs, one cannot do without mentioning the name of A. Lange & Söhne. In 1999, when high-end, in-house chronographs were virtually non-existent, a plucky young brand turned the world of watchmaking upside down by presenting exactly that: a high-end, in-house chronograph. You know how the story goes – that brand was A. Lange & Söhne, and that watch, the mighty Datograph. The Calibre L951.1 that powers the Datograph wasn’t just an elaborately constructed and finished column wheel/lateral clutch chronograph movement, it also featured a flyback function and an outsize date display. The movement was so revolutionary that even today, it remains the standard by which all high-end, manually-wound chronograph calibres are compared to. Admittedly, it’d be a little unfair to pit the Ref. 5170P against the Datograph which has a few extra functions built in (though believe it or not, the Datograph is more affordable than the Patek novelty). Instead, it’d be fairer to compare Patek’s flagship simple chronograph to the Datograph’s little brother, the 1815 Chronograph. The Calibre L951.1 remains a watch enthusiast favourite with its divine architecture and aesthetics. As the 1815 Chronograph uses the same chronograph mechanism as the Datograph, the view of the two case backs are identical. The Ref. 5170P-001 may not offer the best value for money but that does not take away from the fact that it is a good-looking timepiece. Its resplendent platinum case, blue-black gradient dial and diamond hour markers result in a look that isn’t just sleek, but also opulent. Some say that this is Patek Philippe giving the Ref. 5170 a final (decadent) hurrah before it is succeeded by a new model line. All we know is, the Ref. 5170P-001 has caught our attention and we like it. In spite its outspoken dial aesthetics, the Ref. 5170P strikes an elegant figure on the wrist.