There is no complication more convenient for a traveller – or a cosmopolite – to have on his/her watch than the travel time. With the Senator Cosmopolite, Glashütte Original takes it to the next level. First introduced in 2015 in red and white gold versions, the Saxon manufactory’s flagship travel watch is considered to be one of the most well-designed and functional among its peers. This year, Glashütte Original presents a sequel to this success story, with a desirable new case material and an even more minimalist design. Here, we bring you the details and our thoughts on the Senator Cosmopolite in stainless steel. The case of the latest Senator Cosmopolite is crafted in stainless steel where it was only available in gold previously. Lighter but harder than gold, stainless steel makes for a great material for travel watches. Imagine cramp airports and plane fuselage, security, baggage handling, unfamiliar surroundings, crowds – stainless steel is just more comfortable on the wrist and quite frankly, hurts less when it is inevitably scratched in your travels. As a bonus, it also happens to be less expensive than gold. But just because it is a ‘cheaper’ metal does not mean that quality is neglected – far from it. The stainless steel case features satin-brushed and brilliantly polished surfaces, with both finishes executed to perfection. One thing we do take issue with is its size. At 44 mm x 14 mm, the Senator Cosmopolite is huge. We’re talking about grand complication watches and grande sonneries at these dimensions. In our humble opinion, the Senator Cosmopolite could benefit from a 2 mm reduction in both directions. The case of the Senator Cosmopolite is attractively finished but its size means that those with smaller wrists will have to miss out on the watch.

All that said, the expansive diameter of the Senator Cosmopolite does lend itself to a superbly legible dial design, which is perhaps the greatest strength of the watch. Each of the six displays on the dial are extremely easy to read with just enough negative space in between for the dial to appear not just uncluttered, but clean. This latest interpretation of the Senator Cosmopolite is the most contemporary of the lot. This is achieved in part by the use of blue printed Arabic numerals and blue appliques – a more modern feel compared to the railroad-style minute track and Roman numerals used in the preceding white/red gold variants. Other notable changes include the lack of the Ab/Auf label on the power reserve indicator, the presence of the “HOME TIME” inscription just above the day/night indicator for home time, the simplification of the graphic for the local time day/night display at 9 o’clock, and the use of a simpler-looking seconds track instead of a traditional railroad-style track. All these changes contribute to the minimalist visage of the Senator Cosmopolite in stainless steel.

The displays on the dial are easy enough to understand, and so is setting them. That said, it does take some getting used to. The current home time can be set using the crown at 2 o’clock, like a regular watch. Turning the crown at 8 o’clock lets you set the city (displayed in International Air Transport Association – or IATA – code) corresponding to local Daylight Savings Time (DST) or Standard Time (STD). When travelling eastward, the traveller should then turn the crown at 4 o’clock clockwise until the IATA code for the destination time zone appears in the DST or STD window. The opposite should be done when travelling westward. In both cases, the central hour and minute hands (depicting the local time) shift forwards or backwards in 15-minute steps. This is because the Senator Cosmopolite doesn’t just include the 24 time zones that are offset by full hour intervals; it takes into account 8 further time zones that are offset by half-hour intervals and three more with three-quarter-hour offsets. These functions – plus the day/night displays for both home and local time, as well as the big date – make the Senator Cosmopolite one of the most functionally complete travel time watches in the market.

Overall, the Senator Cosmopolite has a dial design that is very pleasing to the eye. We like its modern blue-white-black colour palette and how strangely balanced it feels in spite of its asymmetry. The displays are highly legible and nicely spaced, both owing to the diameter of the watch and the thinness of the bezel. The watch, we feel, would be perfect, had it been at least 2 mm smaller, though we understand that that runs the risk of throwing the dial off-kilter. The dial is testimony that balance need not come from symmetry.

Powering the Senator Cosmopolite is the 63-jewel, in-house manufactured Calibre 89-02; this is the same movement used in the gold versions of the watch. The Calibre 89-02 is rather large at 39.2 mm x 8 mm – the size of a dress watch – which necessitates the watch’s beefy case. It boasts a tremendous power reserve of 72 hours in spite of being an automatic movement, and operates at a contemporary 4 Hz beat rate. The Calibre 89-02 as seen through the sapphire crystal case back.

True to its roots, the Calibre 89-02 has a three-quarter plate construction. Its surface is decorated with Glashütte striping while its edges are beveled and polished. Providing the movement energy is an off-centre, skeletonised rotor which features the brand’s GG logo and a 21K gold oscillation weight. Then of course there’s the double balance cock and swan neck regulator, engraved and polished, respectively. Suffice to say, the Calibre 89-02 is as aesthetically pleasing as it is functionally impressive. 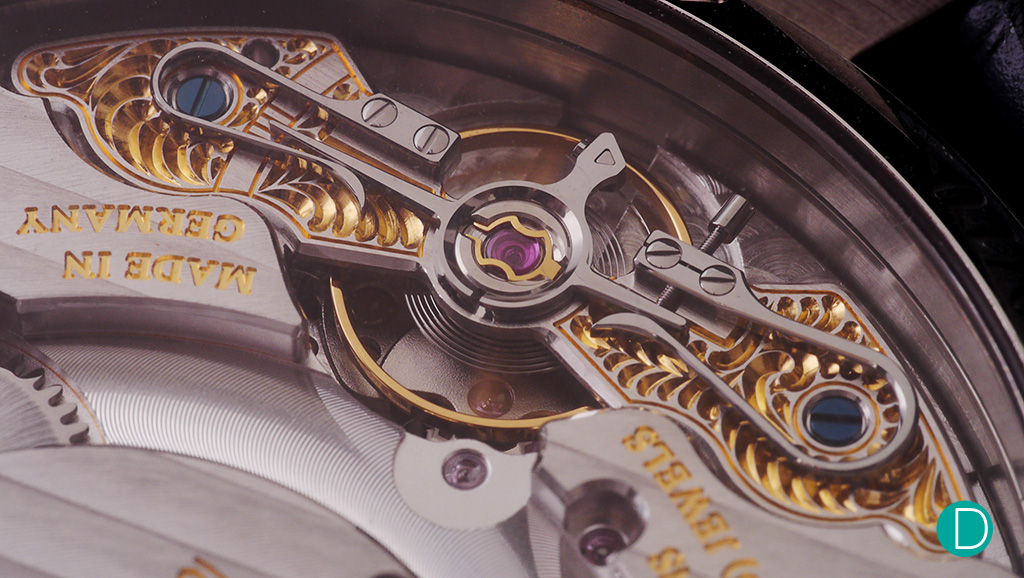 The Calibre 89-02 is beautifully finished with traditional Saxon techniques.

The market for travel time watches is crowded to say the least; almost every brand worth its salt has at least one in their catalogue. The Senator Cosmopolite distinguishes itself through its contemporary, minimalist design and the completeness of its functions. Introducing the watch in stainless steel opens the door to a broader audience, especially to the brand’s younger clients. At EUR20,700, the Senator Cosmopolite in stainless steel is pricey but is also significantly more accessible than its siblings in gold. To have a stainless steel option can only be a boon for the brand. Sure, it still comes with a high ransom, but what its eventual owners get in return is a high-functioning mechanical timepiece with beautiful aesthetics – in the luxury watch industry, that’s as good as it gets. Unsurprisingly, the Senator Cosmopolite has a big presence on the wrist. That said, the short, downturned lugs will aid with wearability. For a more simplified, bauhaus take on the travel time complication, there’s the Zürich Weltzeit by Nomos, who also happen to be part of the same neighbourhood in Glashütte. Using a disc, the home time is displayed in a 24-hour format. The pusher at 2 o’clock allows one to shuffle through the 24 time zones offset by an hour. Apart from the time and travel time, the watch has no other functions. Priced at USD6,100 or about SGD8,350, the Zürich Weltzeit obviously tackles a different end of the luxury watch market to the Lange 1 Time Zone or the Senator Cosmopolite. While its uber minimalist design is very appealing, the finishing standards of the Zürich Weltzeit is not on par with the Lange or the Glashütte Original. Machine finishing plays a significant role, but honestly, that’s okay for a watch priced at under SGD10,000. The Zürich Weltzeit makes it possible for collectors to enjoy both quality German watchmaking and the travel time complication without imploding one’s personal finance. In our books, that’s a very promising position to be in. The NOMOS Zürich Weltzeit Singapore is a special variation of the watch with salmon dial. Limited to only 35 pieces, the watch retails for SGD8,560, slightly more than the regular variants.

The Senator Cosmopolite in stainless steel has a lot going right for it. It’s got beauty, it’s got brains, and importantly, it’s more accessible than ever (relatively speaking). This can only be good for the brand, and in the bigger picture, the German watchmaking industry. For the longest of time, the Swiss watch industry has had a stranglehold on the market, and rightfully so. But it is refreshing to see Germany, in particular Saxony steadily claim their share of the pie, teaspoon by teaspoon. Watches like the Senator Cosmopolite is evidence that German watchmaking is thriving and will continue to thrive for the foreseeable future.