Do you remember what you were doing in 2010? 2010 – that’s over seven years ago. Seven years ago, the Burj Khalifa was officially opened; Spain had won the FIFA World Cup in South Africa; Nobel Peace Prize laureate Aung San Suu Kyi was released from her house arrest which began in 1989; and, for us watch enthusiasts, A. Lange & Söhne unveiled its first ever self-winding Lange 1 timepiece. This was surely not a decision taken lightly by the folks at Lange. One of the biggest selling points of a Lange 1 timepiece is the unparalleled beauty of its movements. Introducing a winding rotor would serve only to undermine that beauty UNLESS it is executed perfectly. Spoiler alert: it was. Here, we bring you the details and our thoughts on the A. Lange & Söhne Lange 1 Daymatic. The case of the Lange 1 Daymatic measures a contemporary 39.5 mm in diameter and 10.4 mm in thickness. With a generously domed bezel, the watch has no problem sliding under a tight sleeve. To further add to its wearability, the screw-in lugs curve downwards rather dramatically as they leave the case flank, allowing the watch to fit smaller wrists. As cliche as it sounds, the case is indeed “overbuilt” but don’t let that fool you into thinking that it is unrefined. Quite the contrary, the entirety of the case features a resplendent polished finish and is plenty nuanced as well. The top surface of the pusher is arced to trace the curvature of the case while the lugs are adorned with pronounced bevels that taper towards the end; it is attention to detail such as this that separates high horology from run-of-the-mill horology. The case of the Lange 1 Daymatic finds the perfect balance between masculinity and elegance.

Moving from the case to the visage of the watch, one is greeted instantly by the famed asymmetric design of the dial. The dial displays conform to the layout of the original Lange 1 in the sense that the centres of the seconds sub-dial, main dial and outsize date are at the corners of an imaginary isosceles triangle. Respecting the rule of the golden ratio ensures that the asymmetrical dial design is executed with harmony and balance. The key difference between the Lange 1 and the Lange 1 Daymatic is twofold: first, the power reserve display in the former has been replaced by a retrograde day indicator; and second, the entire dial layout of the latter is effectively a mirror image of the former. Indeed, some purists feel that the mirrored layout is an abomination that tarnishes the orignal Lange 1 design, but we think that’s an overreaction. It really isn’t such a big deal, especially when the philosophy of the design – golden ratio, no overlapping hands and displays – is respected. In fact, it even comes with a side benefit: to see the time, one now only has to pull back the sleeve ever so slightly, assuming the watch is worn on the left wrist. From a practical standpoint, the inverted dial design of the Lange 1 Daymatic (relative to the Lange 1) makes more sense. Yet, it wasn’t the original design. The design that was debuted along with the Lange 1 back in 1994 has been immortalised and continues to be idolised.

While the layout of the dial is modern, the aesthetics are purely classic. The gold Roman numerals, diamond-shaped markers, lancet hands and date window frame are delicately crafted, carefully polished, and perfectly placed on the solid silver dial. The two sub-dials, the main dial, and the date display sit on different planes, giving the watch a gratifying sense of depth. Furthermore, both the sub-dials feature fine concentric guilloché which forms a sunburst effect under incident light and is satisfying to view under a loupe. The bottom line is, the unique dial layout and the flawless aesthetics of the watch make for a potent, memorable combination from whence a modern classic is born. The crisp detail of every single dial element is to die for. They are simple yet brimming with synergy.

Ticking inside the Lange 1 Daymatic is the 426-part, 67-jewel Calibre L021.1. The in-house manufactured movement has a power reserve of 50 hours while operating at a stately 21,600 vibrations per hour beat rate. Keeping the power topped up is a full-sized 21k gold winding rotor with a platinum winding mass. Said winding mass ensures the largest possible moment of inertia so that winding occurs sufficiently even when worn by less active wearers. The use of minimal-friction bearing also ensures minimal waste of energy and improved winding efficiency. The proprietary balance wheel is equipped with eccentric poising weights and a house balance spring that is crafted to a tolerance of 100 nM. 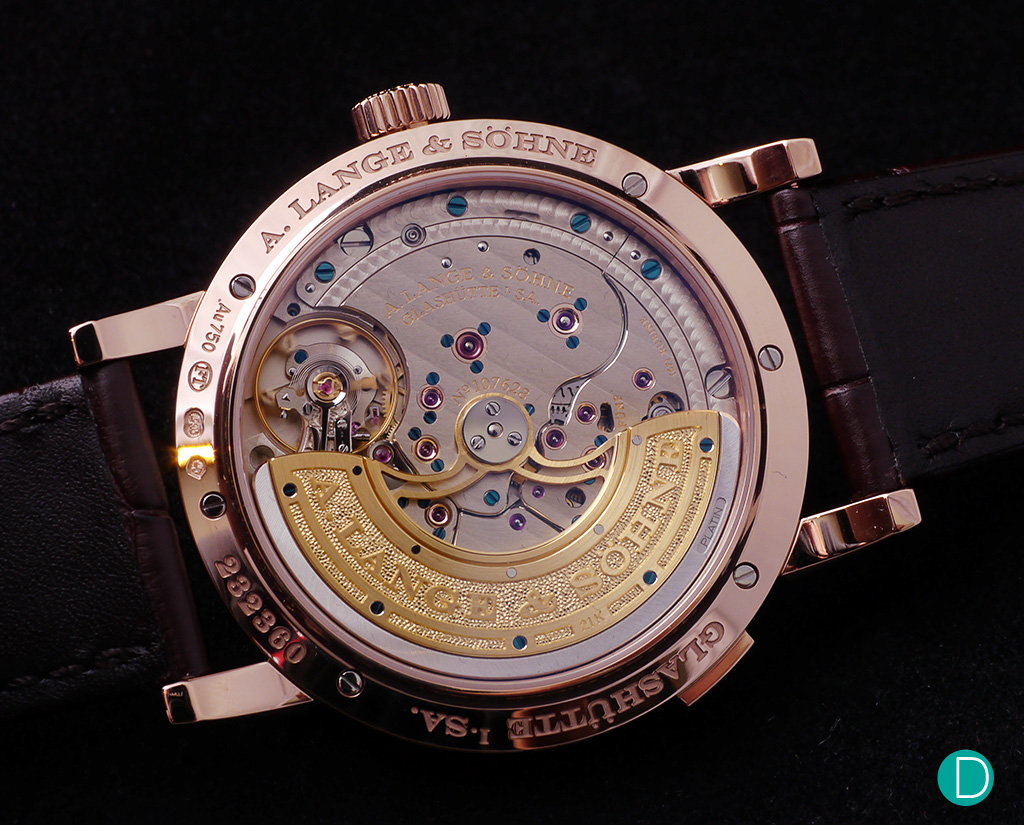 The Calibre L021.1 powers the first ever self-winding Lange 1 timepiece. Following in the footsteps of the Daymatic was the Lange 1 Tourbillon Perpetual Calendar, a different beast altogether.

While the Calibre L021.1 hasn’t got the quintessential Lange three-quarter plate architecture, it is still rendered in the brand’s favourite raw German silver, an alloy of copper, zinc, and nickel. The finissage and decoration on the Calibre L021.1 is recognisably Lange, that is to say that it is above and beyond the expectations of an haute horlogerie timepiece. The winding rotor, partially skeletonised to reveal more of the movement behind it, features a hammered surface with the manufacturer’s marquee relief engraved on it. The remaining unhammered surfaces of the rotor is finely brushed while the edges are bevelled and polished to add contrast. Central winding rotors are often considered an eyesore in most automatic movements. The one in the Calibre L021.1 doesn’t feel that way at all, testament to Lange’s careful consideration of its design and execution.

Of note also are the creamy Glashütte ribbing, screwed-down gold chatons, black-polished swan neck regulator and rotor cap, the festival of tight and even perlage around the circumference of the movement and the hand-engraved balance cock. It is a movement that gets even more gorgeous as the German silver patinas, as if it is not already gorgeous unaged. To hide a movement this organic and meticulously crafted from sight would be a monumental waste  – lucky for us, it is showcased through a sapphire crystal case back. Dare we say, this may be one of, if not the most beautiful full rotor automatic movement in the market. Lange movements never fail to gratify up close; the Calibre L021.1 is no exception.

The Lange 1 Daymatic in pink gold retails at SGD57,200. It doesn’t take a genius to know that that isn’t a small amount, so how does one justify such a price tag? Well, you can’t – until you stop judging it as an obsolete time-telling device and start viewing it as a luxury good. The Lange 1 Daymatic as a luxury watch doesn’t leverage off precious gem-setting or popularity (it is not that popular even amongst the brand’s other offerings) but instead, craftsmanship. Its value is derived from the exceptional number of man-hours and amount of skill expended by watchmakers and finniseurs to assemble and finish – by hand – each timepiece. The logical question that follows would then be: how does it compare to other watches of its kind? Pink gold aside, the Lange 1 Daymatic is also available in platinum and white gold (with a blue dial).

The Lange 1 Daymatic may be functionally different to the original Lange 1 but its design still stems from it. Comparing the two watches is virtually unavoidable given their likeness and lineage. Where the Lange 1 lacks in practicality, it gains in heritage. The fact that the Lange 1 was one of the four timepieces associated with the brand’s revival and that it has a movement with a traditional three-quarter plate architecture is enough to win the hearts of more sentimental clients. The lack of a central rotor means an unimpeded view of the movement, the aesthetics of which remains one of the biggest selling points of a Lange timepiece. The Lange 1 is also slightly more “affordable” at SGD47,200 for both yellow and pink gold variants. Assuming that the slight price difference isn’t an issue, the difficult task of deciding between the Lange 1 and its Daymatic sibling can be distilled into a single question: practicality of an automatic movement and a day indicator, or heritage? For those wishing to take a more familiar path, look no further from the Rolex Oyster Perpetual Day-Date. The Day-Date is arguably the most recognisable, most well-known timepiece with a day and date indicator. This of course has all to do with the Rolex branding and presence. That’s not a bad thing, because while it is aggressively marketed, it is still a watch packed with substance. While its movement, the in-house Caliber 3255, isn’t pretty to look at due to the lack of high finish, it is a feat of engineering with no less than 14 patents. It is a reliable workhorse with a 5-year warranty and is as precise as it gets (+2/-2 seconds a day). The variant photographed below is the flagship Rolex Day-Date 40 in platinum. Released in 2015, it does away with the iconic fluted bezel and comes with a full platinum President bracelet. Strictly speaking, it is not a dress watch but the Day-Date is as regal and dressy as a Rolex Oyster Perpetual gets. With an ice blue dial, the platinum Day-Date gives the impression of stealth wealth, though being Rolex-branded probably achieves the opposite effect. The platinum Rolex Day-Date 40 will wear heavier than almost any other watches in the market, yet its price is heavier still, at over SGD84,000. Unlike in the Lange where superlative finishing of the movement accounts for a significant portion of the final price, it is the sheer amount of precious platinum used in the Rolex that raises the price. It is important to note also that the premium of the platinum over the white gold variant of the Day-Date is a hefty SGD34,000, or three-quarters of a Lange 1. In the end, whether or not the Day-Date in platinum is actually worth its ransom is ultimately down to what one values in a timepiece. And no, there is no wrong answer. Rolex Day-Date 40 in Platinum Ref. 228206 – 83416. The flagship platinum model does away with the recognizable fluted bezel. The Lange 1 Daymatic cuts a sleek figure on the wrist. It is neither overpowering nor a shrinking violet.