The idea of owning a vintage diver’s watch has always appealed to us. We were probably influenced by two different set of events in the horological world over the last few years. The first one is the rise of vintage Rolex wristwatches, with the likes of Submariners and Seadwellers gaining a lot of interest amongst the collectors. Another contributing factor is the fact that many watch manufacturers are doing reissues of their vintage pieces, in which a number of them are diver’s watch.

The latter had probably left a lasting impression with us. Within the last five years or so, we have seen quite a substantial amount of well-made and well-designed vintage reissues from some of the watch manufacturers. Some of them are very well-priced too, which increases the appeal of such pieces. Well, let’s face it. Some of the vintage Rolexes are really nice, but the price point is not something that we would even want to think about. Hence, this drives the appeal of some vintage-inspired watches – which are still accessible to many collectors, including the new ones.

So, what are some of the pieces that have caught our eyes? Let us find out! The first watch that we have today is the HyperChrome Captain Cook from Rado, fresh from this year’s Baselworld.

The collection, interestingly, is a tad different from the brand’s usual offerings. Rado is very much known for its ceramic collection, and the HyperChrome Captain Cook slightly deviates from that a little. Based on the diver’s watch that they have produced in the 1960s, the timepiece is actually a good representation of watches from that era. This includes its design cues (the domed crystal, hands, and indices), and right down to the size of the watch (at a remarkable 37.3mm).

What we particularly like is how Rado had managed to marry modern techniques and materials with classic aesthetics. The ceramic bezel is a great touch – in which it retains the old-school look, and yet it is functional and robust. The ETA-based HyperChrome Captain Cook, in short, certainly ticks the right boxes. It is priced at S$2,530, and it will be limited to 1962 pieces.

In the recent years, Bronze seems to be the popular material amongst watch manufacturers. Popularised by Panerai’s legendary Bronzo, the material had certainly gained traction with its great looks and wonderful patina.

Oris is one of the manufacturers that had caught on with the trend, and the Carl Brashear Limited Edition certainly does justice to the material. Produced to honour the US Navy’s first African American Master Diver, the Carl Brashear Limited Edition also pays homage to the bronze deep-sea diving helmets that were used in the 1950s. It was also the first watch from Oris to use this material, and it certainly pairs beautifully with the deep blue dial.

The 42mm timepiece is powered by Calibre 733, a Sellita SW200-based movement. The automatic timepiece has a power reserve of around 38 hours, and it comes with a date indicator at the 6 o’clock position. It is retailing at CHF 2,600 (approximately S$3,585), with a limited production of just 2,000 pieces. This is a great looking watch, and it certainly gives the other competitors a run for their money. The Tudor Black Bay Bronze. This is the Bucherer Edition, which comes with a special blue dial, bezel, and fabric strap. Picture courtesy of Eddie Sng.

Since its debut in 2012, the Black Bay had become a must-have model for many collectors. Its handsome good-looks, coupled with a relatively affordable price point, makes it a highly desirable entry-level timepiece. The success of the collection had been so tremendous that over the last few years, Tudor had produce differing variants of the Black Bay. This includes the Black Bay Dark (PVD), Steel and Gold, and of course the Bronze. In recent times, they have also introduced the Black Bay with an in-house movement (MT5601). They have certainly made the Black Bay even tastier than before.

The 43mm timepiece is slightly larger than the regular Black Bays, but it still wears rather comfortable on the wrist. Retailing at CHF 3,800 (approximately S$5,240), the Black Bay Bronze is rather competitive in terms of the pricing. The watch also comes with two different straps: one in nylon, and the other an aged leather strap. It is, honestly, very difficult to find fault with the Black Bay Bronze, and we reckon that this will become a classic in time to come. 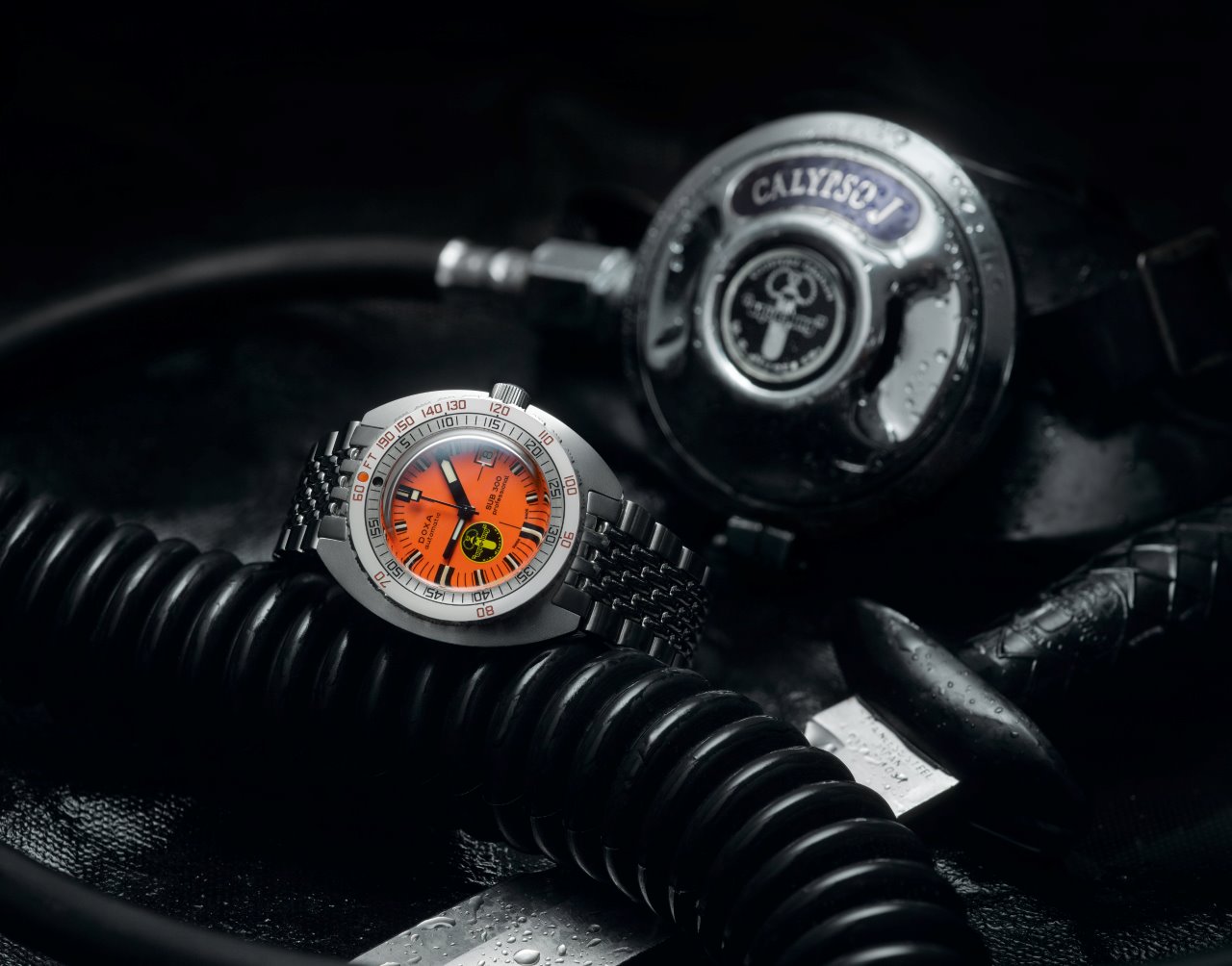 If one is looking for a diver’s watch that is rather uncommon and comes with an excellent provenance, then perhaps the DOXA Sub 300 might be something that you’d want to take a look at.

Launched a few months back, the DOXA Sub 300 Black Lung is now in its third generation of collaboration with the Cousteau family. What we particularly like about this watch is how DOXA had retained the watch’s vintage charms. This includes its “turtle-shaped” case, the bright orange dial, as well as the patented “No-Decompression” rotating bezel. Coupled with the classic looking “beads of rice” bracelet, the DOXA Sub 300 certainly exudes a hint of the yesteryear.

For many collectors, the likes of the Submariner or the Seamaster might be too ubiquitous. The DOXA Sub 300, in our opinion, offers something different. While its design is highly influenced by the 1960s, but it is definitely not passé. In fact, we think that it is really cool and special, and one can still easily pull it off in today’s age. The Black Lung edition is notably limited to 300 pieces, and they will come with a price tag of US$2,590 (approximately S$3,485). For those who likes watches from the 60s, wait no longer! The Heritage collection by Longines had constantly threw us surprises. Inspired by watches in their archives, the repertoire includes some of their finest and historically important creations, such as the Legend Diver, Lindbergh Hour Angle, and Avigation Big Eye.

We thought that another highly underrated timepiece from that collection is the Heritage Diver 1967 that was launched in Baselworld 2015. As its nomenclature suggests, the timepiece was originally conceived in 1967. Some interesting design cues of the 42mm watch includes the angled lugs, domed sapphire crystal, red bezel, and the asymmetrical sub-dials. The combination worked surprisingly well.

Powered by an ETA-based movement, the Heritage Diver 1967 boasts a power reserve of around 54 hours. The functions include a column wheel chronograph, as well as a date indicator at the 4:30 position. It is well-priced at S$4,770, and it is certainly a wonderful addition to any current watch collection. The 62MAS Reissue. One of the finest creations from Seiko, aside from its Grand Seiko/Credor range.

Finally, we have the Seiko Diver’s SLA017, also known as the 62MAS Reissue.

This watch is probably one of the pieces that many Seiko fans have been patiently waiting for. Based on the first Seiko diver’s watch, the SLA017 is certainly a wonderful and clean looking timepiece. The 39.9mm timepiece looks identical to its original version, with a clean and timeless design that had certainly stood the test of time. Interesting characteristics of the timepiece includes the domed sapphire crystal, case shape, as well as the design of the indices. Similarly, they give us a glimpse of the 1960s, and we are pleasantly surprised by how relevant these elements still look today.

The SLA017 is fitted with Seiko’s Caliber 8L35, which is seen on their high-end pieces such as the Marinemaster 300 and the Emperor Tuna series. It is often touted that this is the undecorated version of Grand Seiko’s 9S55. The self-winding watch features a decent power reserve of around 50 hours, and it comes with a date indicator at the 3 o’clock position. The recommended retail price for this piece is €3,800 (approximately S$6,085), and it is limited to 2,000 pieces. While its price might be slightly steeper than the usual entry-level pieces, but we reckon its finishing and quality makes up for the premium. This is certainly a must-have for any serious Seiko collectors!

In this week’s article, we have tried to keep the prices of our selections low. Most of them are below S$5,000, with the exception of both the Black Bay Bronze and the Seiko Diver’s SLA017. We feel that such price points will attract and appeal to a great range of collectors, especially since many of you are probably eyeing on one of such timepieces to reward yourself at the end of the year.

What we really like about our selection is that these watches are just perfect for many collectors. It combines classic aesthetics with modern technology, and hence allowing collectors to enjoy these watches without having to think about maintenance that plagued many vintage collectors. One example is the SLA017, in which its parts might be hard to come by as the original variant is rather rare to begin with. The purchase of the modern variant might have eradicated some of these issue, although we have known collectors who enjoy collecting vintage watches because they enjoy the challenge of finding and restoring their vintage watches. Of course, if you are also looking for exclusiveness, then perhaps the vintage watches might be more appealing as well.

Well, what are your thoughts on vintage reissues, as well as our selection today? Let us know in the comments section below!