A. Lange & Söhne is one of our favorite brands here at Deployant Central. Our love for the brand extends beyond the superlative products it is now famous for. We were the early cheerleaders for the brand, when the rest of the world were wondering about the former East German manufacture…way back in 1995/96. We are unabashed in our adoration for the culture surrounding the Saxon brand, the manufacture and most of all, the warm, generous and wonderful people who make the brand. To celebrate their 200th anniversary of their founder’s birth in 1815, they announced this 1815 200th Anniversary F. A. Lange as a tribute. A first edition was released in February 2015 in platinum. And this second edition in honey colored gold was released in Watches & Wonders 2015.

This is the story of the honey colored gold version recently released, which we had a full hands-on session in Hong Kong. The Lange 1815 200th Anniversary F.A. Lange in honey colored gold. The pin is in 18 k yellow gold, with a 15 year old patina. The pin is a piece unique, hand made by Master Engraver Helmut Wagner, and is made to resemble the crown of a Lange watch, and adorned with a diamond endstone used in Quality 1A Lange watches. The pin was presented by the late Günter Blümlein to the author in 1999.

Honey colored gold. A special gold. Is it sweet like the stuff from the bees? It is an interesting metal, and a rare innovation to the 18k gold family. The metal is developed by Lange in collaboration with a university, and was patented. Lange first used the metal in a watch with their 165 Years – Homage to F. A. Lange with three models: the Tourbograph  “Pour Le Mérite” (this watch was first released in platinum in 2005 in a limited edition of 51 pieces, and an additional 50 pieces in Honey coloured gold in 2010. This completes the 101 pieces announced for the Tourbograph in 2005.) , the Homage to F.A. Lange 1815 Moonphase and the Homage to F.A. Lange Lange 1 Tourbillon. The year was 2010, and the celebration of 165 years since the founding of the firm by F.A. Lange. The metal was not to be used again, until this year, in celebration of the 200th birth year of F.A. Lange. On the wrist, the 40mm feels perfect. Proportions are ideal. And the honey colored gold seem a nice complement to the rather tanned skin tone of the author.

The metal has a gorgeous hue, perhaps the description Honiggold, in German is appropriate. It does look and radiates (reflected light, of course) like honey. One can almost taste the sweetness.

In our eyes, it is a little more subdued in tone than 4N rose gold which is more romantic. The 4N rose gold is favored by Lange (pink gold in Lange-speak). Honey colored gold is perhaps more complementary to light skin tones than yellow gold. Some might argue that Asian skin might be closer in hue to yellow gold, but we think honey colored gold complements both yellowish Asian skin as well as whitish Caucasian skin, especially for tanned individuals.

The metal is also quite hard, measuring some 300 HVI on the Vickers Hardness Scale. Yellow gold being at about 160 HVI, and rose and white gold about 190 HVI. Interestingly, 950 platinum is rather soft in the hardness scale, measuring only 135 HVI.

The 1815 family (shown above up to circa 2014) has always been intended as a tribute to the firm’s founder. In the earliest days, although the 1815 was not part of the original collection at the brand’s relaunch in October 24, 1994, it featured strongly from 1995 onwards, with first collector sightings on-the-wrist from circa 1996.

Classical in design, featuring the trademark Arabic numerals, railway track for minute markers, the watch gained classic status immediately. It was aimed commercially at the Patek Philippe Calatrava series, in particular the very popular (then) ref.3919 with the signature hobnail bezel. And it showed the then new and little manufacture from Glashütte has some kick. The retail pricing for the 1815 in Jan 1997 was DM11,900 incl 15% German VAT (Singapore retail was S$9,200 at 3% GST then) in yellow gold, or white gold. And the Patek Philippe 3919 was just a few hundred S$ more.

The 1815 was deemed by many collectors as far superior to what the entry level from the Geneva maison. The original 1815, Ref. 206 had a 36mm case, and carried the L941 movement. The case design, the Teutonic heft, the dial layout and clarity, the movement design and finishing was way ahead of the class.

The 1815 was revised in 2009, and the case was brought up to 40mm diameter, and the movement also upgraded to the new L051. Another revision of case size was introduced in 2014, a reduction to 38.5mm. We carried the review story here. 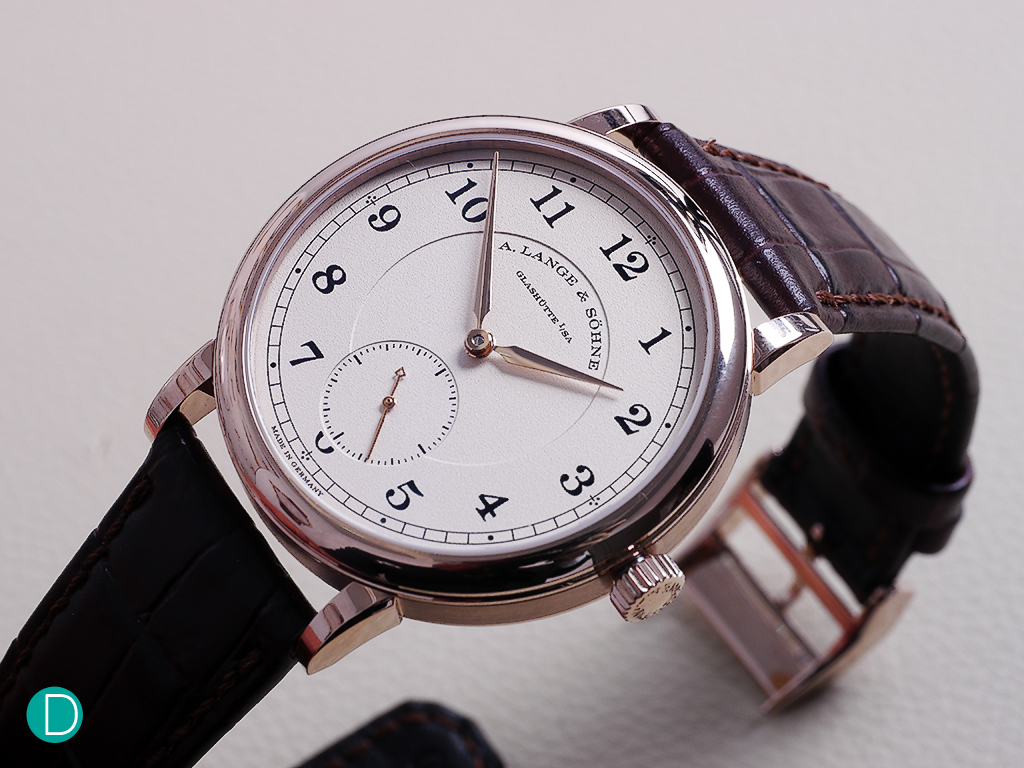 Forward to 2015, the 1815 200th Anniversary Honey Colored Gold is the second edition of the anniversary series. The first edition was released in February 2015 in a limited series of 200 pieces in a platinum case with a black dial. We ran a full hands-on review which can be discovered here.

And this second edition is released in a limited series of 200 pieces in the honey colored gold case and a special finely textured argenté-grainé dial. See the press release here. 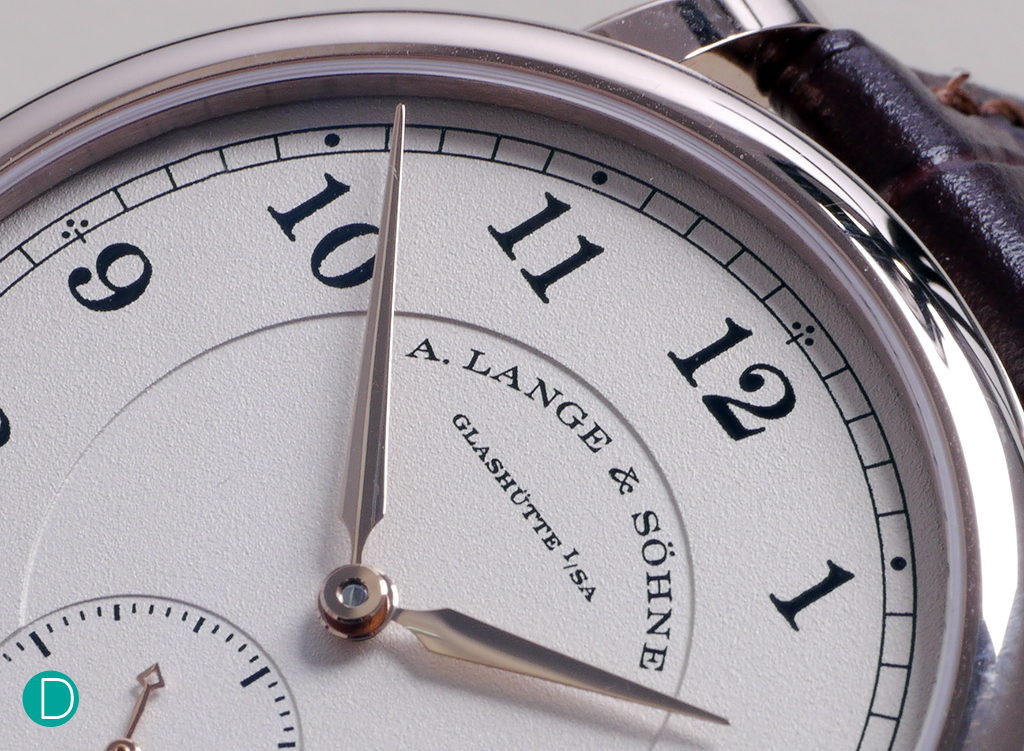 Dial detail of the 1815 200th Anniversary in honey colored gold.

The dial is rather special. The texture, reminiscent of an egg shell, yet the hue is not ecru, but silver.

On the flip side, the movement remains the gorgeous L051.1. 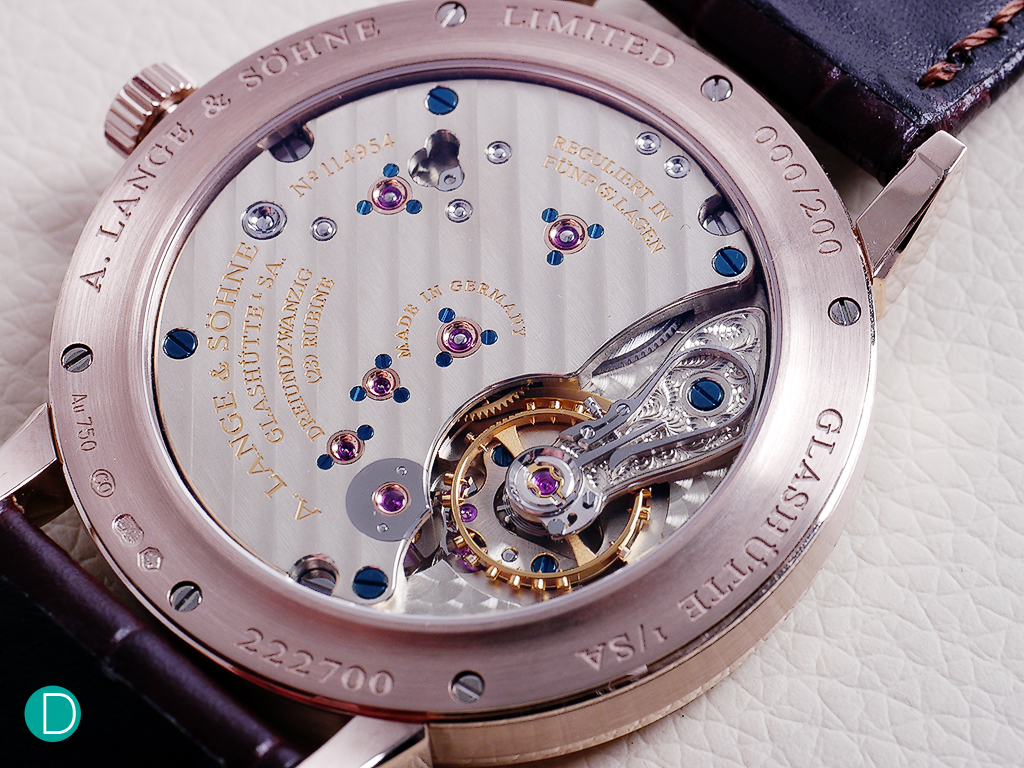 A wallpaper sized version of the photograph, measuring 1920 pixels x 1200 pixels is available for free download by clicking on the link at the end of this paragraph. By clicking on the link you agree to the condition that this download is for non-commercial, personal use only, and also agree not to modify it in any way.

A workhorse movement, the L051.1 is  manually wound, 188 parts, 23 jewels with a power reserve of 55 hours. As usual, it is immaculately finished, and extremely beautiful aesthetically. And still trouncing all the other three hand, series produced watches from the big Swiss maisons.

Today, the 1815 continues to lead in the entry level stakes. Though through the ensuing years, the entry level has increased.  The current honey coloured gold 1815 200th Anniversary is priced at S$48,300, in line with the price of first edition of the same which is a platinum case, released in February 2015.