TUDOR announces their “Born To Dare” Campaign with two partnerships. The first is a partnership joining forces with the number one team in world rugby, the All Blacks, leading player Beauden Barrett and with the upcoming 2017 DHL New Zealand Lions Series.  And another with David Beckham.

For the 2017 season, Tudor launches a new campaign called “Born To Dare”. The Tudor “Born To Dare” spirit is expressed in a campaign manifesto and supported globally by ambassadors whose life achievements directly result from a daring approach to life.

“We are devoted to the classic. But reject the status quo.
We keep the best of the past, the best watchmaking practices, the best designs.
And push the boundaries of what’s new.
Born for a purpose. Field-tested to the extreme.
For those who are up for anything.
For those who face their fears.
For those who reinvent themselves every day a TUDOR is born to dare.”

The NZ All Blacks are the most successful international rugby team of all time. And one of the legends of the sport. The All Blacks are named after the colour of their team kit. The famous All Blacks jersey is one of the most famous pieces of sports apparel and an icon of national pride. The silver fern emblem symbolises New Zealand. The players don’t see themselves as owners of the jersey, but as guardians. The team is currently led by Beauden Barrett, who wears No 10 jersey for the first five-eighth position. He is a proven player with his ability to cut through gaps in the opponent team’s defences and accelerate to score or to set up for his team to score. He was World Rugby Player of the Year for 2016.

The All Blacks and Beauden Barrett wear the Black Bay Dark, a great pick as it perfectly matches their team colours. The Tudor Black Bay Black…perfect fit for the NZ All Blacks Rugby Team.

As an extension of its commitment with the All Blacks, TUDOR is proud to be Official Sponsor of the DHL New Zealand Lions Series 2017.

The Lions Series occur once every four years. The best rugby players in England, Ireland, Scotland and Wales, combine to become the British and Irish Lions team and will compete with one of the Southern Hemisphere rugby nations.

For 2017, the team will be challenging the All Blacks. In a series of 10 matches in seven cities over five weeks, the Lions will take on a provincial Barbarians side, New Zealand’s five Super Rugby teams, the Māori All Blacks and finally the legendary All Blacks.

On June the 24th, the British and Irish Lions will meet the All Blacks in the first of their three Tests at Eden Park, Auckland’s legendary rugby stadium, and face their mighty haka. They will be 18,000 km from home, supported by their 20,000-strong army of supporters, but will not only be facing the All Blacks but also the 4.5 million residents in the rugby-worshiping nation of New Zealand.

David Beckham perhaps need no introduction. He is multi-faceted and enjoys the final things of life.

“Especially as an Englishman I think you really appreciate a nice suit and a nice watch. They go very well together” he says.

A long-time wristwatch lover, he came to know Tudor through its sibling brand, Rolex, of which he owns several timepieces. We have featured Beckham in our Spot the Watch section. Click on link for details.

For the campaign, David Beckham wears the Black Bay S&G and the Black Bay Chrono, both new watches introduced in Baselworld 2017. 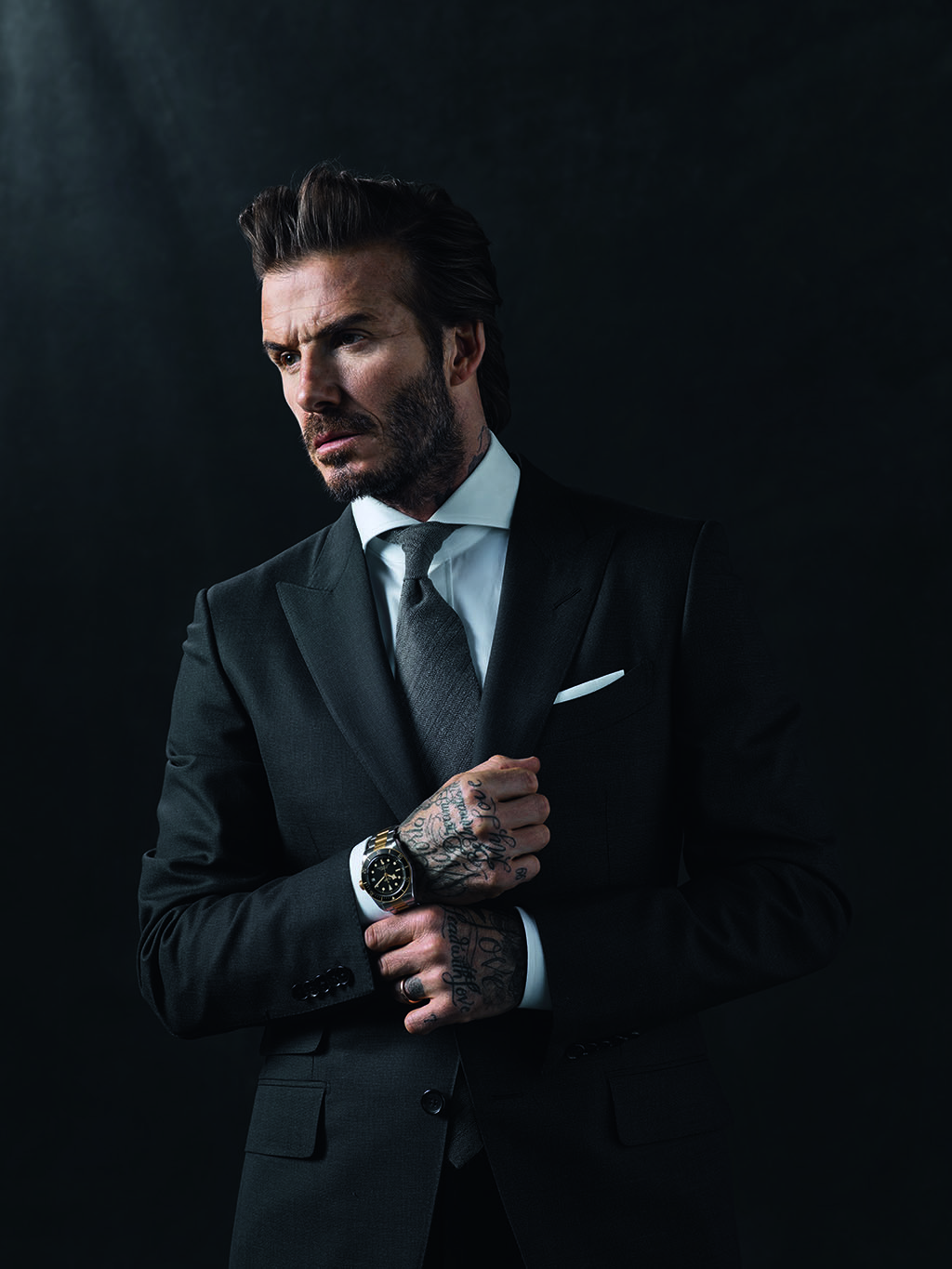 The Tudor Born To Dare Manifesto

1. PRODUCT PHILOSOPHY
“We are devoted to the classic. But reject the status quo.”
Born from the will to go beyond the standards, Tudor’s watchmaking philosophy draws its inspiration from its heritage, while incorporating state-of-the-art technology, exclusive innovations and pioneering creativity.
Created by the founder of Rolex, Hans Wilsdorf, the Tudor Watch Company was born with a mission to explore new territories, offering “a watch that (his) agents could sell at a more modest price than (his) Rolex watches, and yet could attain (its) standards of dependability”.
The Tudor of today has not drifted away from the original vision. While strictly adhering to the fundamentals of excellence, the design of a Tudor watch reinterprets a rich history to create something truly unique – a bold fusion of the original and the contemporary in an unrivalled proposition.
A Tudor watch is born to dare.

2. PRODUCT FEATURES
“We keep the best of the past, the best watchmaking practices, the best
designs. And push the boundaries of what’s new.”
Tudor’s reinvention of the classics has kept their watches distinctive for more than half a century. Never afraid to redefine the rules, Tudor’s new watches are strongly connected to the past while incorporating 21st-century technology. They also never shy away from pushing the boundaries of what’s new, experimenting with unusual materials, combinations and inspirations.
Consider when Tudor decided to revisit their diver’s watch history. They drew inspiration from the past while embracing modernity. The Tudor Black Bay has direct antecedents in some of the most iconic Tudor watches. The 1958 Oyster Prince Submariner reference 7924 contributed its oversized crown and general lines while the ‘Snowflake’ Tudor Submariner, worn by the French Navy in the 1970s, offered up its unique angular hands. Classic designs, contemporised for a new century.
The Black Bay Bronze incorporates a golden-toned marine-grade aluminium bronze case specifically chosen for its proven durability in marine environments. That this alloy develops a unique patina overtime while paying tribute to Tudor’s long-standing relationship with the French Navy is a bonus.
But design is nothing without performance. Indeed, the Black Bay incorporates a supremely robust Manufacture calibre that took the Tudor R&D team 5 years to develop. Boasting a generous 70-hour power reserve, exceptional ergonomics and independently-certified precision, it sets higher standards. Tudor standards.
A Tudor watch is born to raise standards

3. WORLD OF THE WATCH
“Born for a purpose. Field-tested to the extreme.”
A Tudor watch is built for those who dare to step out of their comfort zone.
It is designed to perform in all and every condition. From a refined evening out to the most extreme environments imaginable.
Over the years, Tudor watches have been put at test on a daily basis strapped on the wrist of the most daring individuals, on land racing through rough Alpine roads, on ice accompanying the British North Greenland Expedition, in the air issued to the para rescue teams of the US Air Force and underwater with the frogmen of the French Navy. They never deceived them, constantly delivering robust and reliable time-keeping.
Today, from pure purpose-built tool watches to timeless elegant dress watches, the Tudor collection perpetuates that spirit of supreme dependability, having every single watch undergo a strict and demanding testing protocol guaranteeing precision, waterproofness and robustness, beyond industry standards.
A Tudor watch is born to go above and beyond.

4. THE TUDOR WEARER
“For those who are up for anything. For those who face their fears. For those who reinvent themselves every day … a Tudor is born to dare.”
The wearers of a Tudor today are not so very different to those of the past. They are people with unconventional attitudes. People with ambition. People who are willing to pursue their passions – no matter where they take them. Like Tudor, they believe in learning from and building on past experiences to inform how they think and behave today.
Tudor wearers seek to find experiences that expand their world view. They appreciate exceptional craftsmanship and sense. They are as interested in how something is made as they are in what it is intended to do. They insist on owning the best tools for the job and pride themselves on being in the know.
Those who wear a Tudor share a thirst for discovery. A spirit of adventure. And the will to go further. They are curious. They are fearless.
They are born to dare.