Patek Philippe extends its family of pilot-style watches with the new Ref. 7234G-001 Calatrava Pilot Travel Time, rounding up the watch family which is inspired by the manufacture’s aviator’s watches from the 1930s.

Commentary and review on the Patek Philippe Calatrava Pilot Travel Time Ref. 5524G at launch in 2015

The Calatrava Pilot Travel Time was one of the much maligned Patek Philippe watches since its introduction in Baselworld 2015. Many industry critics call it a ugly, and a copy cat. We wrote then – “The Patek Philippe Pilot is arguably the most controversial timepiece we have seen at Basel. From pictures, many have gasped at how audacious the design is. Comments like ‘this is not a Patek Philippe’ came ringing through the waves. Indeed, this is highly unlike anything we have ever seen from Patek Philippe’s modern collection. But then again, in the 1970s when the Nautilus was first launched, wasn’t it shocking and shunned as well?” Our own feelings about the Calatrava Pilot Travel Time were perhaps more measured. While we found it to be a bit of an oddball in 2015, we did not despise it, and over the course of time, actually grew to love it. 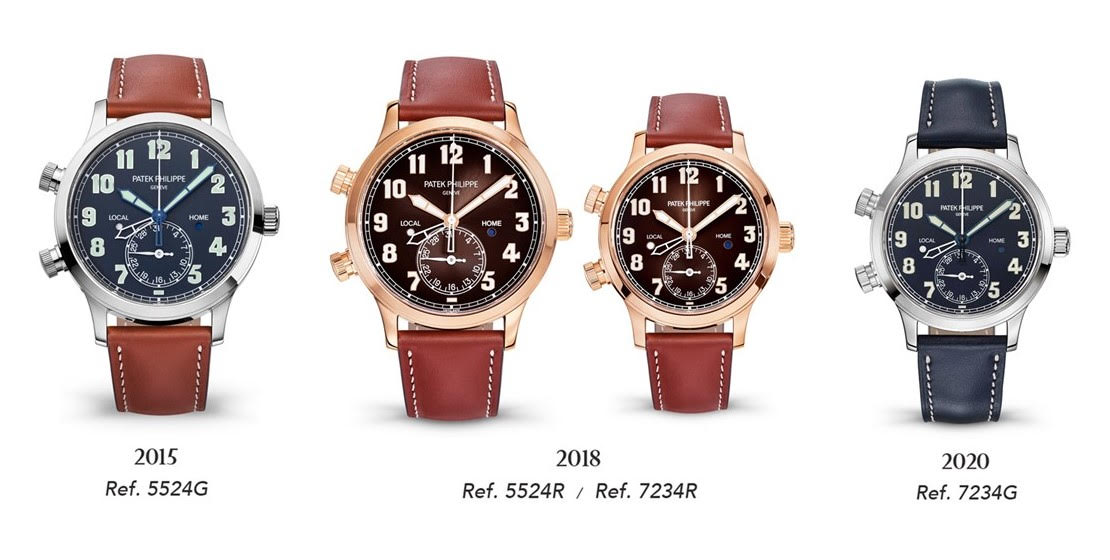 We were also told, not long ago, that sales of the Calatrava Pilot Travel Time was beyond expectations, and it still is one of the highly sought after Patek watches in precious metal.

The case remained the same beautifully sculptured case, with the regular crown at 3 o’clock and pushers to adjust the local time forwards and backwards by one hour steps at 10 o’clock and 8 o’clock. What was the redicule of critics at the 2015 launch is now a desirable feature, making the travel function very easy to operate. And perhaps with the passage of time, we have also come to accept the look, and grown to love it. The dial is a beautiful dark blue, varnished dial. The larger Ref. 5524G  also had a blue dial. Both watches share the same design and layout with the same high legibility and clear layout of the travel time. This is an intuitive and easy way to keep track of two timezones simultaneously, including day/night in both home and local time.

The aviator-style dial is enhanced with applied numerals in white gold with infilled luminous coating and luminous hands in blued white gold. The whit gold hour hand for home time is white lacquered. The very large arabic numerals, many critics claim to be a copy of Zenith Pilot are superbly legible. But they are wrong. Patek had not just copied a modern watch’s dial, but it’s use of this font traces back to the aviator’s watches they made in the 1930s. We saw a special version of this watch in a light blue dial launched at the Grand Art Exhibition in Singapore last year, which Patek called a “Ladies” watch. For the latest 2020 edition of the Ref. 7234G, Patek simply calls it a smaller case size. And it would fit the wrists of many gentlemen as well as the ladies as well. The self-winding movement has 35-45 hours of power reserve and operates at a modern 4 Hz beat rate. Equipped with Patek Philippe’s proprietary Gyromax balance and Spiromax spring, the movement is reliable with a rate accuracy tolerance of no more than -3/+2 seconds per day.

Finishing and decoration of the movement is upheld to the highest of standards, which again is not something commonly seen in this genre of watches, but de rigeur for Patek Philippe. Gorgeous Geneva waves can be seen across the bridges, with polished anglage on the edges. The winding rotor is adorned with circular waves and engraved with a Calatrava cross. In other words, just another day in the office for Patek Philippe.

The Competitive Landscape is an interesting one to explore. Most of the pilot watches are not designed to be dressy at the same time, and many offer functionality required for a pilot watch, but perhaps not much else. We cannot think of a luxury Pilot’s watch design for easy use in travel. At S$63, 900, the Ref. 7234 is rather competitively priced. Perhaps the Vacheron Constantin Overseas World Time might be the closest competitor. The VC has a similar heritage, and tradition, and the Overseas family is certainly one which is very capable. Though the Overseas does suffer from a busy dial layout as it is a World Timer, offering the entire world’s time at a glance instead of just a two timezones. The VC Overseas World Time is only available in a stainless steel case, but with a SS bracelet, and a crocodile strap and a rubber strap for S$ 56,900, not far from the asking price of the Patek which is S$63,900 for a white gold watch.

From the Rolex we have the GMT, which is an icon in the dual timezone game at S$12,430 in steel or S$51,480 in Everose case and bracelet. A very functional travel watch, originally designed for the pilots of PanAm airlines. And we get none of the refinement afforded by Patek. We can also consider, in the same pilot tool watch category, the various Breitling aviation watches. Pick one, say the Breitling GMT(S$11,750) and they too are more functional than luxury, though it includes a chronograph, which may be a useful feature in a Pilot’s watch. It also includes a slide rule on the dial for calculations, but makes the dial very busy, and not as intuitive to use. Others might be the IWC Pilot’s Watch Family, are also functional.

On the wrist, the 37.5mm case diameter of the Calatrava Pilot Travel Time wears its size, and is a perfect fit for most male and even female wrists. Though on my own wrist, my preference is for the larger 42mm case. Overall, the Patek Philippe Calatrava Pilot Travel Time Ref. 7234G is an excellent expression of its name – holding true to each element of the christening true. It is an exceptional Pilot watch, as the dial layout is clean, clear, and highly legible. It is a superb travel watch because it makes use of its functionality to show both timezones with clarity and in a very intuitive, easy to use way to adjust and set. And finally, it adds the element of je ne sais quoi  that comes with the mystique of the Patek Philippe branding and the Calatrava name. But in a more explainable way, it adds a truckload of luxury to the genre.

At S$63,900 inclusive of GST in Singapore, it is certainly not pocket change…for most of us anyway, but as a Patek Philippe, it is not an expensive proposition either, as shown in the watches compared in the Competitive Landscape.

This entire series was shot with the Leica M10-R with an ELPRO52 attached to the Summarit-M 50mm f/1.4. It began as a challenge to use a rangefinder camera to do macro photography, and was initially thought to be too difficult a task to accomplish. However, the Live View feature on the M10-R is quite superb, and aided by focus peaking, nailing focus was easy. You can judge for yourself how the image quality of the photographs are.

As a precaution, I shot the entire series with both the Leica as well as with a Canon EOS R6 with EF 100mm f/2.8L Macro lens, and the Leica photographs were good enough, that all the photographs (including the wallpaper dial photograph) you see here are shot with it, the only exception being the wrist shot.

Reviews of both the Leica M10-R and the Canon EOS R5 and R6 are coming soon.