Several weeks ago, I reviewed the Panasonic LUMIX S1R, and made some comparisons to its L Alliance cousin – the venerable Leica SL2. The S1R is an outstanding photography tool, and as I mentioned in the review, ticks the boxes in so many places.  Here are a selection of some of the photographs made with the LUMIX S1R and various lenses.

Review of the Panasonic S1R and lenses.

Photographs from the Panasonic LUMIX S1R and lenses The mainstay of our photography discussion is, of course, to shoot watches. Be they macro, or lifestyle shoots, the camera needs to be able to reveal the detailing lavished on the watches so as to evoke an emotion on the viewer, hopefully to desire to want the watch. I used the S1R almost exclusively for watch shoots during the duration of the loan, and photographed the following reviews with it:

Panerai Pop Up store at ION Orchard, which included some lifestyle shots, and some interior photography.

In the photograph below, the camera exposed the shot at f/6.3 at ISO200, to drag the shutter to 1/8s. The Panerai sales staff who was moving to the right of the scene is captured as a blur, creating a human element to the interior shot. The clock in the background is projected onto the black wall. Skin tones are rendered very nicely on the S1R. I managed to attend a demonstration shoot with professional models posing in a wedding setting. The following photographs are taken in natural light, in the shade, after a downpour. This next shot was taken as a mix of flash and natural lighting. A large skylight directly overhead allowed a generous amount natural light into the scene, and two flashes were used – one from behind the models, pointing to the rear of their heads creating a rim light for the hair, and one as a fill light just slightly camera left. S-PRO 50mm at f/4.5, 1/125s, ISO400. The following images are of my friend Bobby Tonelli. The first shows the dynamic range from the S1R sensor. On the right, the image was as shot. Metering was on the green “EXIT” sign in the background. As a result, Bobby’s face is dark, But in a very quick and dirty post process adjustment of only the exposure slider, it was easy to recover the details and colour on the face.

In this next image, I exposed correctly with the S-PRO 50/1.4 at wide open aperture. The subject isolation is superb, with Bobby in sharp focus, while the background is a dreamy, blurry bokeh. I also took a commissioned photoshoot from a French themed grocery store in Singapore – La Petite Boutique, and did the shoot with the S1R. Here are a selection of the photographs:

A look of the shop. The layout is a narrow, long shophouse, with racks along both walls. The LUMIX S-PRO 16-35mm lens was selected and shot at 16mm to give the impression of a wider room. Shot in AE mode at f/4, the dim interior required a 1/8s exposure, but with the IBIS on the S1R, the shot was sharp hand held. Note the lady in the rear of the shot is motion blurred, as she was moving during the exposure. Also note the balance of the blue sun light from outside. I was on the inside looking outward into the street at the far end, in contrast to the warm incandescent hue of the lighting nearer to me. I think the S1R handled the mixed light situation quite well. A three quarter shot of meats laid out on a table top is a rather standard food photography image. Here the colours are quite beautifully reproduced. Taken with strobe lighting with the Sigma 70mm F2.8 DG MACRO Art, at f/5, 1/200s at ISO 100. Next a lifestyle type shot – Tête de Moine with girolle – a type of cheese manufactured in Switzerland. It was invented and initially produced more than eight centuries ago by the monks of the abbey of Bellelay in the French-speaking area of the Canton of Bern.

Traditionally, the cheese is prepared for eating in an unusual way: the cheese is carefully scraped with a knife to produce thin shavings, which is said to help develop the odour and flavour by allowing oxygen to reach more of the surface. I shot this with the S1R and the Sigma Art 70mm Macro, at f/3.2, 1/200s, ISO50. The S1R’s highest sync speed is 1/200s, which is considerably faster than most other focal plane shutter cameras, which typically tops out at 1/125s. This is useful for outdoor flash photography or when mixing sunlight with flash in bright indoors situations.

The high ISO performance of the S1R is excellent, and lends itself easily to night photography. It is particularly useful that the superb IBIS allows hand-held shots to be made with ease.

This Singapore CBD shot was taken hand held at ISO3200, f/5.6 at 1/6s. Even pixel peeping at 100% or more, noise at this very high ISO is negligible, and can be safely ignored for small prints and web usage. At larger print sizes, I would probably be more careful. But when properly exposed and handled correctly, the images above ISO3200 may still be usable. Here, the image was taken at dusk outside ION Orchard, capturing the mood and the colours present due to the neon lighting from the building. On the left pillar, what looks like chroma noise is actually from the reflections of the multi colour LED lights inside the building. The next two images were taken on Singapore National Day, August 9, and shows how the same scene can be exposed in two different ways to create two different moods.

The first a low key, dark mood is expressed by exposing for the interior of the apartments across the road from me. Photographed at f/2.8 1/13s, ISO 1600., hand held, with the S Pro 70-200 at 200mm. Noise well controlled, and image is sharp, again showing off the excellent IBIS to control hand shake, even at the long telephoto end. The same building, but metered differently, creates a brighter shot. This was shot at 0.6s hand held, also hand held. S1R + S Pro 70-200 at 200mm, ISO1600. Image is still very sharp, with good integrity of the colour and details. The exposure is so long that some of the people on the balcony are blurred because they moved, but the balcony and structure of the building remained sharp. Pretty impressive IBIS. As a walkabout camera

Something that I almost never do, but I chanced on a group of boys skating. He had some friends with him, and one of them had a video camera, skating and following the action. Looked like a MFT camera with a proper cage.

I shot this with the S1R + Sigma 24-70, at approx 70mm, f/5.6, 1/80s, ISO 800. Focus tracking enabled, but not face or body detection. I liked the skin tones on this. There is no camera shake, as evidenced by his right hand, and the skateboard, but his head, legs and left hand show motion blur as he was moving very fast. Walkingabout at dinner time, I took this image of a restaurant. I like the colours of this shot. Shot with the S1R and S Pro 16-35. f/8 0.3s, ISO 1600 (Auto) hand held. At 16mm, the wide angle distortion of the lens was used to exaggerate the depth of the restaurant, from the greeter at the foreground to the interior, seemingly inviting one into the premises. If I had been a more practiced street shooter, I would have waited for the moment for him to look into my direction as I took the shot. 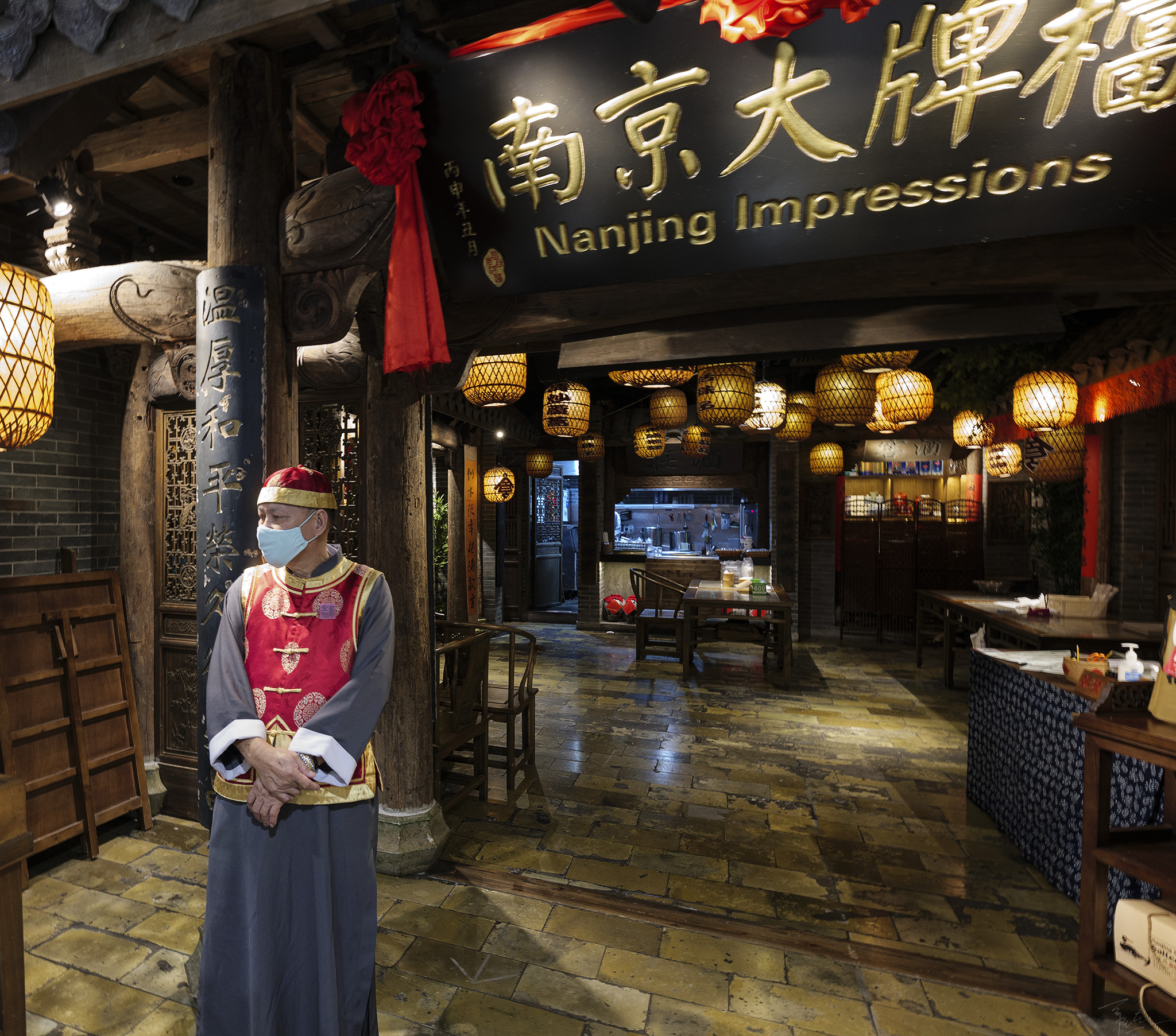 I spent about 3 weeks with the S1R and various lenses – from native LUMIX S-PRO lenses, to the other members of the L Alliance, including Leica SL lenses and Sigma Art lenses. This is a superb full frame system, with excellent resolution and colour rendition of images. All the lenses are excellent, though in terms of all out performance, the Leica SL lenses have the slight edge. The general pecking order being the Leica SL, then S-PRO, and the Sigma Art following very closely behind. Perhaps the only exception is when comparing the S-PRO 50mm/f/1.4 to the Summilux-SL 50mm. With both with maximum aperture of f/1.4, I found the LUMIX to be ever so slightly sharper at wide open, giving up the advantage and both lenses performing essentially equal once stopped down beyond f/2.

In combination with its native LUMIX lenses, or with the Leica SL brethren, or the superb Sigma Art lenses, the S1R is a superb camera capable of incredible image quality. But especially so when used in combination with the Sigma Art lenses, which are much more aggressively priced than either LUMIX S-PRO or Leica glass, it becomes is a  best choice for a “budget” full frame digital camera.