Ladies are becoming more and more interested in high end mechanical pieces, but yet, as they say in the song, “Diamonds are a girl’s best friend” (from the stage musical “Gentlemen Prefer Blondes” (1949), which was written by Jule Styne and Leo Robin. based on a novel by Anita Loos. This dichotomy is not lost on the haute horlogerie manufactures. Many are beginning to cater to the sophisticated tastes of ladies who demand both. Tonight, we feature a Ladies Special: the Roger Dubuis Excalibur Brocéliande.

A gem of a watch, or a watch with gems?

’Tis but thy name that is my enemy;
Thou art thyself though, not a Montague.
What’s Montague? it is nor hand, nor foot,
Nor arm, nor face, nor any other part 45
Belonging to a man. O! be some other name:
What’s in a name? that which we call a rose
By any other name would smell as sweet;

The Bard expresses himself perfectly, as only he could. But what’s in the name Brocéliande? 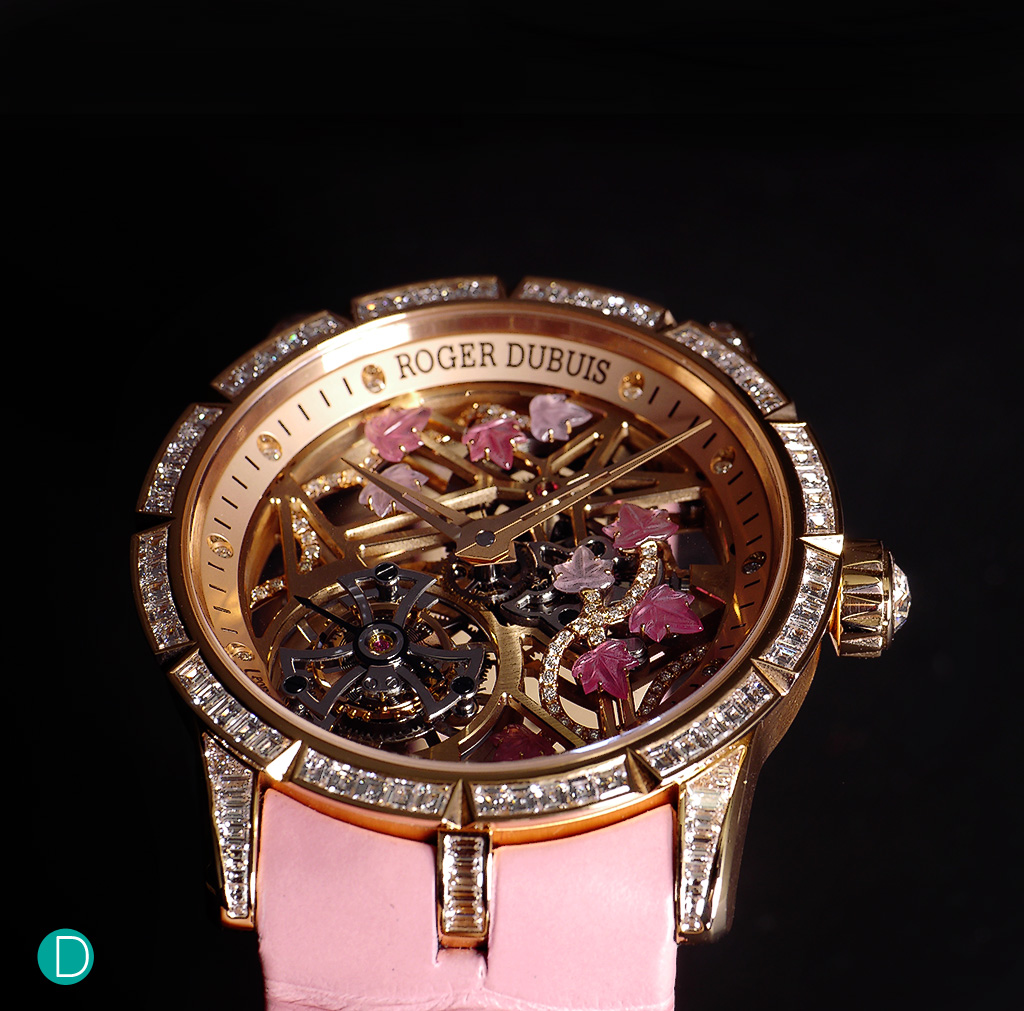 Brocéliande is the name of a legendary forest in France that first appears in literature in 1160, in the Roman de Rou, a verse chronicle written by Wace. It is a notable place of legend because of its uncertain location, unusual weather, and its ties with Arthurian Romance, most notably a magical fountain and the tomb of the legendary figure Merlin. This hint of magic in its name is the inspiration for the Roger Dubuis watch. The drawing specifications for the Roger Dubuis Excalibur Brocéliande.

The watch is perhaps a part of the series which Roger Dubuis started in 2013, where the theme for their SIHH booth was centered around King Arthur and showcased the Excalibur line. The Roger Dubuis booth in SIHH 2013, where the Excalibur series was introduced. The theme of the booth was an enchanted forest, like the Brocéliande, with a giant eagle and wizards wandering around.

We rekon this is Roger Dubuis’ feminine take on the Excalibur Tourbillon, which is a very strong, technical piece. We review the rather more masculine Excalibur Tourbillon here in 2014, and at another bejeweled interpretation of the more complicated Excalibur Double Tourbillon at Watches & Wonders 2015 here. The Star of Infinity had its share of diamonds, but it was perhaps decidedly masculine, and the Brocéliande seen here perhaps more feminine. The movement  is the very technical RD505SQ flying tourbillon skeleton movement. The hand wound movement features a beautiful polished stylized tourbillon. It makes one revolution a minute and beats at 21,600 bph for a power reserve of 60 hours. The skeletonization work is quite nicely done, and is a particular speciality of Roger Dubuis. The RD505SQ skeletonized movement with a tourbillon escapement.

Movement finishing is de rigeur, well done, but not too heavily embelished. All the traditional finnisage points are addressed, but the movement finish lack the heavy decorative finishes found in some other watches. The movement is awarded the prestigious Poinçon de Geneve.

But for us, the beauty is in on the dial side. The 18k pink gold case has a bezel set with a double rank of brilliant cut diamonds, and a rose cut diamond is set on the crown. Total weight of diamonds is 3.44 carats. The intertwined skeletonized bridges, the foliage  in semi-precious gems in autumn colors and the interplay with diamonds on gold strings are magnificent. We think this is a truly beautiful ladies watch which combines the technical virtuosity of a skeletonized flying tourbillon movement with a delicate, gemset dial which radiates. We don’t have any ladies in our Deployant offices, but given our masculine sensitivities, we figure this floral depiction might be quite intriguing. We ask our lady readers to please chime in. Please also give us your comments if you’d like to see Ladies Special as a regular column.