The small independent called Akrivia has been the darling of the haute horlogerie collector inner circle for a while. A secret, only shared among the insiders, the tiny manufacture has grown purely from the strength of the owner and founder Rexhep Rexhepi. We have been in close contact with Rexhep for a few years now, and have always been impressed by his passion for watchmaking. And his astute sense of tradition, aesthetics and the resolve to make beautiful watches. We caught up with him again recently in Singapore, and chatted about his life and work.

As mentioned, we are quite familiar with the works of Rexhep Rexhepi, having reviewed several of his watches. As a background, please read: Photo note: Inspiration for this photograph came from a series of portraits made by Martin Schoeller.

Let us begin at the beginning. From a young age, Rexhep has been fascinated and passionate about watchmaking. When the opportunity came for him to join his father in Geneva, he left his native Kosovo in 1998 at just 11. At 15, he joined Patek Philippe as an apprentice, and became a professional watchmaker soon after. He then moved to BNB Concept in 2007, a high-concept movement thinktank founded by three watchmakers, also formerly from Patek Philippe. He was entrusted with managing the atelier within a year of joining the company. During this time, BNB Concept supplied innovative and complicated movements to a number of well-known watch brands. He then moved to FP Journe and was responsible for assembling complicated watches.

Rexhep, photographed December 2018. On his wrist is the prototype of the Chronomètre Contemporain in stainless steel. We reviewed this prototype here.

In 2012, at the ripe old age of 25, he left Journe, and started out on his own by founding Akrivia. Akrivia is Greek for “precision”, a concept which he is fascinated with since he was a child. The AK-06, the first Akrivia not to feature a tourbillon. Here Rexhep takes a different approach by showing the guts of the power reserve indicator on the dial side.

He started out to prove that he can do the complicated. And he set out early in the establishment years to prove to the world that he is capable and to announce that he has arrived. So the first works he did under the brand name Akrivia was indeed very complicated. He debuted Akrivia with the Tourbillon Monopusher Chronograph AK-01 in 2013, a year after the founding. Then, on in rapid succession, a flurry of new calibers, from the Tourbillon Hour Minute AK-02 and the Tourbillon Chiming Jump-Hour AK-03 both in 2014, the Tourbillon Regulator AK-04 in 2015. The second collection from Akrivia then ensued, also in equal speed of one new caliber a year: the Tourbillon Barrette-Mirroir AK-05 in 2016. And finally in 2017, the first non-tourbillon from him, the AK-06.

And for 2018, the Chronomètre Contemporain The Tourbillon Hour Minute AK02 was a celebration of Rexhep’s skills and vision in the craft of watchmaking. Showcasing the superior finishing and design.

The style is unmistakable. Rexhep focused on the finishing, in the design of the bridges and detailing to enable him to showcase his superior finishing. From sharp outward angles, to ultra acute inward ones. From magnificent anglage, executed almost perfectly, to the mirror polished surfaces to the Côtes de Genève engraved striping, hand polished and brushed surfaces, rhodium treatment, beading and hand engraving.

The next challenge was then to go after precision, a subject which has fascinated young Rexhep since his teenage years. He got his first taste during his apprenticeship in Patek Philippe, and for his graduation project, he made a school watch. This was a chronometer pocket watch and Rexhep was hooked on the chronometer.

His instructors were so impressed with his skills that he was allowed to inscribe his name on the dial, something quite unusual in school watches. The school watch is an amazing piece of work. The pocket watch with a lepine Patek caliber is engraved “Patek Philippe Piece Ecole” on the movement. And shows immaculate finishing. The watch also carries a Poinçon de Genève, unusual for a school watch. Rexhep still dreamed of making a his own chronometer. From ground up. To him it would be a special watch, and as a person who is totally captivated and passionate about timekeeping, the chronometer is the ultimate. And a chronometer in his mind is a watch which is regulated to +/-1s a year. And the Chronomètre Contemporain came to life. Photographed at the Hour Glass Headquarters in Singapore. December 2018.

We reviewed a prototype of the Chronomètre  Contemporain, and during the chat, he showed us the commercial release. There was marked improvements on the dial, with many tweaks. As an example, the sub-dial for the small seconds hand at 6 is sunken and carries a silvered edge. The dial remains grand feu enamel. The movement finishing was also elevated several levels. We will publish a followup to the Chronomètre Contemporain review with a Watchscapes article soon. 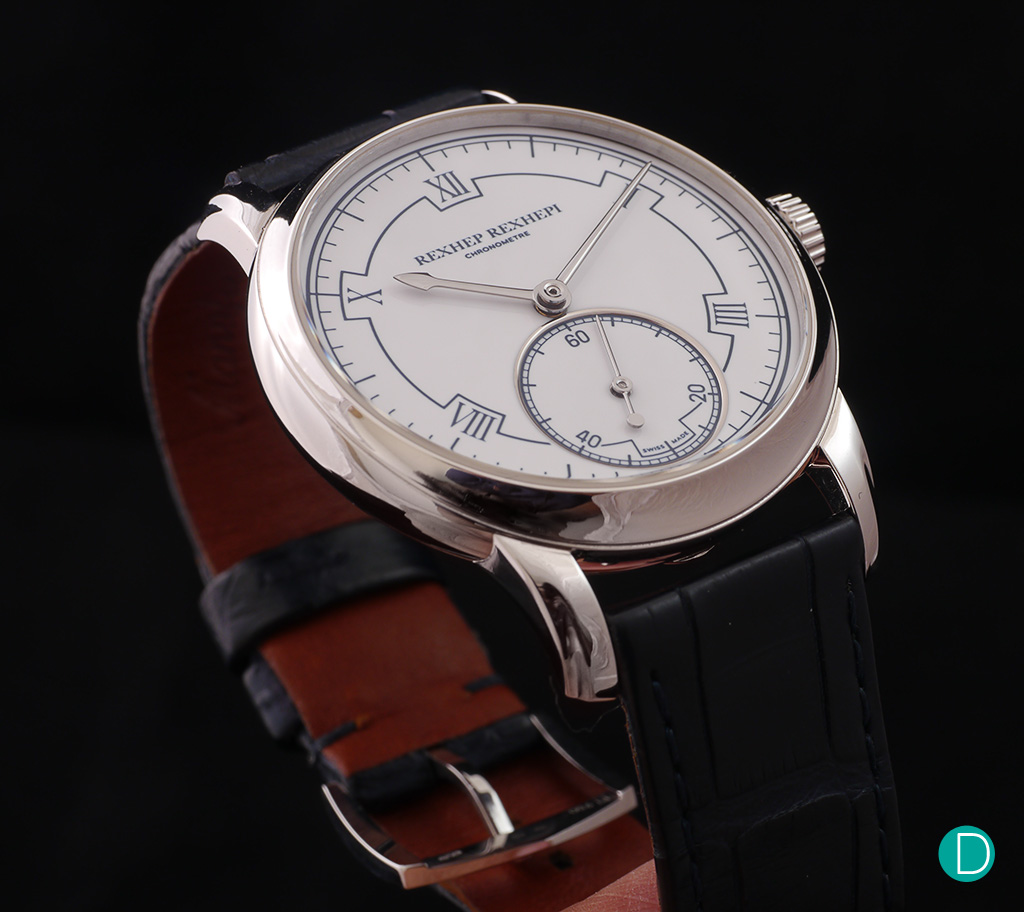 The Rexhep Rexhepi brand name is reserved for more classical interpretations, Shown here is the Chronomètre Contemporain which exudes tradition and a very classical aesthetic. This is the final commercial release version, with small detail changes to the dial, and massive finishing refinements to the movement as compared to the prototype we photographed for the review.

When asked what makes a chronometer so special, Rexhep answered that its the intricate process of component selection – only the finest make it, the process of adjustment and regulation which makes a chronometer from a regular watch. The Chronomètre Contemporain were originally offered with an option of the Beçanson Observatory certificate, but according to Rexhep, all clients chose that option, so all deliveries will be made with the certification. Loupe in eye, is perhaps when Rexhep is most happy. Working at the watches. Photographed in Singapore, December 2018.

Up to 2015, Rexhep had to take on other projects for other brands as a means of survival, but since then, he only does work for his own watches. The early watches were built on a base movement, but the current collection is 100% in-house. Having said that, he still regularly outsource components. He is planning to buy a CNC machine to bring the manufacture of bridges and plates in-house. Though the bridges and plates are designed and finished in-house, Akrivia does not own the facilities to manufacture them yet.

The goal is to do everything in-house. While this may not be the most commercially brilliant option, remains true to the passion that we have seen in Rexhep. Seen here explaining the details of the Chronomètre Contemporain to Michael Tay of The Hour Glass. Photographed December 2018 in Singapore.

And plans to make perhaps 35 watches by then, scaling up to no more than 50 watches a year in 10 years.

We ended by appealing to the watch lover within him…asking which complication he likes best. Without blinking an eye, he shot back – The Chronograph. Because he can see the mechanism, see how it works. Because the chronograph is a robust, functional complication. And when asked which chronographs he admires most, Rexhep said, “without a doubt the Patek Philippe Ref. 5004 Split Seconds Chronograph with Perpetual Calendar and the Datograph.”. And swiftly added, “The first generation Datograph, of course.”