As an independent brand in the world of watch making, AkriviA has always given us works that are entirely unique and novel in nature. This is not surprising due to the fact that they are not restricted to certain design principles or rules much like other established watch brands or house. Also, a possible downside of being independent is the lack of vital resources such as finance or R&D to drive better designs and innovation. Here we fin their ArkiviA Tourbillon Hour Minute quite impressive.

However, we do not see any hints of the aforementioned when AkriviA announced the release of the Tourbillon Hour Minute. This new collection brings out the time honored trade of traditional watchmaking, embodying finesse, sobriety and elegancy in its offering. The independence of the brand has given its inventor and owner, Rexhep Rexhepi the autonomy to create a new model that offers a tribute to traditional dial realizations techniques that is pretty rare these days in the watch industry.

It is after the excellent chronometric results of the Tourbillon Monopusher Chronograph that the creator, Rexhep Rexhepi decided to utilize the same base of the movement in the new Tourbillon Hour Minute. This model can be easily distinguished from others by the purity of its design and special dials that can only be realized using very traditional techniques. The Tourbillon Hour Minute featured here has the special hands AkriviA and a hand-blueing dial with a flame which was specially sent to Singapore. 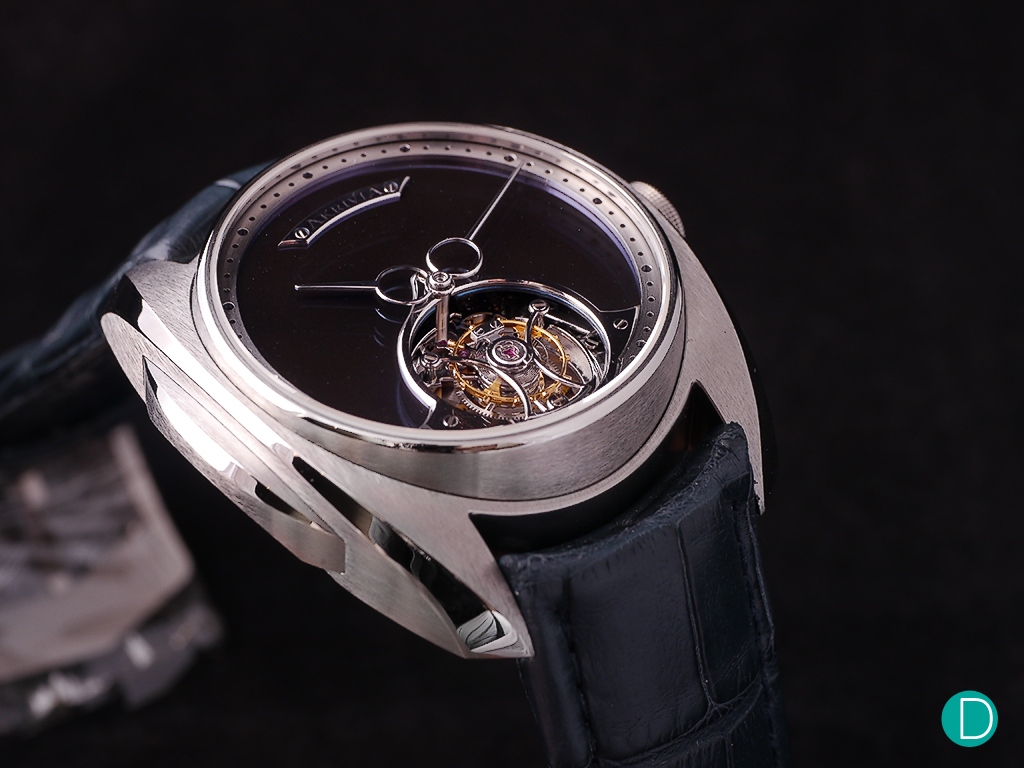 The Tourbillon Hour Minute with the special hands AkriviA and the very unique “matte-polished” dial.

The AkriviA Tourbillon Hour Minute comes in a 42.5 mm Titanium casing and on our first look at the watch, the immediate attention is drawn to the special dial design whose aspect “matte-polished” is made possible thanks to a very special handmade technique. The “matte-polished” surface can only be attained after several hours of hard work to achieve the right balance in finish.

A very unique blend of crushed rock and oil is laid out on a flat surface such as glass or marble and after which, the steel dial is affixed on this mixture which then carries out tiny circular movements until reaching the perfect homogeneity of the “matte-polished” finishing. This is a time consuming process for the watchmaker to achieve the right finishing and the workmanship of this dial requires at least several hours of work. It takes a high level of concentration and standards to obtain a result that is worthy of AkriviA’s requirements. In this special edition, the Tourbillon Hour Minute seen here is fitted with special AkriviA hands that is also used in its Tourbillon Chiming Jump Hour edition. We think the delicately polished hands look lovely as it slowly sweeps across the “matte-polished” dial, drawing full attention on its own.

Of course, the main attraction of the watch is the manually wound movement of the Tourbillon Hour Minute which oscillates at 21,600 vph on a single barrel with a power reserve of up to 100 hours, characteristics similar to the movement used in the Tourbillon Chiming Jump Hour and the Tourbillon Regulator. The watch displays hours, minutes and seconds all thanks to the tourbillon which is making a 60 seconds rotation and also featuring a Swiss anchor escapement mechanism in the tourbillon. The movement features 36 inward angles, a mark of impressive workmanship

The movement features “Côtes de Genève” finishing, hand graining and hand polishing with rhodium finishing as well as manual circular graining. What is quite impressive about the movement is that it features 36 inward angles, showing the excellent craftsmanship that goes into AkriviA watches and the amount of effort needed to attain the right standards. The AkriviA Tourbillon Hour Minute is a unique watch and this can be attributed to its special dial design that requires many hours of hard work to attain the right finishing and balance for the perfect homogeneity of “matte-polished” finishing. One thing remains is the classic layout of the dial and design of the watch casing; retaining the classic AkriviA look.

As mentioned earlier, this is a new and independent brand and with it, brings a lot of promise in terms of innovative concepts and designs given the autonomy it enjoys by being on its own. The Tourbillon Hour Minute is certainly worth a look and AkriviA proves that one does not need vast resources to build a magnificent timepiece, sometimes it is just about revisiting traditional methods and improvising them to get the outcome or finishing you want to attain.