There is more to the horological journey than collecting. We at Deployant believe that, beyond collecting grails and iconic pieces, the honest appreciation of the heritage and history behind a brand is just as, if not more important than owning a large collection. The knowledge of a brand’s past, as well as how it has influenced its current lineup and direction, can only serve to increase the level of appreciation that watch lovers have for their pieces.

In a bid to raise the level of awareness in the local watch community, Deployant teamed up with World of Watches II, an Authorized Seiko and Grand Seiko Dealer in Singapore on a Thursday evening to organise a sharing event with the local watch community. The topic chosen for the night was Grand Seiko which was received with overwhelming response; sign-ups were full within 30 minutes of announcing the event. Full house at the Grand Seiko Talk at World of Watches 2.

Tucked away in a corner of Wisma Atria along Orchard Road, the shop quickly filled up with eager enthusiasts keen to learn more about a well-known but often underappreciated brand in Grand Seiko. As everyone settled in, our Chief Editor Peter Chong started his presentation. It was one solely focused on Grand Seiko in particular, not including Seiko’s non-luxury offerings. The talk started off with the humble beginnings of K. Hattori Watch Company back in 1881, but it was not until 1960 that the first Grand Seiko was released – the 3180. In 2017, Grand Seiko officially became an independent brand from Seiko. Grand Seikos are manufactured in 2 separate factory facilities: Seiko Instruments in Morioka, and Seiko Epson in Shiojiri. While at first glance, it might not seem make sense for Seiko to split its productions into 2 factories that are quite a distance from one another, this is done on purpose. Each factory produces a different line, and a little friendly internal rivalry serves to maintain the high standards that Grand Seiko are known for.

Seiko Instruments in Morioka operate out of the Shizuku Studios, where the 9S Mechanical and Hi-Beat movements are made. At the ultra high end, they make the Credor Fugaku. Seiko Epson in Shiojiri produces the 9R Spring Drive and 9F Quartz movements from their base in Takumi Studios. In addition to this, they also operate the famed Micro-Artisan Studio under the Seiko Epson umbrella that produces the ultra-high end pieces such as the Grand Seiko SBGD001, Credor Minute Repeater, and both versions of the Credor Eichi. When asked about the quality of work that the Micro-Artisan Studio produces, Philippe Dufour himself remarked, after spending some time as a finishing consultant at Seiko Epson: “They have nothing left to learn. They are at the top.”

After a brief history of Grand Seiko, the talk shifted to the vaunted Design Grammar that is present in all its pieces. Pioneered in the 44GS, this blueprint is the basis for Grand Seiko watches. After fulfilling the above, the watch also has to be precise (movement), durable (case), legible (dial and hands), and last but not least comfortable (case). Peter brought up the case of one of our writers, Chelsey, who has a 5.5 inch wrist yet is able to wear the Grand Seiko SBGA111 without it looking overly clunky or hanging over the sides of her wrist. This can be attributed to the short lugs on Grand Seiko which curve down as well, minimising the lug-to-lug length while maintaining a larger dial for optimal legibility. This plays well to the Asian market where both men and women have slightly smaller wrists than their Western counterparts. 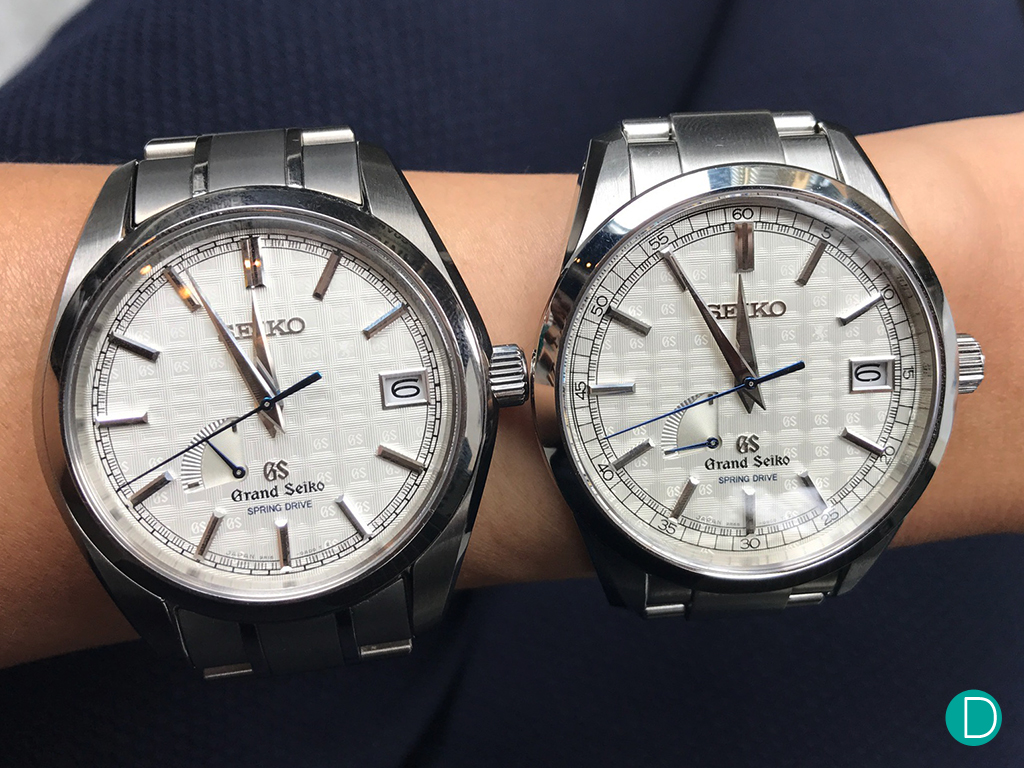 Another innovation from Grand Seiko that is often overlooked is their “half-links”. One might wonder why these half-links are even a point worth mentioning since many other brands feature half-links in their bracelets. Here’s the catch: the half-links from Grand Seiko are not actually half the length of the normal links. They are actually slightly larger than half, somewhere in the region of 0.6 times the length of a normal link, hence the inverted commas “half-links”. The purpose behind this is that Grand Seiko wanted to maximise the customisability of the bracelets like so: remove 1 half-link, and you have about 0.4 link length. Remove 2 half links but add 1 full link, you have 0.8 link length. Add 1 half-link, and you have 1.6 link lengths. Add 2 half-links and you have 2.2 link lengths. The permutations are enormous, perhaps mathematically inclined reader can tell us the number of permutations, but it boggles our mind.

Yet another example of Grand Seiko’s pursuit for perfection lies in the glass: Grand Seiko developed a special anti-reflective coating which they call Clarity, that does not reflect a characteristic blue sheen which appears on other watches when you view at an angle or when taking pictures. With all the thought that went into the dial and hands, wouldn’t it be a shame to let it go to waste just because of reflection? A black dial looks black, and not blue. And a blue dial remains blue, with no tinge of violet. That was Grand Seiko’s thought process, leading them to use this special AR coating that ensures their pieces look exactly the way they intended them to be at every angle.

Grand Seiko’s watches do reflect plenty of light, though. Their famed hand-finished zaratsu polish is applied to every aspect of the watch: every nook and cranny of the case, every link in the bracelet (which is brushed only after the zaratsu), and the top AND bottom of the hour hands. The concept of spending extra time to apply zaratsu on an aspect that literally no one, save the watchmaker, will see might sound patently silly, but such is the pursuit of perfection. No stone is left unturned. The distortion free reflection of the text on the Zaratsu finished case is a clear demonstration to the pursuit of perfection.
Photo credit: Grand Seiko.

The Zaratsu finish is similar to the Swiss technique of black polish that is often seen in haute horlogerie pieces, but zaratsu is possibly a level of difficulty higher than the standard black polish. The reason why black polish is so named is that the polish only reflects light at one angle, and seeing it from another angle makes the polished part look black. Swiss black polish techniques are developed for flat surfaces, but the Zaratsu finishing is appplied to even curved surfaces. The result is a mirror polish, which reflects light without distortion. That’s why photos of Grand Seiko pieces always look so illuminated from any angle. Talking about the proprietary Zaratsu finishing by Grand Seiko

This level of attention to detail is also given to all other parts of the watch, especially the case and movement. Everything is made in house at Seiko, which affords them the quality control in every piece that leaves their factories. Cases are forged in 12-15 stages with a 300 ton weight at 1000 degrees for steel and 800 degrees for gold, followed by CNC and milling down to size. Special pieces like the SBGD001 Spring Drive 8 Day Reserve undergo a cold forging process, where the metal is forged at a temperature under its crystallisation point so that structure of the metal is maintained, allowing it to be stronger than if it were to be forged normally. The end product is an in-house case that is <1mm larger than the actual end product, so as to allow for material to be taken off during the Zaratsu polishing. The finishing on the movements in Grand Seiko need no further expounding, of course. The pictures speak for themselves. What is surprising, or not, is that Grand Seiko even extends the highest quality of finishing to their quartz movements. The movement detail of the Spring Drive Chronograph 9R86.

While there is so much more that can be discussed from Grand Seiko, from the intricacies and ingenuity of the Spring Drive movement, to the world competitions that Seiko had won in the 50s and 60s (beating out all the more recognised watch maisons), time was regrettably running short. With that, the talk concluded to considerable applause from an appreciative audience who went home that night knowing a little bit more about the world of watches.