If you have been following @deployant on Instagram, you would have noticed that we recently started the #SpringDriveSunday hashtag that was well-received by Seikoholics from around the world. We ran a mini Instagram contest and gave away a Spring Drive lapel pin to a reader in Australia. It doesn’t end here, we will be having ongoing contests along the way and yes indeed this shows our little obsession towards the very radical, “hybrid” system of the Spring Drive caliber.
And for a Spring Drive caliber fanatic like ourselves, perhaps the most befitting Grand Seiko would be the 10th Anniversary Limited Edition models that were first introduced in the year 2014. The SBGA111 is one of the two LE models made to commemorate the movement’s 10th anniversary. Watch pictured here is on author’s own croc-leather strap.

The year 2014 marks the 10th anniversary of the 9R Spring Drive caliber. The self-winding movement was first introduced in the year 2004 by Seiko, designed and made in-house, after a long-time (27 years to be exact) vision of Seiko engineer Yoshikazu Akahane who started working on the “hybrid” concept in 1977.

Both the SBGA111 and the SBGA109 were introduced together as part of the 10th Anniversary edition, with the SBGA111 in a stainless steel case and the SBGA109 in a titanium case. Although at first glance they may look indistinguishable, but upon comparison they are significantly different. In fact, only some components of the watches are identical, i.e. the hands, hour markers and the power reserve indicator. The SBGA109 (belonging to the author’s friend) vs the SBGA111. How many differences can you spot?

Here’s a quick comparison between the two watches:

Nicknamed “tatami mat” by Seikoholics, the dial design on these pieces would be the core characteristic to identify the 10th anniversary edition from all other Grand Seikos. The dial is made up of many pressed “+” symbol, which is Japanese kanji for the number “ten”, a suited symbol to commemorate the 10th year. Between the “+” there are tiny “GS” motif embossed on the first and the last thirds of the dial. The hidden surprise on the dial would be the Seikosha lion lurking just below the 10 minute marker, and once again making reference to commemorate the 10th anniversary. A close-up at the Seikosha lion that sits at the 10 minute marker. Also evident in this photo are the blade-like Zaratsu polished hands.

The power reserve indicator features a blue hand that matches that of the smooth, gliding seconds hand. At the rehaut, there is engraving that states “Caliber 9R 10th Anniversary Since 2004”, and these are the only Grand Seikos with such engraving, which makes them even more special. The rehaut showing the engraving: “Caliber 9R 10th Anniversary Since 2004”

As are all Grand Seikos, the finishing is done Zaratsu method, also known as blade or black polishing, made by carefully applying a rotating tin plate against the metal at a very precise angle. The result of Zaratsu polishing is distortion-free reflections that are visible even in low light conditions. 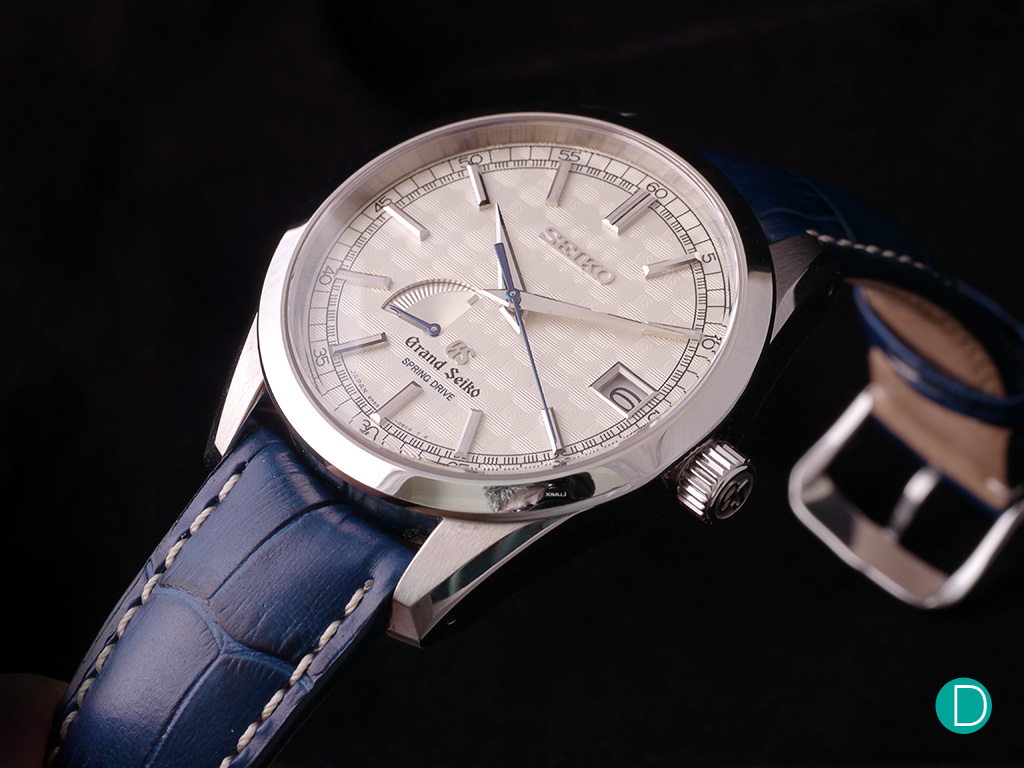 The 12, 6 and 9 hour markers in these editions are rectangular in baton shape instead, similar to the SARB series “Kit Kat” hour makers (as nicknamed by Seikoholics), rather than trapezoid-shaped ones used on the Grand Seiko Snowflake. 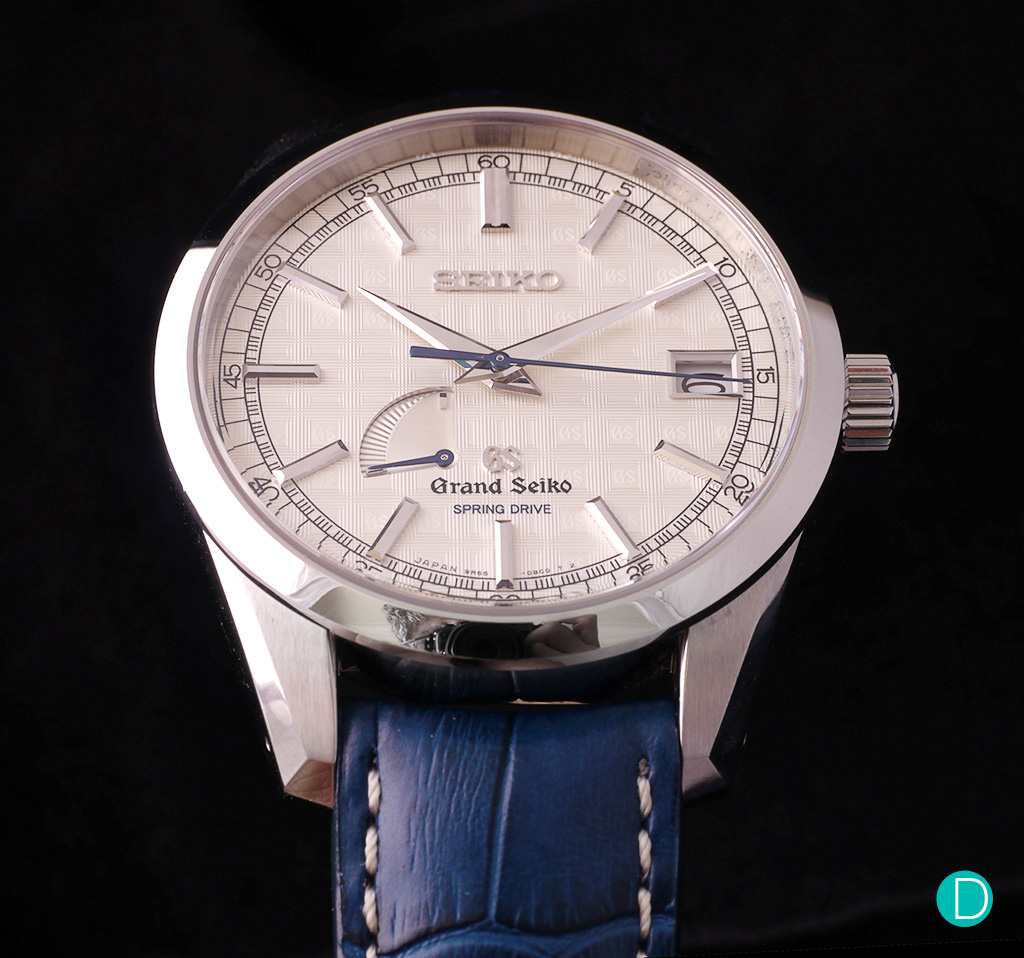 The case on the SBGA109 uses Seiko’s “Bright Titanium” alloy which has lightweight properties, but known to be 1.5 times harder and more “wear resistant” than stainless steel.

The hands keeping in character with the Grand Seiko fashion, are the black-polished dauphine hands which both pieces share in identical. On the SBGA109, the movement used is the more superior 9R15, which comes with a decorated rotor with the solid 18k gold medallion right in the middle of the rotor, increasing its weight for rotation. It is tested for accuracy at +/- 0.5 sec per day, thanks to the use of the specially selected Seiko lab-grown quartz crystal.

Detailed explanations about the Spring Drive caliber can be found here: The caseback comparison between the two models. Left: SBGA109 with the 9R15 movement. Right: SBGA111 with a covered caseback. The SBGA111 features a closed caseback with the Grand Seiko Lion of Seikosha medallion that is full of vintage vibes. The author’s piece as pictured is numbered 0133 out of 1,500 pieces. The SBGA111 is a majestic one on the author’s wrist, be it on its original bracelet or on the matching blue croc-leather.  However, as eye-catching as they may be, Grand Seiko pieces are still often underrated for what they are worth. Perhaps it could be due to the legacy of the old “Seiko” logo on the dial, but things are definitely changing now.

Both are likely to be sold out from authorised dealers in Japan, but if you are tenacious, you will still be able to hunt for either in the secondary market ranging from USD3,000 to 7,000 depending on its general condition.

A special mention of thanks to the author’s friend for providing the SBGA109 as a comparison for our review.