Comparing the Philippe Dufour Simplicity and the Credor Eichi II 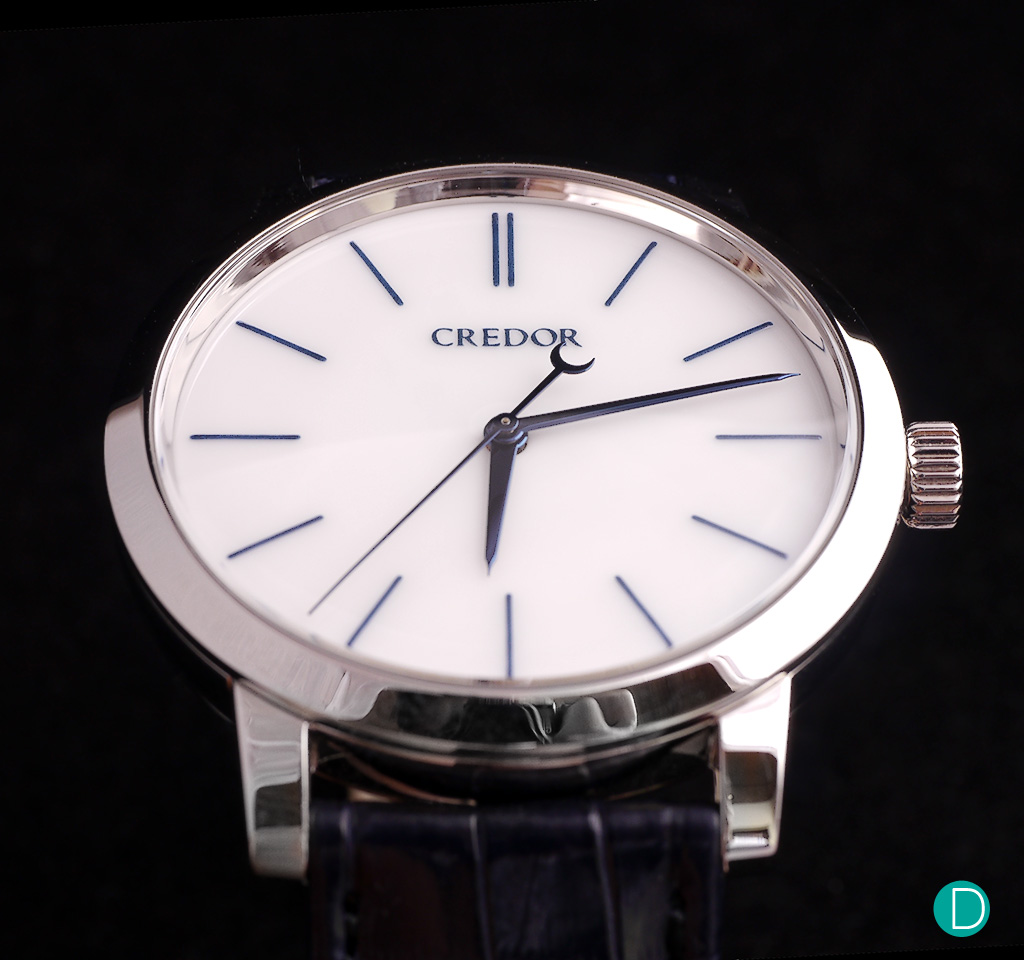 The Philippe Dufour Simplicity features a fully-polished rose gold case with a stately diameter of 37 mm (earlier specimens came at 34 mm in diameter). The Credor Eichi II comes in a platinum case, also fully-polished, but is more contemporarily sized at 39 mm. It is interesting to note here that the winding crown of the Eichi II is also platinum – almost all Swiss made platinum cases use white gold crowns. While both cases are well-crafted and finished, it is the dial (and the movement) of both watches that will enjoy the greater share of attention. 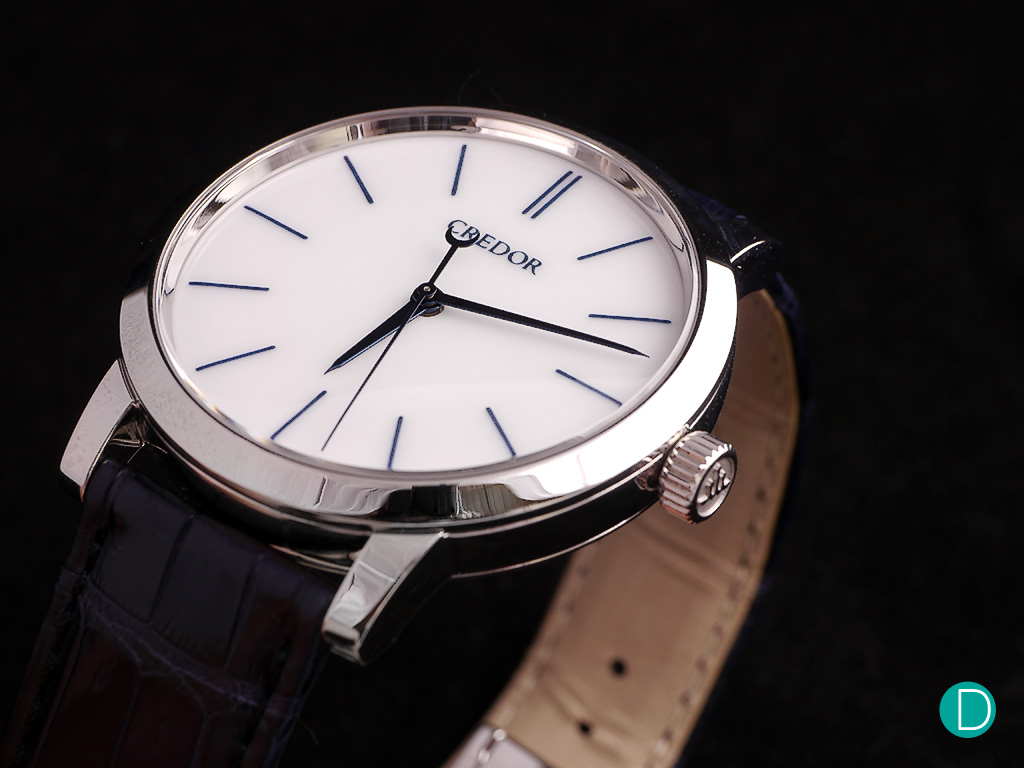 The case of the Credor Eichi II is 950 platinum. The cast platinum crown with the Credor logo is visible here.

The white lacquered dial on the Simplicity is incredibly luscious and pristine. It provides the perfect canvas on which the black railroad-style minute and seconds track, as well as the Arabic and Roman numerals are printed. The dial is sunken at 6 o’clock where the seconds sub-dial is, and below that sub-dial are the inscriptions ‘Swiss Made’ and ‘Metalem’ – referring to the dial manufacturer. Philippe Dufour lets Metalem print their name on the dial as an act of defiance to the usual practice of the industry keeping suppliers secret. The time is indicated by heat-blued, open-tipped hands (hours and minutes) and a leaf-style hand (seconds). Overall, the Simplicity dial exudes an unmistakable air of tradition and class – one will ultimately find that it is very much grounded in design but has absolutely transcendent aesthetics. The dial of the Eichi II, on the other hand, may come off as uninteresting at first glance. ‘Minimalistic’, though, would be a more suitable word to describe its design, and ‘ethereal’ to describe its qualities. The material chosen for the dial is an unconventional one: porcelain. The porcelain dial gives off a satisfying lustre. Its striking whiteness is due to the fact that it is made of almost 100% alundum (a fused form of aluminium oxide). This isn’t the first time that a porcelain dial is used in a Credor; the Eichi (which came before the Eichi II) dial was made by Noritake, a Japanese porcelain house which supplies bone china to the Japanese Imperial family. The first of its kind. The dial of the Eichi was made by Noritake who are based in Nagoya in the Aichi Prefecture.

The dial of the Eichi II, however, is not produced by Noritake – in fact, all that is known about the dial manufacturer is that it is situated in the Nagoya. Credor’s decision to not reveal the name of the dial manufacturer is in stark contrast to Philippe Dufour’s approach of openly declaring the dial manufacturer on the Simplicity’s dial. While the dial is indeed crafted by a third party, the indices and the company marquee are hand-painted by artisans at Seiko’s Micro Artist Studio. Let not the simple dial design fool you into thinking that it’d be a simple task. Said artisans (who are also fully-qualified watchmakers) have undergone at least three years of painstaking training from well-known ceramics makers in Japan. Only after mastering the art is the artisan allowed to paint the dial of the Eichi II; due to the technicality of the task, only one dial can be completed a day. The indices and the ‘Credor’ inscription are hand-painted by a single artisan. The task requires a high level of focus and skill; as such, only one dial is produced each day.

From afar, the indices and marquee look perfectly executed, but look closer and you’ll notice irregularities. These irregularities are not mistakes – they are proof that an organic process has taken place in the form of an artisan’s touch. Upon further inspection, the grainy texture of the paint becomes almost palpable as it contrasts stunningly against the smooth, shiny surface of the white porcelain dial. The hands are executed in steel, and flame-blued by hand to a hue that closely matches the blue of the markings. As is usual for high-end Seikos, the seconds hand is slightly curved towards the dial at the end to reduce parallax error. The crescent shape on the other side provides a visual counterpoint to the straight lines of the other hands and indices. In a nutshell, the idea that the Eichi II dial is ‘simple’ is betrayed by the monumental level of craftsmanship devoted to it. Dare we say that even the Simplicity would be slightly envious of the Eichi II’s epic dial. Up close with the dial of the Eichi II. The markings are all painted by hand, not transfer printed.

The journey from case to dial is a crescendo of “oohs” and “ahhs” reaching a climax as we turn to the case back where the movements for both watches are displayed in full splendour. The Simplicity movement, which remains THE traditional Swiss movement to aspire to, was designed by none other than Philippe Dufour himself. While the plates of the movement are made by CNC machines (even the Grandmaster himself understands that there are some things machines simply do better than human hands), the finishing is completely done by Mr. Dufour himself – by hand. When it comes to high finishing, the skilled hands of an artisan/watchmaker remain superior to the cold touch of a machine, at least for now. Case back view of the Simplicity.

The movement scores absolute top marks in design, aesthetics and finishing, becoming the Simplicity’s claim to fame. Of note is the movement’s bridge edge finishing – not only is it perfectly polished, it also has the most elaborate and evocative internal and external angles we’ve seen on any timepiece. The Grandmaster places angles where they should be and executes them with superb consistency and never-before-seen sharpness. On the surface of the bridges, Mr. Dufour employs a pleasingly wide Côtes de Genève motif that has a creamy, mesmerising quality. It does not appear harsh or jarring like those found on most other Swiss movements, high-end or otherwise. Rather, it is soothing, with voluptuous waves within each stripe. Also a pleasure to indulge in is the uniformity of the gaps between the bridges and cocks and how they trace the edges of one another.

Intensely sharp angles contrasted by billows of Geneva waves – this is the greatest allure of the Simplicity movement.

Meanwhile, the Seiko Calibre 7R14 that powers the Eichi II takes tradition and adds a contemporary twist. Inside the movement is Seiko’s proprietary Spring Drive mechanism which greatly increases the timepiece’s precision (to learn more about the Spring Drive movement, we recommend reading our write up on the Credor Spring Drive Minute Repeater). What would almost surely be the first thing that catches the attention of the beholder is the mainspring barrel that is skeletonised with a bell flower motif. To keep the clean design of the dial, the power reserve indicator is located on the case back rather than at the front.

This is then followed by the bevelling work that highlights not just the bridges, but also the gap between them that form the ‘stem’ and ‘leaves’ of the bell flower. The bevelling itself is quite a sight to behold. Like the Simplicity, it is not merely a polished flat chamfer surface, but is subtly convex with a perfectly regular width across the entire edge of the bridge. The anglage in the Eichi II is noticeably wider than that found in the Simplicity and more than double the width compared to the Eichi’s (according to Seiko documentation). The bevelled surfaces are subtly convex, meticulously polished and pleasingly wide. They contrast amazingly with the brushed top surface of the bridges.

Interestingly, there are no internal angles to be found on the Eichi II’s bridges in spite of the fact that Seiko have the capabilities to do so (the Eichi is proof of that). The lack of internal angles does set the Eichi II apart from the Simplicity but even more so, the lack of striping on the surface of the bridges. They are finished with a linear brushed finish that is – while finely done – a little plain and boring. The use of rhodium-plated brass for the bridges (as opposed to untreated maillechort in the Eichi) also contributes to a sterile appearance that is in stark contrast to the organic front end of the watch. That said, the  material and method of finishing were chosen perhaps to allow the other elements – the flame-blued screws, the in-house grown jewels, the bell flower motif, the gold-filled engravings, and the heavenly bevels – to stand out on their own. The bridges are in brass and rhodium plated. Finishing is exemplary.

It was tough from the beginning to pick a ‘winner’ between the two and it feels wrong to do so. On the front end, we feel that the Credor has the more interesting dial, at least from a craftsmanship point of view. The dial of the Simplicity is as traditional as it gets in terms of construction and design. Both dials are manufactured by third parties; Seiko paints the dial themselves while Philippe Dufour unabashedly professes the dial manufacturer’s name on his dial. The Credor Eichi II will likely fly under the radar when worn, that is, unless it is worn to a gathering of watch enthusiasts.

Movement wise, evidence points to the Grandmaster’s victory. It features the most magnificent bevelling, internal/external/rounded angles, and Côtes de Genève we’ve ever seen on any timepiece. While the Eichi II movement is also worthy of high praise, the plain-by-comparison bridge surface treatment, as well as the lack of internal and dramatically sharp angles puts it in second place. Philippe Dufour, photographed here in his atelier in Le Soliat.

The Philippe Dufour Simplicity (of which there are half a dozen variations) was produced in a limited series of 200 pieces. It is worth noting that Philippe Dufour produces less than 20 timepieces a year and the Simplicity run took over 14 years to fulfil. On the other hand, the Credor Eichi II is not a limited edition but limited in production – only 20 will be made each year. The Simplicity’s last known retail price is around CHF89,000, though earlier pieces costed significantly less. Last year, the market decided that the retail price for the Simplicity was undervalued; two Simplicity timepieces were sold at auction for around USD250,000 each. Meanwhile, the Eichi II is priced at just over USD50,000. If we had to pick a watch to buy, it’d be the Simplicity over the Eichi II because of its better movement finishing and aesthetics, its ‘Philippe Dufour’ heritage, and the likelihood of price retention/appreciation (even at auction prices). This is not to say that the Eichi II is anything less than a work of art. In fact, it is only one of few timepieces today worthy of mention in the same breath as a Philippe Dufour timepiece. With the pieces all sold out and prices now tripled, the Eichi II represents a tantalising, more ‘affordable’ alternative to the Simplicity that is sure to tempt every learned watch connoisseur. Two Simplicitys, one on our Chief Editor’s wrist, the other on Mr. Dufour’s, collide (figuratively) for a casual wrist shot.