We covered the Armin Strom Mirrored Forced Resonance in detail in 2016. The watch has turned out to be a runaway success for the small manufacture (read the story of the manufacture here) and is their current best seller. But they have not rested on their laurels. They pioneered a Configurator which allows a customer to customise the watches to his own ideals. And earlier this year, they released a streamlined version of the Resonance, and dubbed it the Armin Strom Pure Resonance. Available in red gold and stainless steel (as shown) the Pure Resonance is a purist approach to the concept of forced resonance.

The design is simplified to reflect the purity of the watch. In general, the approach is to pare down to the essentials. And concentrate on the dual balances oscillating in resonance. Two models are available with the usual AS nomenclature – the Water for the stainless steel case. And Fire for the rose gold case. The Pure Resonance Water is delivered with a blue dial, and the Fire with a black dial. In rose gold, the Pure Resonance takes a different persona from its SS brother, almost seem like a different watch.

The case remains largely the same, except it is now reduced in size to a slimmer 42 mm stainless steel or 18-karat rose gold case (1.4 mm smaller than the original version) with reduced lugs and crown and practically no bezel. The characteristic lip at 6 o’clock remains – an homage to the Armin Strom founder’s intent of providing a place for a personal engraving. 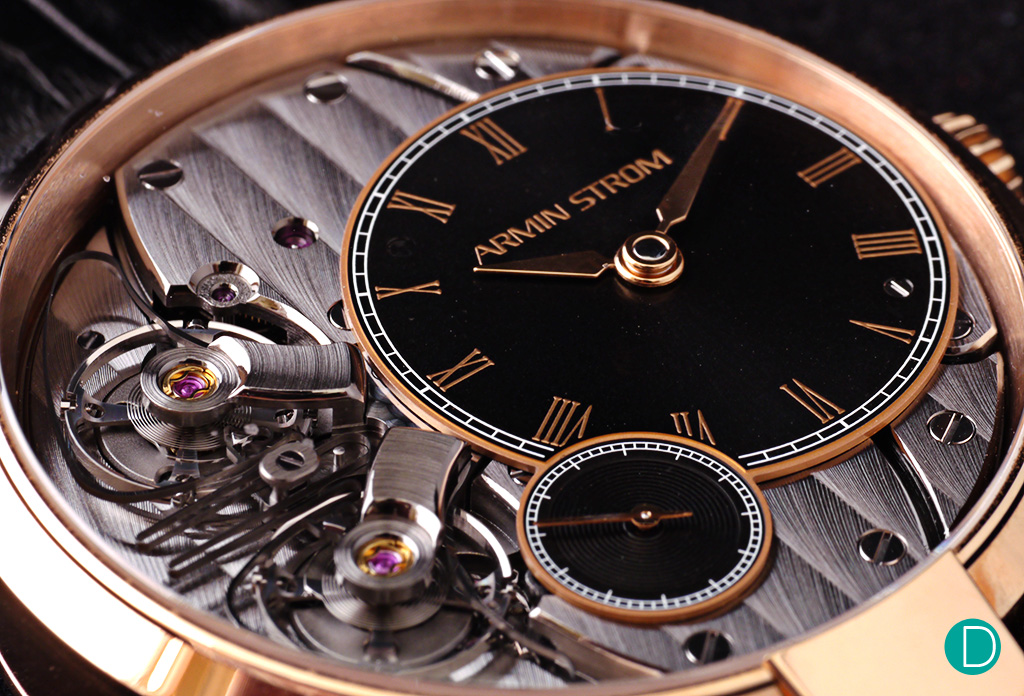 The bridges, now exposed on the dial side is decorated with côtes de Genève, applied for the first time at ARMIN STROM in straight lines. These stripes provide an interesting interplay with incident light. Under some angles, it all but almost disappears, and at others, it is prominent and provides a nice foundation to set off the double balances.

Then the movement, as it is the raison d’être of the watch. The caseback shows the double mainsprings and the double transmission wheels to wind up the watch.

The core of the watch remains the same as in the Mirrored Forced Resonance. The Caliber ARF16  has two movement trains, both independent of each other except that they are connected at the balance springs by a specially shaped spring. This spring, called the resonance clutch spring passes information from one train to the other, resulting in a resonance condition, where both trains are beating at exactly the same frequency. Rather than providing two seconds hands, one rotating counter clockwise, the design purity of the Pure Resonance demands that it be simplified. Claude Greisler did this by eliminating the twin seconds flyback mechanism of Caliber ARF15, replacing them with one clear-cut subsidiary seconds subdial. With it, the pusher at 2 o’clock. By eliminating parts which are not essential, the watch’s chronometry is improved. The time displays receive their proportioned energy from the lower regulator, while the upper regulator remains in place to create resonance.

Finishing on the movement remains exceptional, but retaining the original intent of good finishing without ornamental embellishments. All the haute horlogerie elements are catered for with consummate ease. We think the Pure Resonance is perhaps more handsome than its bigger brother the Mirrored Forced Resonance. The sleek size, and the simplified movement, focus on chronometry appeals to us very much. Especially for those of us who have a weakness for blue dials – the Pure Resonance Water in stainless steel takes our breath away. 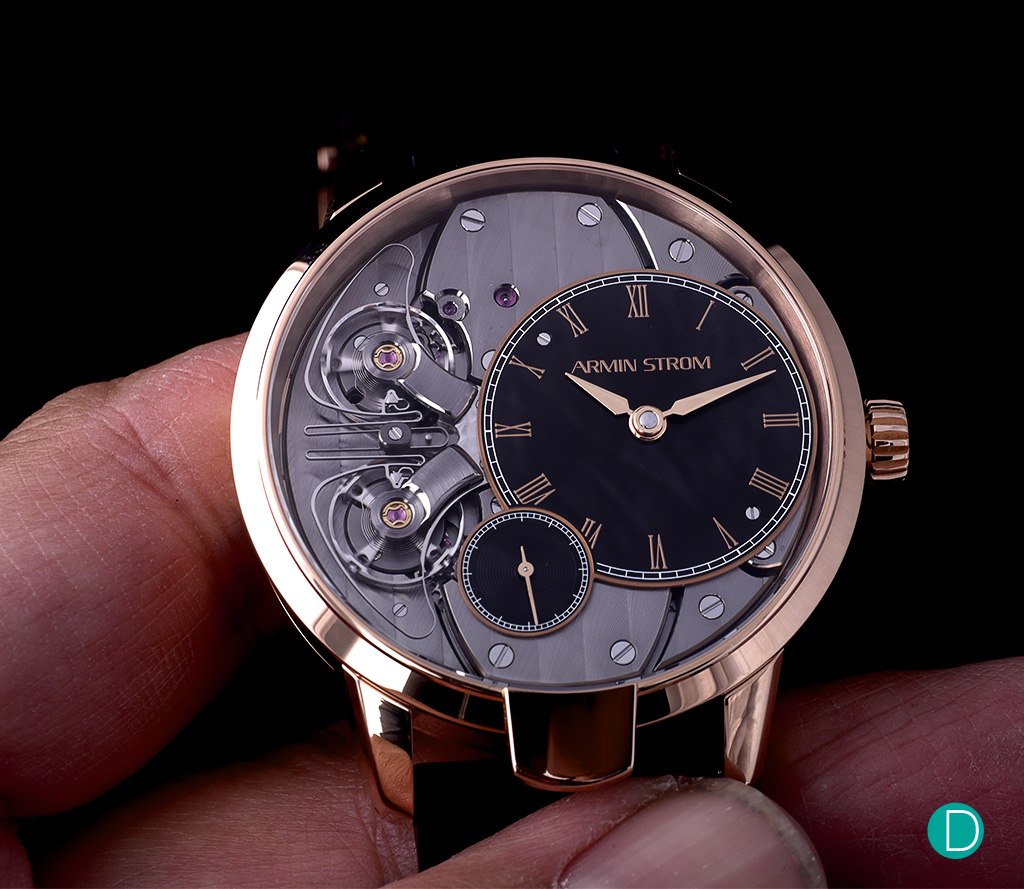