A Lange & Söhne Connoisseur Akademie was in town again last week, and the Deployant Team attended the class held in The Salon, National Museum of Singapore. Along with an exhibition of museum pieces and a small collection of rare collector watches, which included our Chief Editor’s own Lange LOG Cabaret, some media and customers were treated to a lesson in practical watchmaking. This is a new module of the Lange Akademie, the participants are guided on the assembly of a movement, and learn to appreciate how the movement train works and the power flow within. Here is our step by step guide to that. The Lange Akademie instructor is Lange Watchmaker and head of the Zietwerk Department: Robert Hoffmann.

Assembly of a movement wheel train

In this Lange Akademie, we used a robust ETA handwound movement for our class, as none of the participants are professional watchmakers. While the author has attended another session in Glashütte ages ago, where he worked on the gear train of a Lange 1815, this practice was discontinued soon after. Perhaps the damage to the movements were too painful to bear. And the instructors replaced the movement with an inexpensive ETA hand wound movement.

The Lange movement the and wheels are well finished and polished, and the plates and bridges are in maillechort, which is a metal much softer than brass used in the ETA movement. The maillechort used in Lange watches are untreated, unlike some of the movements made in the Valee de Joux tradition which also use maillechort as the base, but is plated with a thin layer of rhodium.

We start with this presented to us. The movement, disassembled is in the plastic container at the top of the photograph. The tools we need for the work is laid out on the green mat, and includes the movement holder, a loupe, screw drivers, tweezers, a wooden stick, a plastic probe and oil. First step in the assembly: insert the base plate into the movement holder. This is done by opening the thumbscrew, inserting the plate and tightening it so that the perspex clamps hold the movement firmly. We rotate the movement around, and the first step is to insert fifth wheel. The fifth wheel pinion is inserted into the jewel opening for the wheel. The jewel is an synthetic ruby, made of corundum (Al2O3). The purpose of the ruby is to hold a small drop of lubricant to reduce friction.

The fifth wheel is also known as the escape wheel, and features teeth which look like boots. Next, the barrel. The mainspring is already wound within the barrel in a separate step. This is usually done with a machine designed to do so. Note in the photograph above, the ETA movement is not fitted with a pair of jewels for the barrel, and the barrel runs on bushings. This is not critical in robust movements, and movements which feature 17 jewels do not use them on the barrels. The wheel train is then assembled from the fourth wheel, which makes one revolution every minute. This carries the directly driven seconds hand. The teeth on the fourth wheel engages and drives the pinion of the escape wheel which we just inserted in the previous step. The third wheel goes in next. Again the third wheel’s teeth engages and provides power to the pinion of the fourth wheel. 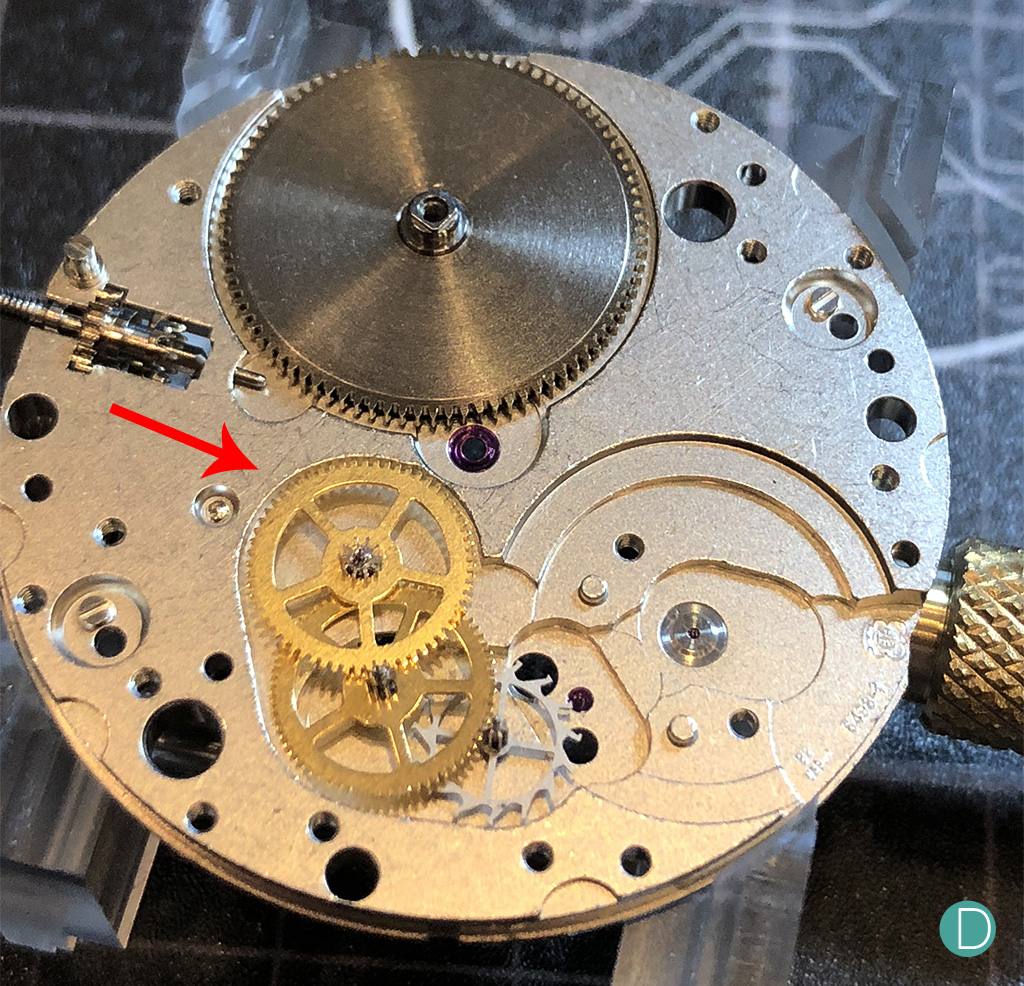 In the photograph above, the wheel train is complete, and it is easy to appreciate the power flow from the barrel whose teeth engage the pinion teeth on the second wheel, and this power is transferred down the wheel train from second to third to fourth to fifth (escape) wheels. The fifth wheel is blocked by the pallet fork, and only when the pallet fork is released by the balance wheel (not installed and not shown), is a bit of power allowed to “escape” from the fifth wheel. The entire train moves in one step each time the pallet fork unlocks. The power is delivered to wind the balance spring, and the pallet fork locks once this little impulse is given (escaped).

We are now ready for the assembly of the movement bridges. The main bridge is installed by carefully placing it over the top part of the movement. A locating pin helps the positioning. and the screw openings are also used as a guide. Once in place, the bridge is held in place and the movement turned to its side to ensure that each of the wheels have both pinions sitting in their respective rubies. Once that is done, we put in the screws to secure the bridge.

Note the click assembly is already installed in the main bridge. 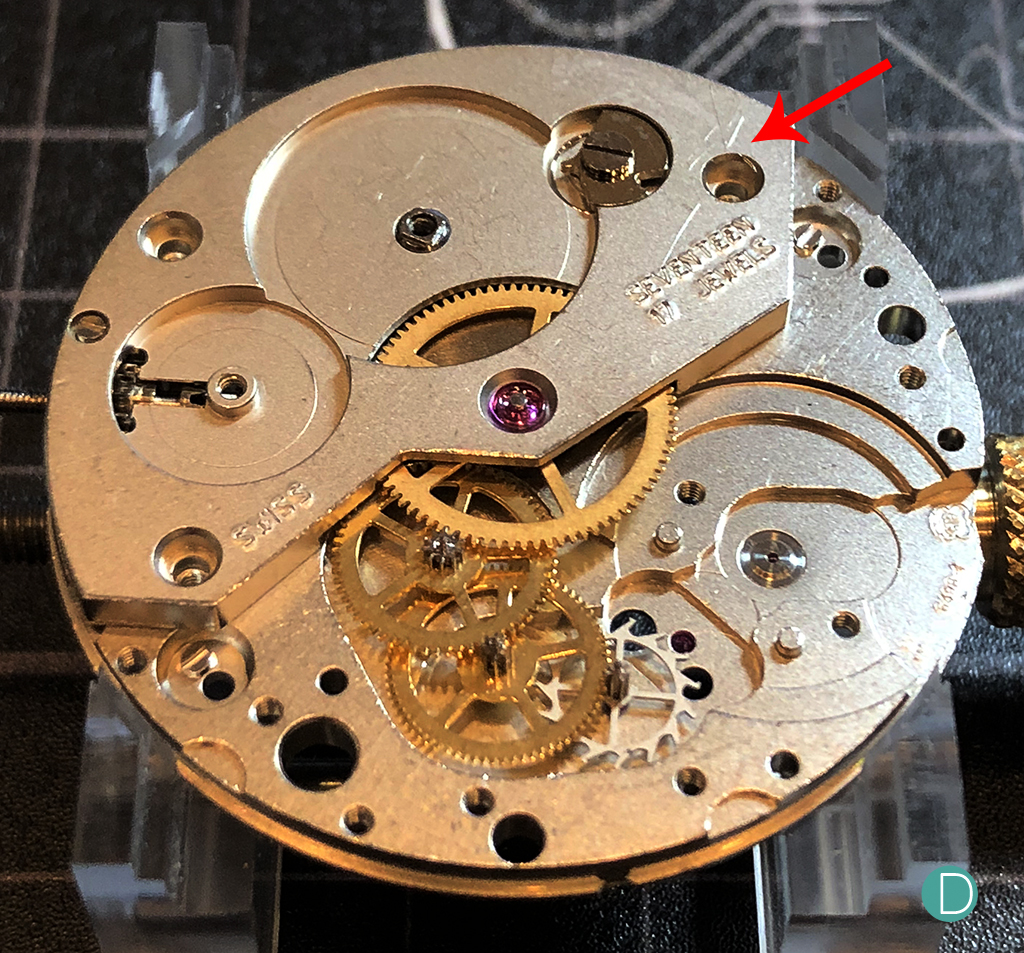 The second bridge is then installed in the same manner. After this, the transmission wheel for the hand winding system is installed. This transfers power from the winding action to the barrel. A large screw holds this transmission wheel, and the thread of the screw is secured in an anti-clockwise turning of the screw driver. This is the only reverse direction screw in the entire movement. The barrel wheel is then installed. This wheel features a square cut out which matches and fits the square pinion on the barrel. Care is taken to ensure proper engagement with the click. With both bridges secured, the movement train is complete. But we also installed the pallet fork and its bridge as a final step. The arrow below is the pallet fork bridge. In this movement, and in a large majority of movements, the Swiss Anchor System is used, and the pallet fork also visible in the photograph. The fork carries three jewels (thus making the number of jewels in a watch odd instead of even). And engages with the escape wheel’s boot shaped teeth on one side and with the impulse jewel on the balance wheel (not installed) on the other. The pallet locks the power from the mainspring, preventing it from gushing out when fully wound, and releases it with each impulse from the balance wheel. 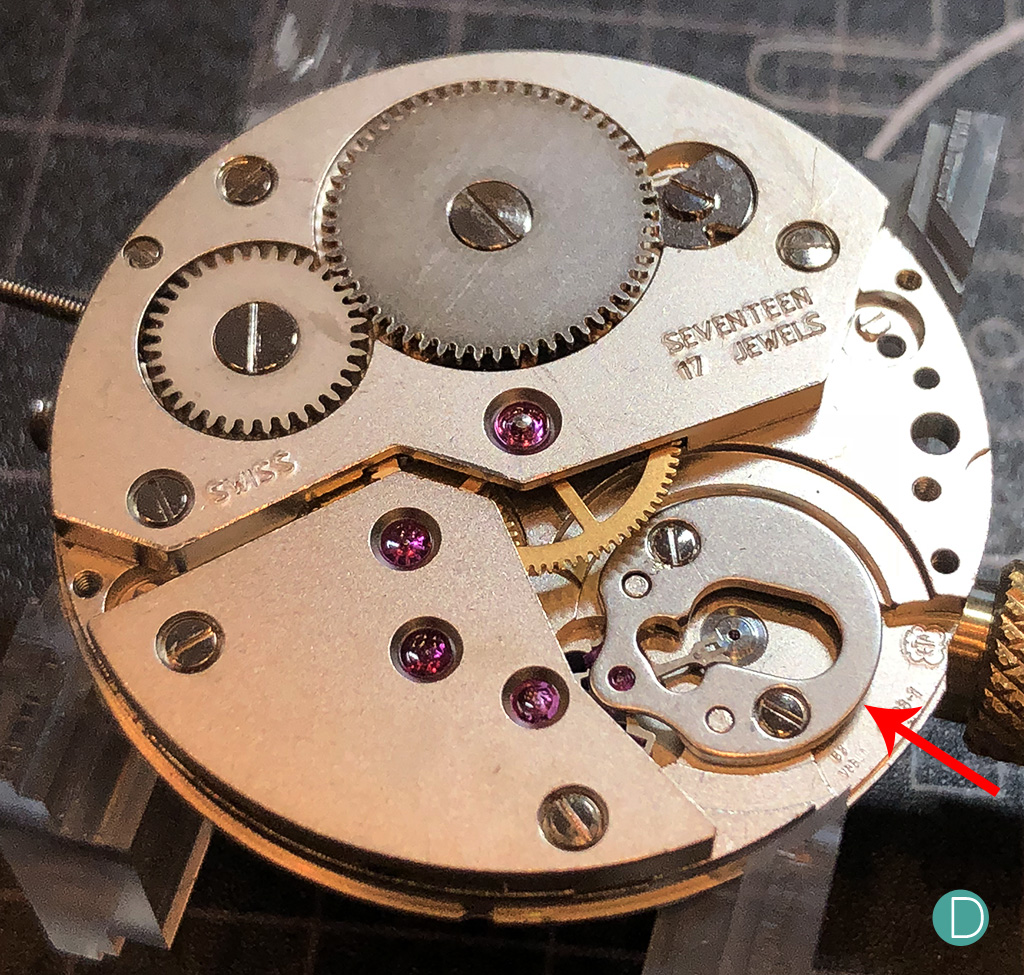 Note that at this stage, the movement is locked by the pallet fork. And the mainspring can be wound without fear of the power discharging through the wheel train. The final step to make the movement work is to install the balance, which is usually pre-installed in its cock. But was beyond the scope of this lesson.

This concludes the wheel train assembly.