We covered the announcement of the Vacheron Constantin Harmony series when it was announced during SIHH 2015. The collection is making its way around the world, to showcase the 7 special timepieces designated the Harmony Collection to celebrate the brand’s 260th Anniversary. We will cover the individual watches in some detail, but today, we focus our sights on a review of the art of finishing as exemplified by the Harmony Collection.

Please read the VC Harmony announcement to familiarize yourself with the watches.

We begin with the case design. The Vacheron Constantin Harmony Dual Time as an example of the beauty and elegance of the new case.

As can be seen in the example of the Dual Time shown above, the case is designed on a new shape for Vacheron Constantin: a slim cushion like shape, which exudes an elegance in a certain air of sprezzatura that can only be achieved by hours on the drawing board to refine and re-refine the lines. The result is magic: beautiful, elegant, and supremely beautiful.

Vacheron Constantin has shown time and time again their flair for dial works…from complicated techniques requiring grand feu, to the simpler dials, the choice of fonts, of colours, of wordings or lack of shows a deep sense of character in the designer. The dial of the entire Vacheron Constantin Harmony collection is a silvered opaline which exudes pure class and elegance. The choice of the red for the painted pulsimeter scale on the VC Ultra Thin Grand Complication Chronograph shown above contrasts beautifully with the blue for the painted Arabic numerals against a pure white opaline background accented by the black markings on the subdial. The blued steel chronograph split hands are beautifully shaped and sets itself apart from the traditionally shaped hands.

We have almost always been impressed with Vacheron Constantin’s movement finishing. Almost without exception, the movements are beautifully designed and magnificently finished.

As an example, we take the same Harmony Ultra Thin Grand Complication Chronograph.

The teeth of the peripheral rotor is visible on the right side of the photograph below. As the rotor is part of a cylinder, it runs around the movement, affording a full view of the movement. Also visible are the cogs which engage with the winding mechanism, visible at the lower right corner. And at the top and bottom left corners, the gold, engraved rotor is just visible. Note the high gloss finish if the movement, and the complexity of the split seconds chronograph movement. The base movement is in-house developed based on taken from historical cues from the Lemania 2310 ebauche. This is evident from the shape of the bridges, but the similarity ends there. The VC Caliber 3500 sports a peripheral winding rotor, when the Lemania is a hand wound movement. Also the split seconds chronograph works, is of course also completely in-house.

The chronograph is often mistaken by novice collectors as a simple complication, as indeed it can be found in inexpensive watches. But the craft required to construct and build a traditional column wheel chronograph to look beautiful and at the same time be accurate and robust is a high one. Some masters proclaim that it is indeed more difficult to make a chronograph, especially a rattrapante or split seconds than a tourbillon. VC hints at this, by making the most expensive piece in the Harmony 260th Anniversary Collection to feature a split seconds chronograph, sans tourbillon. While the tourbillon equipped chronograph (no split seconds) is the second most expensive in their lineup. 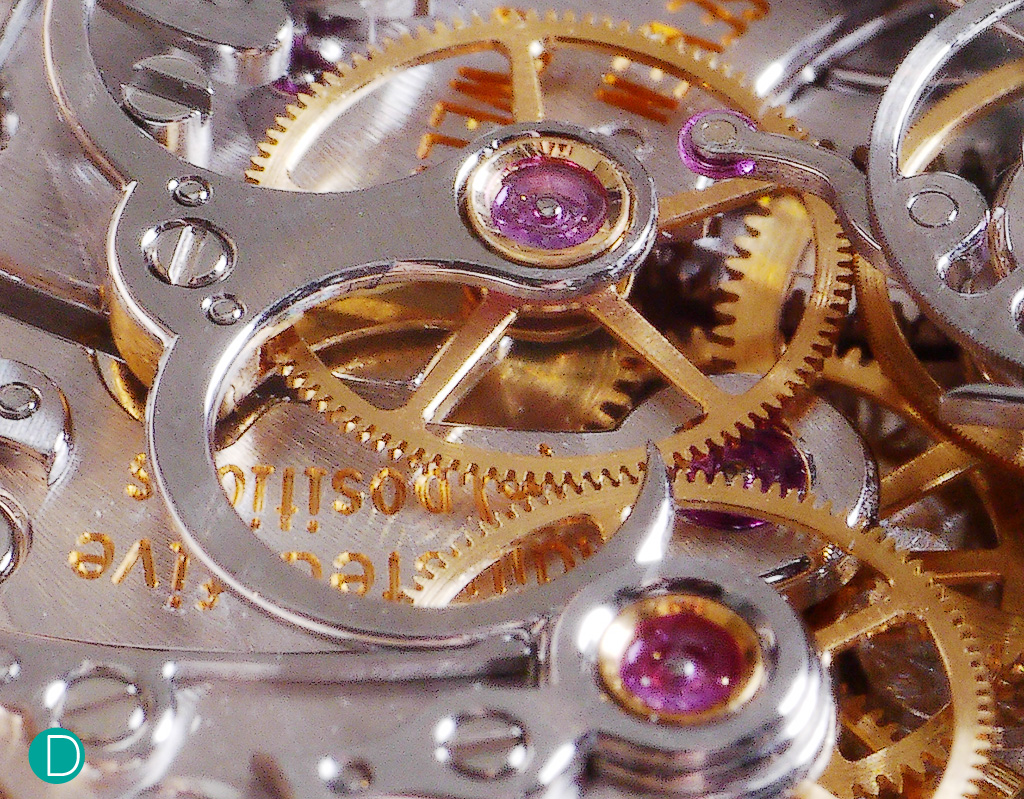 The friction coupling system which is used when the chronograph is activated, engages the constantly rotating intermediate wheel (directly coupled to the fourth wheel on the train) to the chronograph wheel.

These actions are coordinated by the column wheel. As a design bonus, both column wheel caps are decorated with the VC Maltese Cross. Note the high level of finishing on each of the plates and chronograph works. Chronograph works are made of steel, harder and more difficult to finish than the brass used in the movement plates. Note that all edges, even on the steel chronograph levers are polished, and anglaged. Another worthy example is the shape of these levers, which feature many inward and outward angles which can only be executed by hand. Of course all the openings for the screws are chamfered and polished. Also of note is that all the jewels on the chronograph works are attached with chatons onto chamfered openings. The tourbillon. Vacheron Constantin tourbillons are designed with a cage in the shape of their iconic logo.

Aesthetically faultless, the design of the VC tourbillon cage is in the shape of their iconic Maltese cross logo. Execution is equally faultless. Note the tourbillon bridge, which cut from a single piece of steel, with its arms rounded into a gradually conical shape, and polished to a mirror finish. Note also the tourbillon carriage itself is polished to a black specular finish. The sharp inward angles on the cage is also quite spectacular.

Special features of the Harmony series

The Harmony series of watches feature special engravings on the balance cock, and the winding rotors. These engravings are executed by master engravers, who not only display great skill in their works but also restraint in not over filling the surfaces with engraving. This keeps the filigree to an aesthetically pleasing level. The balance cock is hand engraved with beautiful patterns. These are free hand engraved by master engravers and feature only on the 260th Anniversary pieces of the Harmony Series.