The World Cup season is here again! The competition, which is held once every four years, gathers some of the best football players in the globe to compete against one another. This year’s tournament is held in Russia.

For those who are unfamiliar, the World Cup is a competition amongst 32 national teams that qualified for it. The matches will be first played in group stages, before the top 2 teams from each groups will compete in the knock-out rounds that follow subsequently. The traditional powerhouses in the competition includes Brazil, Germany, Spain, and France. However, this year, there were some pretty interesting and unexpected results that had shook the football world. That certainly made the World Cup even more exciting.

There are definitely some ardent fans who would travel to Russia to catch the matches in person. Hence, for this week’s article, we are going to recommend six watches that you can wear to watch the World Cup in Russia. What have we chosen? Let’s find out! We kick-off the article with a solid timepiece from a renowned Japanese watch manufacturer: the Seiko Automatic Divers “Padi Edition”, Reference SRPA21.

Seiko is known to make solid and reliable timepieces, and the Divers range is one of the best offerings that they have in terms of value proposition. This particular piece, which was based on the “Turtle Divers” that they had produced in the past, is no exception to that. The 45mm timepiece comes with a solid metal case and bracelet, and it is powered by the robust self-winding Calibre 4R36. The latter features a day and date indicator function, and it has a power reserve of around 41 hours.

Priced at S$667.70, it is certainly one of the most reasonable diver’s watch that possesses such qualities and characteristics. It is definitely a timepiece that is reliable for all occasions, and one that you don’t have to worry about especially when you are in a place that is as crowded as the football stadium. The new Casio G-Shock GMW-B5000, which is the first in the “5000” series to feature a full-metal construction. Picture courtesy of G-Shock.

Continuing on the theme of Japanese watches, we have the new and extremely popular G-Shock GMW-B5000.

The GMW-B5000 is the first watch in the “B Series” collection to feature a full metal construction. In our opinion, this is one of the coolest G-Shock that we have seen for a while. While the usual G-Shock with vulcanised rubber looks rugged, the GMW-B5000 brings it to the next level, with its solid-looking stainless steel case and bracelet.

In addition to that, the GMW-B5000 is a rather functional watch too. The watch, which comes with the “Connected Engine” module, connects to a local time server via a paired smartphone and radio wave to ensure that its keeps time accurately anywhere in the world. There is also an alarm clock and world time display on top of that.

This is a nice G-Shock to add into a collection, and it is definitely one excellent travel companion as well. It is priced at S$799. 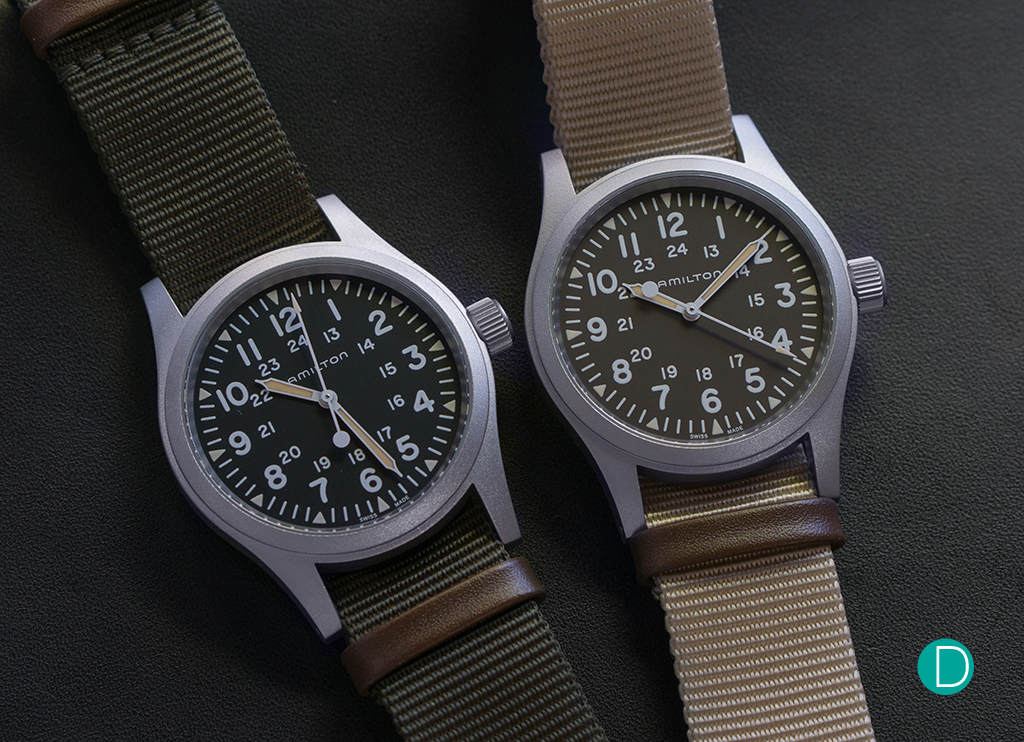 Hamilton has always been a brand that is under the radar, sans a few interesting pieces such as the ODC X-03 “Tribute to Interstellar and 2001: A Space Odyssey” and the Jazzmaster Face-to-Face II. However, it seems like the new Khaki Field Mechanical 38mm might be a potentially interesting piece in the collection.

Launched in this year’s Baselworld 2018, the no-frills Khaki Field Mechanical 38mm had certainly caught the eyes of the press and collectors alike. What makes this particular watch interesting is the combination of a classic military design, combined with a basic appearance and the use of a hand-winding movement. The latter is especially appealing for many of us, because many watch enthusiasts tend to prefer the “physical interaction” from winding the movement.

With an attractive price point of S$690, we have no doubts that the Khaki Field Mechanical 38mm is a timepiece that will prove to be popular with many collectors. This is a very simple and nice timepiece, and it is surely a good option for someone who is looking for a casual and understated watch to wear on a trip. The BR V2-93 GMT is one of the latest inclusion into the Bell & Ross vintage line. The 41mm timepiece, which draws some of its signature cues from the Instruments collection, definitely contains some aspects to be a wonderful traveller’s timepiece.

First and foremost, what we do like about this Bell & Ross is its simple and legible dial layout. It has a really clean display, which allows the user to read the time off the watch easily. In addition, the hands – especially the orange GMT hand – is large and conspicuous as well. This is certainly a plus-point for collectors, especially those who might have difficulties in reading the time off complicated or smaller watches. Next, the GMT hand is easily adjustable independently, and it can be quickset by the hour. Finally, there is also an additional rotating bezel to display a third time-zone, which can be a nifty feature for some collectors.

The watch is powered by the self-winding Calibre BR-CAL.303. This is a stock factory movement, with a date indicator function and a power reserve of around 40 hours. It is available in both rubber strap and stainless steel bracelet option, and they are priced at US$3,250 (approximately S$4,414) and US$3,500 (approximately S$4,754) respectively. In the world of football, the Germany national team is a force to be reckon with. The same can be said for their watchmaking industry as well. The region of Glashütte in Germany is home to some of the best watch manufacturers, and over the years, they have built such a strong reputation that the world of horology is beginning to sit up and pay attention to them.

NOMOS is one of the brands from the region that had caught the eyes of many in recent years. The Glashütte-based watch manufacturer is known to produce in-house movements at reasonable price points, and its Bauhaus-inspired design style makes it a huge crowd-pleaser as well. The Zürich Weltzeit is our pick from this manufacturer for this week’s article. The watch features a world time function, in which it allows the user to tell the time of any city (or time zone) as indicated on the rotating disc. The pusher at the 2 o’clock position allows the user to switch between the different cities, and hence making it simple and intuitive to operate the feature.

The watch is powered by the in-house DUW 5201, a self-winding movement that boasts a power reserve of around 42 hours. The finishing, notably, is rather decent for an in-house produced timepiece at this price range. Prices begin at S$7,820, with slight variations in prices based on dial variants. The new Rolex GMT-Master II is certainly a handsome-looking piece.

Finally, we round up the article with Rolex’s GMT-Master II.

The GMT-Master II collection had first debuted in 1954, at the request of Pan American Airways for its pilots. The two-colour bezel insert – consisting of both red and blue – had slowly turned into an icon, although there were many other iterations that followed subsequently. The red and blue bezel insert, commonly known as the “Pepsi”, was discontinued when Rolex launched the new GMT-Master II with the ceramic bezel insert. It was until recently in Baselworld 2018 that the Geneva-based watch manufacturer had decided to bring back the iconic combination – much to the delight of collectors.

The new GMT-Master II “Pepsi” is equipped with the new Calibre 3285. The movement now features an impressive power reserve of approximately 70 hours, and it is fitted with the Chronergy escapement that is said to be 15% more efficient as compared to the traditional Swiss lever. It is also subjected to Rolex’s Superlative Chronometer standards, in which the watch is supposed to deviate less than 2 seconds per day.

It is priced at S$12,430, although we have to admit that the waiting list for this piece is going to be long. The “Pepsi” is certainly an iconic piece, and we reckon that this workhorse is versatile and useful enough to be an appropriate travelling companion.

In today’s article, our selections are based on (i) modestly priced and solid watches, as well as (ii) watches with a dual time-zone function.

The rationale for the first choice is simple. If the watch is stolen or damage, at least a modestly priced watch would not hurt as much as say, a sub-S$10,000 timepiece. It is important to consider that, especially since one might not know the place well, and a crowded place like a football stadium might be a recipe for disaster when it comes to expensive watches.

However, for those who can manage their possessions, we’d recommend slightly more sophisticated pieces with a dual time-zone function. This is because the complication is functional, and it is certainly important for travellers who might need to keep track of multiple time-zones for work or business-related purposes.

So, what are some of the watches that you’d wear to a World Cup match? Let us know in the comments section below!