Father’s Day is around the corner, and it is certainly an excellent time to show your appreciation to your father with a thoughtful gift.

There are, of course, many gift ideas that one can think of. But what if your father is a watch collector? Surely he will welcome a new addition to his collection – be it a big incoming, or a small and reasonably-priced timepiece. After all, it is the thought that counts, right?

Hence, for this week’s article, we will be selecting six watches across various price points that works as a wonderful Father’s Day gift. What have we selected? Let’s find out! The new Apple Watch 2, featuring Mickey on the dial.

For the tech geeks, we have the perfect timepiece – the Apple Watch Series 2.

When the Apple Watch was first launched in 2015, it had generated a lot of hype and buzz. It was Apple’s first attempt at producing a smartwatch, and its sleek design and excellent features combine both form and functionality beautifully.

The Apple Watch offers many great applications, such as communication tools, health tracker, as well as a digital assistant. The only drawback, however, is its short battery life of around 18 hours.

Notably, the watch is available in a variety of strap options, and prices begin at S$269 for the Aluminium variant. 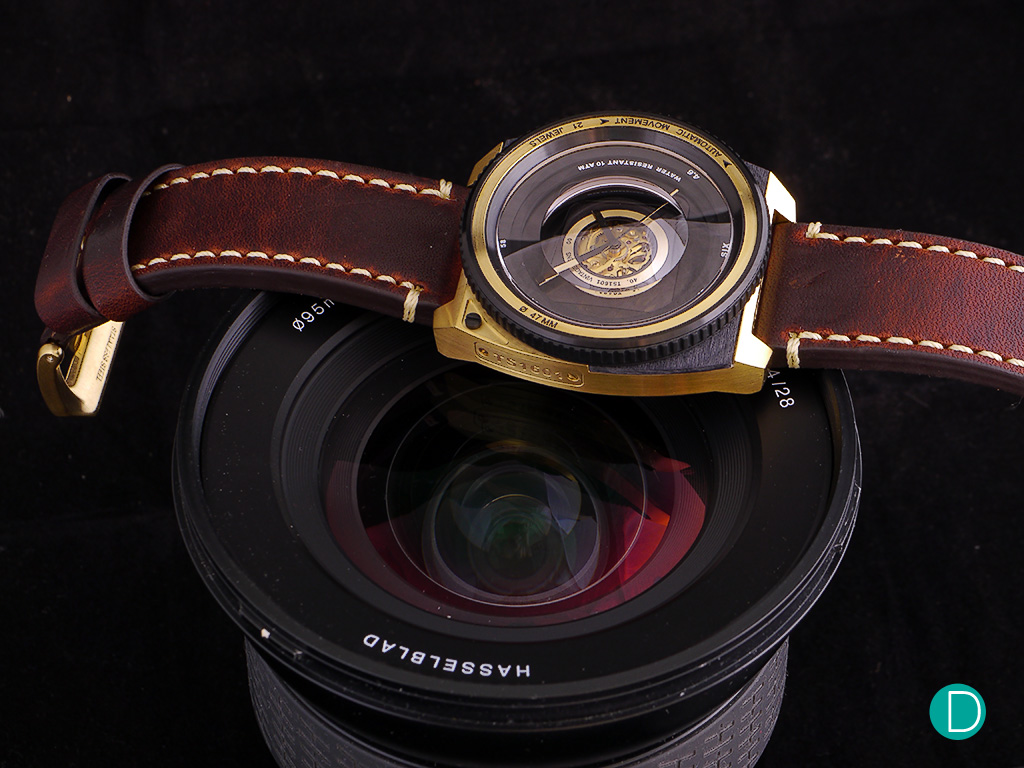 The TACS Vintage Lens on top of the Hasselblad HCD 4/28mm lens. The sapphire crystal of the watch face mimicks the impression of looking through the barrel of the lens.

Moving on, we have the perfect watch for a watch collector who likes photography as well. How about the TACS Limited Edition Vintage Lens Watch, by Yoshiaki Motegi.

The inspiration behind Yoshiaki-san’s works are the principles of kenshō (見性), seeing one’s true nature, and mujodo no taigen, expression of this insight in daily life. This has resulted in a timepiece that was inspired by old camera lenses. We particularly like how the watch replicates a camera lens so closely, with its multi-layered dial, the various inscriptions, as well as a rotatable bezel. It is certainly an interesting timepiece.

The 47mm TACS Vintage Lens is available in both quartz and automatic movement. We definitely prefer the latter, in which it is powered by Miyota’s 82S0. It is a limited edition of 500 pieces, and it comes with a reasonable suggested retail price of US$550 (approximately S$760). The Longines Railroad – a throwback to the watches of the yesteryears.

We have a soft spot for the Longines Heritage series, and some of its watches have really impressed us tremendously with its price point and aesthetics. One particular model that have captured our hearts is the Railroad – which is based on a similar timepiece that was in the Longines catalog in the 1960s.

As its nomenclature suggests, this watch is intended for railway men to plan and work out train schedules. These watches need to be extremely accurate – any error might potentially result in a catastrophic train accident. Of course, in today’s age, the need for such devices is reduced, though the fascination for them have not diminished one bit.

The new Railroad is definitely a faithful reproduction of the original model, sans a few subtle modifications. This includes minor detailing on the dial, as well as the use of a modern movement (the self-winding Calibre L888.2, or also known as the ETA A31.L01). The 40mm timepiece is simple, but it is a good-looking timepiece with a tinge of nostalgia. It retails at S$2,700, and it is certainly something that will appeal greatly to dads who might have worked in the railway industry in the past. Timepieces and motor racing goes hand-in-hand with one another, and the Chopard Mille Miglia 2017 Race Edition might be an excellent Father’s Day gift for dads who enjoys motorsports or cars in general.

The Mille Miglia collection, interestingly, was born out of Karl-Friedrich Scheufele’s love for cars. Every year, in commemoration of the Mille Miglia race, Chopard produces a new model for each edition of the race event. This year, they launched the 2017 Race Edition. The watch is different from its predecessors as it takes its design cues from the elements of a vintage car. Some of these elements include the car engines, fuel cap, and dashboard.

It is indeed a masculine piece, with its massive presence amply demonstrated in a 44mm case diameter. In addition, the watch comes with its signature “tyre thread” motif rubber strap, which adds some racing pedigree to the watch. The watch is priced at S$6,840, and it is limited to a production of 1,000 pieces. It is not every day that Rolex produces a timepiece that is radically different from the rest of its collection. But in Baselworld 2016, Rolex surprised many collectors with the new Air-King, inspired by Rolex’s ties with aviation since its golden age in the 1930s.

The Air-King is a love-it-or-hate-it timepiece. Perhaps the graphics are very loud for the typical Rolex. But for us, we like how this particular Rolex is rather different from their other watches. The combination of the typeface used in the hour and minute markers is intriguing, and the use of green and yellow colour on the dial (and the centre second hand) adds a nice touch to the watch.

The 40mm Air-King is powered by Rolex’s self-winding Calibre 3131, boasting a power reserve of around 48 hours and an accuracy of around -2/+2 seconds daily. It is priced at S$8,340, it offers an entry level model to the Rolex sports line and certainly a solid piece to include in any dad’s watch collection. Finally, we round up the article with one of Jaeger LeCoultre’s novelties from SIHH 2017. Cue the new Master Control Chronograph Steel.

The new Master Control line from JLC is rather interesting, especially with its design featuring the unmistakable sector dial. Aside from that, the Master Control Chronograph is pretty simple in its design. We also like how JLC used a bi-compax layout for its sub-dials, which adds a classic touch to the watch itself. It is also less cluttered, which makes the watch much more aesthetically pleasing as well.

The watch is fitted with the in-house Calibre 751G, a self-winding column wheel chronograph movement. The watch also features a double barrel system, which allows it to boast a decent power reserve of around 65 hours. The finishing is rather decent too.

While the watch is sized nicely at 40mm, but its thickness of 12.1mm might not be ideal for some. Nonetheless, the Master Control Chronograph is definitely a stunning timepiece, and its price of US$8,000 (approximately S$11,075) is reasonable for a timepiece of such quality.

In this week’s article, we have covered quite a decent spectrum of watches that we think are excellent as a Father’s Day gift. Some of these watches are certainly great choices, considering that they tie in with other elements as well – such as photography, automotive, as well as technology. One example is the TACS Limited Edition Vintage Lens Watch, in which it combines both horology and photography into a tasteful timepiece. In addition, the price points for most of the watches here are rather attractive too.

Let us know what are some of the watches that you have purchased for your dad (or received from your son) over the years, in the comments section below. Also, on that note, we would also love to share that the Maurice Lacroix Father’s Day Watch Giveaway is ending soon. If you have not purchase a Father’s Day gift, that is perhaps something that you’ll definitely want to look at as well!